The Young Typospherian Who Could 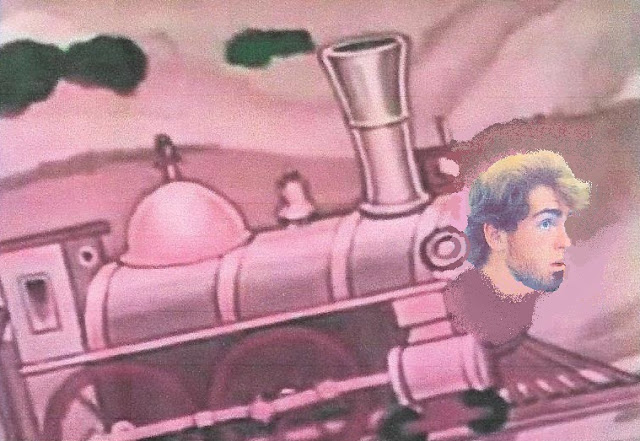 Twenty-year-old Jasper Lindell, the Typospherian who has exhibited his typewriting skills from Canberra to the cantons of Switzerland, and from Sydney to Swinger Hill, has fulfilled a long-held ambition to work full-time in the print newspaper industry. On August 28 Jasper was interviewed as one of 20 applicants for a cadetship at The Canberra Times and on September 18 he got the call to say he had been awarded one of only two openings. After a short introductory training session with Fairfax Media in Sydney, Jasper started his journalism career at the Times on November 26 and within days was scoring page 2 bylines. Yesterday his byline appeared on the page 3 lead article. One notable "scoop" concerned the capture of a python in the Museum of Australian Democracy (Old Parliament House) - most appropriate for someone who's a big fan of the Monty of that species.
When Jasper announced his appointment on Facebook, one friend responded: "Congratulations Jasper - you were destined for this role. Which typewriter will you be taking to the office?" To which Jasper responded: "I reckon this will do." 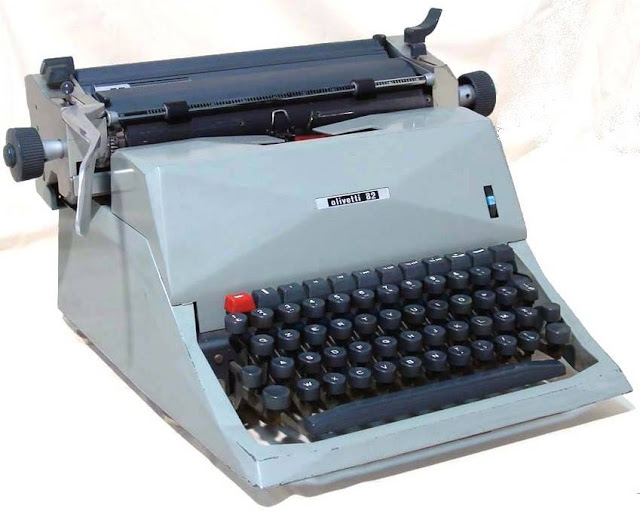 It's almost certainly no coincidence that this was the very model of typewriter which was once the stock work tool at The Canberra Times. 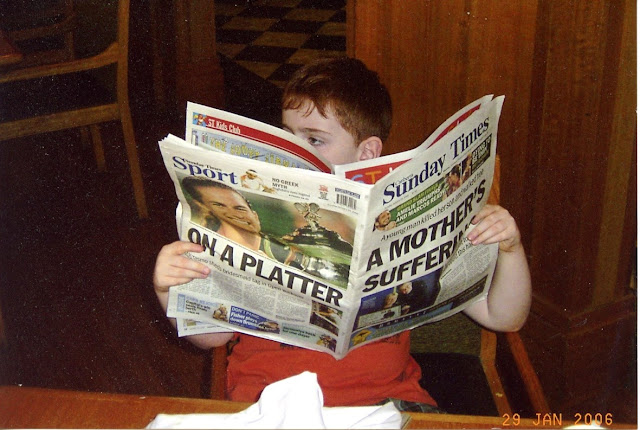 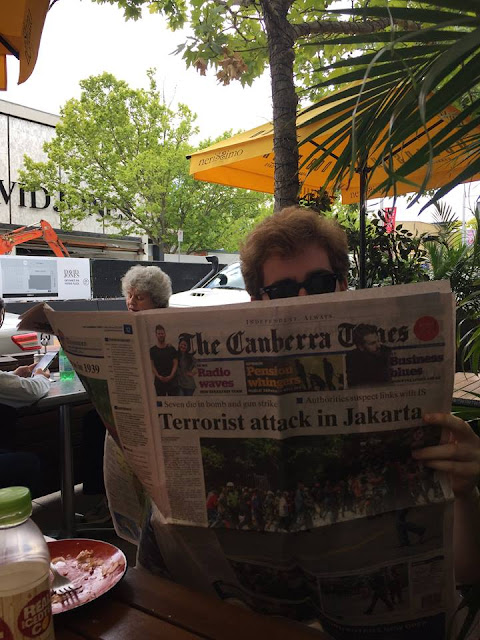 Jasper reading the last broadsheet edition of The Canberra Times, July 15, 2016.
He called it a "travesty" and a "sad day".
For him, broadsheets were a "glorious, tactile experience".
Jasper has had his nose stuck in newspapers since at least the age of seven, and for much of the past 13 years has dreamed of not just reading the printed pages, but of writing the copy that appears on them. For more than six years now, he has also been an enthusiastic typewriter collector and user. His blog DHIATENSOR (by which the Blickensderfer keyboard layout is known) has been moribund since 2016, but in that time Jasper has been concentrating on attaining his professional goal (although anonymous donors kept leaving typewriters on his doorstep): 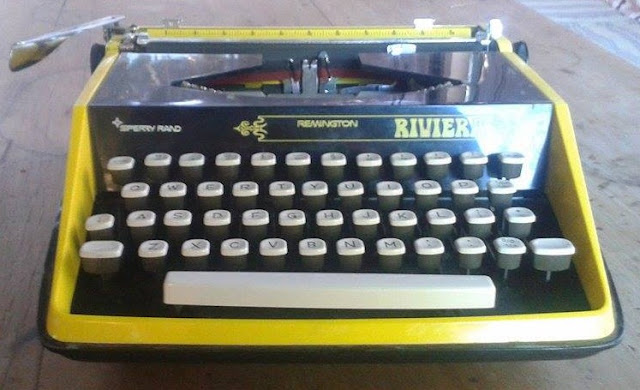 Jasper was editor of his school newspaper, the Orana Steiner School's Student's Standard, and in August last year, while editor of the Australian National University's student newspaper Woroni, won his stripes with his coverage of a scoop that quickly became a nationally breaking news story. He'd previously started writing for The Guardian Australian edition and in 2016 became the youngest person at a Federal Government Budget lock-up - a year later the Government denied him accreditation, which the fearless and outspoken Jasper put down to it "announcing its controversial university reforms".

Given an already highly impressive track record in journalism, it's astonishing to recall that while he was visiting leading typewriter historian and collector George Sommeregger in Switzerland in March 2014 (while on a student exchange trip to Germany), Jasper applied for but missed out on an internship at The Canberra Times. To its credit, that newspaper has now seen the error of its past ways, so cheers to the "Crimes". 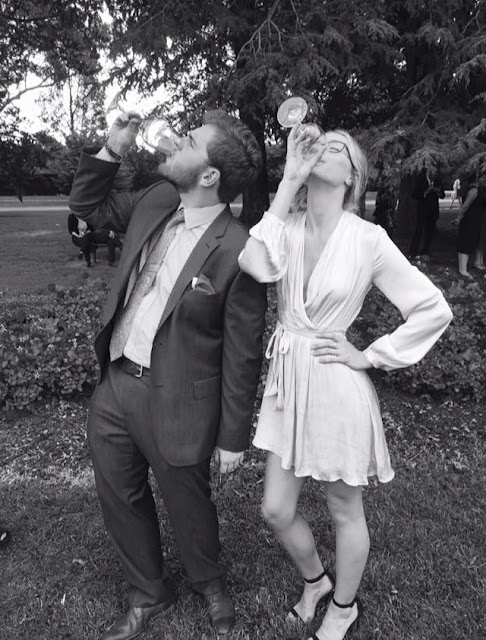 To its eternal discredit, the Times, a fortnight into Jasper's cadetship, assigned him to check out Canberra's high birth rate, saying, "We sent the baby of our newsroom, new trainee Jasper Lindell, to take a closer look at the boom." Oh dear, what a condescending comment about someone who has entered the joint far more roundly experienced than most of his colleagues! As proof of that, and among the many efforts which helped change the mind of Times management about Jasper, was this opinion piece, which appeared in both the Times and The Sydney Morning Herald on his 18th birthday, before he'd even started his university studies: 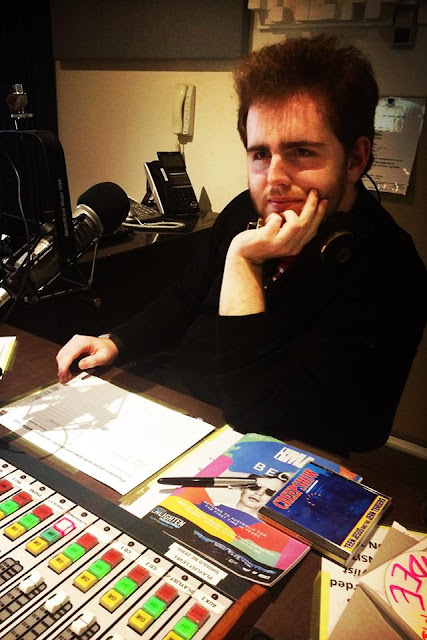 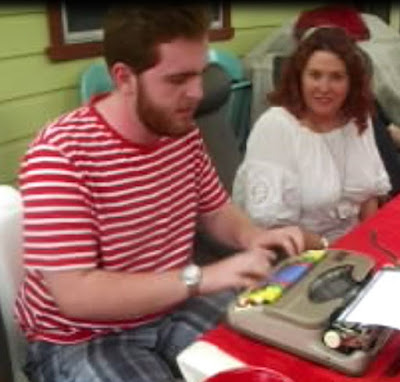 Jasper has persisted - and ultimately succeeded - in his long pursuit to become a print newspaper journalist, in the face of clear evidence of a rapid worldwide decline in his chosen profession. Jasper has all along been only too well aware of the failings of modern newspapers, and yet it hasn't deterred him, nor is he now daunted in leaping into the cesspit. Good luck to him! Maybe, just maybe, he will be an example to other youngsters, in his offering of new blood to a dying trade. But Jasper is without doubt exceptional. It's not just the short-sighted tight-fistedness of media owners which is killing journalism, it's also a failure in our education systems and the emergence of a generation of youngsters far less interested in reading hardcopy - books, magazines or newspapers - or in words and writing in general and politics and climate science in particular, than they are in technological faddery. For most of his life Jasper has been encouraged to learn, read, write, discuss things knowledgeably and openly, and to not shun old formats or technology.  In turn, he has himself encouraged others in these things. May his journalist career flourish!
Posted by Robert Messenger at 14:28

Wonderful story about a great young man. Thank you, Robert.

Great to see he is succeeding in his chosen career. He's got some great points in his article that are very fitting for the USA.

Congratulations, Jasper! You were born for this! Long may you type.

Robert, thank you for this beautifully written piece. Paula and I are very proud parents and often marvel at his successes, although you may know that there is nearly always a plan in the back of his mind. This plan has been no secret though, and has been fantastic to watch it unfold.
There are some great people who have encouraged and supported him on this journey, and we must publicly recognise your contribution to that. Your personal experiences and realistic point of view have no doubt shaped his aspirations and given him some great tools to have at his disposal in what we hope will be a fulfilling career in print journalism.
Jasper will no doubt be horrified that I’ve made a comment about your post, but your contribution to this outcome cannot be understated.
And thank you also to the many typospherians who have encouraged him - lovely that he is part of such a great collective.
Thank you, John and Paula.