Vice: Not So Much a Film Review as a Reaction

Just before the end of Vice, mid-credits, a focus group discussion about the film script’s political bias breaks out. The camera moves away from “Libtard” and the “Orange Cheeto” (Trump) supporter belting crap out of each other on the floor to two young women at the other end of the circle. One turns to the other and says, “I can’t wait to see the new Fast & Furious movie. It’s going to be so lit.” Given this scene comes at about the 127-minute mark of a 132-minute movie – and a lot of the audience has already walked out - it’s remarkable that it is evoking so much outrage among critics. “ [It’s] so rancid, and such a bad-faith attack on the film’s assumed audience, that it makes an already lousy movie even worse,” wrote Sam Adams on Slate. “It’s not often that a few seconds of footage has the power to retroactively poison an entire film.” Perhaps Adams missed an earlier scene, in which the same Fast & Furious fan asks the group leader whether Al-Qaeda is a country.
We went to see Vice yesterday afternoon, as much to beat the heat on another 99-degree day as to watch a movie we’d been encouraged to see, a week or so earlier, by its trailer. Luckily, the day before going to Vice we’d been swimming to beat the heat with a friend who’d already seen the film, and who recommended we stay in our seats until the curtain really did come down. Armed with that advice, we got to see not alone the focus group brawl, but the penultimate scene, in which Christian Bale, as Dick Cheney, breaks the fourth wall and addresses the camera with his self-justifying “I will not apologise for keeping your families safe. You chose me. I did what you asked” speech. Having seen out the movie to such a bitter end, our own response was much closer to Matt Goldberg’s review on Collider. Goldberg wrote, “Some people have taken umbrage with [the focus group scene], citing it as not only dismissive, but also hypocritical. It targets a specific demographic as somehow less socially aware, and then tries to blame entertainment like Fast & Furious … But my read on the scene isn’t that [director Adam] McKay is saying, 'If not for those darn Fast & Furious movies, people would have paid attention!' Rather, McKay is taking issue with two things: engagement and age, and the statistics bear him out on this.”
Goldberg is right and Sam Adams is very wrong. Vice is not a lousy movie, it’s actually quite a brilliant one. And it doesn’t take Goldberg’s stats – that just 46.1 per cent of people aged 18 to 29 voted in the 2016 US Presidential election, compared to 70.9 per cent of people in our own age bracket – to have McKay confirm for us our previously held perceptions of how Donald Trump came to be in the White House. After all, Vice isn’t just about Dick Cheney’s political career and his two terms as vice-president, it’s also a reinforcement of the view that abuse of power in office is still very much a part of the Washington DC landscape. A lunatic is back in charge of the asylum. In Vice, it’s an exploration of what is meant by what’s called “unitary executive theory”. Under Trump, it’s been simplified to “policy by impetuous Tweet”. 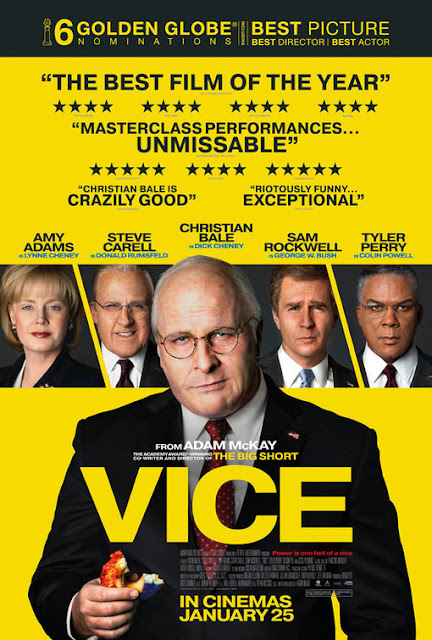 Of course, Australians are in no position to point fingers at America. Or to make judgments, for that matter. But you are still our close ally, a point which even Trump might be prepared to concede. And given we, too, got dragged - all too willingly, as it turns out - into Iraq and Afghanistan, and we also have devastating bush fires, can we still trust you? With that in mind, I guess it was no surprise that a packed house in the cinema yesterday afternoon sat in stunned silence throughout Vice – although far too many of them took the chance to bolt as soon as the credits started to roll, and missed the final dose of “retroactive poison”, as Adams calls it. I often try to get a feel for how an audience is reacting to a movie by its collective noise and movement, the restlessness or otherwise of the people around me. Yesterday there was not a sound nor a rustle. I took this to reflect a total absorption, if not a broadly gathered and held sense of shock and horror. The movie is described as a comedy-drama, yet I heard not so much as a titter. I suspect, like us, those around us were completely spellbound – simply by brilliantly clever moviemaking, if nothing else.
Christian Bale and Dick Cheney share a birthday: January 30. Bale should be celebrating, for his is surely an Oscar-winning performance. But Cheney, who turns 78 next month, provided his donor’s heart keeps beating under his thin skin? Probably not, given this film is as damning a condemnation of his Machiavellian ways as it’s possible to get.

Posted by Robert Messenger at 14:41

Thanks for this review (and the heads up about the focus group -- not really sure what to make of its inclusion; I'll have to see for myself). One wonders what Cheney himself thinks of the movie. My reaction is one of "it's too soon!" The world will be picking up the pieces of the Iraq adventure for a long time to come. Thanks, Dick.

Thanks for this perceptive review. Although your reluctance to point fingers or cast blame shows an admirable humility, this American says to go right ahead. Speaking the truth about what one sees is a right that isn't forfeited because of one's own faults.

Although Australians are far more knowledgeable about the US government than Americans are about almost anything Australian, I wonder if any world citizen -- at least in countries whom our country didn't actually attack -- can know just how bad these guys really were, upending fundamental American ideals with an open contempt for those who would uphold them. (I grew up knowing that whatever our arrogance in places like Vietnam, Chile, Iran, Americans would never, could never, torture as a matter of policy.) How they made me, a moderate left-winger, yearn for the days of decent leaders of the right like Hoover, Eisenhower, Ford, and even the elder George Bush (under whom Dick Cheney, not yet fully sinister, served as Secretary of Defense).

I look forward to the movie very much.