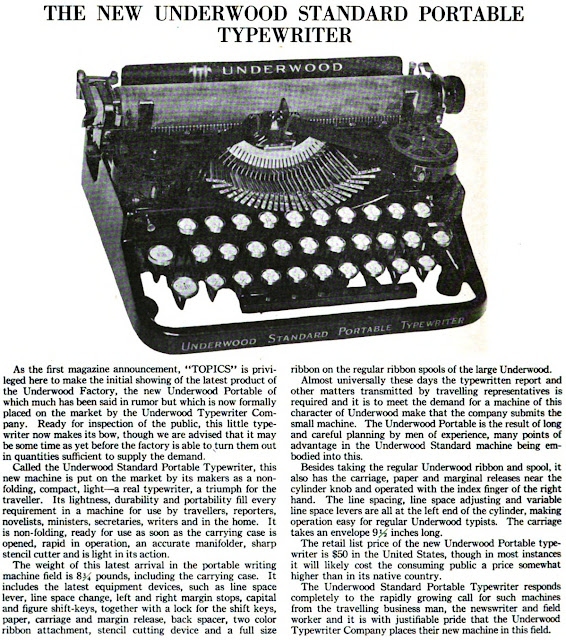 In its first editorial of 1919, Typewriter Topics forecast the “unprecedented demand for portable typewriters” would go on unabated. In another accurate prediction, it added that, because of “enormous government purchases” during the 1914-18 World War, portable typewriter manufacturers would need at least a year – until 1920 – to catch up with production demands for public supply, even with their plants operating “at full speed”.
What Typewriter Topics was unable to allow for in January 1919 was a nine-week strike at Underwood’s Hartford, Connecticut, factory. The stoppage, from July 15 until September 15, cost Underwood the production of 40,500 machines over 54 days, and at a profit of $25 a machine, that added up to a loss of $1,012,500. With up to 900 of its 4100 workers out, Underwood closed the plant on July 22. Another 1110 employees joined the strike on August 9. 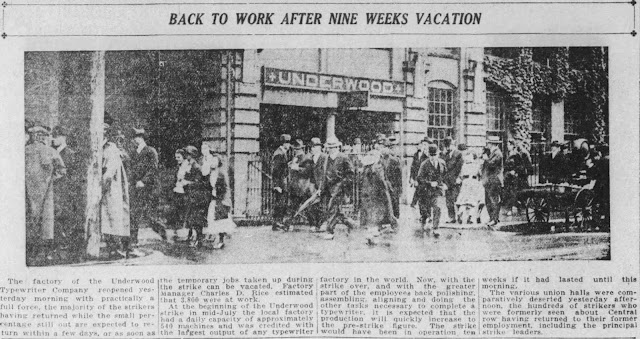 Hartford Courant, Tuesday, September 16, 1919
The Underwood strike caused a typewriter shortage throughout the US and delayed the introduction of Underwood’s first portable until late October 1919. Planning for the 8¾lb Underwood portable had started in December 1917, after the company had finally recognised a vast opening in the new market created by the Corona 3 in 1912. Underwood had spent almost two years strenuously testing the dependability and serviceability of the compact non-folding three-bank, which had been designed by Lee Spear Burridge just before Burridge’s death on May 4, 1915. 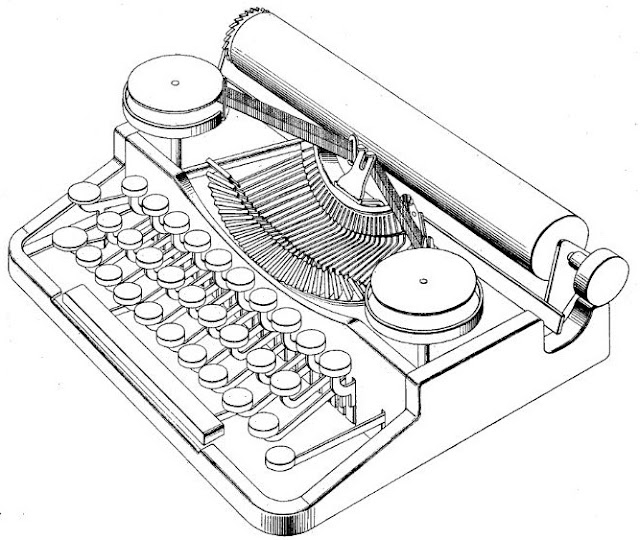 January 28 this year will mark the centenary of the first patent (USD52907S) being specifically granted for Burridge’s wonderful little typewriter. The application for a patent on the mask of the machine had been made on July 27, 1918, by Frank Burridge, Lee’s brother and the executor of his will, and was assigned to Underwood. An application for a patent on the mechanics (US1297085A) was made on September 25, 1915, and granted on March 11, 1919. A further patent (US1322530A) was issued on November 25, 1919, a month after the portable had first gone into production.
Considerable ground in the marketplace had already been lost by Underwood, and not just because of the prolonged strike. Realising, as Typewriter Topics had done early in the year, that 1919 was “The Year of the Portable”, many other designers and manufacturers had moved quickly to challenge the stranglehold gained by Corona during the war years. 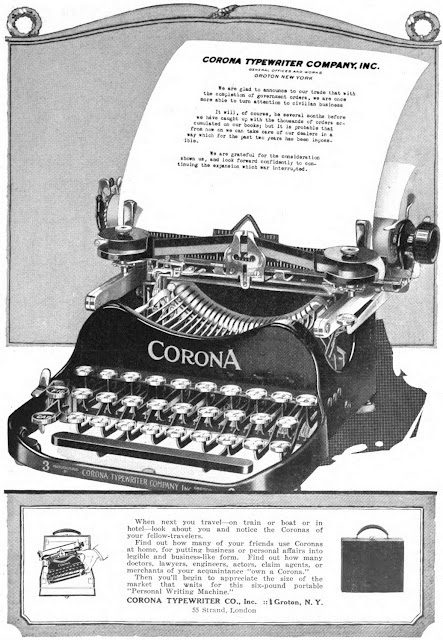 As Typewriter Topics said in January, “Probably no commodity has ever won its way into public favour so rapidly and so surely as the portable writing machine. Irrespective of the genuine demands existing for such machines, the manufacturers of portable typewriters deserve no end of credit for the splendid manner whereby they have practically created a new industry and educated and molded public opinion to the variegated and efficient uses of their products.
“The result is that a number of concerns are giving considerable effort to the production of portable machines, The oldest and largest manufacturer of such machines [ed, Corona] is operating at the fullest speed and rapidly becoming one of the best known manufacturers in America. The demands from abroad for portable machines is on a par with that of the larger makes … Where one dealer represents a portable machine, a half dozen in the same territory are looking for a similar commodity and at the present writing it seems as if manufacturers will never catch up with the demands.” 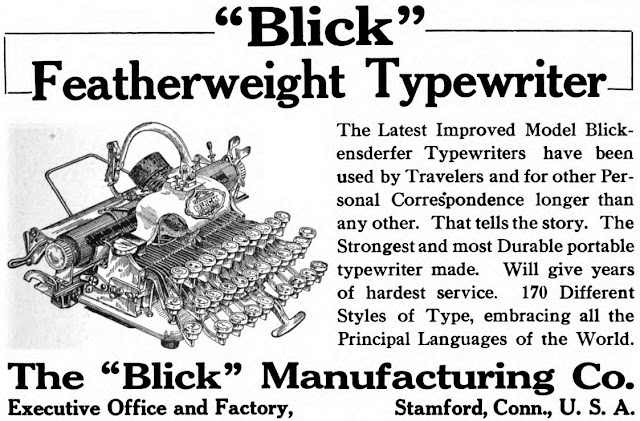 Typewriter Topics was right on the money. Heavy advertising for portables began in the same January 1919 issue and increased throughout the year, as new models came on the market. One of the heaviest advertising campaigns was for the 7lb “Baby” Fox 1, still then with its own version of a folding carriage. Another was for the Blick Featherweight, although with the death of the Blick’s creator, George Canfield Blickensderfer, in August 1917, the “Blick” Manufacturing Company was merely hanging on to the last vestiges of past glory. Already Lyman Resolved Roberts was preparing to cash in on the company’s name, and launched the 7lb Blick Ninety in December 1919. 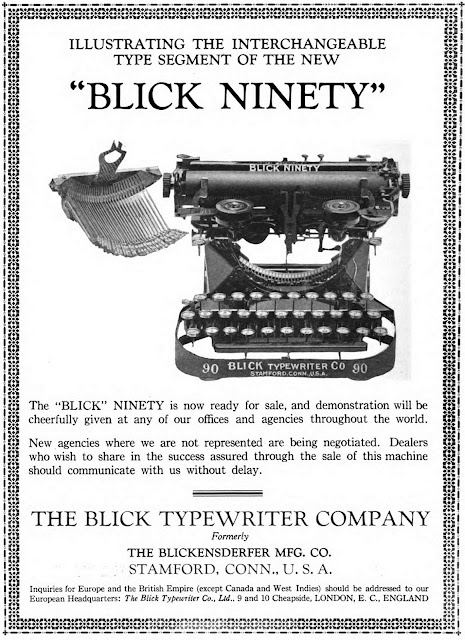 Both the Empire and Hammond were making claims about making portables, at 10½ and 11 pounds respectively, and in October a branch of Remington’s Union Trust launched a remodelling of the Remington Junior, the Century at a staggering (and barely luggable) 17½ pounds, almost three times that of a Blick or a Corona. At least the Molle (which “can be used as a portable”, its advertising claimed) was significantly lighter at 11¾lbs. By the end of the year Remington had its breakthrough four-bank well advanced in planning, and Visigraph was also talking about bringing out a portable. Corona, having set in motion the creation of this “new” industry, kept its head about the pack, saying in its 1919 advertising, “Portable typewriters may come and portable typewriters may go, but there can be but one Corona.” 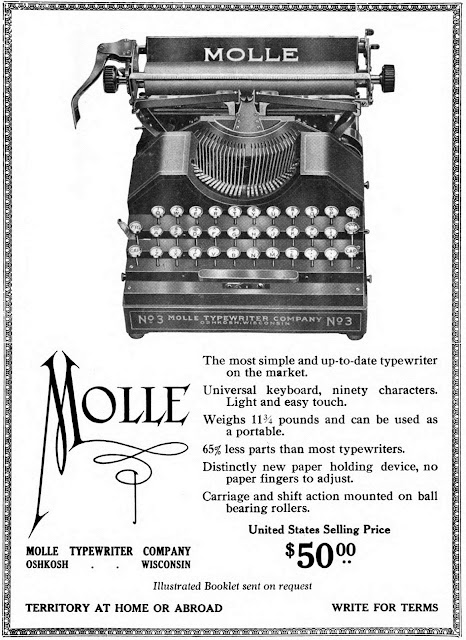 With Fox facing legal problems with Corona, and heavy financial losses as a consequence, and both the Blick and Roberts’ Blick Ninety destined to finish up in hands of Remington, another genuinely small, lightweight, compact portable comparable to the Corona was still badly needed.  Serious contenders did emerge in 1919, in the shape of the 9½lb National (designed by Chicago’s Hubert Knibloe Henry [1869-1930] and made by Rex in Wisconsin) in May and the 5½lb Garbell in November. Richard Ulhig also announced plans for his Allen in April. 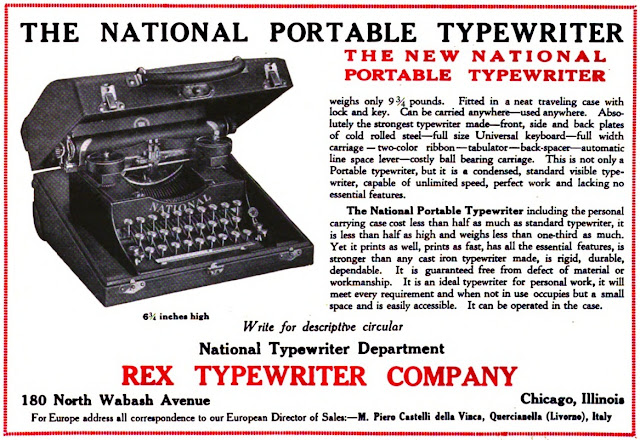 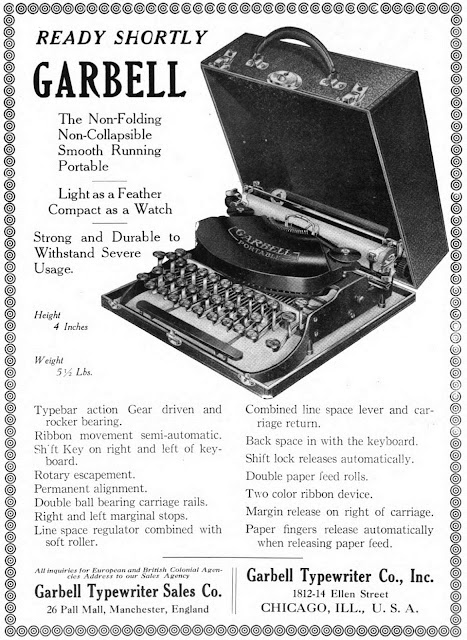 Confronted by this amount of emerging competition, Underwood could afford to hold off on its portable no longer. And the company had placed great faith in the non-folding three-bank. On November 8, 1919, The Wall Street Journal, reporting on Underwood’s 10-month business returns, said, “Large orders [for the portable] have already been booked, and deliveries will begin as soon as special equipment has been installed at the [Hartford] factory to enable portable machines to be turned out at a rate of 50,000 a year without interfering in the least with the making of 200,000 standard machines a year.
“Many in the company expect the portable model to take as commanding a place in that field as has the company’s large model among standard machines. The Underwood portable is strong, has a good type-bar action, its keyboard is not too compressed, and it sells for 25% less than do rebuilt standard machines at present. Consequently it is felt that the small machines will find ready sale for home use as well as to travellers.” 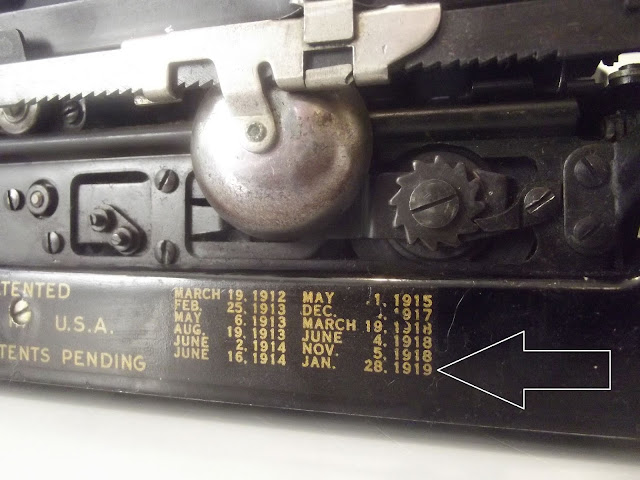 On December 13, the Journal reported, “Although Underwood production has returned to normal since the strike, the company is far behind in filling orders. It is understood that the New York office of Underwood is more than 4000 machines behind on delivery. The company is trying strenuously to catch up, and hopes next year to be able to raise its production to 220,000 machines. It is understood that at present the Underwood factory is turning out in the neighbourhood of 550 standard machines a day. Underwood portables are as yet appearing slowly on the market, but it is understood that a strong demand has already appeared for them.”
(On August 17, 1920, Underwood solved the problem of the maximum capacity having been reached at the Hartford plant by buying the Bullard Machine Tool Company factory in Bridgeport, Connecticut, specifically to make its portable there. The move ended further hold-ups in producing sufficient Underwood portables to satisfy market demand, which had persisted for more than a year. Portable manufacturing returned to Hartford in 1932. Underwood offered to relocate Bridgeport workers as well.) 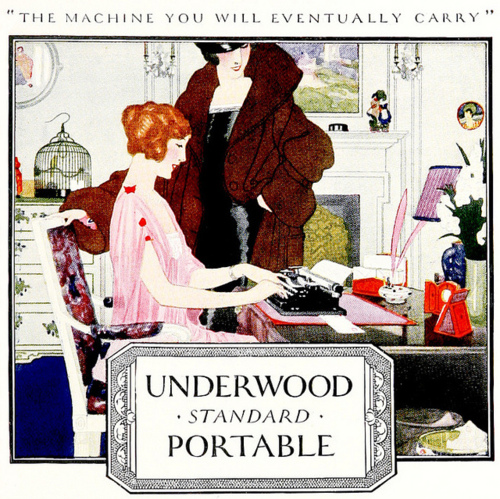 Typewriter Topics editor Ernest Merton Best told The Wall Street Journal at the end of October 1919, “A notable development [in the typewriter industry] in recent years has been the portable machine of type-bar design such as the Corona. For six years Corona sales have been large. Recently the factory has been increased to turn out about 80,000 machines a year. Within the last two years several other designs of portable machines have been put on the market. Last week the Underwood company began to sell a portable model, and it is said that Remington will put one out shortly. Several other companies are also considering portables. Competition therefore promises to be intense. But the demand for portables is increasing so rapidly that the new field will be able to stand it. 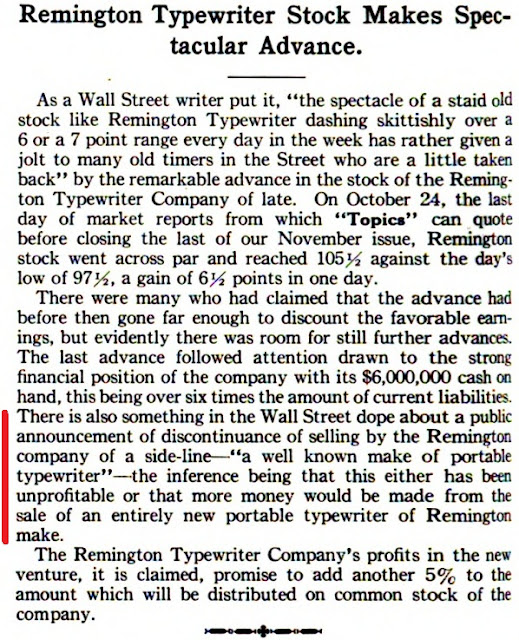 “The typewriter has made itself indispensable in the modern offices. Now, having invaded the traveller’s grip, it is beginning to enter the home. Rapid increase in use both of large and small machines can be expected. The possibilities of well-managed typewriter companies with machines of high merit therefore are alluring.”
Sure enough, on December 10 the Journal reported that Remington “will put out a new portable model of the general Corona type in the next few weeks. It is already busy making these machines, and just as soon as enough have been made they will be placed on sale at the different branches of the company.
“Earnings upon this portable model should be large as there is a greater demand for portable typewriters than can be supplied by the various makers at the present time, and the Remington company is understood to have an unusually good model in this new machine.”
TOMORROW: Part II – All Hail the Remington Four-Bank. 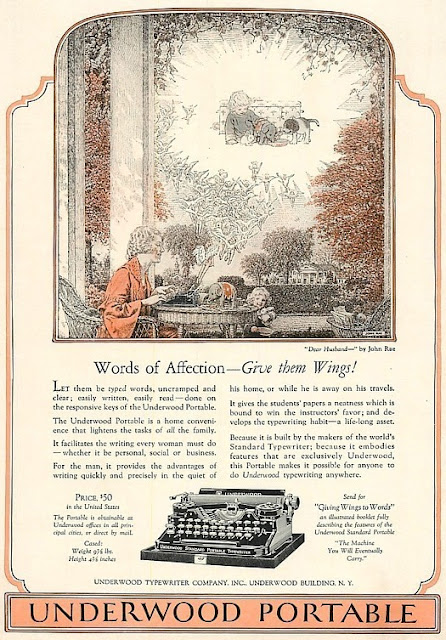 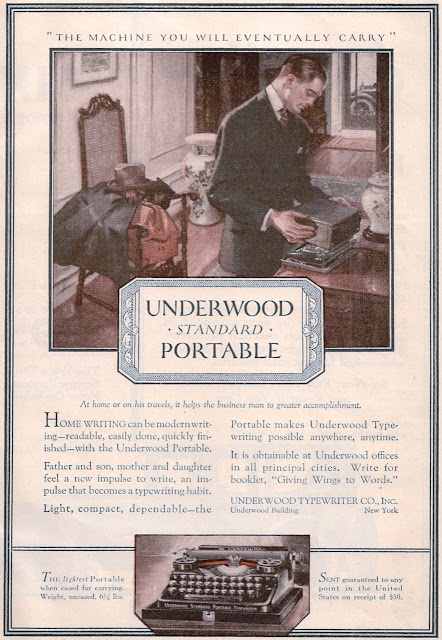 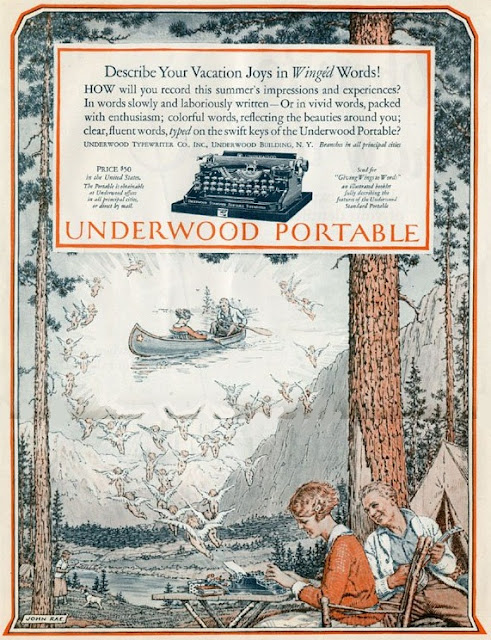 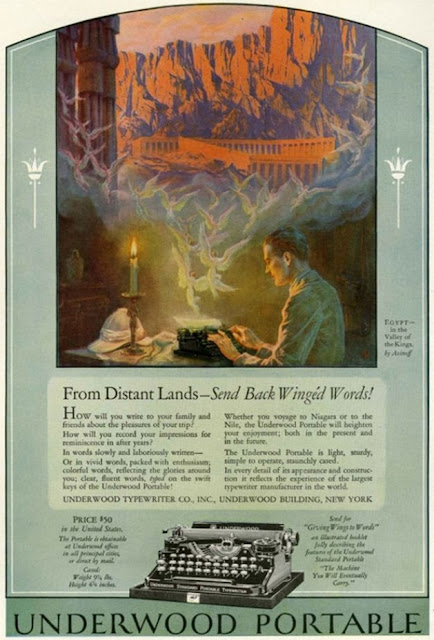 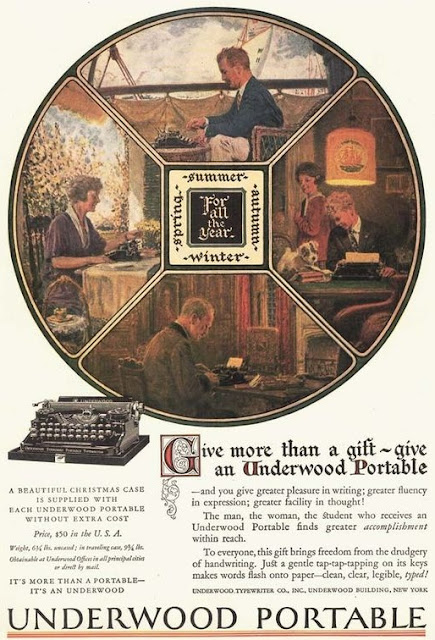 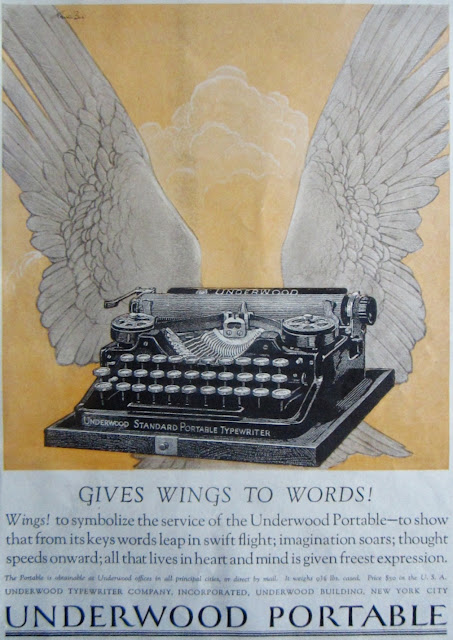 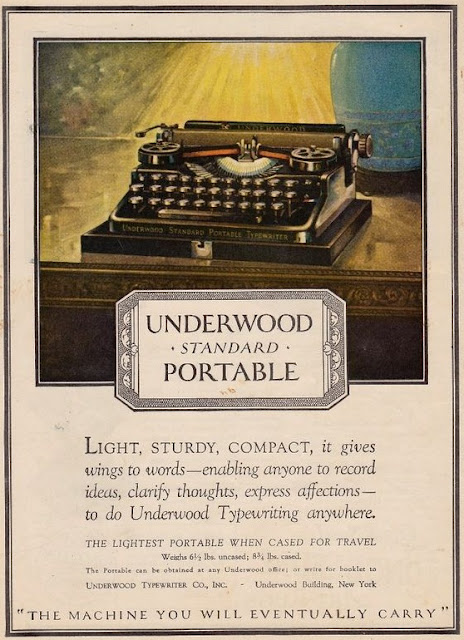 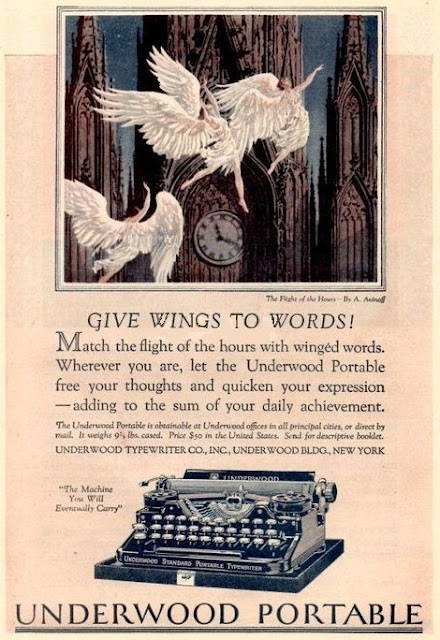 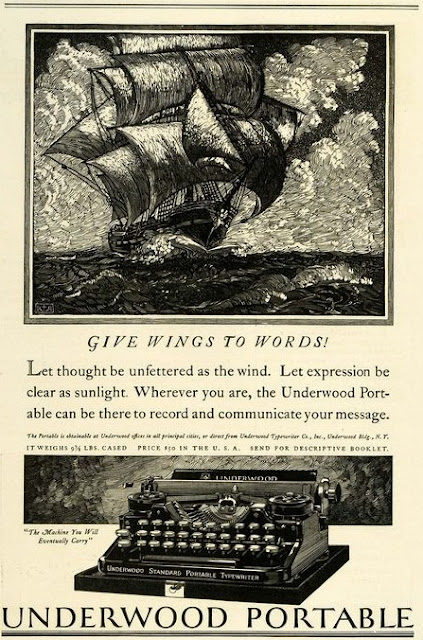 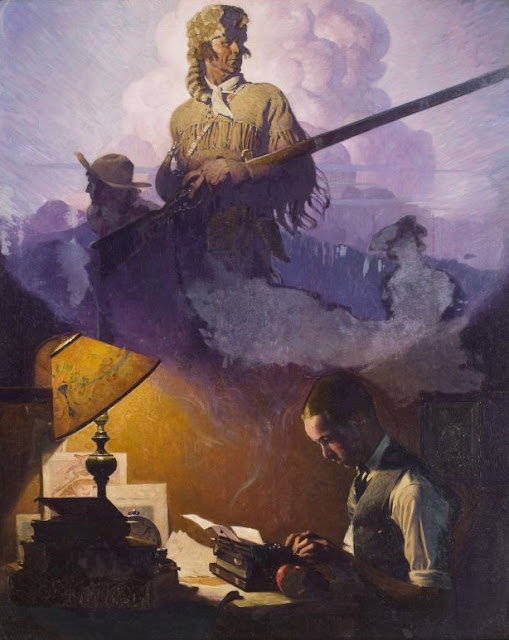 Posted by Robert Messenger at 10:43

I'd love to add a Blick 90 with interchangeable segment to my collection. I'm presently working on a really nice Underwood 3 bank. It actually works great except for a miss in the middle of each line. I suspect an escapement tooth is broken. Very nice history of the portables Robert.

Great stuff, Robert, as always. I hadn't heard of the strike at Underwood in 1919. (I'd love to get a 3 bank Underwood someday.)

Oh, I love to read something like this: "The Underwood strike caused a typewriter shortage throughout the US and delayed the introduction of Underwood’s first portable until late October 1919." and double-check the age list on the Database and see the first reporting on 3-bank construction be 195 machines in November 1919! It warms the cockles to see the lists upheld in contemporary historical reporting regarding the timing and expected volume. :D

Great theme for a series of posts! So Remington's abandoned "side-line" was ... what? The Blick 90?