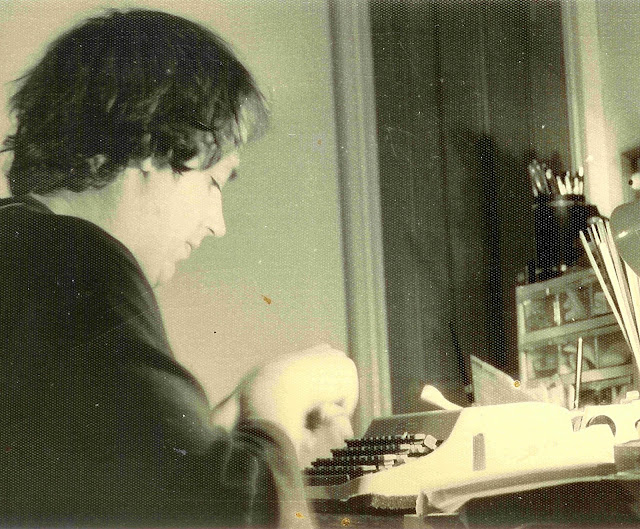 Comments on my last blog post have only succeeded in intensifying my thinking about the Olivetti Letteras 22 and 32 (no, Ted, you’re not missing anything; 1964 was definitely the year for the 32*). The overriding impact of the comments was to reinforce the general Typospherian view that typewriter preference is very much a personal choice. Bill likes his Skyriter or Montana and goes for portability, while Richard seems to prefer something a little larger (a Series 5 Smith-Corona, perhaps, or a Royal Quiet De Luxe?). But the topic of choice made me wonder: What range of typewriters did others have to choose one from, back in the day? 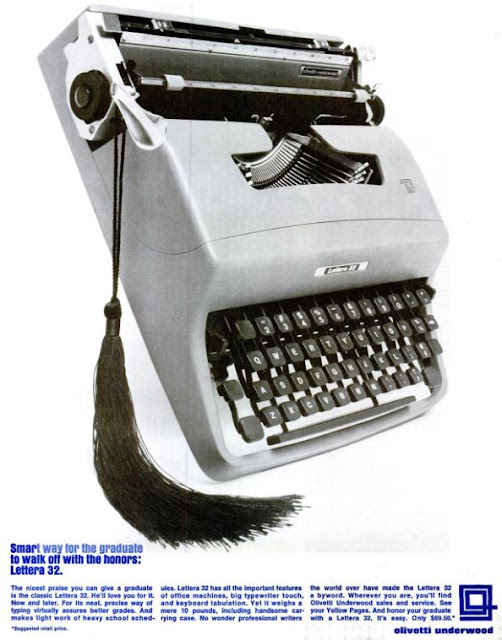 In my case there was only one typewriter shop in town, Jim McNulty’s on Albert Street (although Hay’s Department Store later sold Olympia SM9s). In 1965, I probably went out of my way to walk down Albert Street at least three or four times a week, after school, just to make sure the Lettera 32 was still in the window. Someone else had to get it before me – it was just too gorgeous for words. I have no idea whether Jim had other portables for sale, the 32 was the only one in his window. When I did finally did get my hands on it, and took it proudly into the Grey Star’s newsroom, I quickly noted it was the only Olivetti on the seven desks. The editor had his 1956 taupe Lettera 22 amid the ash on his office desk, but in the reporters room there were only Imperial Good Companions (albeit in an eye-catching deep red) and Brothers. I didn’t think for one second I was kidding myself, in regarding mine to be vastly superior in all regards. 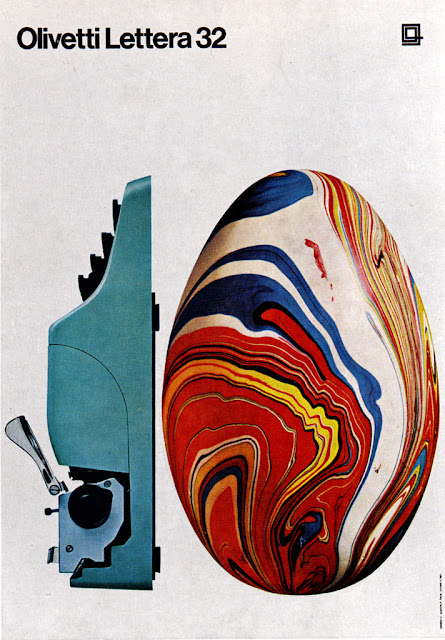 It’s a funny thing, looking back on it now, but when, after six years of yearning to start a journalism cadetship, the last thing I thought of taking into the newspaper office - when the chance eventually did come - was a typewriter. I must have thought the tools of the trade were supplied. Well, the pens and notebooks were, but not the typewriters. Of course, I did already own my own portable, an Underwood Universal, which was given to me by my Dad in 1957. But that machine got such a pounding on my home desk, I would never have taken it anywhere else. It deserved its occasional respite. 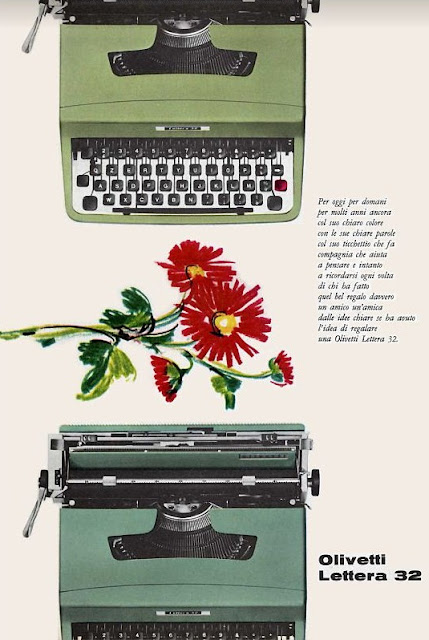 When I first started work at the newspaper, it was as an intern in the August school holidays. Jack Turner, the chief of staff, scoured the building for me, and found a clunky old Remington standard somewhere out the back, in the print shop. I was far from unaccustomed to using standards, and the Remington suited me just fine, although its racket probably disturbed the concentration of the older reporters around me. Soon after joining the staff full-time, in early December, I was given the nod to go down to McNulty’s and buy the Lettera 32. The company paid for it, and would dock my wages a few shillings each week to settle up. But the Olivetti was mine, all mine! And I loved the feeling that I was its proud owner. 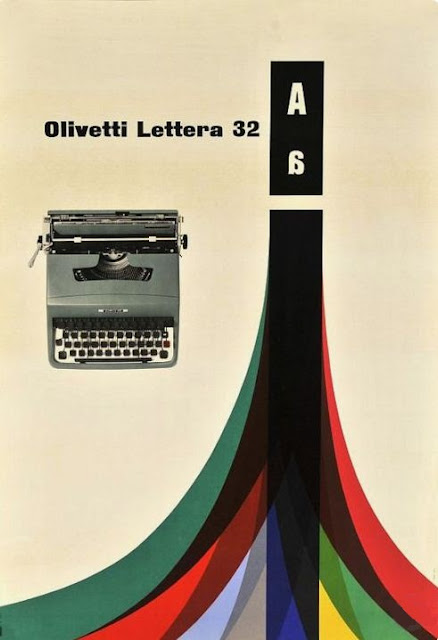 From that point on, as I travelled across the world, working in Auckland, Sydney, Cork, Dublin, London and then back in Australia, and was sent on assignment around the globe –to places as exotic as Fiji and Egypt – I always used a Lettera 32. I never considered a change for one moment. That enormous amount of usage naturally entrenched my loyalty to and passion for the 32. 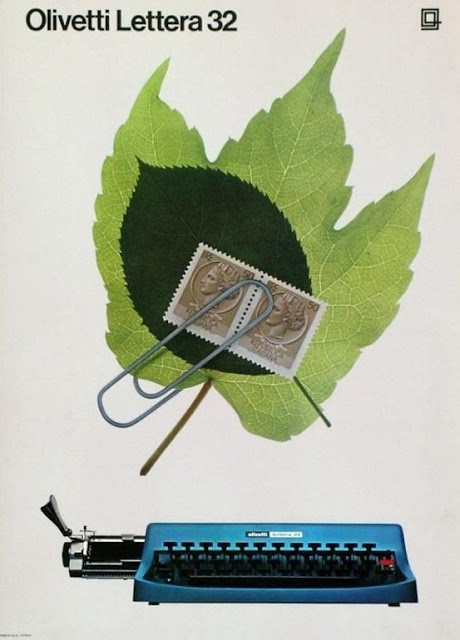 I have to confess portability – the weight of the Lettera 32 in its snazzy, tight-fitting carry case – was always an important factor, right up there with never wavering reliability. In 1974 I worked so late in the Press Room at London’s Twickenham rugby stadium that when I finally emerged, the lights were out and the 20-foot high gates were locked. I got out, with typewriter, by pushing the Olivetti through the palings and dropping it on to the ground outside, then scaling the gates. I’d never have managed it with anything bulkier. 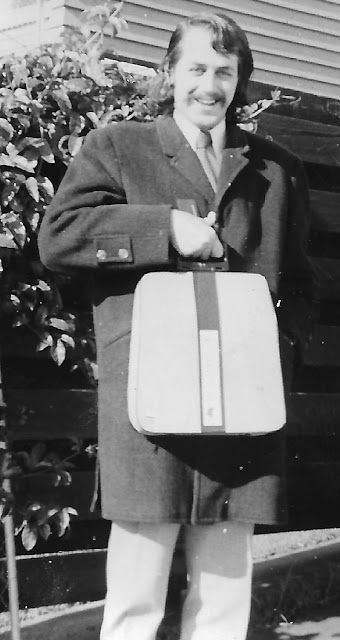 Me, Auckland, June 1971
So I came back to the matter of choice. Yes, the Lettera 32 greatly appealed to me in 1965. For one thing, my editor owned a taupe 22 and, after all, he’d got it at the Melbourne Olympic Games. More importantly, however, I liked the look of the Olivetti, the way I liked the look of Carter Brown potboiler covers, of a 57 T-bird or a Triumph Spitfire (got to own a couple of them, too), or a Jaguar Mark 2 (still dreaming). The Lettera 32 was sleek and modern and – well, very sexy. I liked the concave keytops in grey plastic, I liked the steely blue colour. I liked the state-of-the-art case. 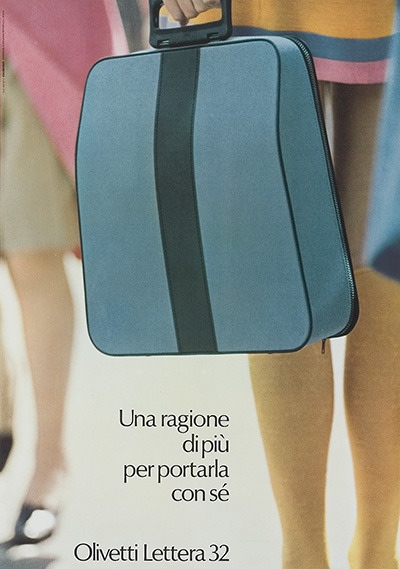 Were there any other criteria when it came to making my selection? Not one. I only had eyes for this one portable anyway. But how the Lettera 32 typed, how it suited my typing, what its features were - I didn’t give a single jot for such things. It was so beautiful, I would have to fit myself around its needs, not it around mine. It’s bit like the way one feels about a girlfriend: she could say, “Go jump” and you’d ask, “How high?” It was the same for me and the Olivetti. 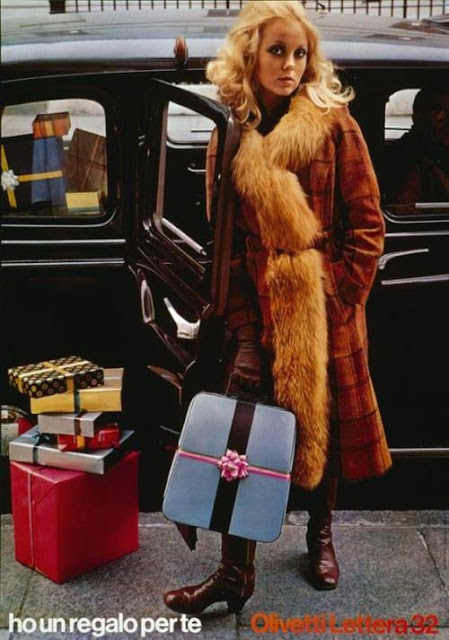 We’re told one never forgets a first love. I can’t say I’ve ever really fallen completely out of love with the Lettera 32, it’s just that many other loves have come into my life in the past 54 years, and some I’ve loved even more than the 32. But I’ve never been able to abandon the 32 either. Oddly enough, when I was asked about a machine for The Typewriter orchestral performance in November, my mind drifted toward the 32 – now, I suppose, I tend to think of it as my “old reliable”. 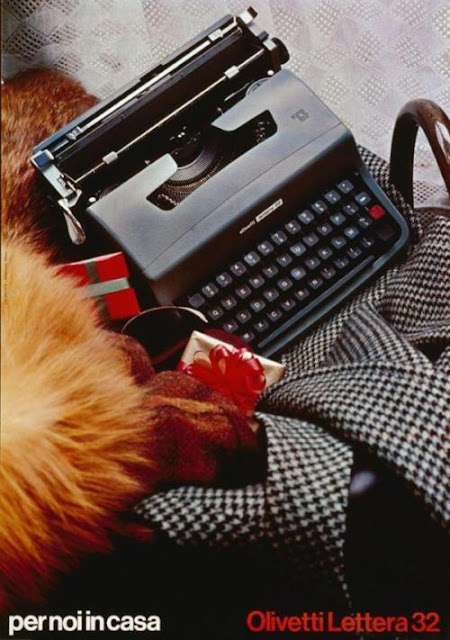 Most Typospherians have, in the past decade or so, given themselves the chance to use a whole wide range of typewriters. Many have collections, and can make a daily choice from a selection of dozens. That’s what the typewriter obsession is really all about – trying out new machines, experiencing as many as financially and physically possible, being the Lotharios of typewriting. I’ve never once received a “new” old typewriter without wanting to type with it immediately. For me it’s a natural instinct. An insatiable curiosity, if you like, an ever-present need. 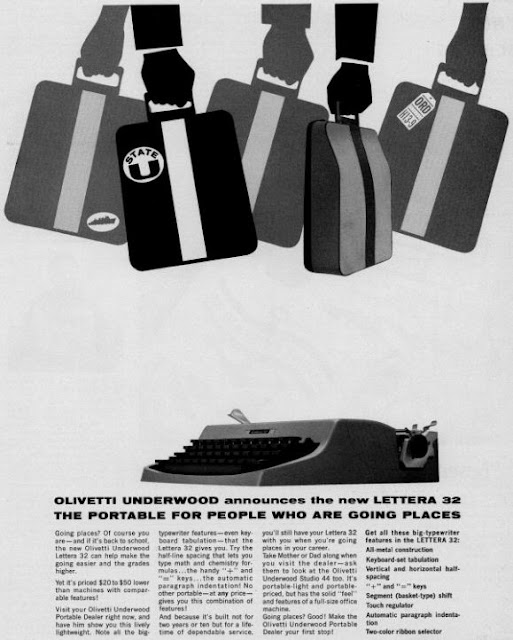 With these multiple experiences, preferences will naturally evolve. But while Richard talks about “the first typewriter I would grab to use”, I don’t think many us ponder that choice for very long. I’ve been asked the question, “What would you take if the house was on fire?” many, many times, and the answer probably changes every time. Hopefully, we’ll never have to make that decision. So it’s not worth sweating over. For me, it comes down to this: the Lettera 32 was my first love, the love wore off, but the affection remains. Other portables have, from time to time, filled the gap left in my heart. The Lettera 32 isn’t the one I’d grab in case of fire – they’re easily replaceable. Yet, for all that, I can’t forget the way I felt about it in 1965, and how it succeeded, back then, in mindlessly reducing my choice to one. It was the only choice I remember having. Most of the blokes who worked around me on the Grey Star in 1965 can’t recall what they used. I can and always will. 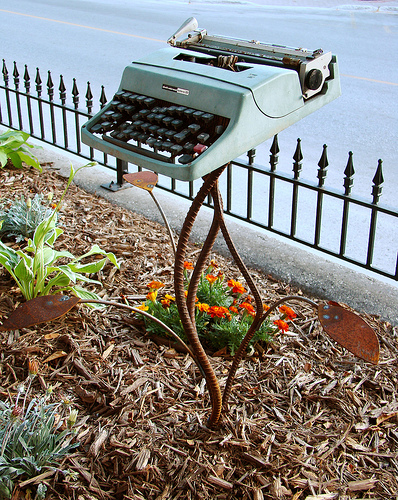 *Yes, Ted and John, “The Magnificent Seven” will be reprinted, hopefully sometime later this year.

Posted by Robert Messenger at 22:06

Even though I do n ot use it often, and it is not a typewriter to use for travel or hours on end; If the house caught fire I'd have to grab the Hammond Multiplex. For a full featured nice to use typewriter thought probably a ??? I do not know. Too many choices, but good fodder for a future post on my blog.

The Magnificent Seven! The superior second edition? I can't wait!

I've only typed on a very few Olivettis. By great good fortune, I have a taupe, round-keyed Lettera 22 that's virtually identical to the first typewriter I ever typed on: my mother's Lettera 22, which she must have purchased or received about that time that she graduated from college in 1951. I love the way they look, the way they smell (!), and the bold, interesting type that they produce. But both have a peculiarly spongy feel to the keys—the feeling that, even though the typebar has struck the platen, the key still has a way to go, and that instead of a firm stopping point, there's only a feeling of increasing resistance. I know that these machines are tough, but I can't escape the feeling that if I were to test that resistance and type with too much careless strength, I'd bend the key and render it unusable. It's disconcerting. Does this match the feel of the Letteras that you've used? The only other Olivetti that I've typed on was a Studio 44, which was entirely different.

Perhaps it's not incidental that I'm a ten-finger typist, while you and Will Self are two-finger typists. Or perhaps it is. I only know that I find I really need a feeling of finality when I press a key to be comfortable. It's the only factor that keeps my love affair with the Lettera 22 from being nearly as strong as yours with the 32, and it's a significant one.

Clearly, your 32 was the right machine for your needs for a long time. I can certainly understand a lifelong fondness.

My own "machine to save in a fire" would, of course, be the first one I ever owned, my Remington Noiseless Portable no. 7. I have many more valuable typewriters in terms of money, but none more valuable in terms of sentiment.

Thanks Bill, John and Richard.
John, good point about 10-finger typing. But it got me thinking on an entirely different tact - nothing to do with your very valid comments - about whether there's a difference people who merely type with typewriters and those who USE typewriters, in the sense they know how to use them to get the most out of them, regardless of model. The 10-finger typists I've seen in action among bloggers, like Richard P and Jasper Lindell, type beautifully but also know how to use typewriters, because they understand the beasts with all their quirks. Jasper and I once had a side-splitting experience with another blogger, who pontificates about different models yet very clearly didn't know to actually USE a typewriter. With print newspaper journalists, it was never a case of simply typing stories, but USING the machine to its utmost capacity. Of course, that most notably included speed. Does this make any sense?