The Redemption of Margaret Mead 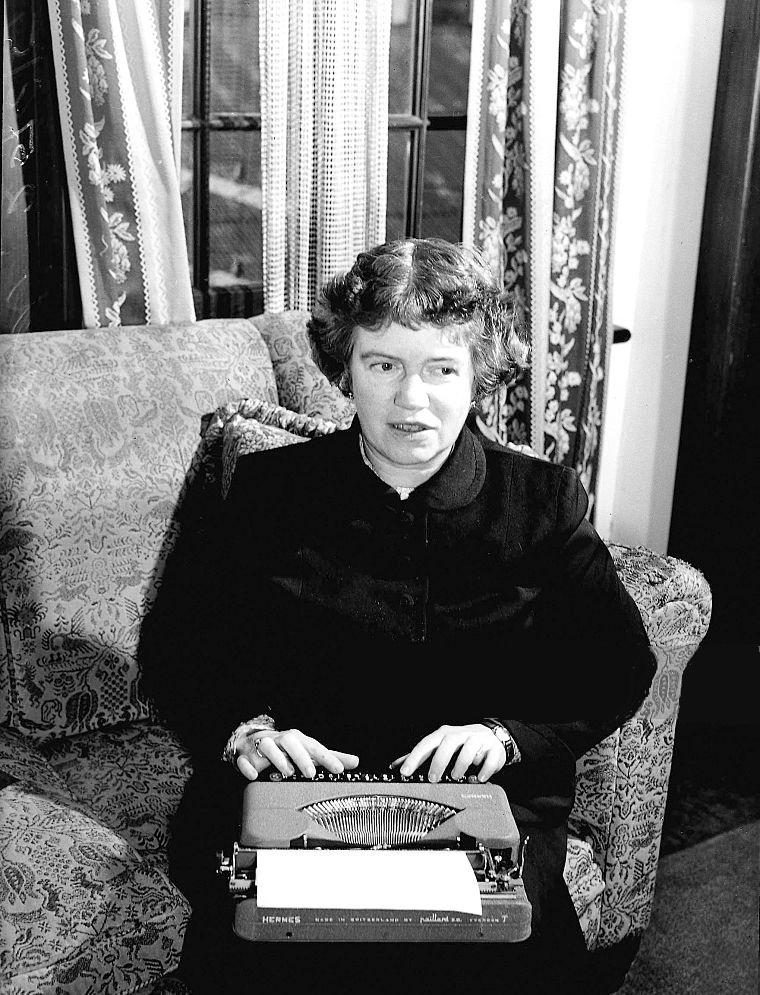 This photo, showing Margaret Mead at her Hermes Baby portable typewriter, was taken by the Sydney afternoon daily The Sun, on August 25, 1951. It appeared (with the typewriter cropped out, amazingly) with an interview with Mead in the edition of August 27. Mead arrived in Australia with her daughter Mary Catherine Bateson on August 17, for a 10-week lecture tour for the New Education Fellowship Jubilee Education Conference, held in all state capitals. At the time Mead was curator of ethnology at the American Museum of Natural History.
It was good to read Louis Menaud’s New Yorker review of Charles King’s book Gods of the Upper Air, published last August. Good because the review, headed “How Cultural Anthropologists Redefined Humanity”, restored my faith in Margaret Mead. As luck would have it, I managed to track down the book in my local library, though it has been published here under a different title: The Reinvention of Humanity: A Story of Race, Sex, Gender and the Discovery of Culture. 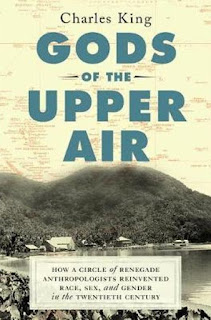 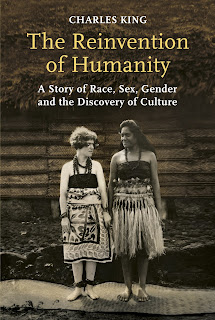 Menaud wrote, “Today, Margaret Mead lives on as an ‘icon’ - meaning that people might recognise the name, and are not surprised to see her face on a postage stamp (as it once was)[face value 32¢, May 1998], but they couldn’t tell you what she wrote or said. If pressed, they would probably guess that Mead was an important figure for the women’s movement. They would be confusing Mead’s significance as a role model (huge as that undoubtedly was) with Mead’s views. Mead was not a modern feminist, and Betty Friedan devoted a full chapter of the Feminine Mystique to an attack on her work. Mead mattered for other reasons. One of the aims of Charles King’s Gods of the Upper Air is to remind us what those were. Mead was a cultural anthropologist, and the rise of cultural anthropology is the subject of King’s book. It’s a group biography of Franz Boas, who established cultural anthropology as an academic discipline in the United States, and four of Boas’s many protégés: Ruth Benedict, Zora Neale Hurston (below), Ella Cara Deloria and Mead. King argues that these people were ‘on the front lines of the greatest moral battle of our time: the struggle to prove that - despite differences of skin colour, gender, ability, or custom - humanity is one undivided thing.’” 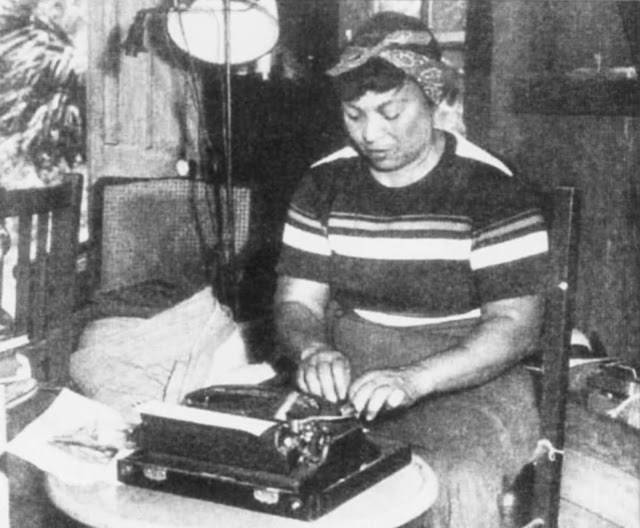 Menaud says issues around race, gender, sexuality, and “otherness” are still very much with us, “although in slightly altered form. And when people discuss them they no longer solicit the wisdom of anthropologists. What happened? Soon after Mead’s death, cultural anthropology began losing its voice in public debates. King thinks that the reason for this was the rise of anti-relativism.” 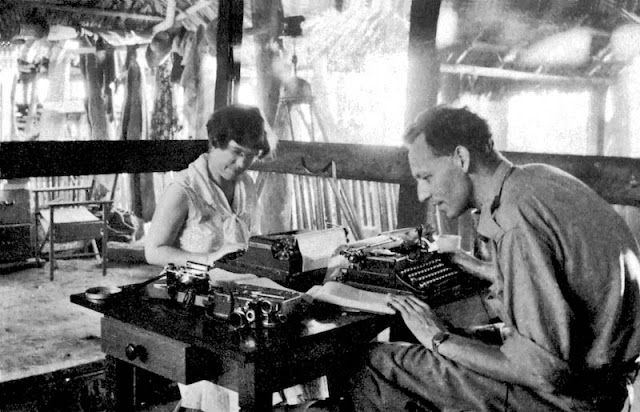 A large number of people have tried unsuccessfully to identify when and where this photo of Mead and her third husband, British anthropologist Gregory Bateson, typing up field notes on their Royal portables, was taken (some dating it to 1961, and placing it in Bali). It was actually shot at their 'home' near the Sepik River, New Guinea, in 1938.
But the greatest impact on Mead’s reputation came from “the direct attack made by the anthropologist Derek Freeman, a [Canberra-based] New Zealander, on [Mead’s] Coming of Age in Samoa. In two books published after Mead’s death, Margaret Mead and Samoa: The Making and Unmaking of an Anthropological Myth (1983) and The Fateful Hoaxing of Margaret Mead (1998), Freeman claimed that Mead had been tricked by her native informants. Freeman’s books kicked off a wave of reconsideration. 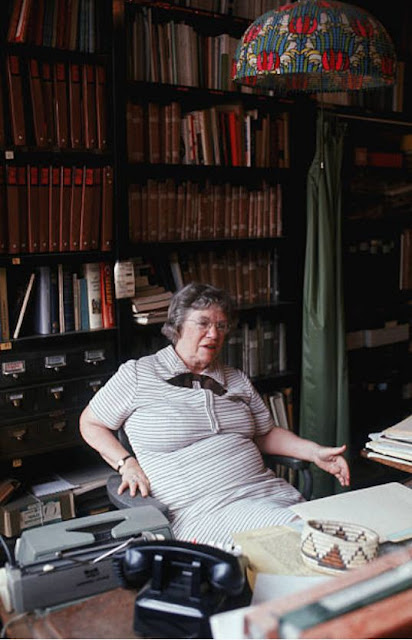 Mead on August 5, 1970
“King consigns the entire controversy to an endnote, as he does later challenges to the reliability of Boas’s findings in his 1911 study of the bodily forms of the children of immigrants. He does this because subsequent investigations suggest that the accusers were wrong [my emphasis] and that Mead and Boas were both substantially correct [ditto].” But Menaud argues that “what was under assault was the whole culturalist account of human behavior, and what the disputes symptomised was a swing back toward biology.” 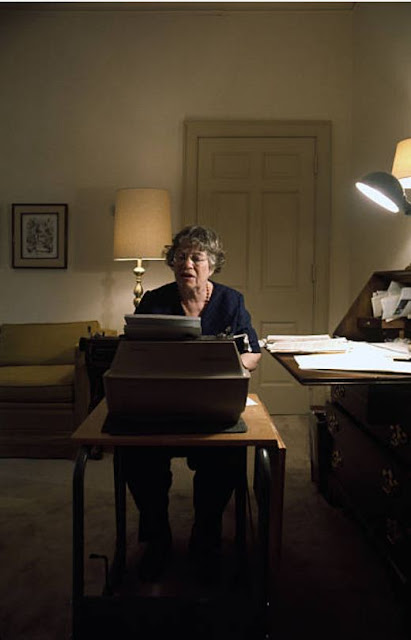 Mead on October 10, 1973
Margaret Mead was born in Philadelphia on December 16, 1901. In the mid-1960s she joined forces with communications theorist Rudolf Modley to establish an organisation called Glyphs Inc, whose goal was to create a universal graphic symbol language to be understood by any members of any culture. She died of pancreatic cancer, in New York on November 15, 1978, aged 76. 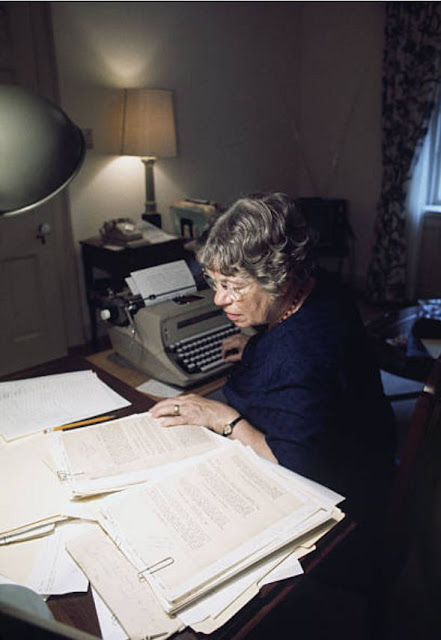 Mead on October 10, 1973
In 1983, almost five years after Mead had died, Freeman published Margaret Mead and Samoa, in which he challenged Mead's major findings about sexuality in Samoan society. Freeman's book was controversial in its turn: later in 1983 the American Anthropological Association declared it to be “poorly written, unscientific, irresponsible and misleading”. In 1999, Freeman published another book, The Fateful Hoaxing of Margaret Mead, including previously unavailable material. 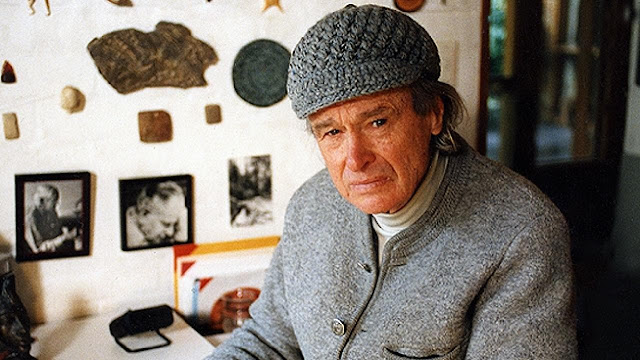 John Derek Freeman (above, 1916-2001), born in Brooklyn, Wellington, New Zealand, to an Australian father and New Zealand mother, died in Canberra on July 6, 2001, aged 84. In Freeman's obituary in The New York Times, John Shaw stated that Freeman’s thesis, though upsetting many, had by the time of his death generally gained widespread acceptance. “His challenge was initially greeted with disbelief or anger, but gradually won wide - although not complete – acceptance”, “many anthropologists have agreed to disagree over the findings of one of the science's founding mothers, acknowledging both Mead's pioneering research and the fact that she may have been mistaken on details.” Soon after, The New York Times published a response from Professor Louise Lamphere, president of the American Anthropological Association; “Your obituary of the anthropologist Derek Freeman leaves the impression that the two books he wrote attacking Margaret Mead’s work have permanently damaged her reputation. The Freeman debate has been the subject of a number of books and scholarly articles that support her views on the importance of culture for the adolescent experience, while criticising some details of her research. I have taught about the controversy for the last 18 years and am still impressed by the fact that a 24-year-old woman could produce a study so far ahead of its time. Dr Freeman studied a different island 20 years after Mead's research, and his notion that biology is more determinative than culture is oversimplified. Most serious scholarship casts grave doubt on his data and theory.” 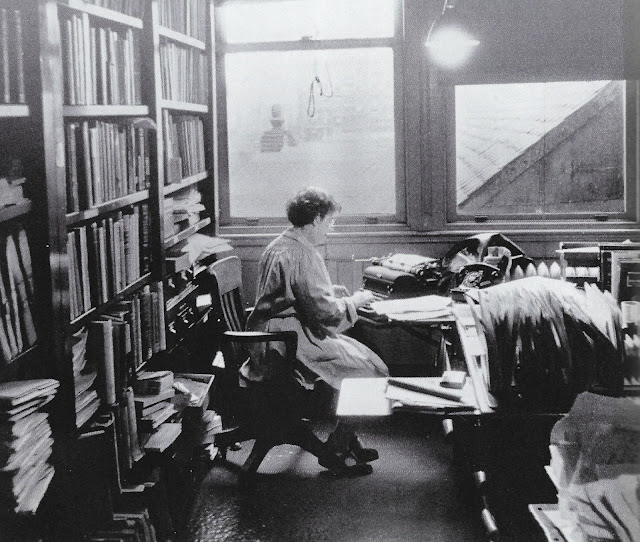 Mead in her office at the American Museum of Natural History.
In a 2009 evaluation of the debate, anthropologist Paul Shankman concluded that: “There is now a large body of criticism of Freeman's work from a number of perspectives in which Mead, Samoa, and anthropology appear in a very different light than they do in Freeman's work. Indeed, the immense significance that Freeman gave his critique looks like ‘much ado about nothing’ to many of his critics.” Shankman supports the contention that Mead's research was essentially correct, and concludes that Freeman cherry-picked his data and misrepresented both Mead and Samoan culture. In her 2015 book Galileo's Middle Finger, Alice Dreger argued that Freeman's accusations were unfounded and misleading.

Mead in 1930
In 2018 Martha Macintyre, honorary principal fellow in the School of Social and Political Sciences at the University of Melbourne, wrote of her personal experiences of working with Freeman in Canberra in a review of Peter Hempenstall’s Truth's Fool: Derek Freeman and the War Over Cultural Anthropology. Macintyre said, “Hempenstall has written an apologia for his difficult subject. It is to his credit that he discusses the behaviour that earned Freeman his reputation for ‘madness’, but his attempts to disprove the facts of his mental state dominate the biography in ways that undermine his claims for Freeman’s scholarly legacy. Freeman never produced a work that set out his Big Idea about the relationship between biology and sociocultural anthropology. His behaviour in academic roles as a postgraduate supervisor and departmental head was often disruptive and counterproductive. Hempenstall appears to consider the lack of acknowledgement in the official Australian National University history a slight. I suspect it was because Derek Freeman had become too much of an embarrassment.”
Posted by Robert Messenger at 21:17

I need to add those books to my reading list.

Oh man ... lots of photos to add to my "Writers and their Typewriters"!

Thanks, as ever, for your reporting.