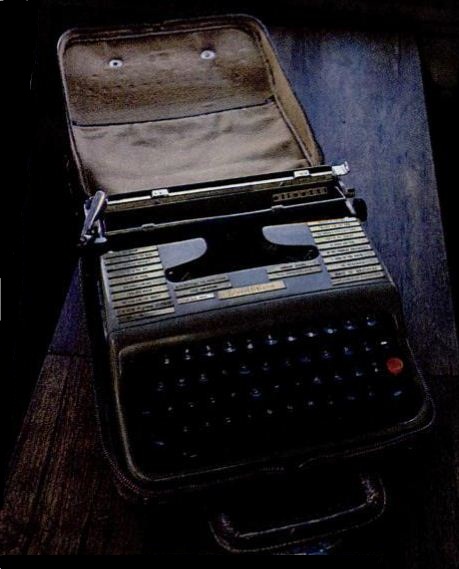 When author Russell Munson visited Ernie Gann’s 800-acre Red Mill Farm on San Juan Island, Washington, in late 1992, almost a year to the day after Gann had died at Friday Harbor, he photographed Gann’s festooned Olivetti Lettera 22 still on Gann’s writing desk in the old chicken coop that Gann had converted into a studio. Gann had written there for 26 years, from 1965. Munson wrote in the December 1992 issue of Flying magazine, “The old Olivetti portable typewriter that kicked around all over the world with Gann rests in its scarred leather case on a small table. On top of the machine are fastened 25 bronze strips like campaign ribbons, with the titles of most of his books, including Island in the Sun (1944), Blaze of Noon (1946), The High and The Mighty (1953), his autobiography A Hostage to Fortune (1978), Gentlemen of Adventure (1983) and, of course, the remarkable all-time classic, Fate is the Hunter (1961) … Twenty of the books [actually 21] were best-sellers.” Island in the Sky, The High and The Mighty and Fate Is the Hunter were made into major motion pictures.
(After Gann’s death, on December 19, 1991, the Experimental Aircraft Association moved the Red Mill Farm studio and its furnishings to its aviation museum in Oshkosh, Wisconsin.) 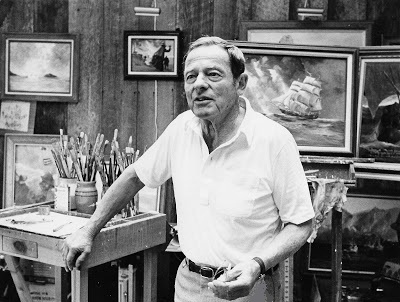 Ernest Kellogg Gann was born in Lincoln, Nebraska on October 13, 1910. He was an aviator, author, sailor and conservationist. He graduated from Culver Military Academy  then matriculated with the Yale School of Drama. In the late 1930s Gann purchased a half partnership in a Stinson Reliant (gullwing) aircraft with actor Burgess Meredith and soon became an accomplished aviator. After moving to California, he also began to write short stories. Then back in New York he was hired by American Airlines to fly Douglas DC-2s and Douglas DC-3s. The Second World War took him to Europe, Africa, South America and India. His travels and adventures would become the inspiration for many of his novels and screenplays and he gave up flying to begin writing as a full-time occupation. 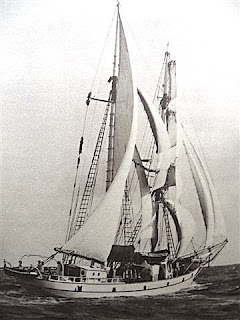 Albatross after her conversion to a square rig.
Gann had a lifelong love of sailing and owned several boats of various types and sizes during his lifetime. Gann purchased a large metal sailboat in Rotterdam, which he christened Albatross. Along with his family and a few friends he sailed the boat across the Atlantic Ocean, through the Panama Canal to San Francisco Bay. Albatross was overhauled and Gann then sailed it around the South Pacific Ocean. 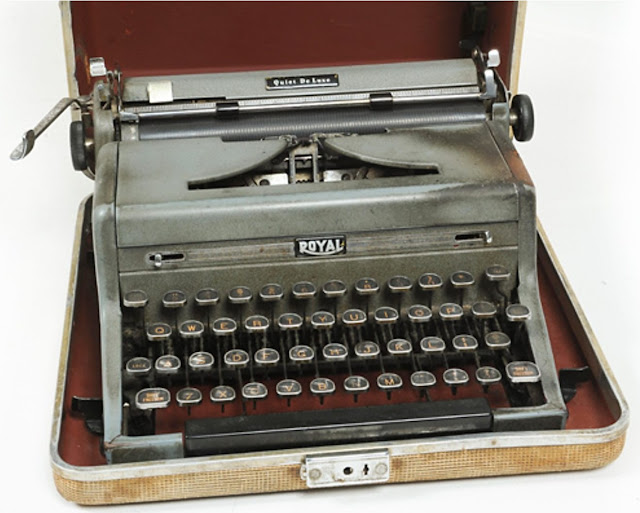 This is the Royal Quite DeLuxe portable which belonged to Alistair Cooke (1908-2004), a British-born American writer whose work as a journalist, television personality and radio broadcaster was done primarily in the United States. Cooke turned out his “Letter from America” for the BBC for almost 58 years. Cooke’s daughter Susan said that since Boston University got all his papers, it was only right that his typewriter should go the BBC in England. “This was the one he travelled with and the one I remember him working on in his apartment,” she said. “He wasn't writing for America - it was for England and the BBC.” 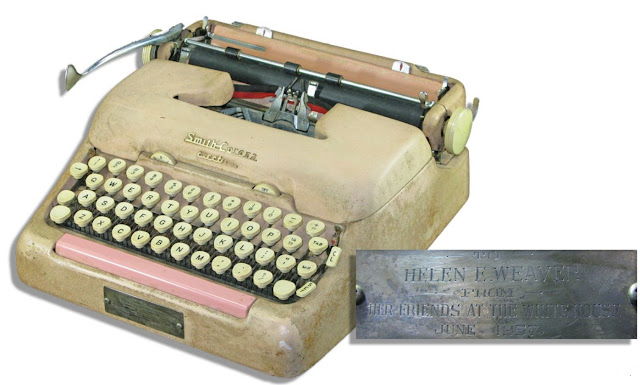 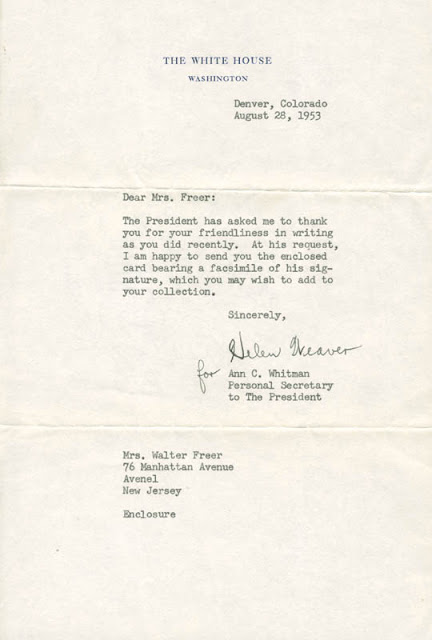 This Smith-Corona 5TE electric portable has a plaque on it saying it was given to Helen E. Weaver, President Dwight D. Eisenhower's personal secretary at NATO headquarters in Paris from 1951, and his secretary at the White House from 1953-1957, by her White House friends. The 5TE was first produced in 1957. 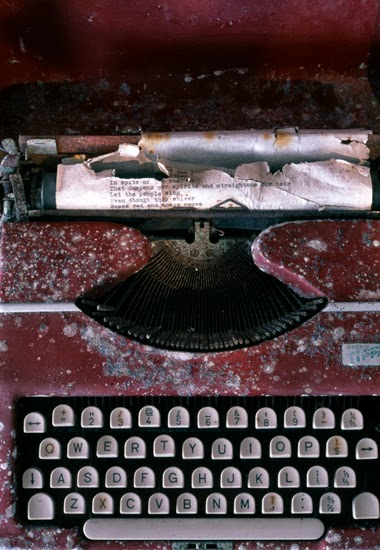 One of the more unusual typewriter displays you are likely to find anywhere in the world is in the late Noël Coward's West Indian home, Firefly, six miles east of Oracabessa in Jamaica. It is his Gossen Tippa Pilot portable typewriter - allegedly containing the very last words Coward ever wrote! 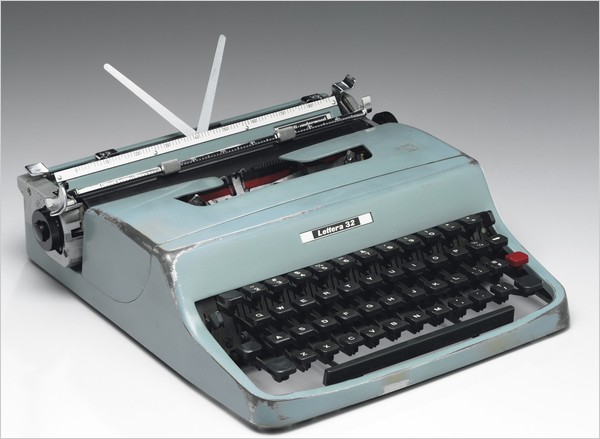 Not forgetting Cormac McCarthy's Olivetti Lettera 32 with its questionable provenance and its high selling price. 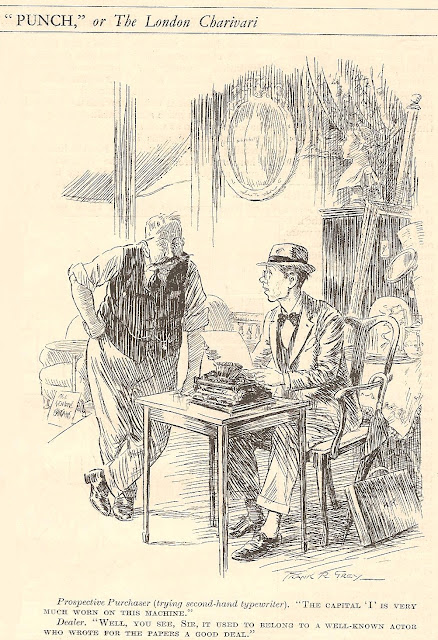 Posted by Robert Messenger at 20:35

Thank you for some nice to know typewriter history.

I love these worn out ones, sometimes a machine which seems to have been places is more appealing than a crisp new one.

Another wonderful piece of history. I always wonder about the stories of my old machines.