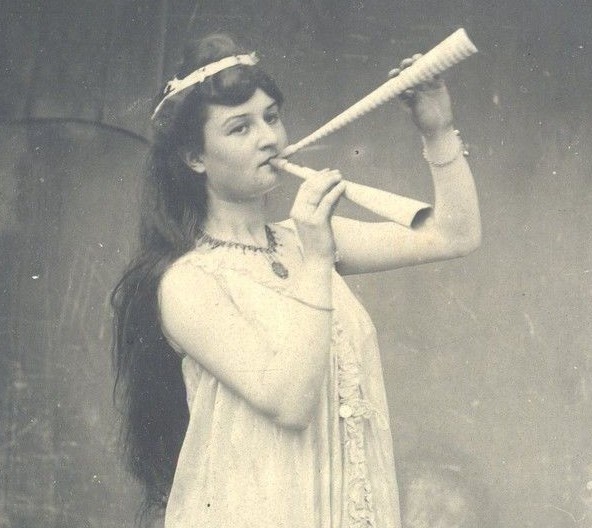 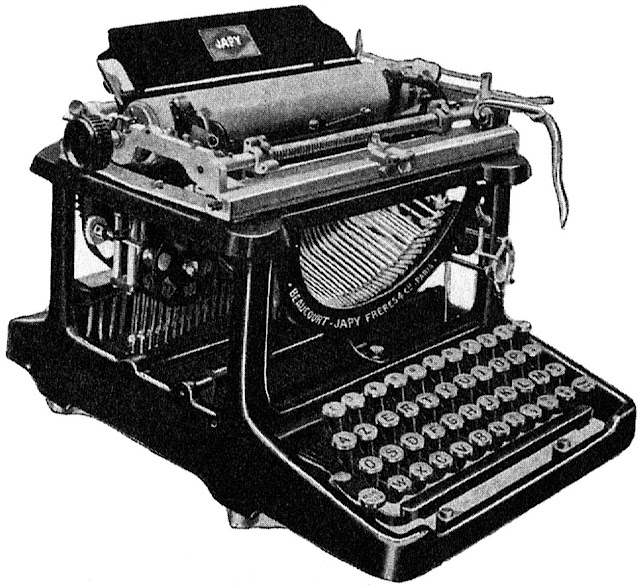 The Fay-Sho as a Japy.

The odd mécascriptophile (French for typewriter collector) among us is amused by the occasional bit of spice mixed into their machine à écrire obssession. That, indeed, might explain a couple of efforts to couple typewriters with erotica (as a prime example, Paul Robert’s Sexy Legs). And, after all, typewriter collecting is a mild form of masochism; as least they’re tied together in my experience. Quiet what we can make of Marguerite Japy, an heiress in the Japy Frères typewriter enterprise, knocking off Felix Faure, the president of France, in the Palais de l’Élysée on the afternoon of February 16, 1899, is another matter. There wasn’t, as far as I can tell, a typewriter anywhere to be seen in Faure’s discreet ground floor “Blue Room”, though Marguerite would later claim she was there to help Faure write his autobiography. But there was, apparently, nothing “auto” going on, except that Faure was dosed to the eyeballs with the powerful aphrodisiac cantharide officinale (Spanish fly). When palace officials, responding to shouts from the room, entered, they found Faure rapidly expiring from a heart attack, his trousers down around his ankles, and Marguerite beside him adjusting her clothing and trying to get Faure’s rigid fingers out of her hair, so tightly entwined that they eventually had to be cut loose. A French newspaper declared “Félix Faure has sacrificed too much to Venus”. English writer James Womack, in a poem published in Literary Review last May, said Faure died “of a stiff apoplexy, while receiving oral gratification from his mistress …” 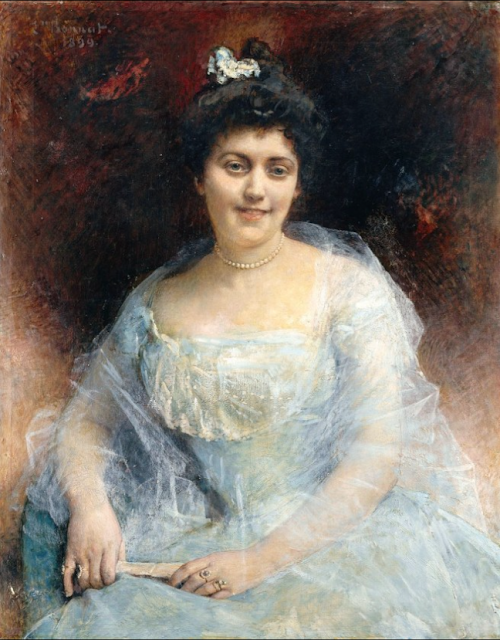 Marguerite Jeanne “Meg” Japy was, by then, Marguerite Steinheil, having married the academic painter Édouard Charles Adolphe Steinheil, 19 years her senior, in 1890.  Two decades later, in attempts to escape her Parisienne reputation as a salonnière and demi-mondaine, Marguerite moved to England, called herself Madame de Serignac, and in marrying Robert Brooke Campbell Scarlett, the 6th Baron Abinger, in 1917, became Baroness - or Lady - Abinger. How rich is that? Literally the Scarlett Lady!  Marguerite was born the daughter of rentier Édouard Louis Frédéric Japy (1832-1888) on April 16, 1869, in the home of the Japy typewriter, Beaucourt, of the Territoire de Belfort, east of the Principality of Montbéliard. That’s where, in 1771, Frédéric Louis Japy (1749-1812), the family patriarch, returned from serving an apprenticeship in watchmaking in Switzerland. Five years later Frédéric founded a factory to produce his own timepieces. By 1806 he had 500 workers and handed over the operation to his sons, Fritz-Guillaume (1774-1854, Marguerite’s great-grandfather), Louis Frédéric (1777-1852) and Jean Pierre (1785-1863). The Japy Frères diversified their empire, eventually reaching a range that included clocks, locks, wrought iron utensils, screws and tools, bicycle parts, motors, lighting, garden and other furniture, pumps, coffee mills and a motorised camera. In 1850 the family owned five factories and by the 1880s employed 5000 workers in nine factories. Japy  Frères was the second largest company in France, in terms of capital, during the Second Empire (1852-1870). In 1909, the year Marguerite left Paris and settled in England, Japy Frères had secured the rights to manufacture the Remington-Sholes (aka Rem-Sho, Fay-Sho) typewriter in Beaucourt. 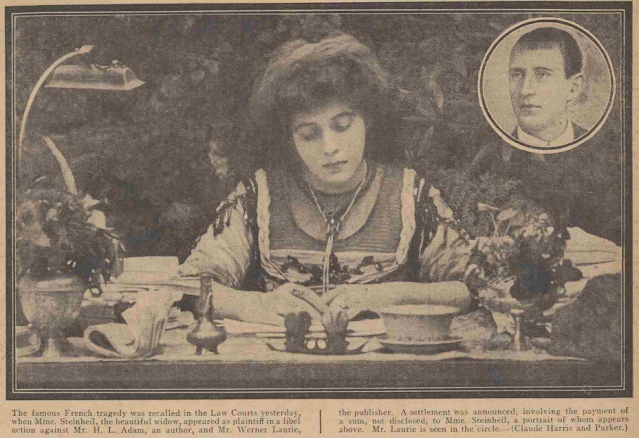 As her family’s various businesses disintegrated in the 1930s, Marguerite, having survived the Faure scandal - by enjoying “flattering notoriety” in French political circles - escaped charges of murdering her mother and husband in 1908*, and an affair with King Sisowath of Cambodia, lived a quiet and peaceful life in Hove in Sussex. She died in a nursing home there on July 18, 1954, aged 85. (*The soundest theory seems to be that the deaths resulted from a visit to Marguerite by one of her multitude of lovers, a relative of the Tsar of Russia, and his guilt in the matter was hushed up by the French Government – that is, Marguerite’s trial was a mere show case). 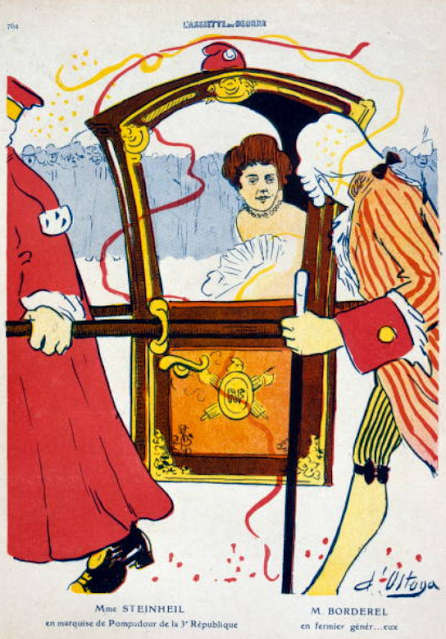 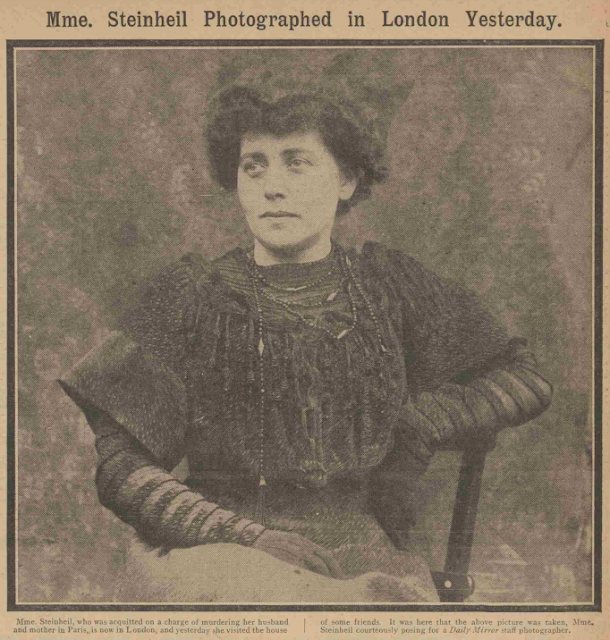 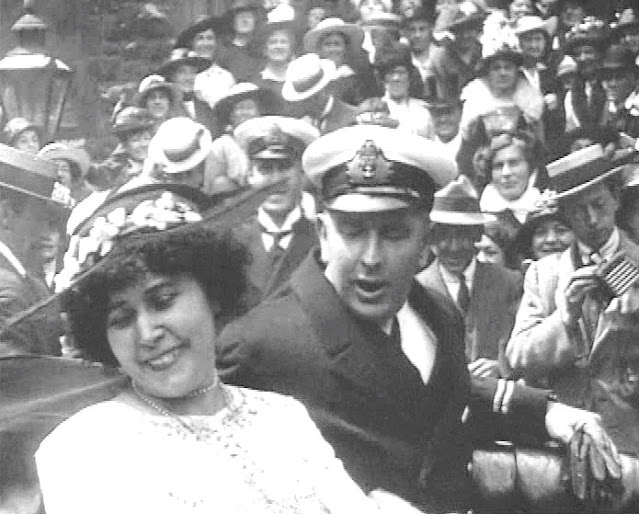 Marguerite Steinheil at her second wedding.
Posted by Robert Messenger at 20:18

Great blog, spiced up my coffee. In addition to french politicians, whom always lead "interesting Lives" I have always been fascinated with Japy typewriters but know nothing about their history. I still don't have one in my collection. I was also interested to learn the real name of Spanish fly.

Robert, you never fail to amuse, inform, and feed our addictions.