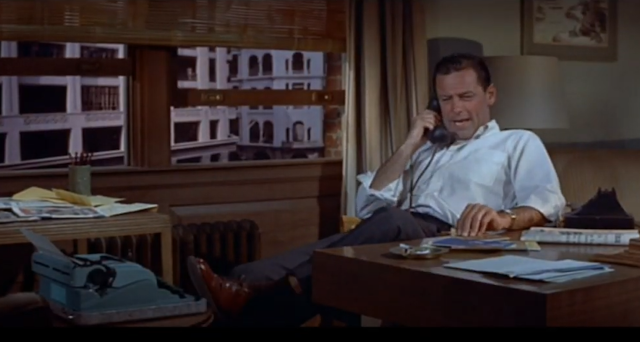 For some strange reason, Love is a Many-Splendored Thing popped into my head, and it has taken weeks to shake it out again. It was the song that bugged me, not the movie or the soap opera (neither of which I can recall seeing). Maybe it came to mind because some bright spark asked in a newspaper quiz question, “Who sang Unchained Melody?”, apparently not knowing there are at least 27 different answers to this poser, all of which would be perfectly correct. Unchained Melody had been topping charts around the world for 35 years before Ghost was made in 1990. But what’s that got to do with Love is a Many-Splendored Thing? Only that the enduring Unchained Melody was edged by Love is a Many-Splendored Thing for the 1955 Academy Award for Best Original Song. Part of that Oscar should probably have gone to the estate of Giacomo Puccini, since Love is a Many-Splendored Thing's refrain is based on the aria Un bel dì vedremo from  Puccini’s opera, Madama Butterfly. The version of the movie theme song that got stuck in my head was by the Four Aces, who also had other memorable million-sellers with Three Coins in a Fountain and Stranger in Paradise. Those old 78rp shellacs I recall very clearly.  Yet what I have on my mind most of the time these days are typewriters. So it has to be typewriter-related, no? Could it not be that Richard Polt posted on his blog and on Instagram with his beautiful “Tuxedo Typer” (which, incidentally, was at stake the only time Richard and I ever bid against one another on eBay. He offered to back off, but I pulled out of the auction.) This machine is, as Richard said, a “black-and-white version of the Underwood De Luxe Quiet Tab [which] is the rarest variation”. I have owned the more common variations, but I have also owned an Underwood Finger-Flite Champion, one of the best 10 typewriters I've ever used. 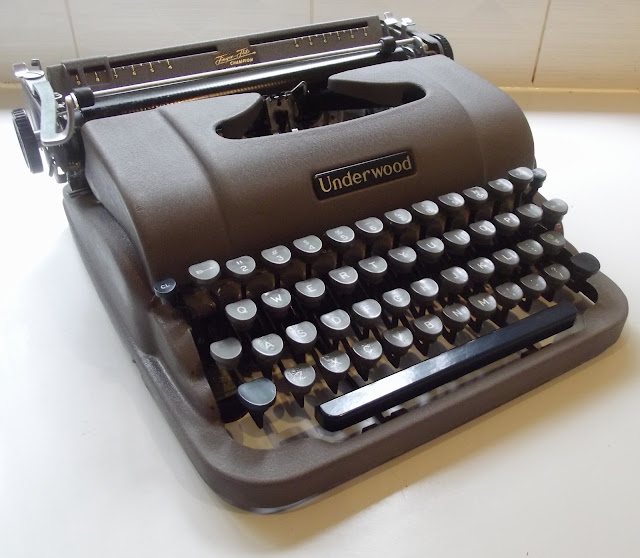 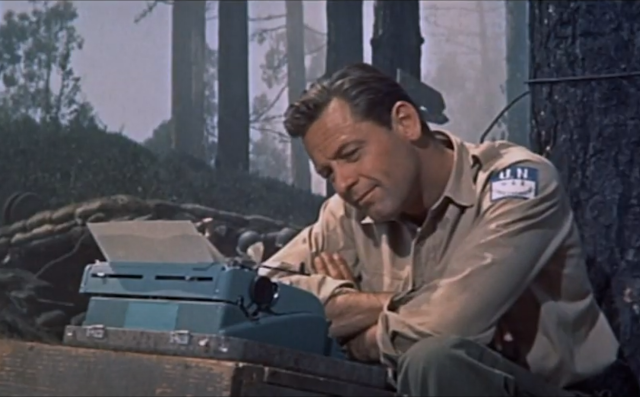 Why, pray tell, would an Underwood De Luxe Quiet Tab or a Finger-Flite Champion spark thoughts of Love is a Many-Splendored Thing? Well, it turns out that in the movie, William Holden plays American foreign correspondent Mark Elliott, who uses … well, it looked at first glance to be the more common colour variation of an Underwood De Luxe Quiet Tab. Except, on closer inspection, I don’t think it is the DLQT, but an earlier Paul Braginetz design, the Finger-Flite (which reached the market in September 1950; the movie begins in Hong Kong in 1949). Both models, I believe, have slots at the back (and that’s the angle we’re mostly seeing the Holden-Elliott typewriter) to adjust the margins, and there’s a covering panel exactly where the Underwood Corporation decal would be; the colour combo fits the Finger-Flite too. The two-toned typewriter is seen in Holden-Elliott’s office and being used - Holden stops typing to admire a butterfly that lands on it - at the Korean War front. (Spoiler alert: The character dies in a bombing raid seconds later). I can’t recall ever seeing either an Underwood DLQT or a Finger-Flite in another movie or TV show. And given that both lean more toward a semi-portable than an out-and-out travelling machine, I tend to think foreign correspondents might have steered clear of these particular models. On the other hand, actors playing foreign correspondents could be another matter. Here’s Holden getting off a plane at Ciampino International Airport “G. B. Pastine” in Rome in April 1957. Is that a typewriter case in his left hand? One of those Underwood cases that came with a stand? 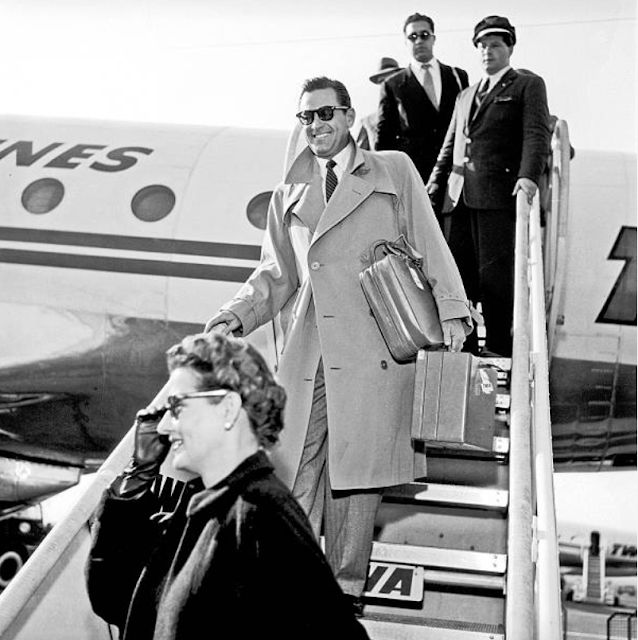 But here we get to the nub of all this. The Mark Elliott character played by Holden is based on an Australian war correspondent called Ian Morrison. I was actually looking into the life of Morrison a few weeks ago when I stumbled across the extraordinary story of US war correspondent Yates McDaniel. Naturally, I got completely side-tracked, posted on this blog about McDaniel and put Morrison on the back-burner. But it was Morrison, not the theme song or the Underwood typewriter, that sowed the seed of Love is a Many-Splendored Thing in my head. Indeed, Morrison died in the Korean War in 1950. And while based in Singapore in 1949, he had had an affair in Hong Kong with Chinese doctor and widow Han Suyin, who in 1952 wrote the best-seller novel (A Many-Splendoured Thing) that led to the 1955 movie (Han is played by Jennifer Jones) with a slightly different title and the million-selling song. 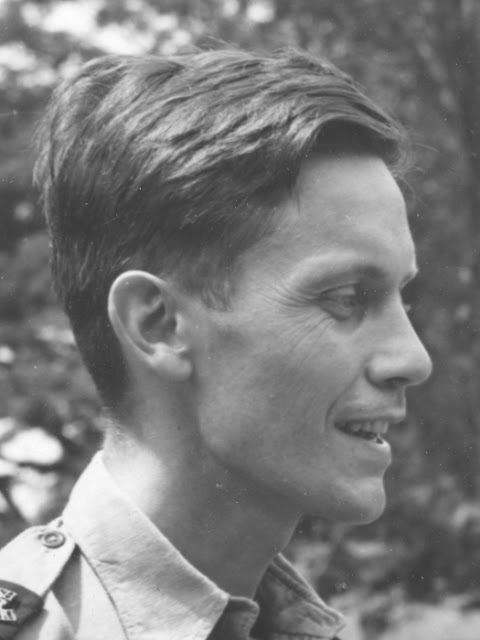 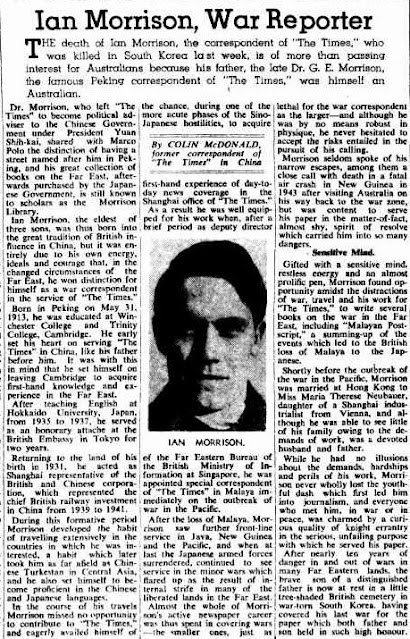 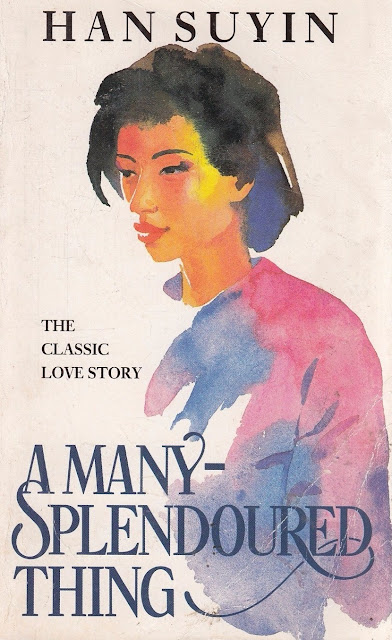 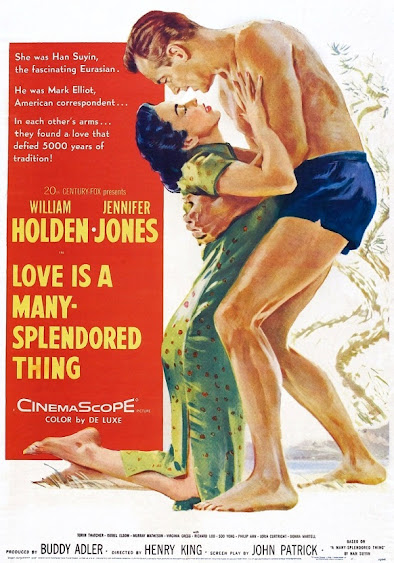 Han Suyin was born Rosalie Matilda Kuanghu Chou in Xinyang, Henan, China, on  September 12, 1917, the daughter of a Belgian-educated Chinese engineer and his Flemish wife. Han started work as a typist at the Peking Union Medical College in 1931 and in 1935 went to Brussels to study medicine. She was widowed in 1947 when her Chinese army officer husband was killed in action during the Chinese Civil War. In 1949 Han went to Hong Kong to practise at the Queen Mary Hospital. She died in Lausanne on November 2, 2012, aged 95. 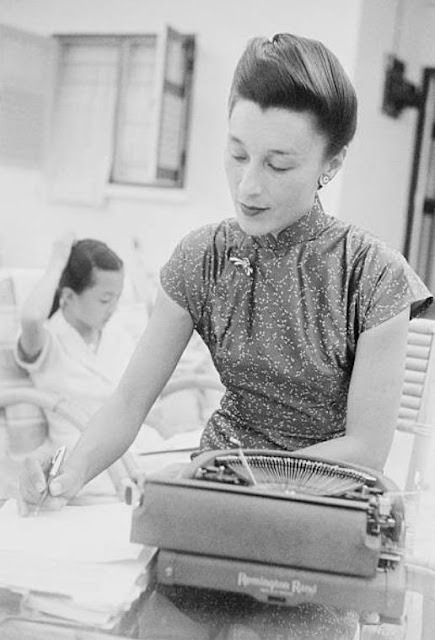 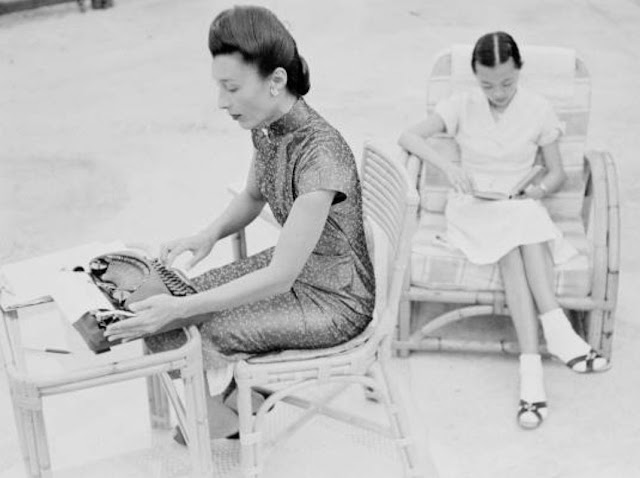 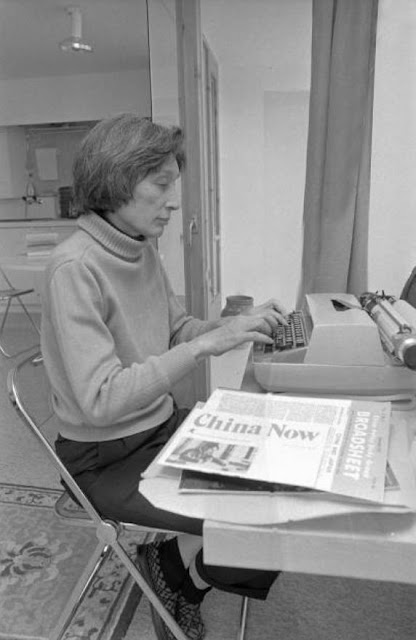 Ian Ernest McLeavy Morrison was born in what is now Beijing on May 31, 1913, the eldest son of Australian adventurer and journalist George Ernest Morrison (1862-1920) and Jennie Wark Robin (1889-1923). His father, The Times' first Peking correspondent, had been living in China on and off since 1897. From 1935-38, Ian Morrison was an English lecturer at Hokkaido Imperial University in Sapporo, Japan. During World War II, Morrison covered the Pacific Front and was promoted from freelance contributor to full-time staff correspondent of his father’s old newspaper, The Times. After the war he was stationed in Singapore as a correspondent for The Times. While visiting Hong Kong, he met Han. Morrison died on August 12, 1950, when a jeep carrying him struck a landmine during the Battle of Taegu (now called Daegu) in the north Gyeongsang province of South Korea.

As for the Underwood Finger-Flite Champion, it was the first of Braginetz’s line of new designs for Underwood portables. The last of Willie Dobson’s styling, which dated back to March 1936, was the Underwood Champion “with finger-flite control” which was still being advertised in July 1952.

I am always amazed how you come up with all the interesting posts.
I remember some of those songs on 78s, but more modern releases of them on 45s when I worked in radio. I have yet to ad one of those model Underwood typewriters to my collection.

What a fascinating post. I was cycling through my typewriters and just typed on two of my Underwoods and must say they are great typers. Thanks for the tie in, now I have to read A Many Splendored Thing.