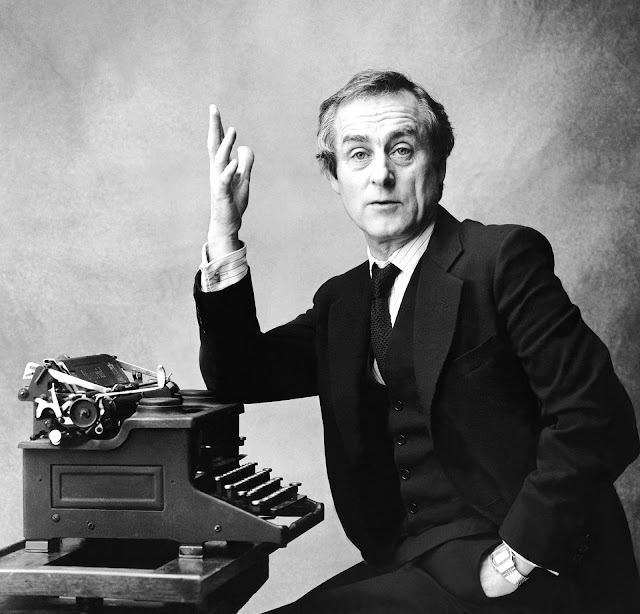 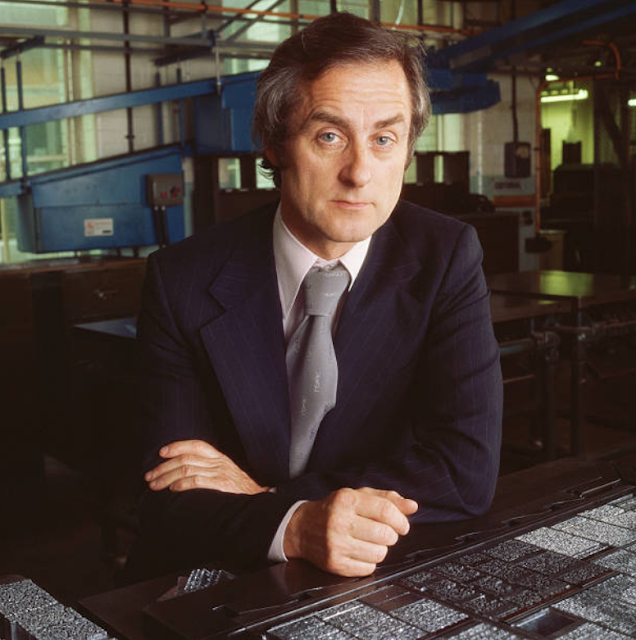 Getting his hands dirty: Evans on "the stone".
They were born eight months apart and on opposite sides of the Atlantic; one in Brooklyn, New York, the other in Salford, Greater Manchester, each cherished spots in many forms of modern culture. They both died aged 92, three weeks apart, one in New York City, the other in New Jersey. It seems unlikely they ever met, yet Harold Evans and Ed Benguiat, each in their own way, changed the way the world looked at, understood and appreciated type fonts. In Evans’ case, as arguably the finest journalist of the 20th Century, his insightful and courageous leadership of the London Sunday Times, and his keen eye for newspaper page layout, set benchmarks for print newspapers worldwide in the last quarter of the century. His five-volume 1972 manual of English, typography and layout, Editing and Design, quickly became the bible for journalists tasked with presenting the daily and weekly news in an accurate, eye-friendly and catching way. Benguiat was a gifted typographer and lettering artist who crafted more than 600 typeface designs, including Tiffany, Bookman, Panache, Souvenir, Edwardian Script, and the eponymous Benguiat and Benguiat Gothic. He designed or redesigned the logotypes for Esquire, The New York Times, Playboy, McCall’s, Reader’s Digest, Look and Sports Illustrated. 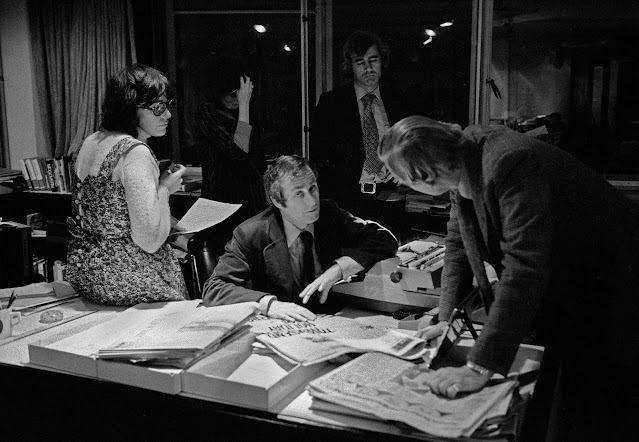 Evans marshals the troops at The Times. 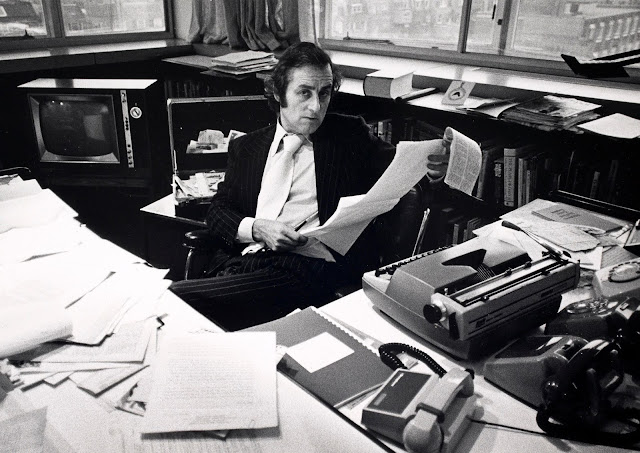 Sir Harold Matthew Evans was born in Patricroft, Eccles, a part of that “dirty old town” Salford, on June 28, 1928. From such grim beginnings, he went on to brighten the pages of newspapers across the world. He also led a campaign for more informed journalism. Even in his last years, as print newspapers folded across the globe in the face of the challenge of the Internet, Evans continued to argue strenuously that financial investment in good journalism would be the saviour of newspapers, that consumers would still prefer quality and accurate journalism over the half-baked nonsense that appears online. Evans was editor of The Sunday Times from 1967 to 1981, including the period when I worked for that newspaper as an Irish rugby correspondent. The evil Rupert Murdoch, a man who should be charged with crimes against humanity, acquired the Times group in 1981 and Evans was appointed editor of the daily Times but soon fell out with the Dirty Digger. Evans had set up the Sunday Times’ brilliant Insight investigative team, most notable for its exposure, through Australian journalist Philip Knightley, of the dangers of thalidomide, which caused children to be born with severely deformed limbs. This campaign was the subject of a documentary, Attacking the Devil: Harold Evans and the Last Nazi War Crime. Evans was knighted in 2004 for his services to journalism and in 2011 he became editor-at-large of the Reuters news agency. 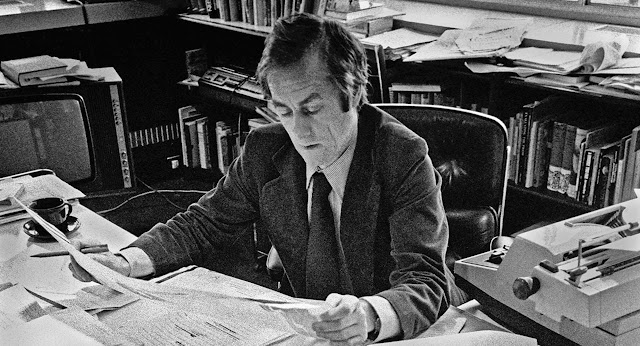 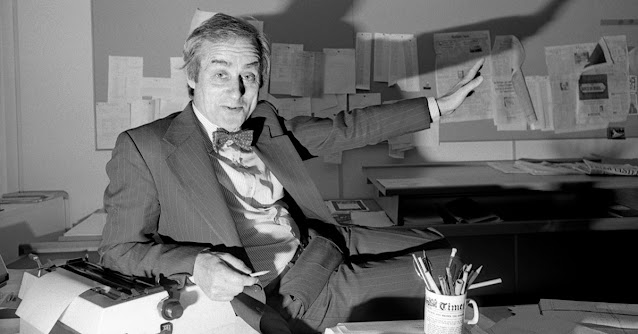 Evans started his career as 16-year-old reporter for a weekly newspaper in Ashton-under-Lyne, Lancashire. He became a sub-editor then assistant editor on the Manchester Evening News, moving on to be editor of a regional daily, The Northern Echo, in 1961, at just 33. He joined The Sunday Times in 1966. In 1984, Evans moved to the United States. He died of congestive heart failure in New York City on September, 23, aged of 92. 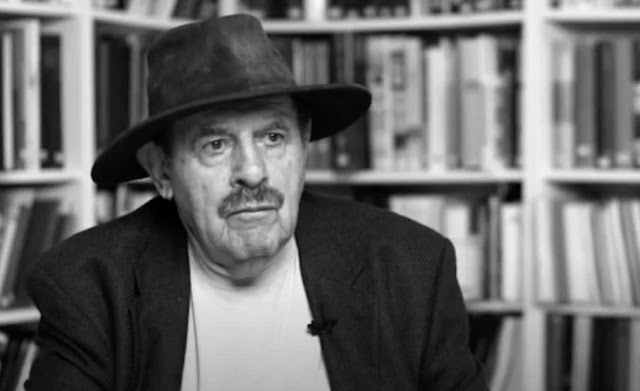 Ephram Edward Benguiat was born in Brooklyn on October 27, 1927. He started his design career by working, in his words, as a “cleavage retoucher” during the restrictive period after World War II, when the Hays Code imposed restrictions on nudity in motion pictures. Benguiat’s role involved airbrushing and other techniques to do away with nudity in published works. He went on to study graphical design, calligraphy and typography at the Workshop School of Advertising Art under the Russian-American graphical artist and calligrapher Paul Standard. He was hired as a designer by Esquire magazine in 1953 and subsequently went on to join Photo Lettering Inc as a design director in 1962. It was here that he worked on utilising photo technology for commercial typography and lettering. He helped set up the International Typeface Corporation in 1970. Benguiat died of cancer at his home in Cliffside Park, New Jersey, on October 15, 12 days before his 93rd birthday.

Posted by Robert Messenger at 14:07