On This Day in Typewriter History (XVII)

On this day in 1893, George Frederic Stillman was granted a patent for a typewriter ribbon guide for the Smith Premier Model 2, a machine which went into production the following year. The patent was assigned to one of the Smith brothers, Lyman Cornelius Smith. 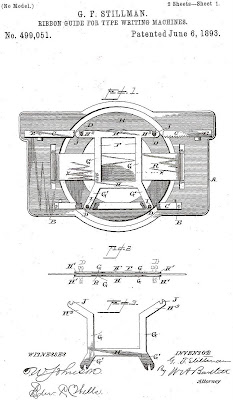 The patent itself is of little importance - it was just one more step in improving the Smith Premier typewriter, first produced in 1889. (Image of the Smith Premier No 2, below, from Alan Seaver's Machines of Loving Grace website) 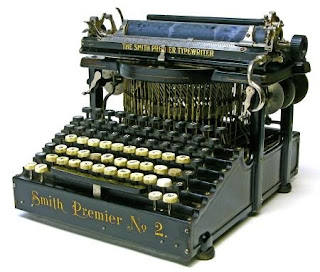 But George F. Stillman’s under-recognised place in the pantheon of typewriter inventors is crucially important. It seems Stillman has been unjustifiably made to languish all these years in the shadow of his more illustrious partner, Alexander Timothy Brown.

Stillman (left, above) and Brown (right, above) were virtually equals in one of the great typewriter design engineering partnerships of history – and their combined efforts were not always just for the enormous benefit of the Smith Premier Typewriter Company.

In the Smith-Corona 50th anniversary publication of 1953, the story is told that “Wilbert [Lewis] Smith, who ran the [small shot guns factory in Syracuse], engaged Alexander T. Brown who had been recommended as a person of considerable inventive talent. And it so happened that Alexander T. Brown not only improved the Smiths’ gun, he also interested the brothers in an entirely new venture. “In 1876, at the Centennial Exposition [the first official World’s Fair in the US, held in Philadelphia] Brown had seen a single case typewriter [the Sholes and Glidden] and was convinced that he could design a better one. So great were his convictions that Wilbur L. Smith became interested and personally financed the building of a working model of Brown’s machine … the Smiths liked Brown’s typewriter and decided to put it into production at the gun works.” 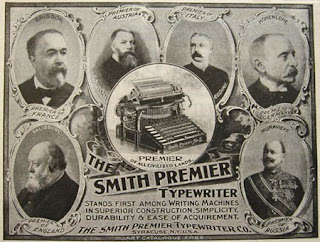 (Smith Premiers appear to have been endorsed by the premiers of six nations, at least judging by this advertisement, above. Would anyone get away with such an ad today?)
All typewriter histories give Brown similar credit, but few mention his partner Stillman. Yet they were a close working team, one’s abilities complementing the other’s. And this went beyond guns and typewriters. 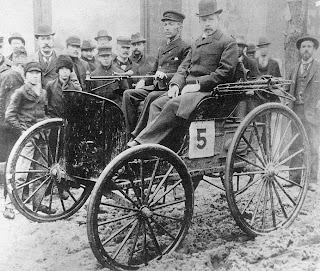 Today, interestingly enough, Brown and Stillman are best known for their invention of the pneumatic tire for vehicles, patented on December 20, 1892. Production of this tire started at the Hartford [Connecticut] Rubber Works in 1895 and in July that year Charles Duryea used the Brown-Stillman tires on his “Motorised Wagon” (above) to win the $5000 first prize in the 54-mile The Chicago Times-Herald event, the first automobile race held in the US. Duryea covered the distance in 7hr 53min at an average of 7mph. 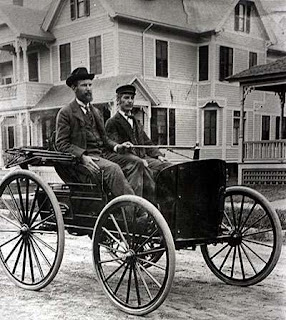 In the above photograph, Charles Duryea (left) is seen in his car with his brother, J.Frank Duryea. Some sources identify the two men in the car as Brown and Stillman.

Brown and Stillman set up their tire business while working for the Smith brothers. Stillman had joined Brown at Syracuse in 1888, one year after Brown had patented his typewriter. Stillman acted as assistant superintendant to Brown at the Smith factory and was its consulting engineer until 1903. 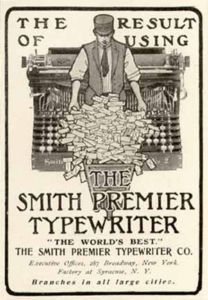 George Frederic Stillman was born in Leonardsville, New York, on April 11, 1858. He died in Syracuse on December 2, 1906, aged just 48. At the time of his death, he was a member of the Technology Club and the American Society of Mechanical Engineers. He and Brown were both high ranking masons. (Story below from page 4 of the Syracuse Journal of Monday, December 3, 1906; main headline: "Hot Bread in Doubt"))

Alexander Timothy Brown was born in Scott, New York, on November 21, 1854. Credited with more than 100 inventions, he was at various times president of the Smith Premier Typewriter Co, the Brown-Lipe Gear Co and the H.H. Franklin Manufacturing Co, and a stockholder in the Syracuse Aluminium and Bronze Co, the Globe Malleable Iron Works and the Pneumelectric Co, a director of the Third National Bank, the Journal Printing and Publishing Co and a trustee of Syracuse University; he was a life member of the American Society of Mechanical Engineers and of the National Geographic Society, and a member of the Transportation Club of New York City and the Automobile Club of Syracuse. 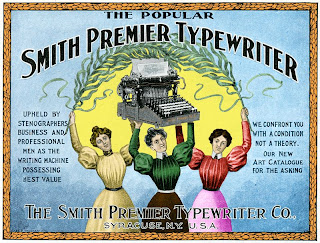 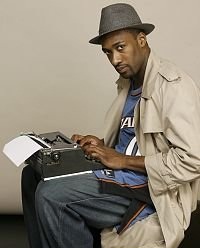 On this day in 2000, French writer Frédéric Charles Antoine Dard died in Bonnefontaine, Switzerland. Dard, born in Bourgoin-Jallieu on June 29, 1921, was author of the San-Antonio series. He was one of the most famous French crime novelists of the second half of the 20th century and also one of the most prolific, writing more than 300 novels. This photograph was taken of Frederic Dard at his Swiss estate at Bonnefontaine, Canton de Friborg, in May 1993. An electric typewriter in a cow paddock? I don't think so! 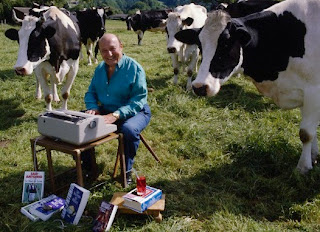 German dramatist and novelist Gerhart Hauptmann died on this day in 1946, in Agnetendorf, Poland, aged 83. He was born in Obersalzbrunn in Prussia on November 15, 1862. He received the Nobel Prize for Literature in 1912. He is seen here dictating to his secretary. 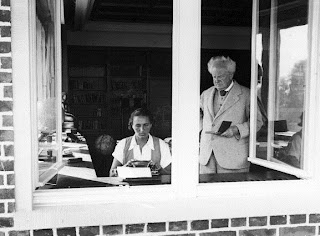 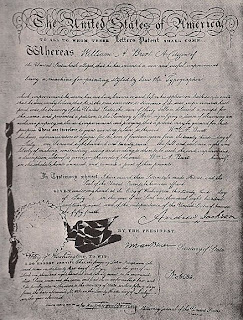 My sister turned 65 today. She does not share my love for typewriters. When she was 13, and studying shorthand-typing at high school, her teacher, Thelma Wilson, announced to the class that a tsunami had wiped out the seaside suburb in which we lived. My sister, Marilyn, rushed out of the class, jumped on her bicycle (possibly with Stillman-Brown tires?) and rode home, tears streaming from her eyes, only to find all was well. She never forgave Mrs Wilson for the unfounded claim and was turned off typewriters for life.
Posted by Robert Messenger at 14:32

We are happy that a tsunami didn't wipe you out when you were young - your continuing series is both enlightening and fun! (I just wonder when you're going to start getting mixed up with the roman numerals) :D