On This Day in Typewriter History (XXIV) 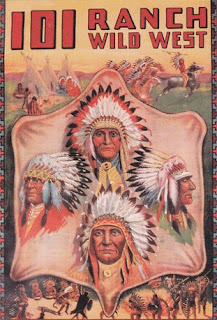 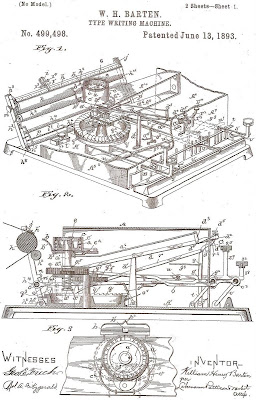 On this day in 1893, aged just 23, Barten was granted a patent for his typewriter, which used a typewheel resting on an inkpad and on which the PLATEN moved forward with the depression of the keys, to press the paper against the typewheel.
This is an unusual design which, to the best of my knowledge, has not been mentioned in any typewriter histories.
But, then, W.H.Barten was an unusual man.

Born in North Boston, Erie County, New York, on March 31, 1870, he was educated at the Hamburg Academy and the State Normal School in Fredonia, where he took a teaching course. After graduation, Barten studied law at Columbia University, but left the university in 1891 to enter the Indian Service as a teacher on the Pine Ridge Reservation in South Dakota (above).
The photograph of the school, above, was taken the year Barten went to Pine Ridge; there is a small Oglala tipi camp in the foreground.
Barten and his wife Angelique ran the school at the reservation until 1902, when the family moved to Gordon, Nebraska. Barten opened a mercantile store and outfitted reservation Native Americans for movies, rodeos and Wild West shows. 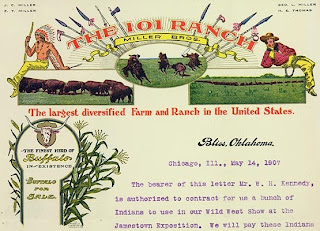 This is a letter authorising W.H. Kennedy to act as an agent for the Miller Brothers 101 Ranch Wild West Show in hiring Native Americans, for whom the Bartens acted as intermediaries.

Also here is an “Indian contract” signed by Kennedy for which Anglelique Barten acted as an interpreter in contracting a number of Native Americans to work for the Millers’ Wild West Show on a weekly wage of $5. 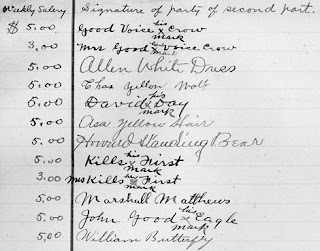 These documents are held by the Nebraska State Historical Society.
Other papers held relate to Barten's activities as a Wild West Show contractor for the Pine Ridge Native Americans. 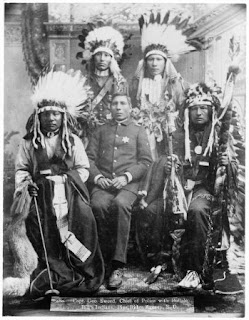 William Barten had become active in civic affairs, serving on the Gordon City Council in 1931-32 and as mayor of Gordon from 1934 to 1936. 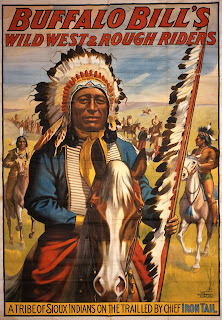 Barten had married Angelique (nee Cordier) at Pine Ridge on March 31, 1894. They had two children, Edison and Winona (although in some records, a Lucile Barten Davison is also mentioned as a daughter; some of many artefacts provided by her to the Nebraska State Historical Society are shown below).

Barten died at his home in Gordon on May 8, 1938.
But let’s get back to Barten’s typewriter. In his patent application specifications, Barten described it as having “printing characters arranged on a sector, wheel or cylinder in one or more rows or banks of type”. An inking-pad rested against the type and the platen was “propelled” against the typewheel. 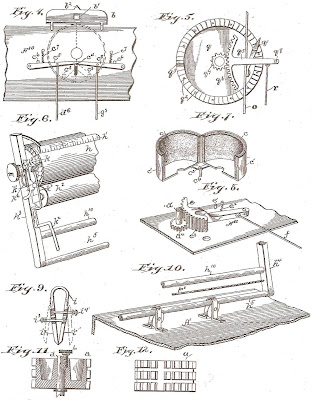 On this day in 1971, The New York Times began publishing the Pentagon Papers. Daniel Ellsberg had access to the papers at Rand and gave 43 volumes to New York Times reporter Neil Sheehan (seen below at his Underwood) in March 1971. The first article in the series was titled "Vietnam Archive: Pentagon Study Traces Three Decades of Growing US Involvement".

On this day in 1970, The Long and Winding Road became the The Beatles' last No 1 hit song. Here are the Fab Four with a (Adler Tippa?) typewriter: 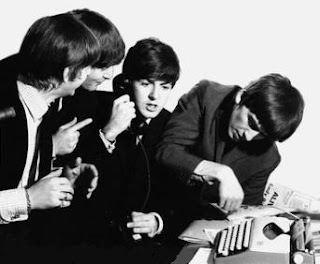 Posted by Robert Messenger at 12:11

I don't know where you get this stuff from but I'm glad you get it.

This idea of an index typewriter where the platen hits against the typewheel seems familiar. I think maybe the Peoples works like that.

Thank you Rob, Alan and Richard. I am freshly encouraged to plough on. Yes, Richard, you're right: I just checked Paul Lippman's book and the People's does work that way. It's a Brooks design, though, patented 1892. It does sound very similar, including the inking process.