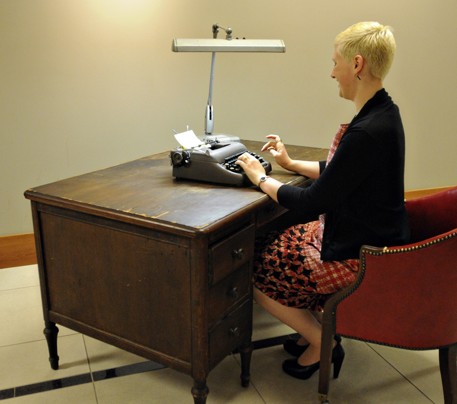 By Susanne M.Schafer
Associated Press
COLUMBIA, South Caroline, June 17, 2012:
Students more accustomed to computer screens than manual typewriters are getting a chance to sit at author Joseph Heller's stained wooden desk and type on the battered Smith-Corona he used to compose his acclaimed novel Catch-22.
A small exhibit at a University of South Carolina library displays the desk, typewriter and lamp used by Heller as he wrote many of his major works. The university library has one of the largest collections of his papers, manuscripts and other memorabilia available to researchers, library officials said.
"We acquired this with the expectation that students would type on the typewriter and experience sitting at his desk," said Elizabeth Suddeth, director of the Irvin Department of Rare Books and Special Collections at the Ernest F. Hollings Library on the Columbia campus, where the display is located.
The display is available for students and library visitors until late December, Suddeth said. 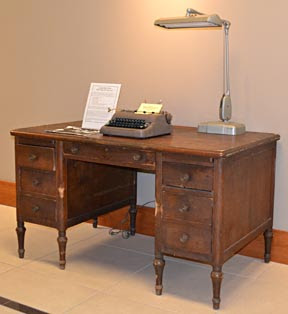 Heller died in 1999, and during the past year his widow, Valerie, added his desk and lamp to USC's collection, Suddeth said. Catch-22 was his first novel and is often hailed as one of America's best novels about World War II and questions of sanity, warfare and hypocrisy.
The typewriter was acquired in 2003 through the efforts of the late USC English professor Dr Matthew Bruccoli, who urged the university to buy a collection of Heller's manuscripts, and who also passed along many books from his own Heller collection, Suddeth said.
The well-worn desk is covered with coffee cup rings and other stains. Its veneer is chipped, there's a hole in the right drawer, and it bears scars at knee height where chairs apparently bashed against it. The small, portable typewriter has dark green keys that respond with a solid "thunk" when struck.
Heller wrote in his autobiography Then and Now about acquiring the typewriter, which he bought at Macy's in New York. He ordered a special "writer's keyboard", which had punctuation marks in lower and upper case to make typing easier, he said. "It made no difference," he wrote.
"It's very unfamiliar. You don't hold your hands the same way as you would with a computer," said Jessica Dowd, 25, who tried the machine out after noting she'd never used a manual typewriter.
"It's exciting to be able to touch what Heller touched," she said.
The display reflects how Bruccoli wanted his students to learn about literature, said Dr Park Bucker, an associate professor of English at USC's Sumter campus. 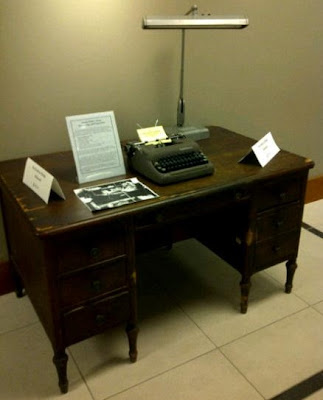 "He taught his classes in the library. He wanted students to be surrounded by writer's stuff. He was a very hands-on person and wanted a library to be a living collection," Bucker said.
Bucker said his own students "think a typewriter is a museum piece. They need to know that writing was a completely different process before the computer."
Bucker said some students enjoy Heller's dark humor in Catch-22, while others may find its "episodic nature" and changes of time frame frustrating.
The professor said Bruccoli invited Heller to visit the University of South Carolina several times, where he took part in writer's workshops and delivered the main address at a university's celebration of F. Scott Fitzgerald in 1996.
"Heller enjoyed his time here. That a big reason why we have his papers," Bucker said.
The exhibit is on display through to December 20th in the Irvin Department of Rare Books and Special Collections section. The library is open from 8.30am to 5pm on weekdays on the Columbia campus. 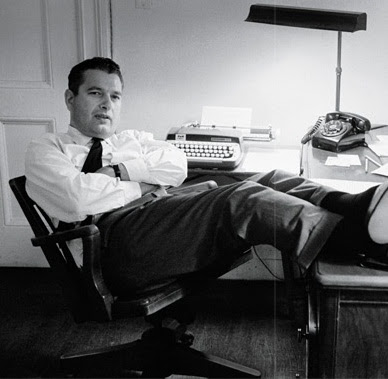 Heller with a later model SCM
Posted by Robert Messenger at 11:12

Saw this article last night. You've found more photos of them machine than I did.

It is interesting, and kinda cool that they can give their students an idea that great literature doesn't come from having a series of automated tools - but rather required attention to detail, and focus.

I sometimes wonder what coming to a typewriter for the first time as an adult feels like. To sit at one of those old SCM machines when all you have ever seen in your life are delicate and light plastic keyboards, it must feel odd.

It's great that people can actually use the machine at Heller's own desk.

What is this "writer's keyboard"? Most English-language typewriters, of course, type periods and commas whether the shift is depressed or not. But does Heller's typewriter have more features like this?

By definition, a typewriter is used by a "writer" in some sense of the word!

I half-suspect Heller, or someone else, was pulling someone's leg.

This is a very nice piece of living history. I'm glad that this tool doesn't live behind glass.

As for the writer's keyboard, I am reminded of my Olympia SM3s decked out with italic typefaces. Unlike their more common peers, these have shift free exclamation points. I'll have to pull one out and see if there are other keyboard punctuation differences.