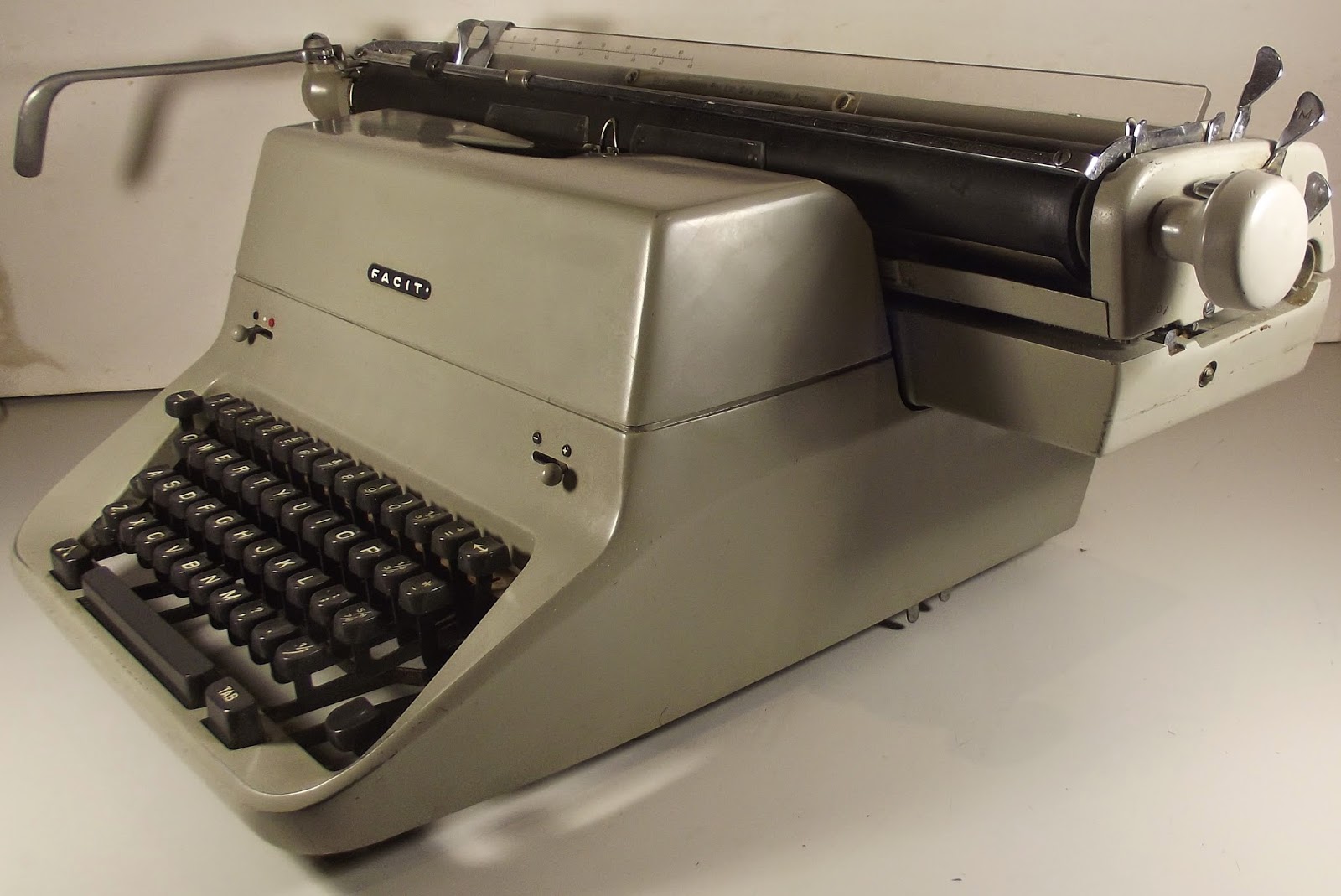 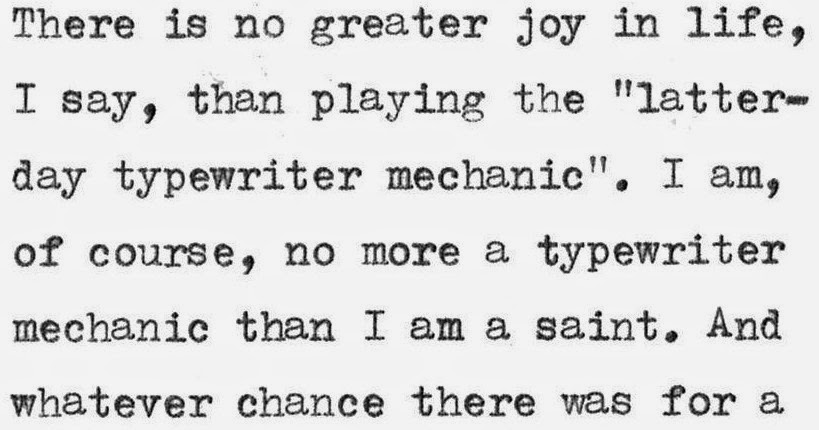 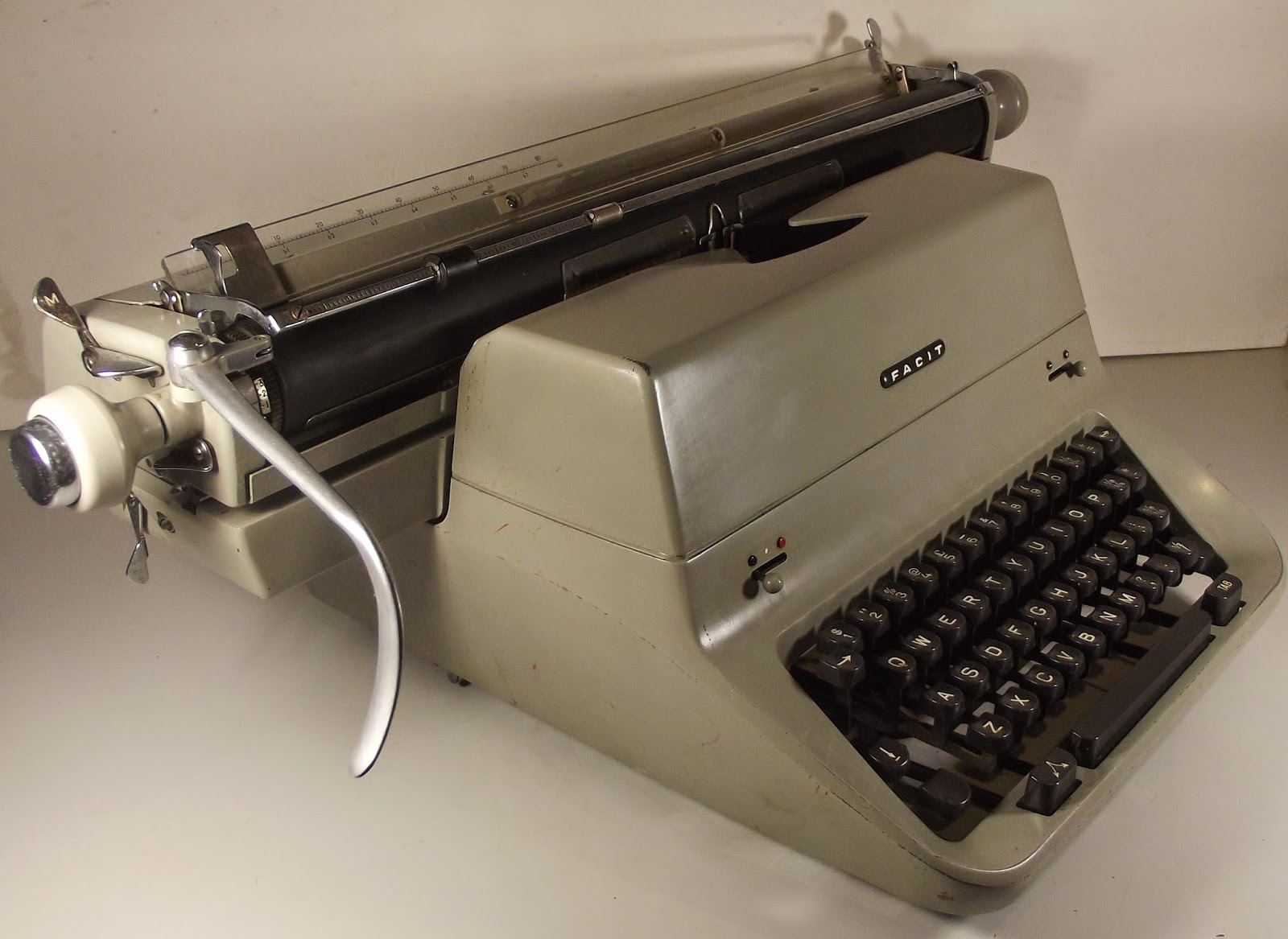 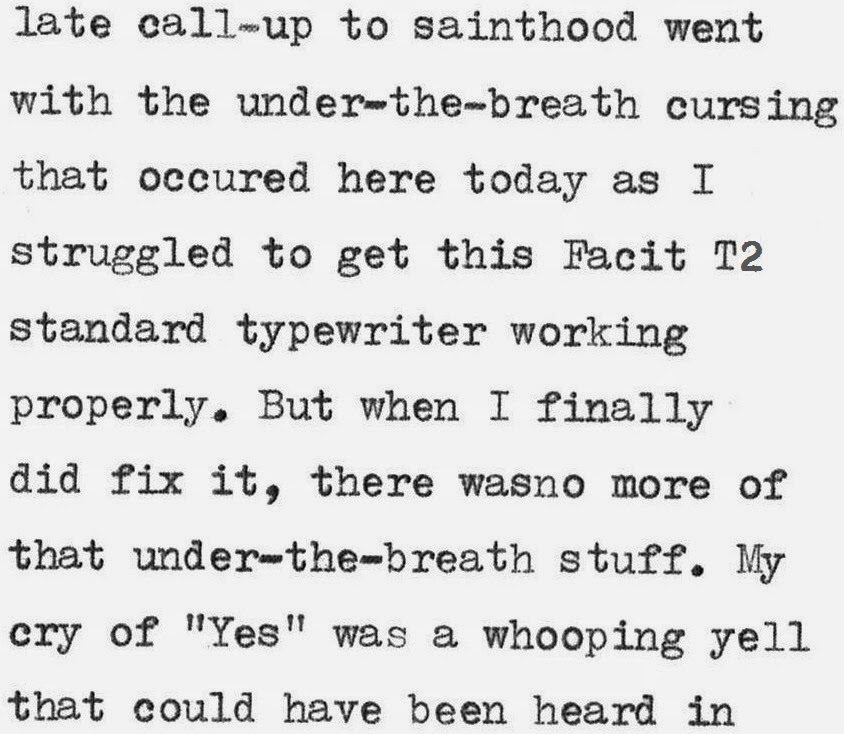 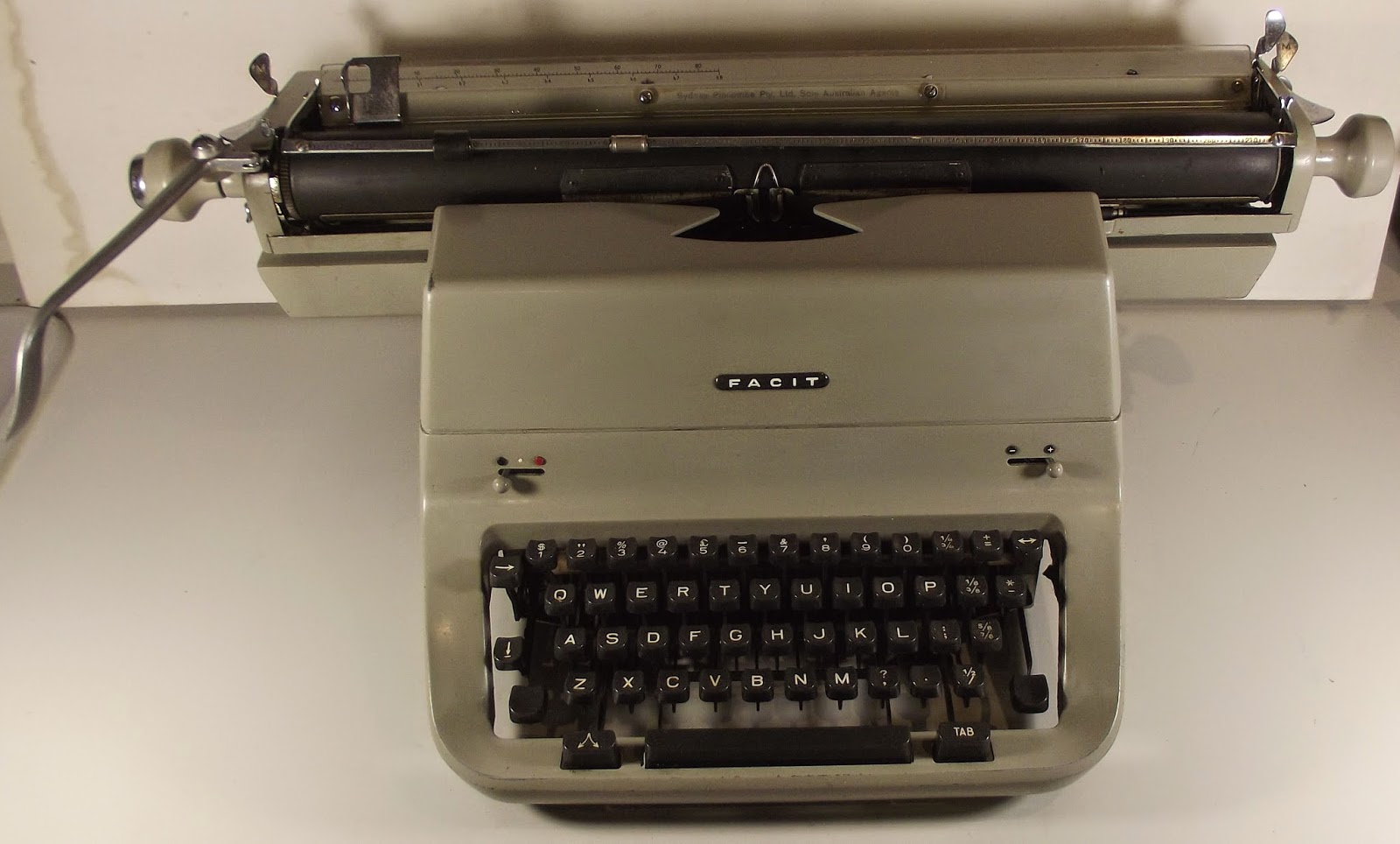 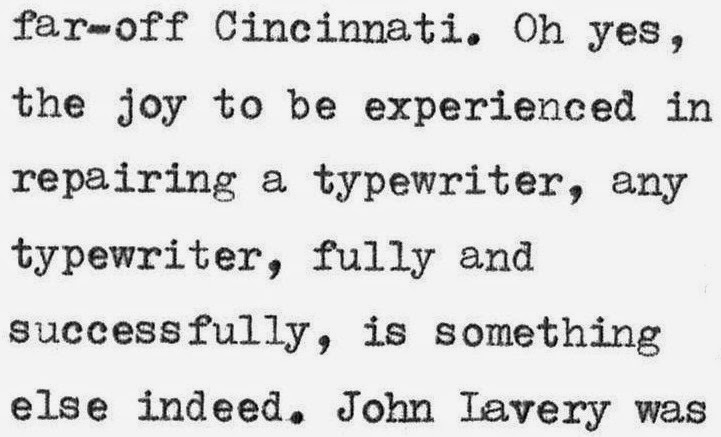 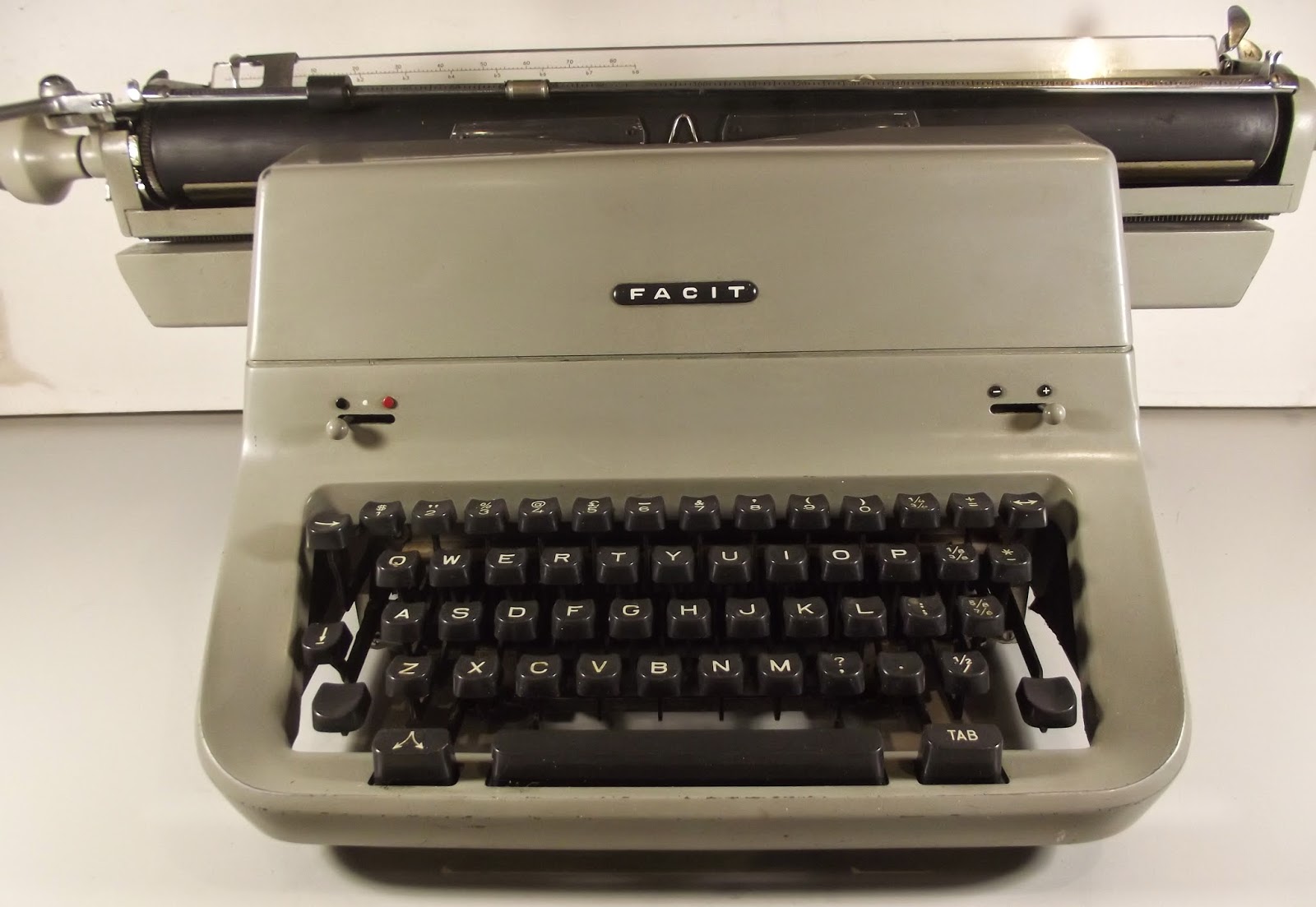 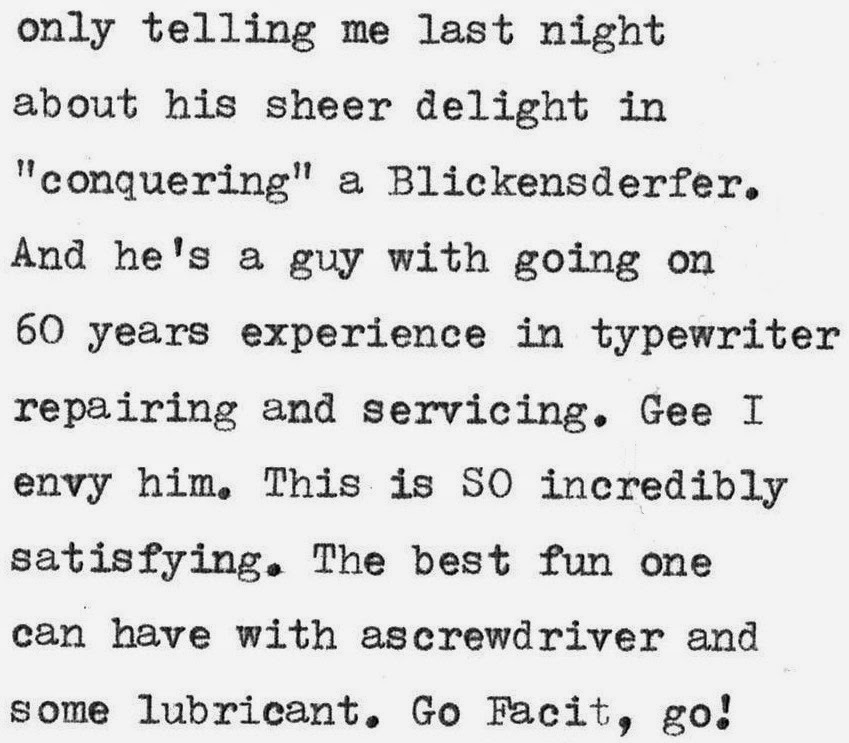 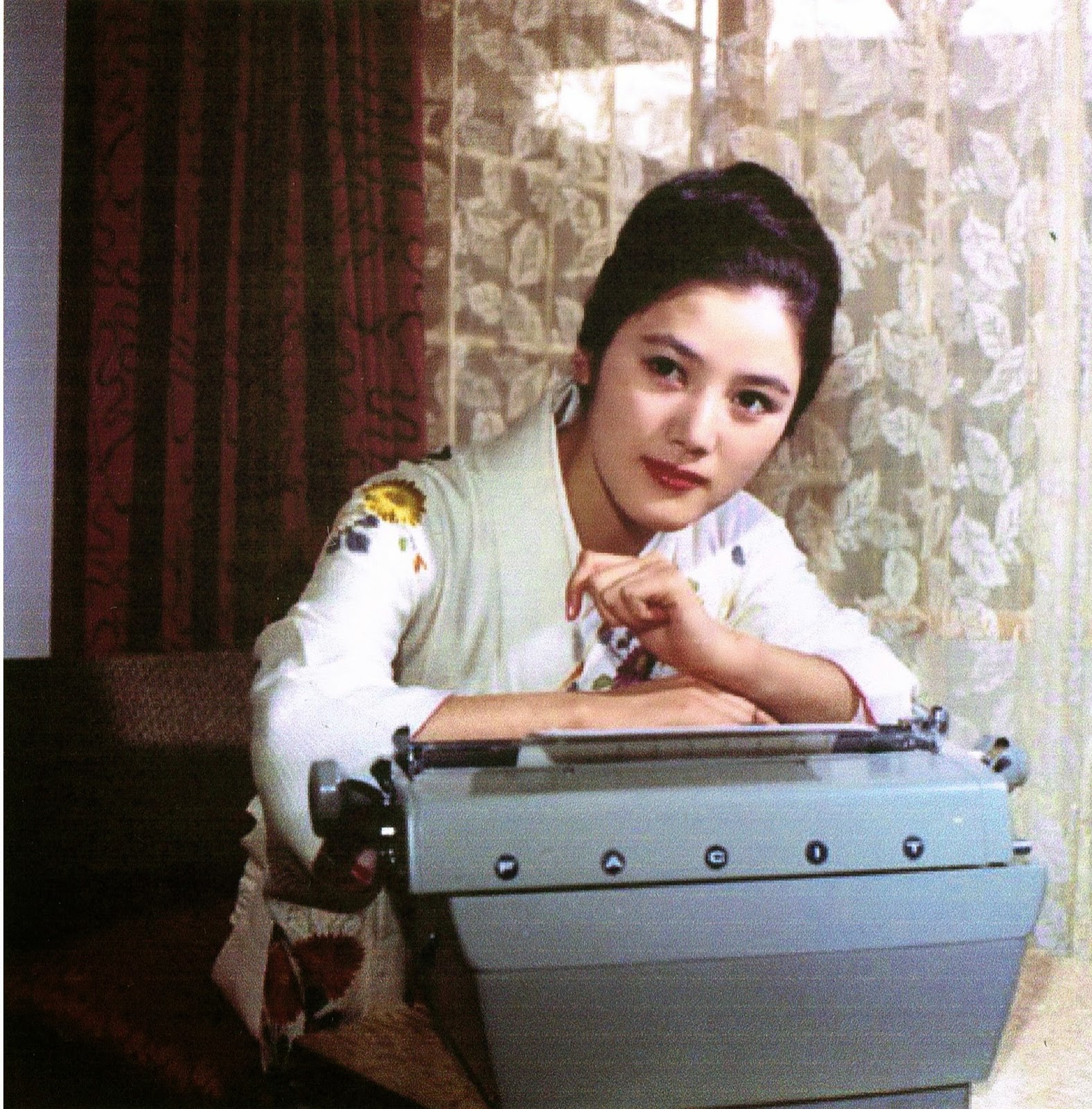 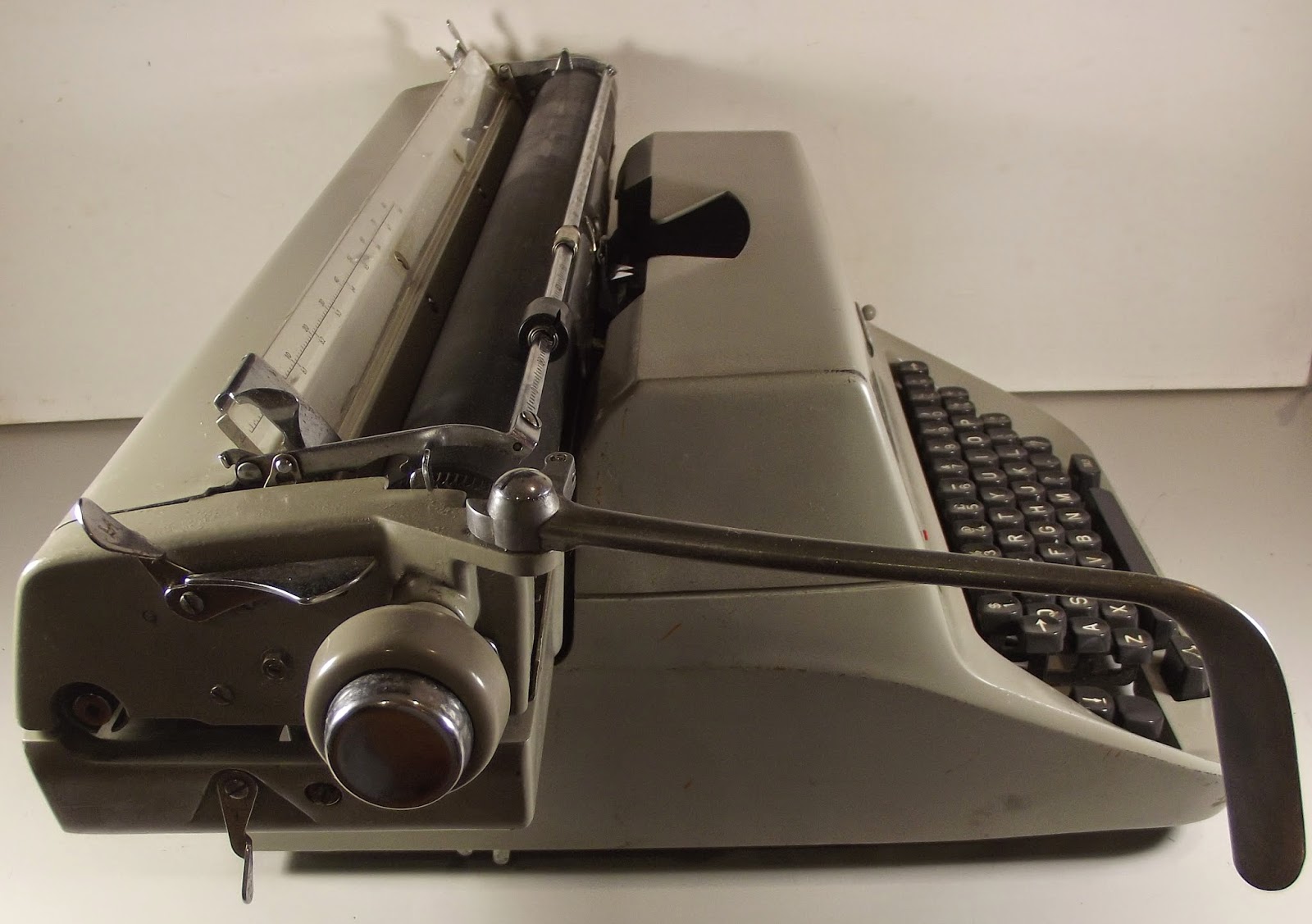 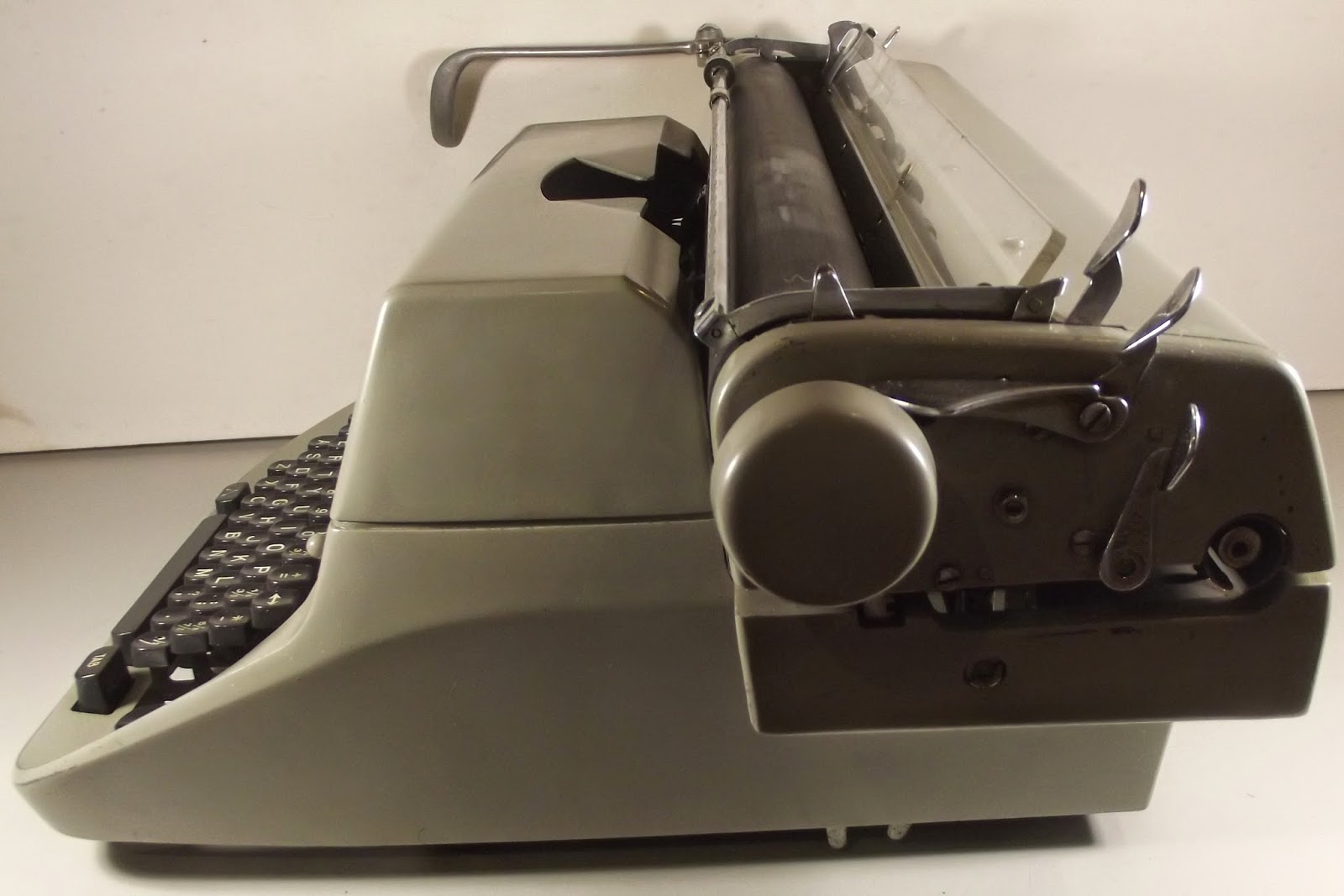 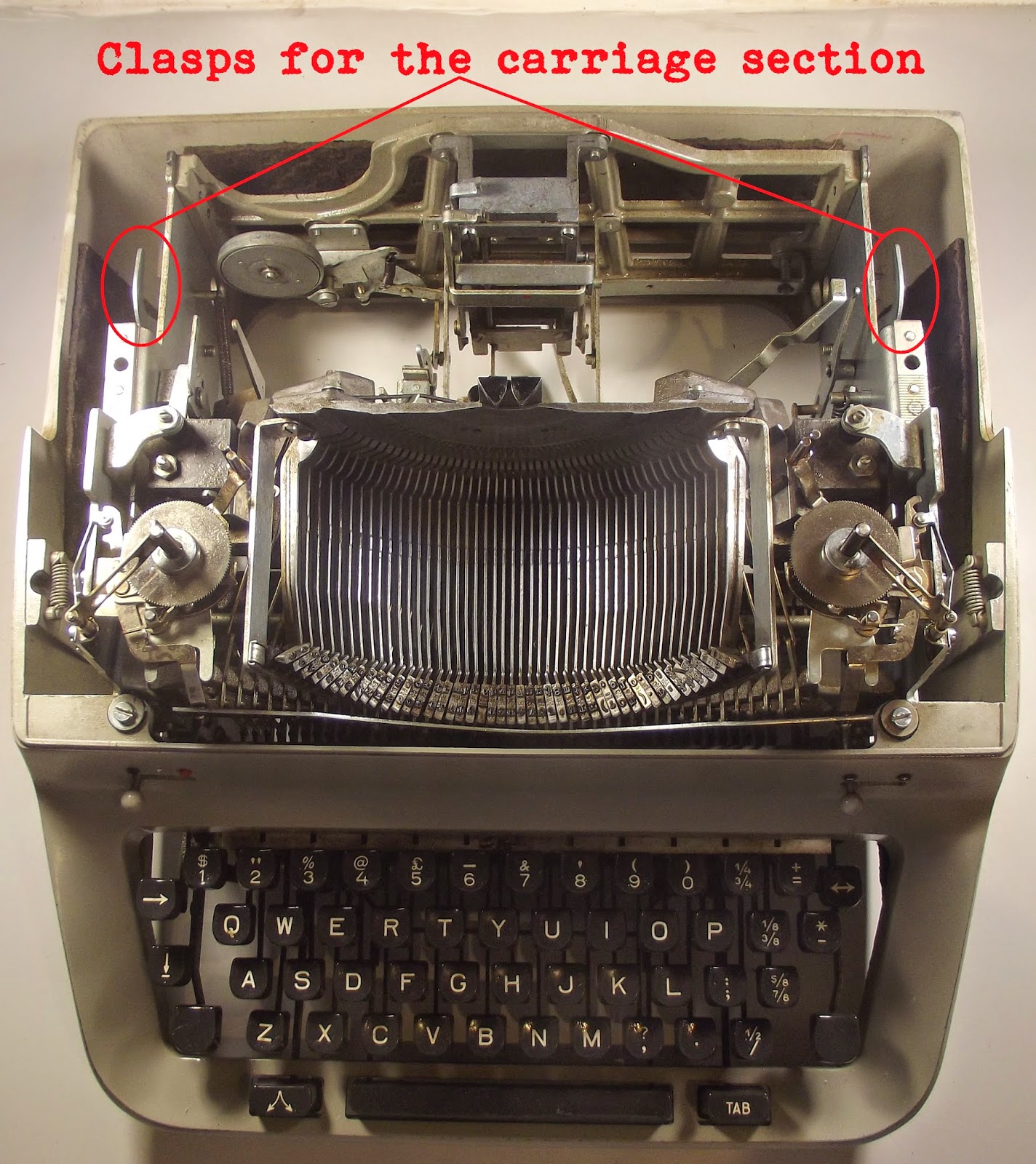 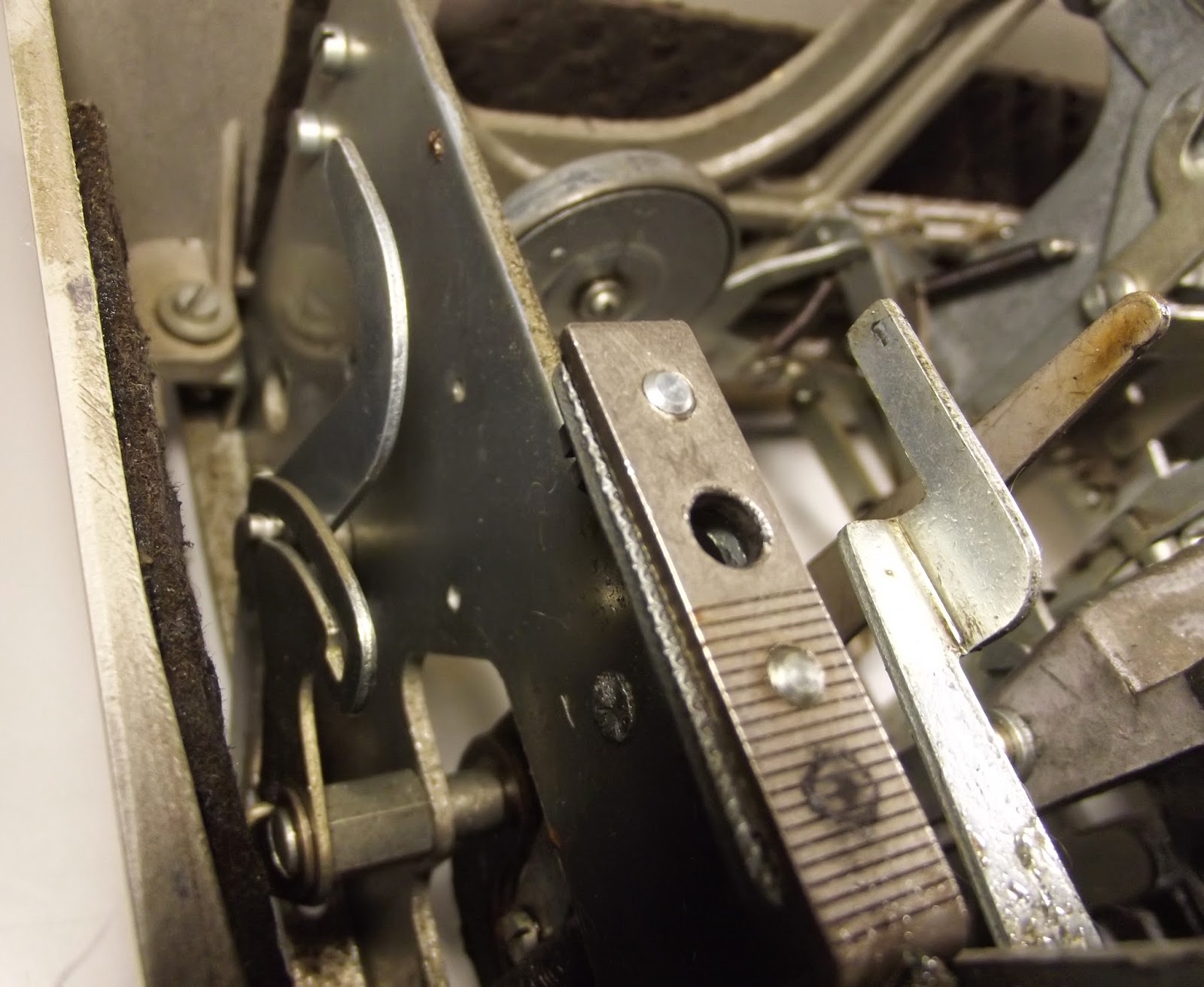 The demountable clips, one on each side, are activated by flicking a switch under the machine. 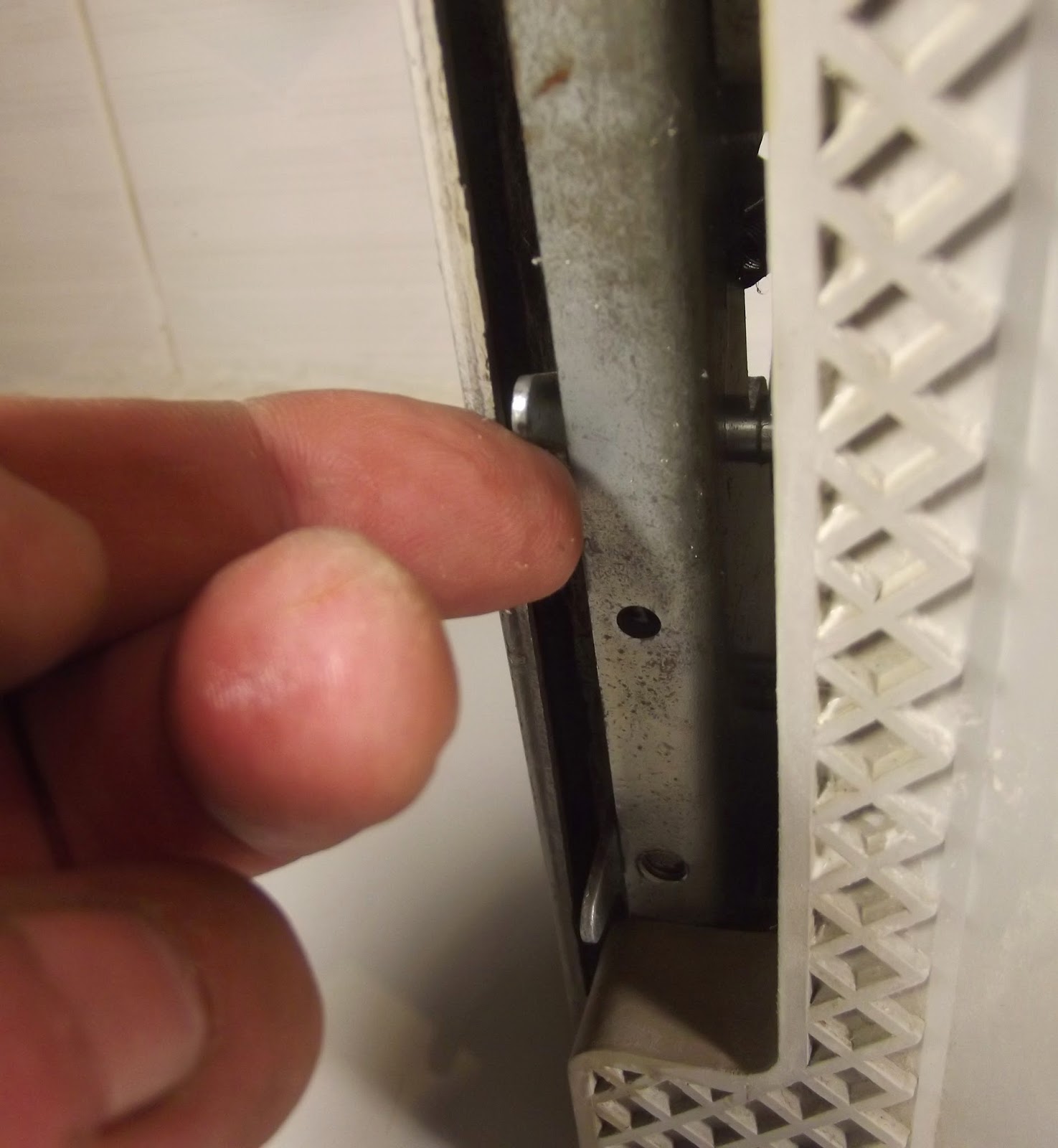 Resetting the clips before putting the carriage section back on. 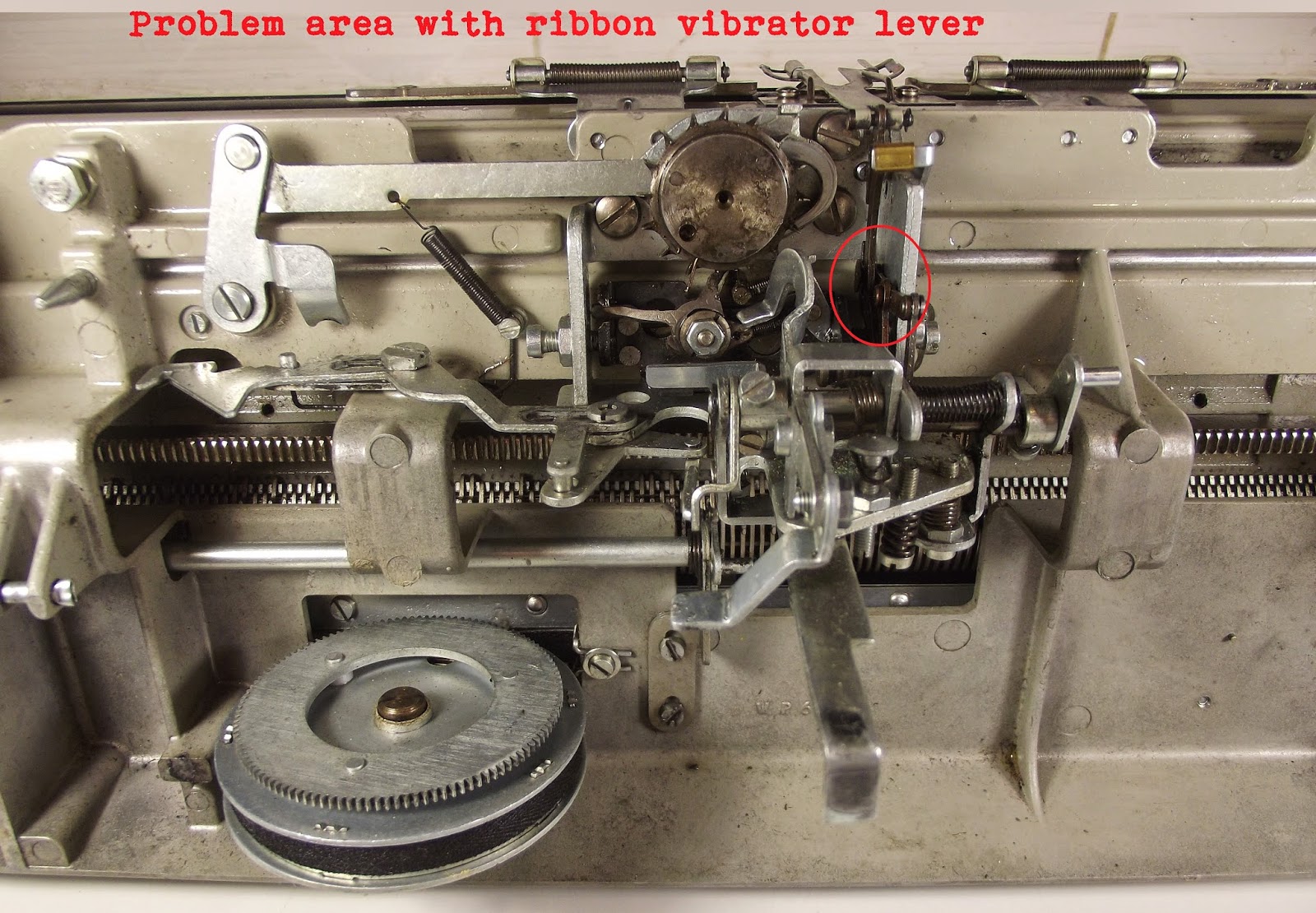 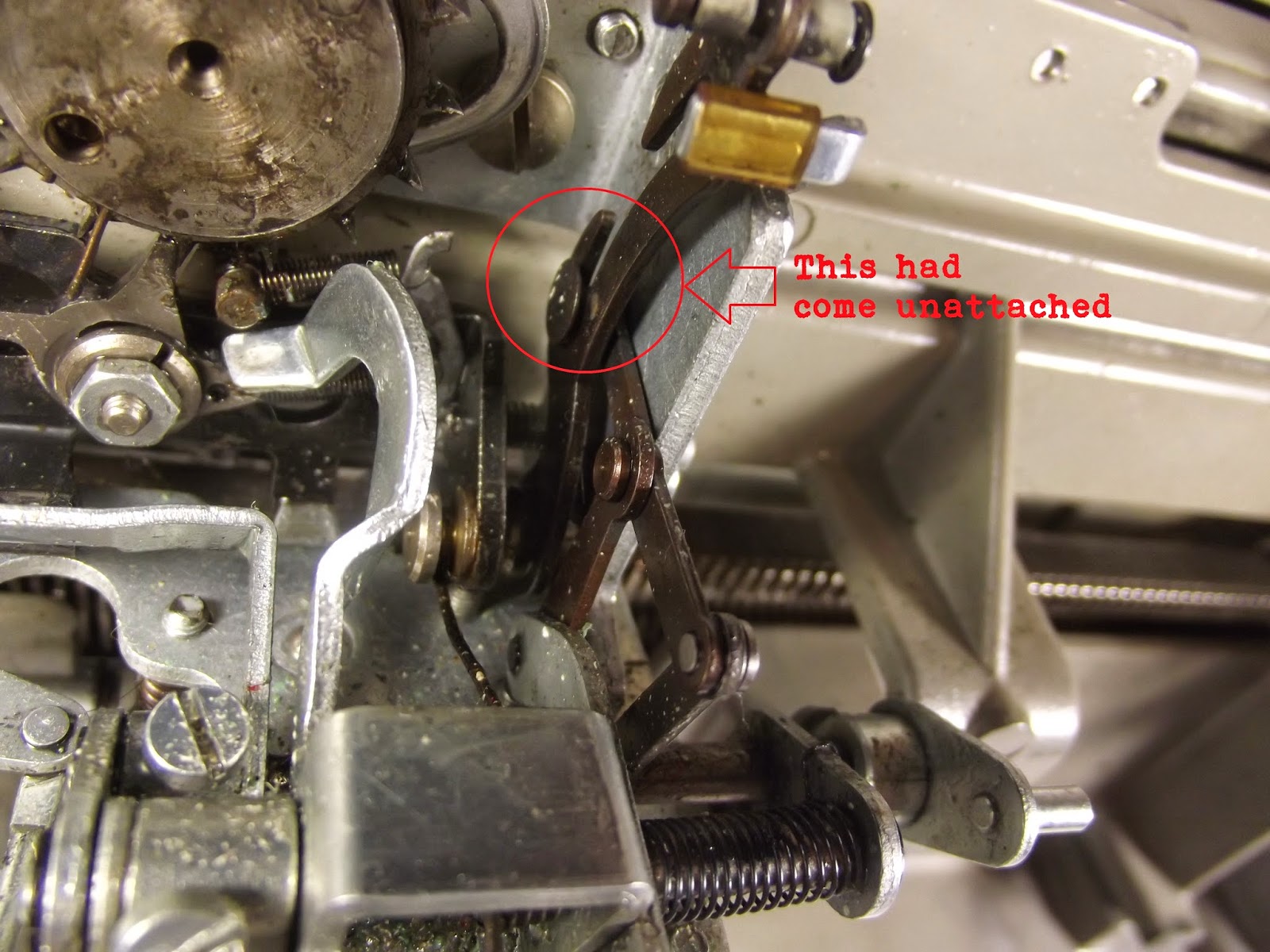 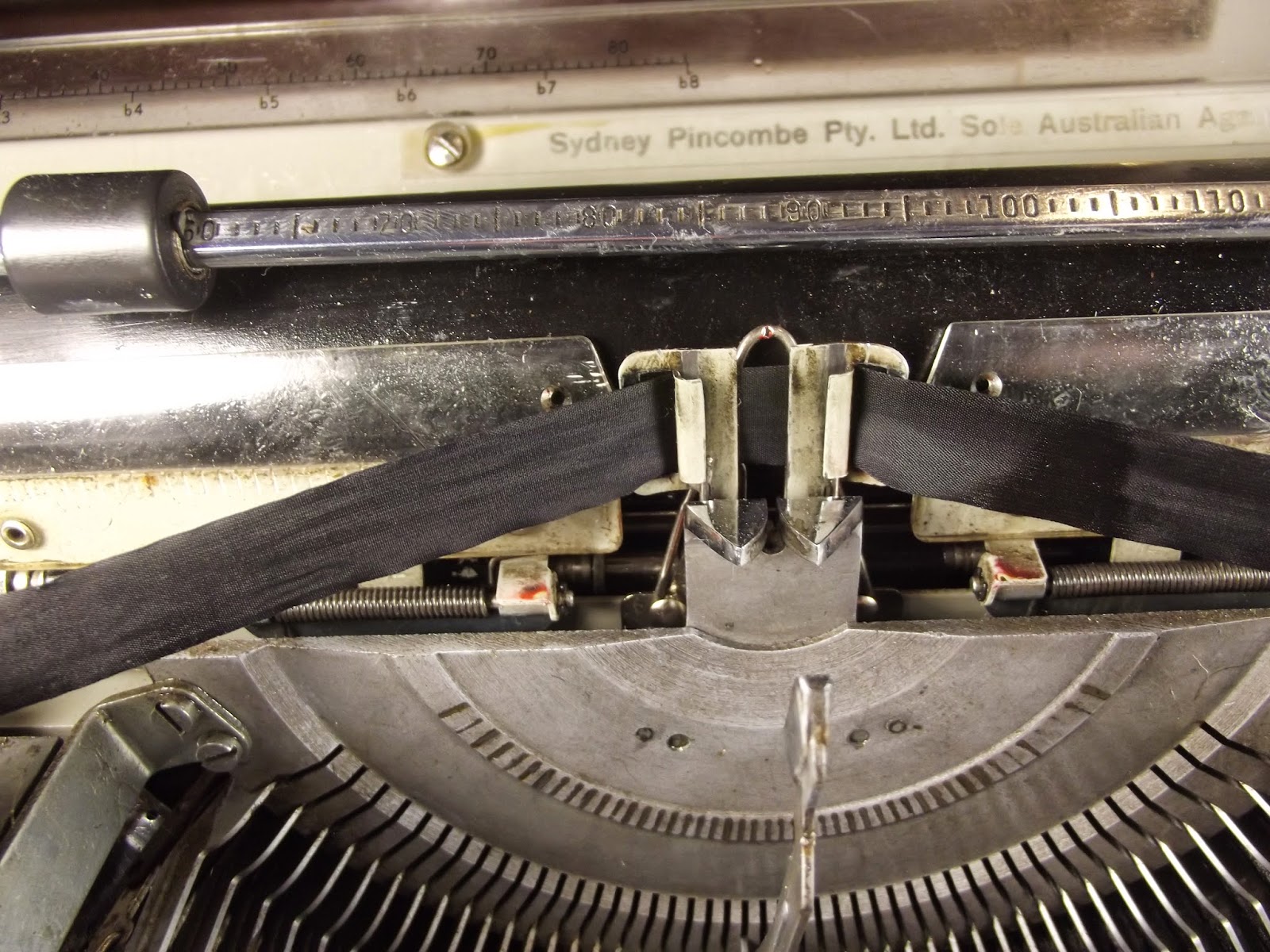 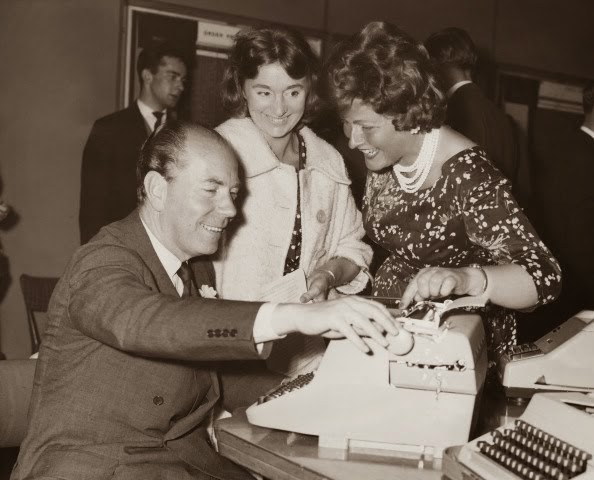 A nice feature of the T2 is the thick rubber base pad, which fits snugly on to the boots: 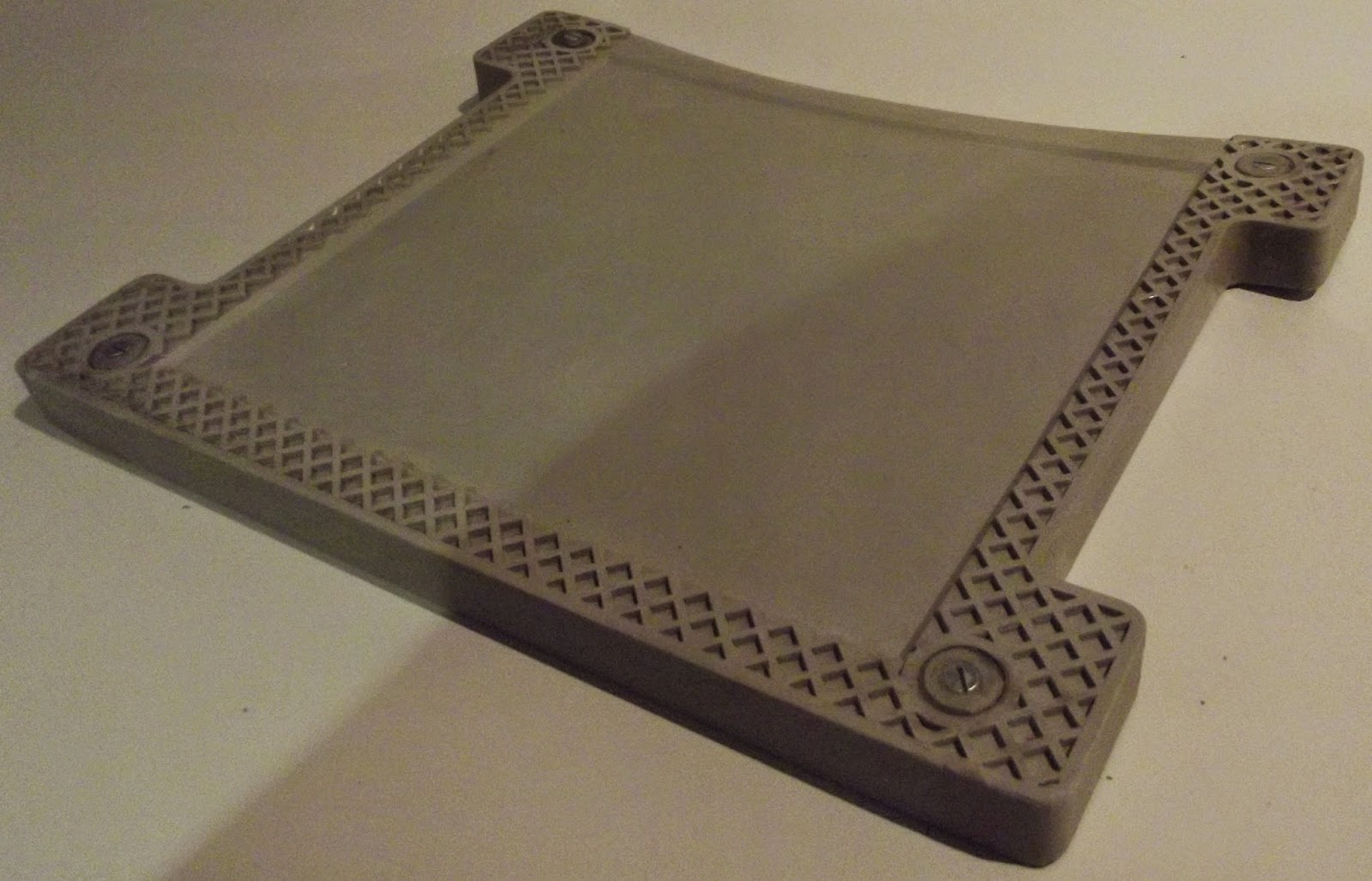 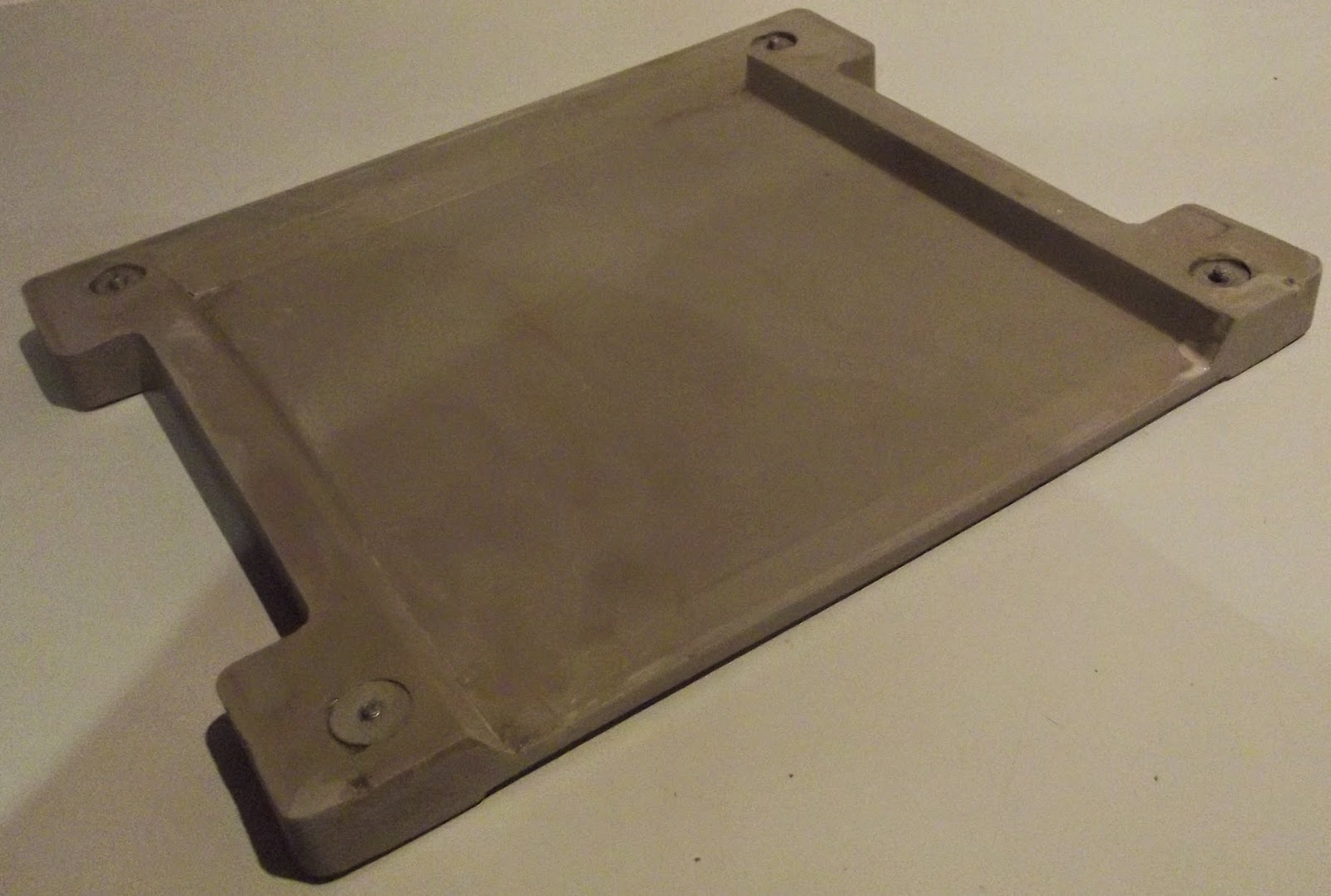 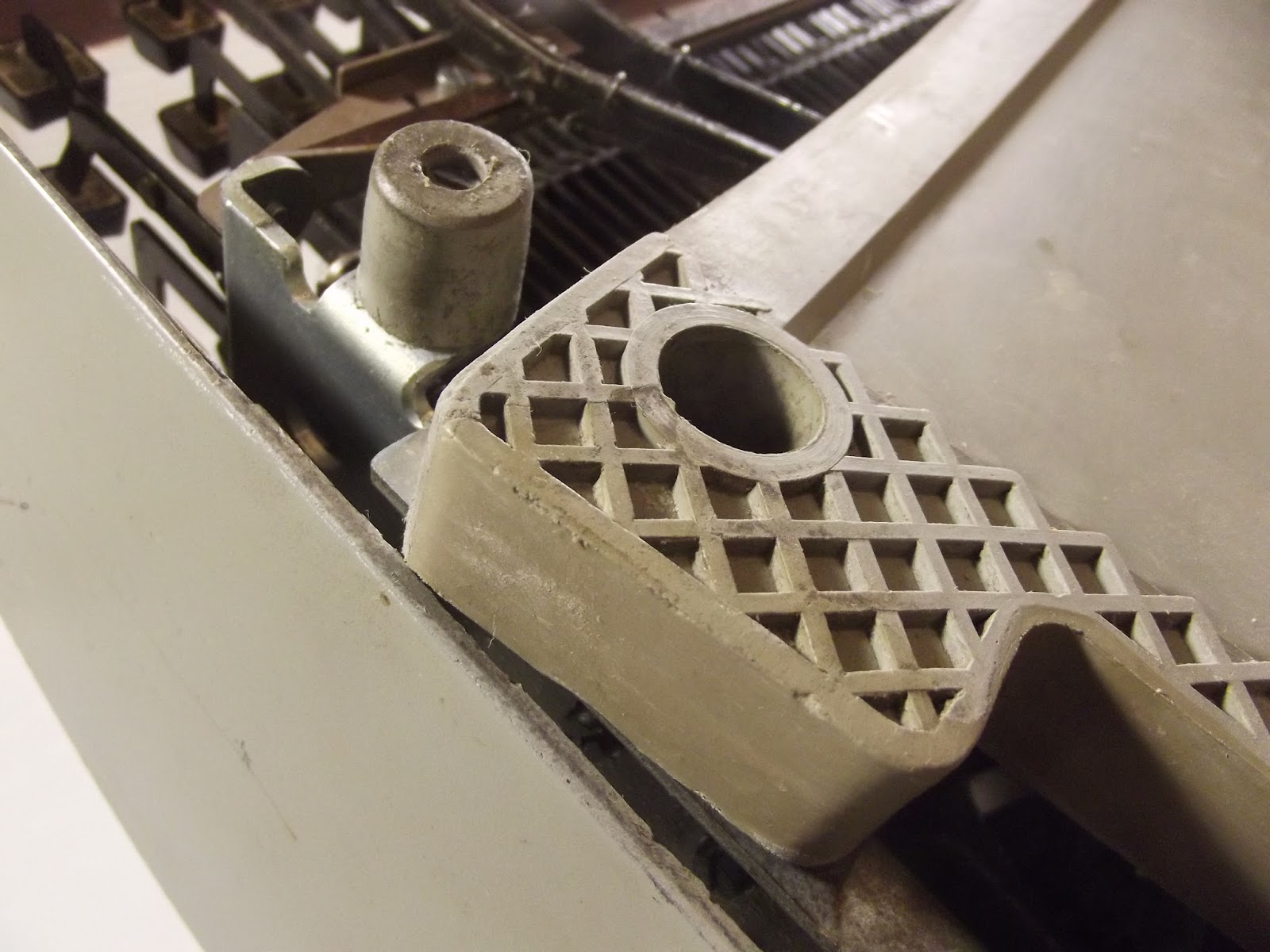 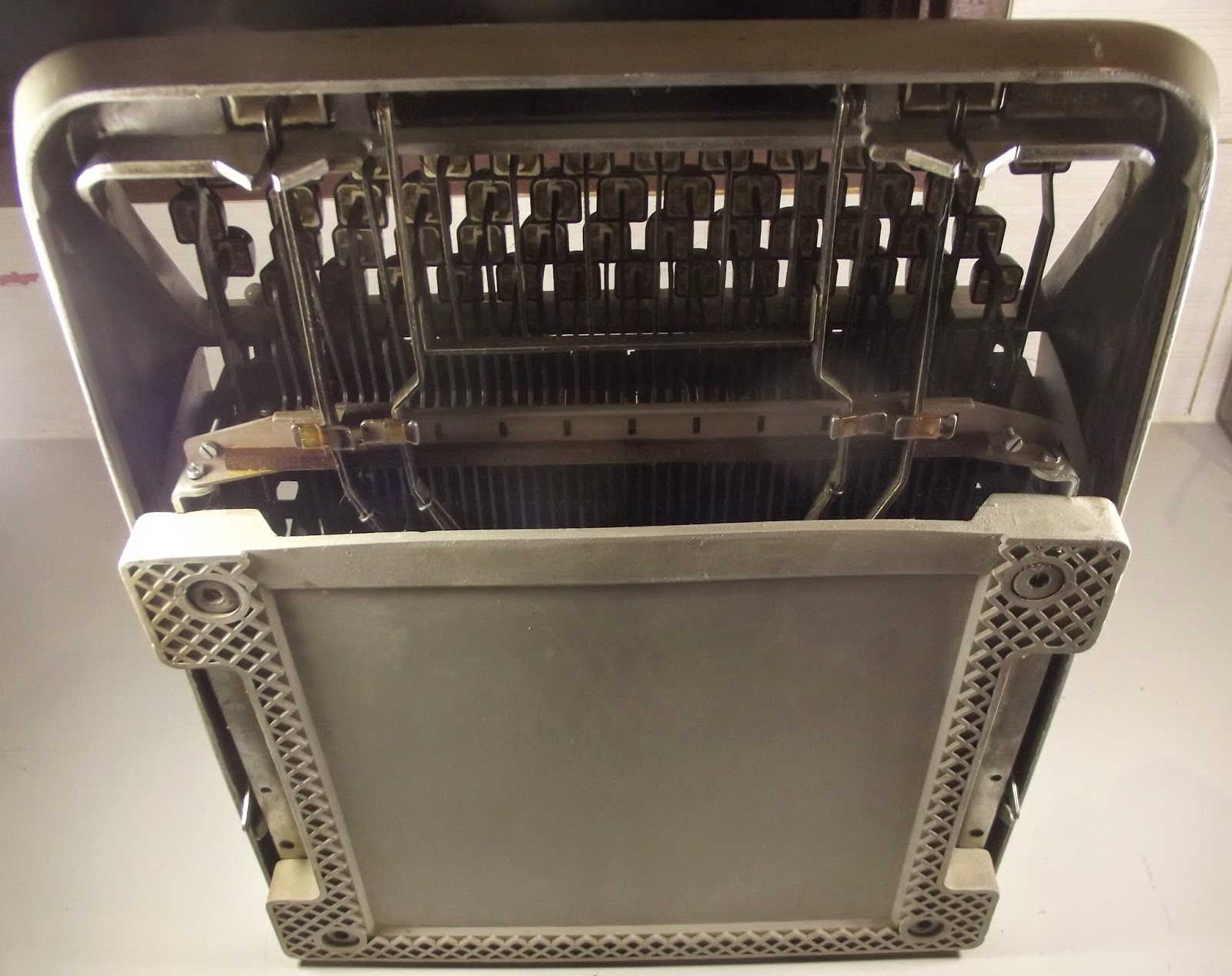 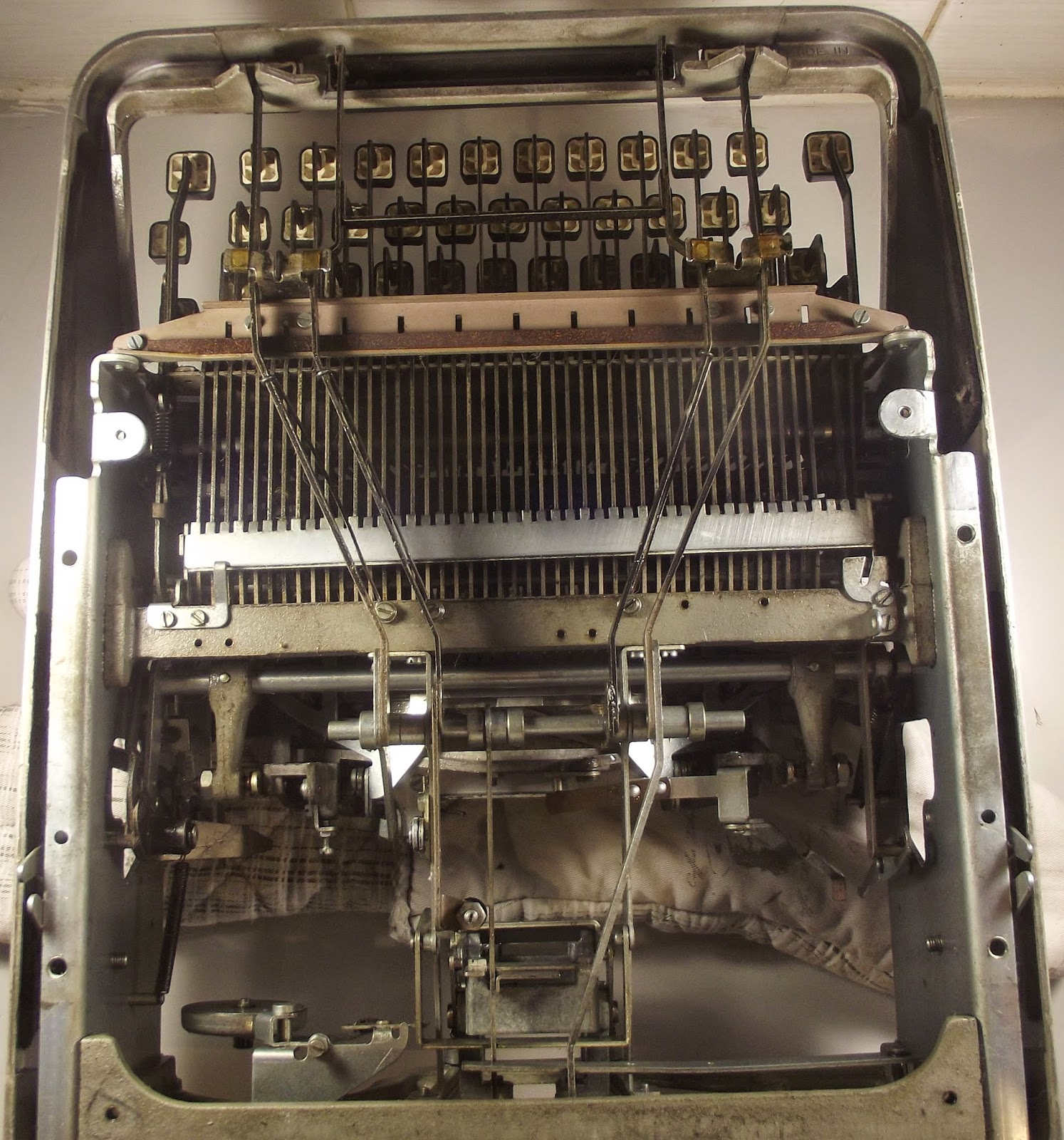 This is the T2's predecessor, the T1, along with a normal width carriage T2: 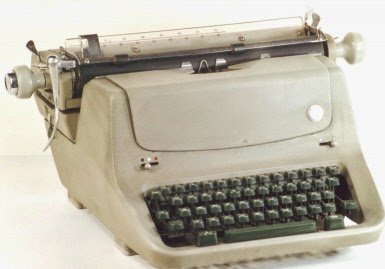 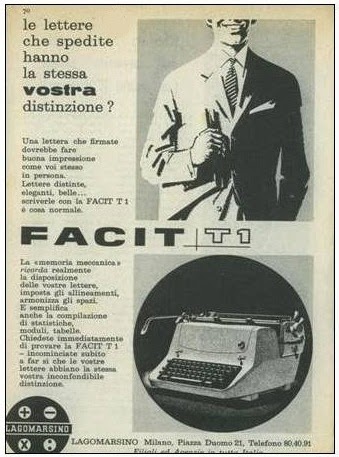 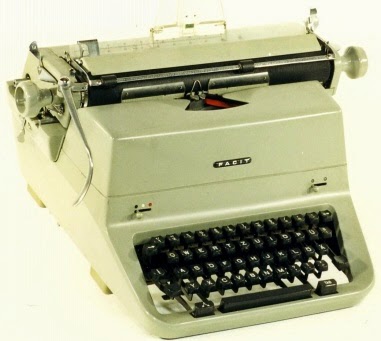 Fixing a dud is a simple pleasure that never seems to fade. You put in a good bit of sleuthing to out right as well. I can feel the buzz from here.

This machine reminds me a bit of the newer Olympia SG-3. It also had detachable carriages, a compact chassis and a very accessible mechanism (the whole front of the machine is removable, which makes changing ribbons and servicing the mechanisms a snap).

A job well done on a very lovely typewriter.

I thought I heard some joyful shouting from the antipodes! It is indeed very satisfying to understand a problem and get it fixed.

Now THAT is a typewriter -- very imposing, yet with some subtle styling details worthy of Facit and Bernadotte. I have never encountered one.

That is one huge typewriter! Very nice. Congratulations on your successful repair.

I would just like to say a loud and boisterous thank you sir for this post. If it hadn't existed I would have never been able to figure out how to fix my machine. I just purchased this same model and it had the exact same problem. Thank you so much!

That's a fine machine, I still have one in my home. Started early eighties, youngster with reporter aspirations I wanted to start off good at my study journalism. So I bought an electronic typewriter, which was basically a 9 dot matrix printer with chiclet board. I hated the output, so I traded it in for a Brother electric typewriter -basically a traditional typewriter with type-arms that were propelled to paper by an electric motor. During writing, I could not properly think on account of the ever whining motor. So when it came to writing my thesis, I loaded the Brother on the back of my bycicle and traded it in for this 15 kg behemoth. Due to the height, typing was easy, lever action was good and the typeface meant business. So I graduated, got my diploma. Thanks to this FACIT Blikman & Sartorius typewriter and my wit.
For an in between job, I had to take a typing test - typed 180+ characters per minute on a IBM Selectric II with just 4 finger, the reporter way - but was into wordprocessors from then on.

Just last week, my son asked for an electric typewriter, so I found an Olivetti ET55 Electronic typewriter. Nice design but could not hold a candle to this Facit beast.

I acquired my FACOIT T-2 just like yours (no tabulator bar) in August of 2018. Its serial number is: T2- 254745 dating it to 1962. My machine was an eBay Auction acquisition (I was the lone bidder on it) from a somewhat nearby Pawn Shop that was close enough for me to be able to take a car trip and pick up the machine in person. The machine weighs in at 33.51 lbs. The only issue that I have with it is that its T-2 12 CPI PITCH ”STANDARD ELITE“ font seems a bit small for such a large standard typewriter, but then again, I prefer a 10-pitch over a 12-pitch whenever possible.

A Facit T2 has just arrived in "far-off Cincinnati." Thanks to rereading this post, I now know that the carriage is easily removable. That will be very helpful in cleaning. It has a lovely typeface. I'm sending the platen off for recovering and can't wait to enjoy the full Facit experience.

I apologise to Richard. Somehow this comment by deleted by mistake after being published.

I have an Olympia SG3, which also has a detacheable carrier. It's from the 1970's, I guess, but works flawlessly. I was wondering if anyone here has compared Facits and Olympias...