The sexual outlaw sat alone in her room, considering her options. She had already been arrested in Philadelphia, Chicago, and Washington, DC. Here in New York, she had endured three months in the workhouse on Blackwell’s Island, an ordeal that almost killed her. Now, at 45-years-old, she had been convicted once again. The next morning, she was due to appear in court to face sentencing for her crime. But she wasn’t about to let that happen. Her things were all packed - her books, some clothes, and her most valuable possession: a well-used Remington typewriter. She could always leave, making her way to California, or perhaps back to London, where she had escaped once before, safely out of the reach of the agents of the American Inquisition who would not rest until she was silenced for good. She had been a fugitive before; she knew how to elude the police, the private detectives, and the men from the asylum. But what good would it do?
- Sexual Outlaw, Erotic Mystic: The Essential Ida Craddock, by Vere Chappell (2010) 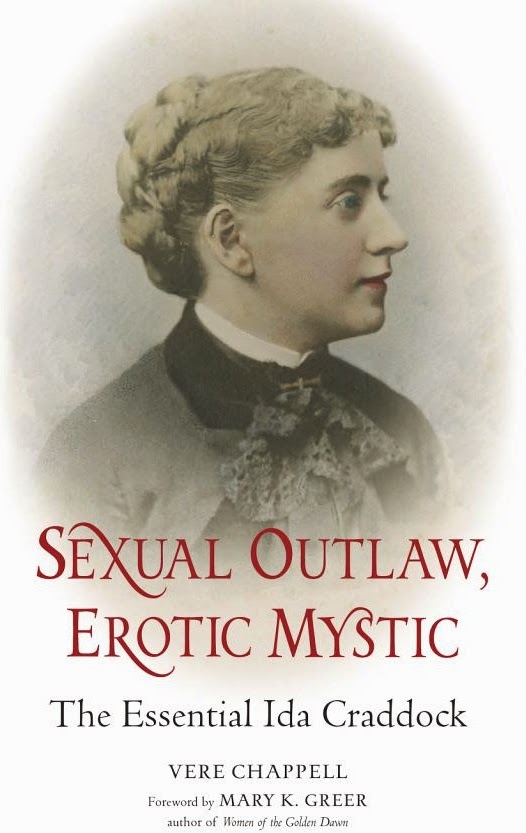 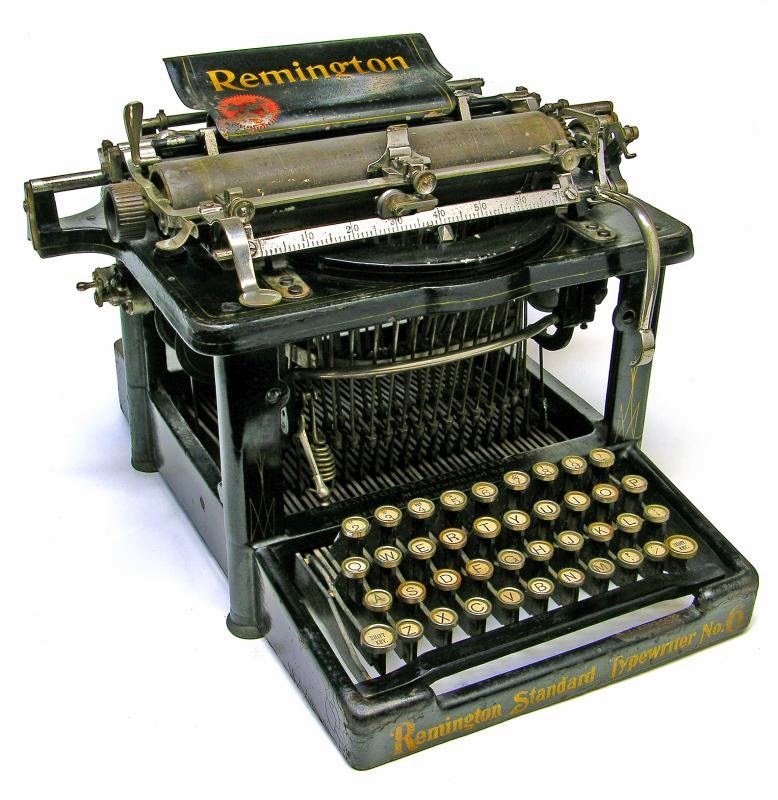 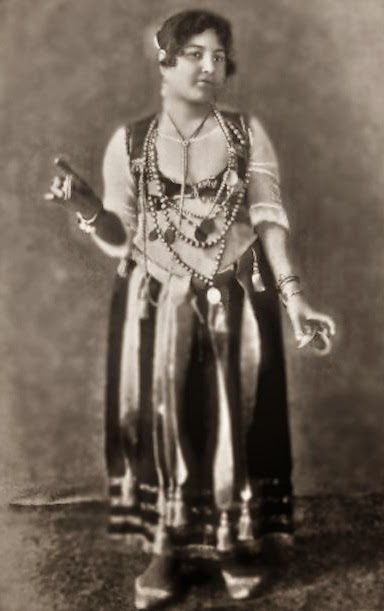 Fahreda Mazar Spyropoulos
The 1893 Chicago World's Fair - the Columbian Exposition - is best known to typewriter lovers today for the launch of the Blickensderfer typewriter. Back then, it had very special significance of a different kind for at least one [Remington] typewriter lover - sex counsellor and free speech and women's rights pioneer Ida Craddock. 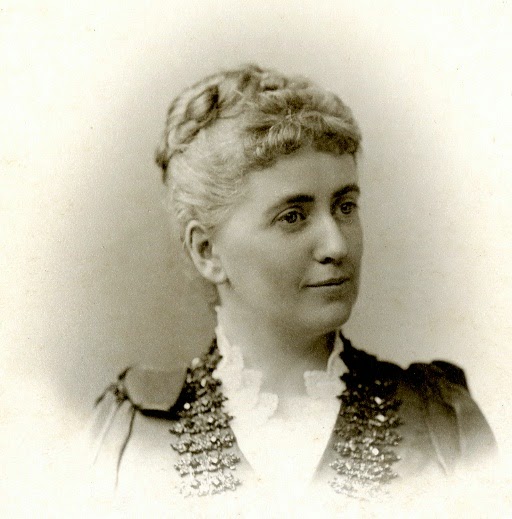 It looks like butter wouldn't melt in her mouth, yet Ida Craddock was one of the first people to discuss openly the female orgasm.
One of the major attractions of the Chicago Exposition was the original "Little Egypt", Syrian-born Muslim Fahreda Mazar Spyropoulos (1871-1937), who appeared as Fatima, one of the "The Algerian Dancers of Morocco" raqs sharqi (belly dancers) at the "Street in Cairo" Egyptian Theatre on the Midway at the World's Fair.
Thousands of visitors to the fair flogged to watch Fatima - dressed in a gauze shirt, vest and skirts reaching to her ankles - almost imperceptibly move her feet and legs as she swayed her arms and torso in an undulating motion. But a few other, less enlightened souls saw her act as "hoochee-coochee", "shimmy and shake", indecent or simply downright obscene.
Chief among the latter was the self-appointed "weeder in God's garden", censor and crusading keeper of US morals Anthony Comstock (1844-1915), founder of the New York Society for the Suppression of Vice, who would so proudly claim he had driven 15 people to suicide in his "fight for the young". 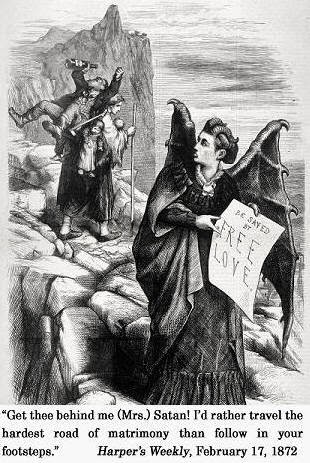 One of those 15 unfortunate people was Ida Craddock.
It had taken almost a decade of hounding, however, for Comstock to achieve his cherished goal of having Craddock take her own life. In the meantime, Craddock had at least had the chance to justifiably condemn Comstock as a "wicked and depraved man".
Comstock's persecution of Craddock - which extended to Comstock confiscating Craddock's most treasured possession, her Remington typewriter - started at the 1893 Chicago World's Fair. Craddock's crime, one worthy of the ultimate punishment? Craddock had sprung to the defence of "Little Egypt", after Comstock had demanded Fatima's act be stopped. Craddock promptly sat down at her Remington and wrote a four-page defence called Danse du Ventre, describing it as "religious memorial inculcating purity and self-control". Fatima went on dancing, while Comstock went on fuming - and plotting to put an end to not the raqs sharqi, but to Craddock herself.
Comstock began by using his position as the US Post Office's "special agent" to declare "unmailable" - as "obscene, lewd, and lascivious" - Craddock's published pamphlet about the dance. Quite how Comstock came to believe Craddock's piece qualified as an "article or thing intended for the prevention of conception or procuring of abortion" is anyone's guess.
Craddock declared, "I need make no plea for the propriety of my subject. What concerns us all is eminently fit for discussion by all, and too much light cannot be thrown upon it."
By this, Craddock was referring to the "mystical" sex counselling she provided in a small office on Dearborn Street, Chicago. She also offered mail courses in her efforts to prevent "sexual evils and sufferings”.
This led directly to Craddock's next confrontation with Comstock, in 1899, when the Chicago Clinic published her pamphlet, Right Marital Living. Craddock was indicted in the Chicago Federal Court on October 27 that year, charged with mailing copies of the pamphlet. She stayed out of jail only because criminal lawyer and free-speech advocate Clarence Darrow posted her bond. Craddock pleaded not guilty and the prosecution subpoenaed Comstock as a witness. Craddock changed her plea to guilty in return for a suspended sentence. But she moved to New York and continued to mail pamphlets to clients. Her Manhattan apartment was raided by Comstock himself, who removed 600 offending publications and her Remington typewriter. 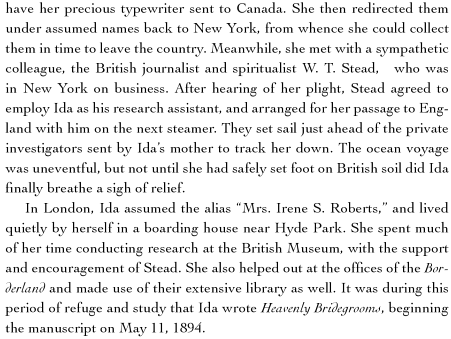 On March 5, 1902, Craddock was subjected to a Comstock sting and arrested under a New York version of the "Comstock Law", because of her mailing of The Wedding Night. She was sentenced to three months in the Blackwell's Island workhouse. Upon her release, Craddock was immediately re-arrested under the federal "Comstock Law". At her trial on October 10, She refused an offer to escape a prison sentence by pleading insane. Facing five years' imprisonment, on the morning she was to be sentenced, October 17, Craddock inhaled natural gas from the oven in her apartment and slashed her right wrist. She died, aged just 45. 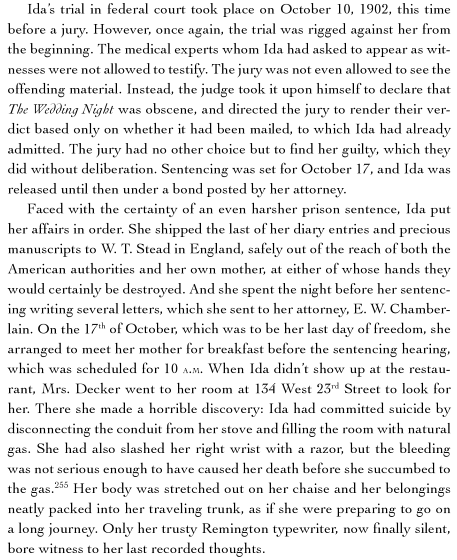 In a letter to her mother, she wrote, "I maintain my right to die as I have lived, a free woman, not cowed into silence by any other human being." 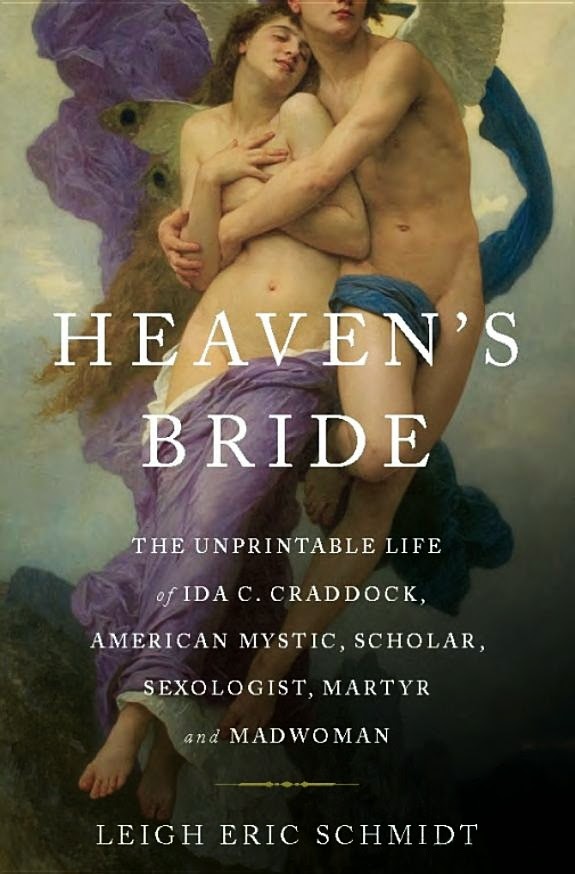 Ida Craddock was born in Philadelphia on August 1, 1857. In October 1882 she was recommended by the faculty for admission into the University of Pennsylvania as its first female undergraduate student, having passed the required entrance exams. Her entrance was blocked by the university's board of trustees. Craddock instead concentrated on a shorthand-typist career, taught shorthand at Girard College, Philadelphia, and published a stenography textbook, Primary Phonography. 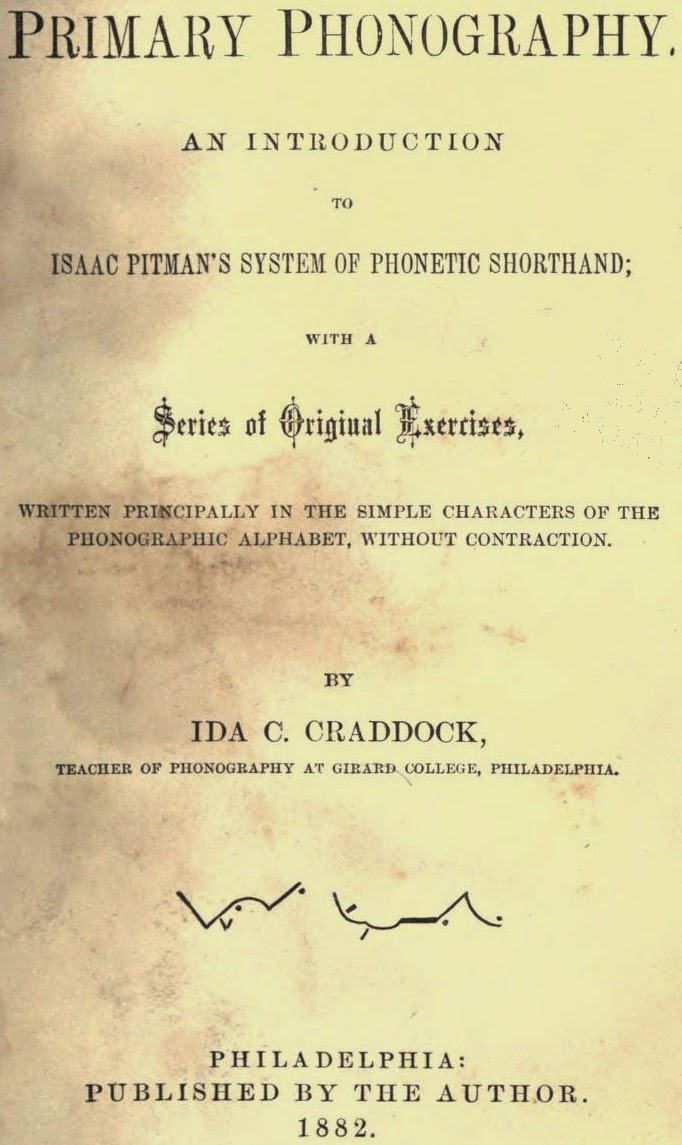 From 1887 Craddock developed an academic interest in the occult through her association with the Theosophical Society. She tried in her writings to synthesise translated mystic literature and traditions from many cultures into a scholarly, distilled whole. As a freethinker, she was elected secretary of the Philadelphia chapter of the American Secular Union in 1889. Craddock became a student of religious eroticism and declared herself a priestess and pastor of the Church of Yoga. Never married, she claimed to have a blissful ongoing marital relationship with an angel named Soph. She even stated that her intercourse with Soph was so noisy as to draw complaints from her neighbours. 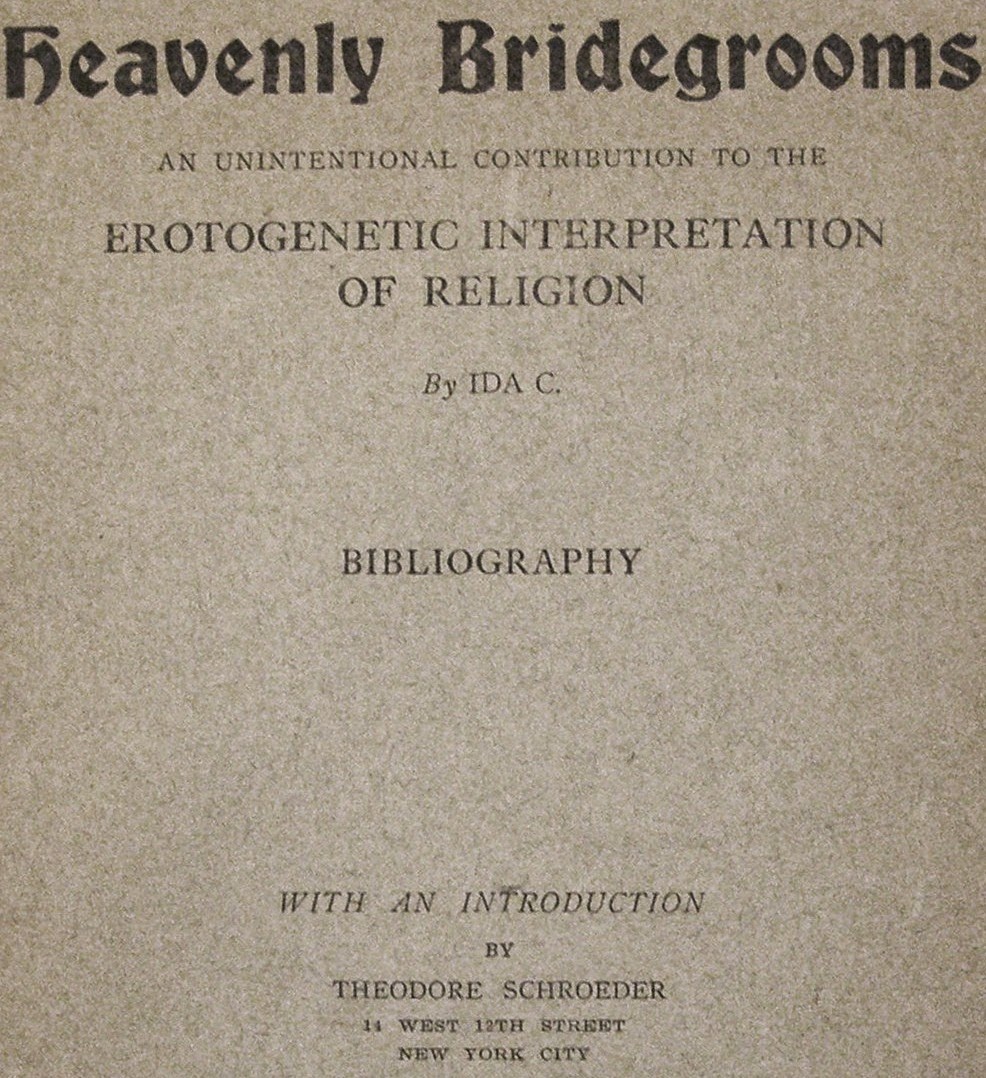 A gifted and compelling writer, Craddock published many serious instructional tracts on human sexuality and appropriate, respectful sexual relations between husband and wife. Among her works were Heavenly Bridegrooms, Psychic Wedlock, Spiritual Joys, Letter To A Prospective Bride, The Wedding Night and Right Marital Living. Aleister Crowley reviewed Heavenly Bridegrooms in his The Equinox, say that it was "one of the most remarkable human documents ever produced, and it should certainly find a regular publisher in book form. The authoress of the MS claims that she was the wife of an angel. She expounds at the greatest length the philosophy connected with this thesis. Her learning is enormous ... This book is of incalculable value to every student of occult matters."
Her writings on supernatural topics also continued throughout her life. One of her last books on this subject was The Heaven of the Bible (1897). 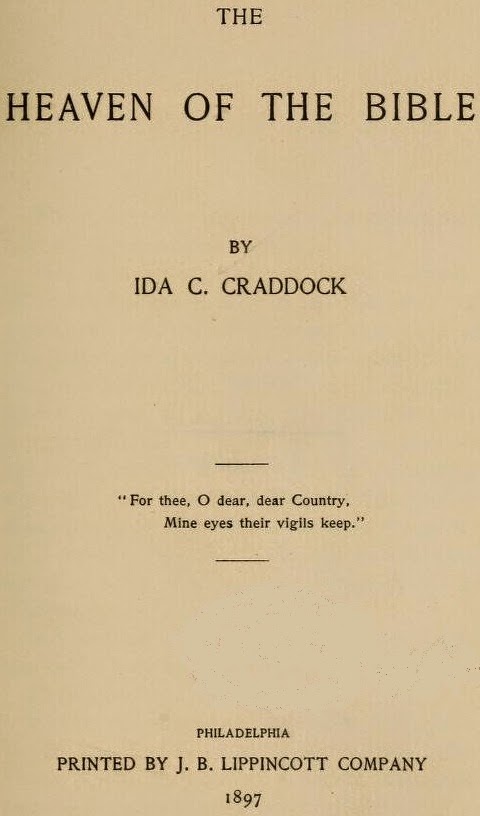 (With thanks to Mark Uhlmann)
Posted by Robert Messenger at 16:02

What a tragic, yet inspiring story. No wonder the typewriter is often championed as the tool of liberated women.