'Put a Black In For Me'*: Carbon Paper, its Positive Impact on Typewriters, and its Cincinnati Champion

*For many decades during the 20th Century, the plea "Put a black [carbon paper] in for me" was heard in newsrooms across the Western World. Often journalists supplemented their meagre pay by acting as "stringers" for other newspapers in other parts. Management generally turned a blind eye to this practise, as, while considered highly unprofessional, it helped offset demands for pay rises. If a colleague was typing out a story thought to be possibly newsworthy elsewhere, the "stringer" would ask for a carbon copy of it with this expression. The proceeds were usually shared.
It was while being interviewed and seeing copies of stories being made in just such a way, using what were then called "blacks", in a wire news agency office in New York on July 26, 1868, that started Cincinnati's
LEBBEUS HARDING ROGERS
on his path to perfect carbon paper.
Journalists working for the New York Associated Press, it was later revealed, had been sharing news stories with United Press under a secret agreement to split profits.
But, of course, carbon paper was to have far greater implications for typewriters than simply providing copies of news stories. 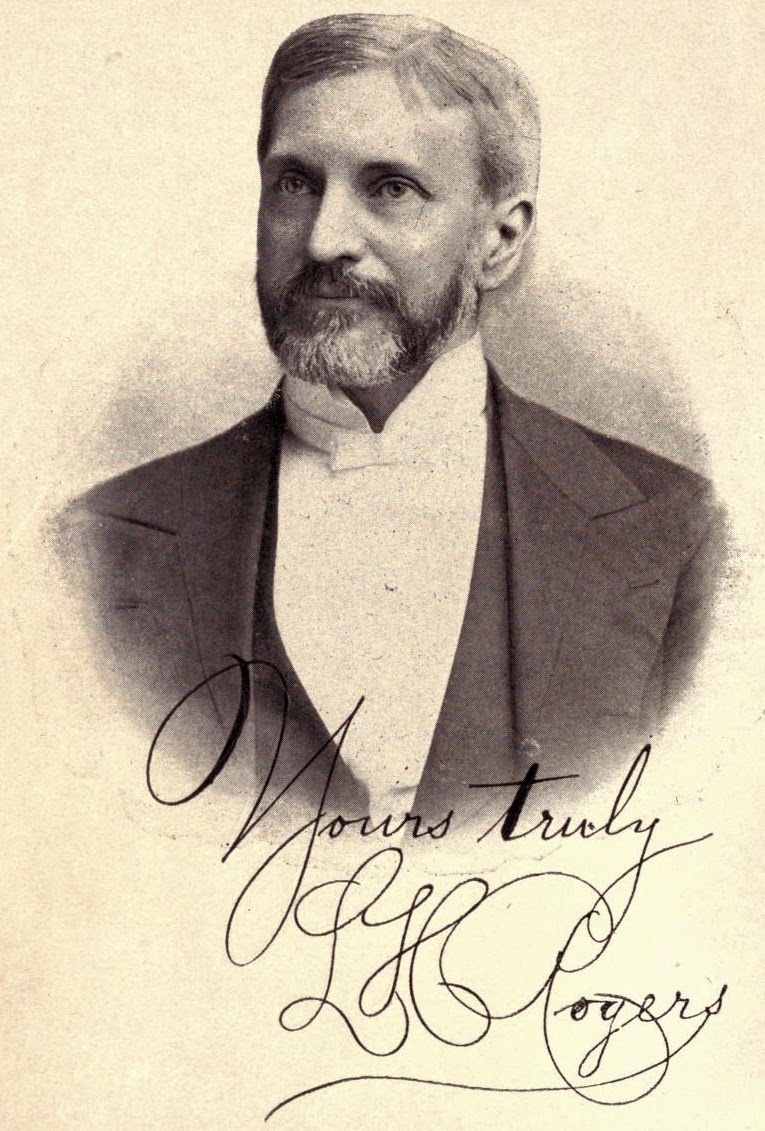 On the afternoon of Friday, February 14, 1873 - Christopher Latham Sholes' 54th birthday - Henry Harper Benedict, private secretary to Phil Remington, head of E.Remington & Sons, walked out from a room in Small's Hotel in Ilion, New York, whispering in Remington's ear as he did so. "This idea will revolutionise business," said Benedict. "Don't let them know we are crazy about the invention, but we must not let it get away." 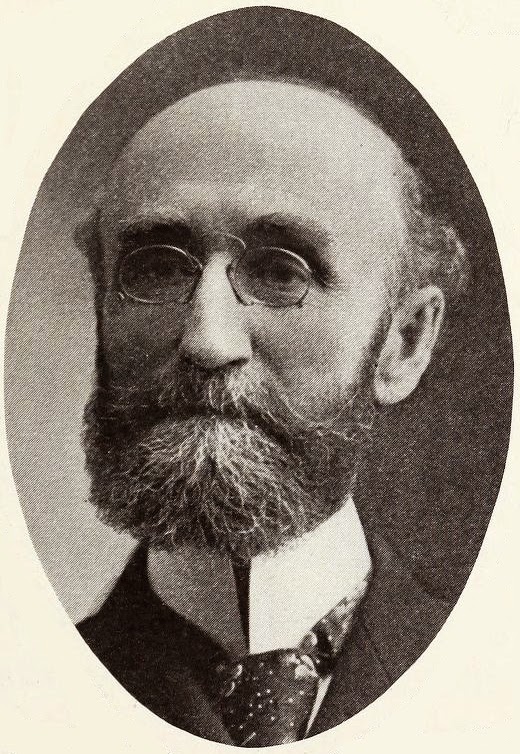 Henry Harper Benedict (1844-1935)
Benedict was not talking about carbon paper. He and Remington - along with two Remington engineers - had just seen James Densmore and George Washington Newton Yost demonstrate a crude, spring-powered model of the Sholes & Glidden typewriter, made in a makeshift factory on a millrace in Milwaukee four months earlier.
Yet that demonstration had also been witnessed by a "disinterested party" - one other than those representing Remington or Sholes. He was Cincinnati-born Lebbeus Harding Rogers, a then 25-year-old clerk with the New York Writing Manifold Company. 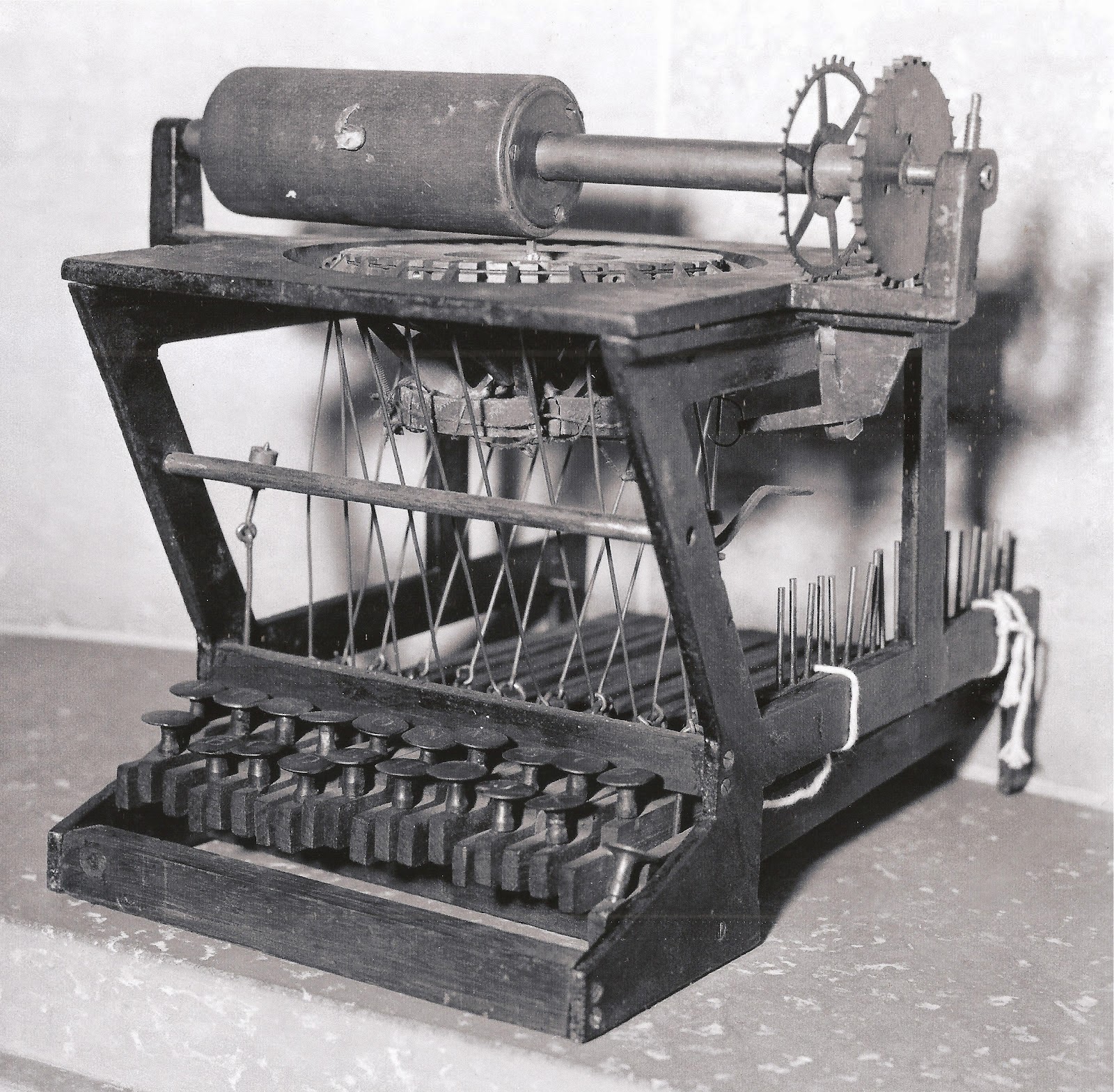 'Experimental model of 1873'
And, like Benedict, Rogers had had a vision of the future of business as he watched Densmore tap away gingerly on the keys of the typewriter. He, too, was determined he would "not let it get away". But in his case, it had everything to do with carbon paper.
It is interesting that at the time Rogers should list himself as a clerk with the "Writing Manifold Company". Rogers himself had "organised" the company, in 1870, as the Rogers Manifold Carbon Paper Company. Yet he had almost certainly done so with his own funds. Earlier that same year, while still living in Cincinnati with his widowed Kentucky-born mother Cordelia Draper Rogers and two brothers, Rogers had listed himself as a wholesale grocer with a massive "value of permanent estate" of $22,000. And he was only 22! A young man who still clung to an adolescent passion for kite-flying.
While the spring-powered Sholes and Glidden was being made by Densmore and Matthias Schwalbach and his artisans in Milwaukee in mid-October 1872, Rogers patented an "improvement in carbonized paper" in Washington: 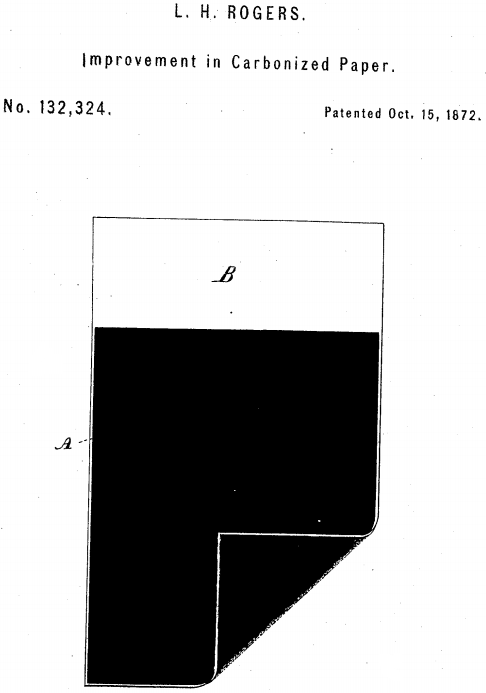 From the time he had seen carbon paper being used to copy news stories in the offices of the New York Associated Press on his 21st birthday in July 1868, until the day he saw the Sholes & Glidden being demonstrated in Ilion in February 1873, Rogers had struggled to find a suitable writing implement to get the best out of carbon paper.

Quills, pens (from the early 19th century), pencils and even early styli had, successively, tended to tear the paper when applied firmly and to otherwise not make good copies. Rogers had toyed with a stylus (patented 1880, above). The typewriter was the answer to his dreams. And while the advent of the typewriter unquestionably helped Rogers make an even greater fortune, there is absolutely no doubt that carbon paper propelled the typewriter industry to its heady heights in the late 19th and early 20th century. The ability to manifold correspondence, to keep on record or circulate, as many as seven or eight copies at a time, made the typewriter the huge success it was as a business work tool.
Lebbeus Harding Rogers was born in Cincinnati on July 26, 1847. His father, New York-born Hiriam Rogers, died on February 21, 1848, aged 40, when Lebbeus was less than seven months old. The family went to live with Cordelia's wealthy, younger spinster sister, Sebbins Harding.
Lebbeus was soon making good money from selling biscuits, reaching for the skies and, appropriately, he could afford to celebrate his 21st birthday with a balloon ascent in Cincinnati. This effort was considered sufficiency newsworthy for Lebbeus to be invited into the offices of the New York Associated Press to be interviewed about his aerial interests and achievements.
The New York Associated Press was a news cooperative formed in May 1846 by five daily newspapers in New York City to share the cost of transmitting news of the Mexican-American War by boat, horse express and telegraph. The venture was organised by Moses Yale Beach (1800–68), second publisher of the New York Sun and father of typewriter inventor and supporter Alfred Ely Beach (1826-1896), editor from June 1846 of Scientific American.
Beach senior's AP venture was backed by the Sun, Herald, Courier and Enquirer, Journal of Commerce and the Express. Three years later the Tribune joined in, as did The New York Times when it was founded in September 1851. From 1862 NYAP faced competition from the Western Associated Press, which criticised NYAP for monopolistic practises in gathering news and setting prices. A later investigation revealed that NYAP had entered into a secret agreement with United Press, a rival organisation, to share NYAP news and the profits of reselling it. The revelations led to the demise of NYAP and in December 1892 WAP was incorporated in Illinois as the Associated Press. 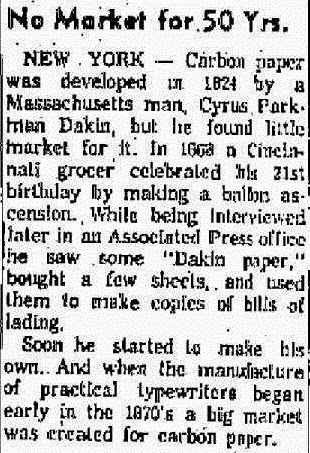 What Rogers saw in the NYAP offices in July 1868 was copies of news stories being copied for UP using an earlier version of carbon paper.
This had been devised in 1823 by Cyrus Parkman Dakin, born in Concord, Massachusetts, on November 11, 1800. By the year of his carbon paper invention, Dakin was based in New York City, where he first made copying paper coated with carbon pigment, employing a combination of ink, naptha, paraffin wax and carbon black. Dakin died in Jersey City in August 5, 1888, aged 87. 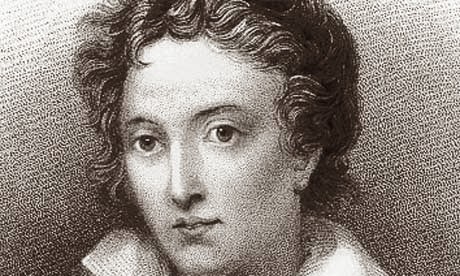 Poet Percy Bysshe Shelley, one of the earliest users of carbon paper

These 1810-11 letters from Percy Bysshe Shelley (1792-1822) and Thomas Jefferson Hogg (1792-1862) to Ralph Wedgwood, addressed from University College, Oxford, include at least one letter from Shelley using Wedgwood's invention, carbon paper. They elaborate the ideas behind The Necessity of Atheism. Shelley and Hogg appear to have begun a correspondence with Wedgwood out of "an irresistible impulse of curiosity" (Hogg's words) in response to his  "grand scheme" to form a universal language. Hogg refers to Wedgwood's imminent publication of a treatise on the subject, and to his invention, the "othiothograph", presumably the device for producing a "new character for language, numbers and music", patented in July 1810.
Carbon paper was first patented on October 7, 1806, by Ralph Wedgwood (1766–1837), a member of the Wedgwood family of potters. Ralph Wedgwood created a method using lard and lampblack and called "stylographic writer" or Noctograph (patent GB2972, "apparatus for producing duplicates of writings", and GB3110, 1808, "apparatus for producing several original writings ... at one and the same time"). 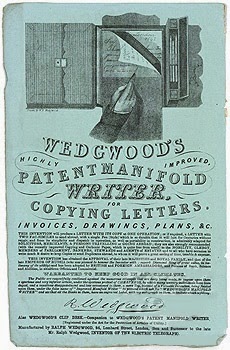 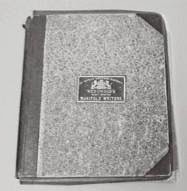 Born in Burslem, Staffordshire, Wedgwood was the eldest son of Thomas Wedgwood (1734-1788), the Master Potter of Burslem and Etruria, and cousin and business partner of Josiah Wedgwood, who funded his inventions. Percy Bysshe Shelley tested out the new process in one of his letters to Wedgwood, and asks Wedgwood to send him some more "semi-carbonic paper".
Pellegrino Turri invented a writing machine in Italy in 1808 which used "black paper". 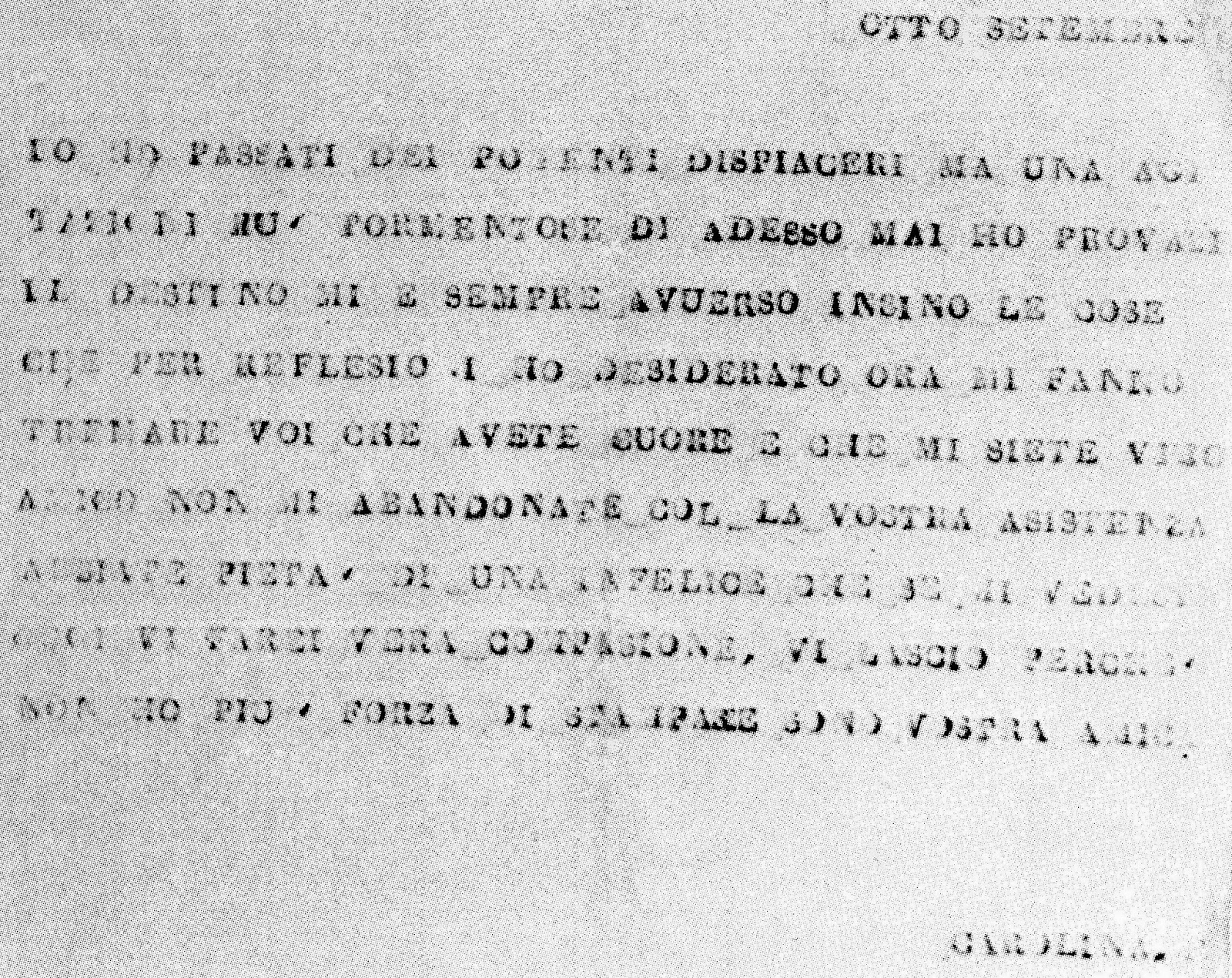 Letter written by Countess Carolina Fantoni on the Turri machine.
"I am desperate because I find myself almost without black paper."
Getting back to the Cincinnati genius Rogers, who achieved his first major sale when the United States War Department put in an order for $1500 worth of his carbon paper in 1870. He developed the first carbon-coating machine, and introduced the use of hot wax applied by rollers to replace the messy oil applied by brush.
He patented typewriter ribbons (1890-94), manifolding sheets (1889-90), letter-envelopes (1876-80), scalloped paper (1880), paper curtains (1882), an electrical conductor (1879), a tobogganing slide (1887), a pneumatic compressor (1904), a tandem brake cylinder (1905), rotary air or gas pump (1904-06), a tunneller (1911) and a method and apparatus for treating oil shale (1918). 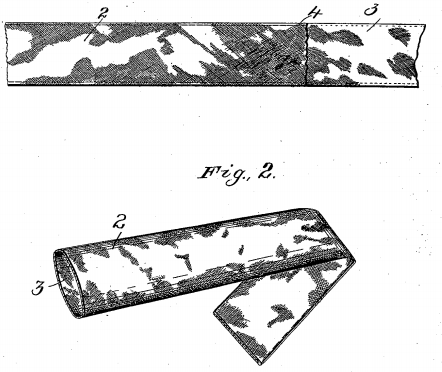 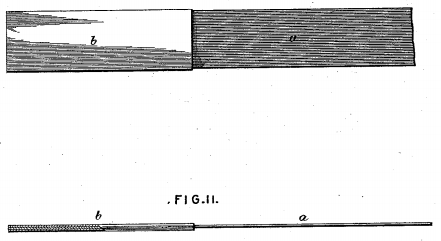 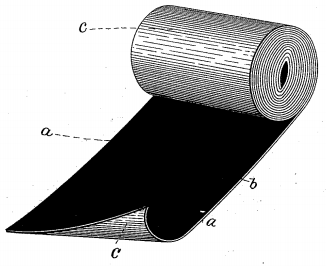 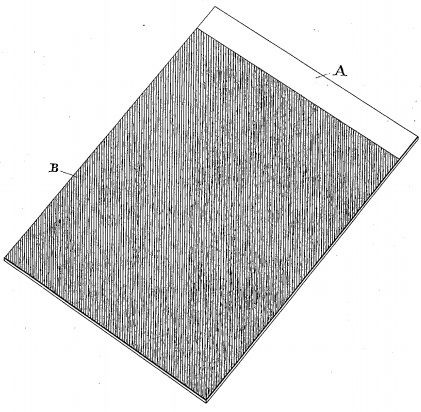 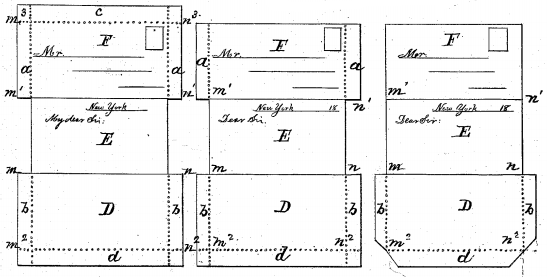 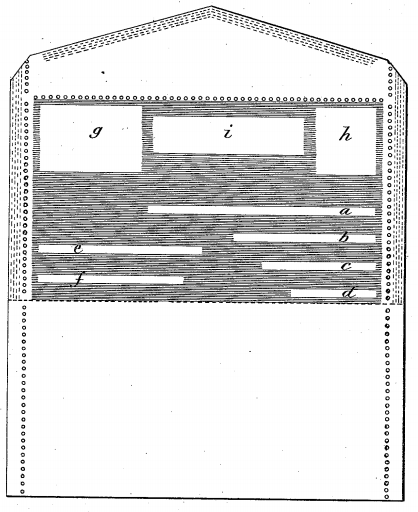 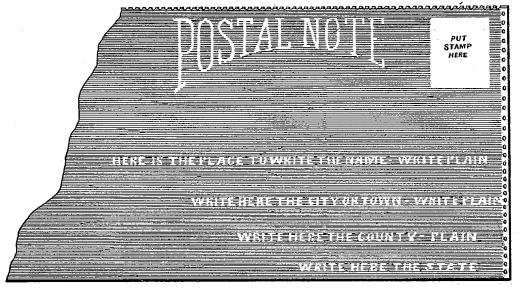 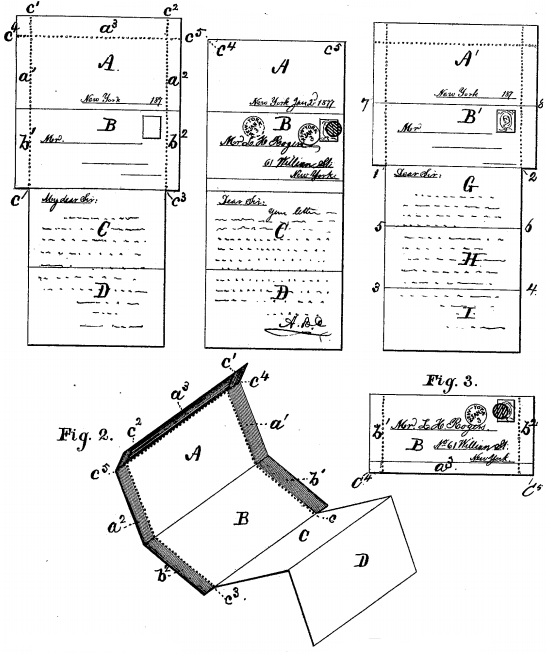 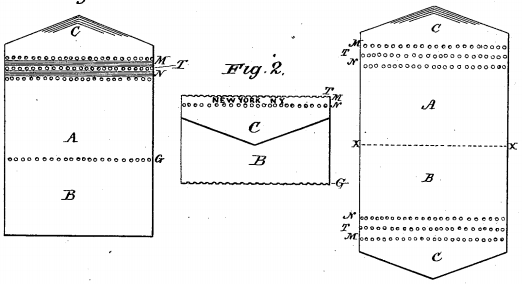 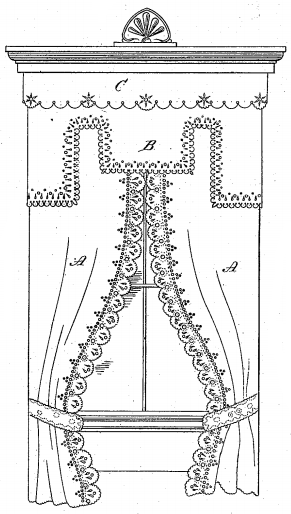 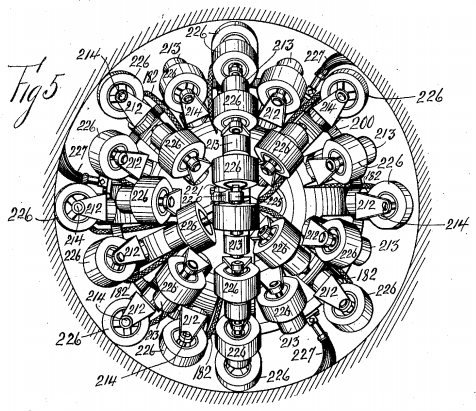 But he missed out on the "biggie", when, as a friend of Alexander Graham Bell, in 1876 Rogers was the first person invited to invest $10,000 in Bell's telephone. Other than carbon paper, his own "biggie" was inventing a system for laying underground wires for utilities in a flexible tubing. He also founded the Mount Morris Bank in Harlem, New York.
Through all this, Rogers remained a dreamer and sky watcher at heart. In 1900 he wrote a science fiction book called The Kite Trust (A Romance of Wealth), which followed juvenile kite-inventors and founders of the eponymous compact into adulthood, enormous wealth, the discovery of new power sources and the construction of trans-Atlantic tunnels, while all the while an interplanetary spirit instructs the cast on the history of the solar system. 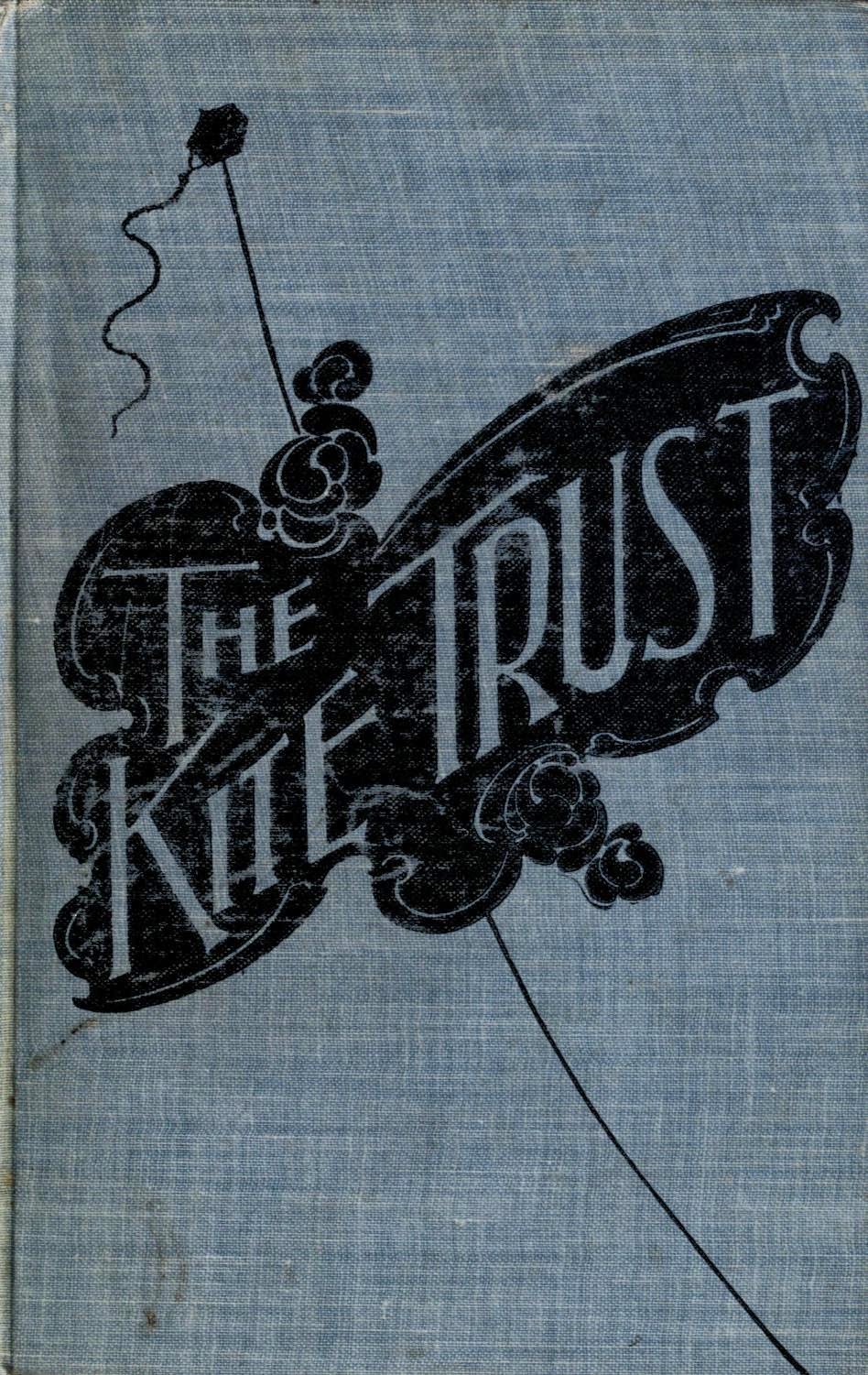 You dig up the most amazing things.

That illustration for the improvement in carbonized paper patent is hilarious. How simple can you get?