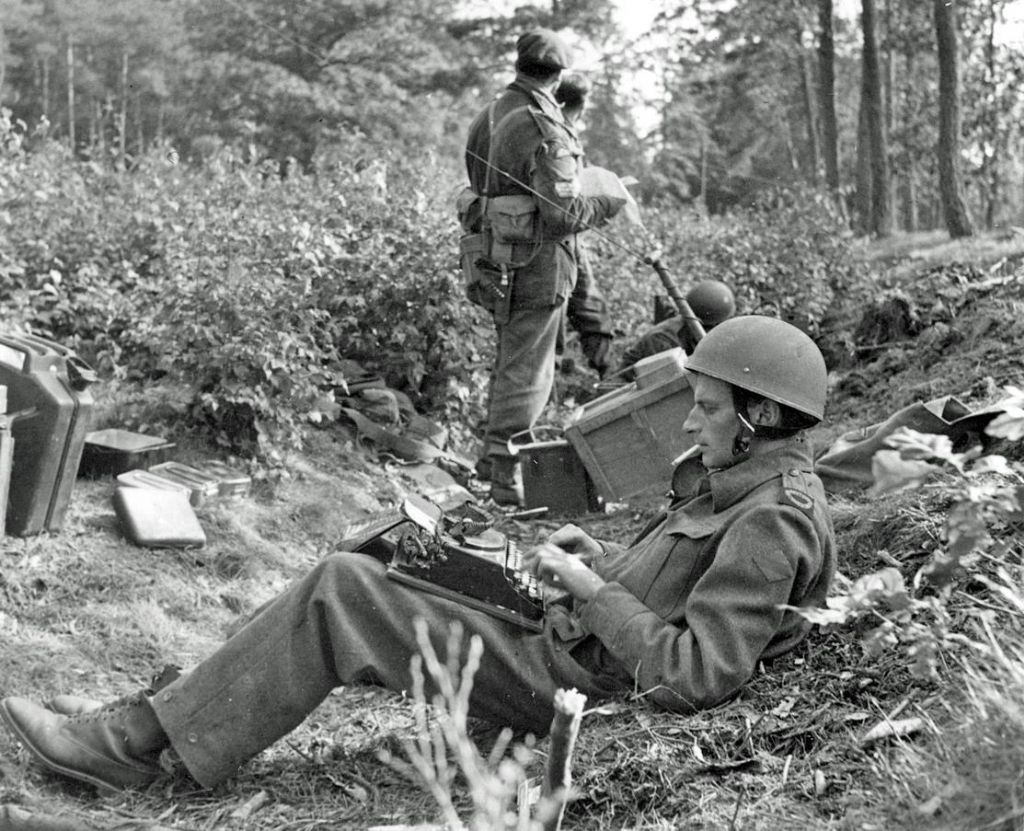 Australian-born British war correspondent Alan Wood was photographed by Dennis M. Smith, one of three official photographers with the British Army Film and Photographic Unit who, with Wood, were parachuted with the 1st British Airborne Division behind enemy lines, into Arnhem in Holland in September 1944. Sergeant Smith was wounded in the shoulder. He is seen below on the left with fellow cameramen Sergeant Gordon Walker and Sergeant C. Michael Lewis. 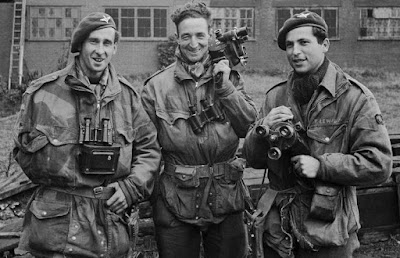 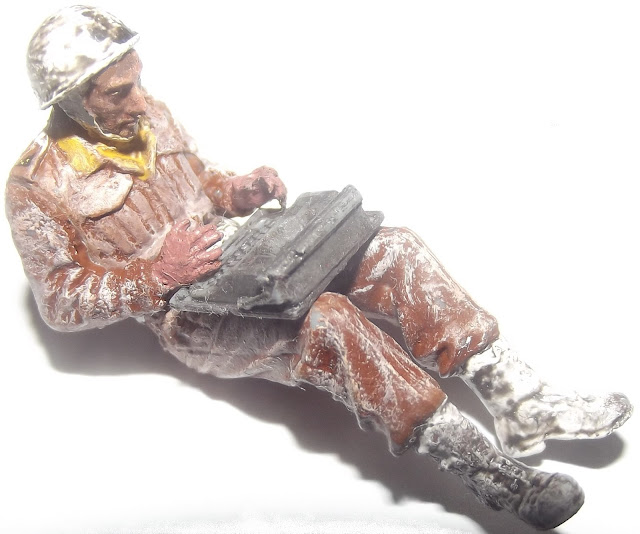 Alan Wood in 1:35 scale plastic, from Bronco Models made by the Ningbo Weijun Plastic Mould Co Ltd of China. I am indebted to my son Danny Messenger for painstakingly assembling and painting for me this one part of the "WWII British & Commonwealth War Correspondent Set", CB35140. 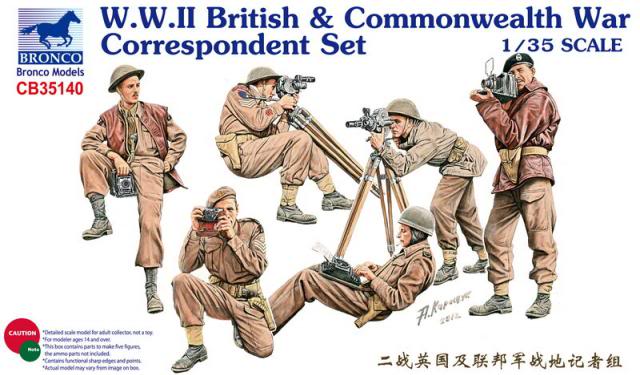 The image at the top of this post, of Australian-born London Daily Express war correspondent Alan Wood, using a Remington Model 2 portable typewriter to write his story in a ditch astride the Utrechtseweg after the British 1st Airborne Division's landing near Oosterbeek and Arnhem in Holland on September 18, 1944, is perhaps the most familiar of those taken of war correspondents with typewriters in World War II. It is, after all, the one used by Wikipedia to represent these brave but largely unsaluted journalists.

Wood was covering the Battle of Arnhem, part of Field Marshall Bernard Law Montgomery's ill-fated and hugely costly Operation Market Garden. This catastrophic British folly, up there with Winston Churchill's scheme to senselessly slaughter tens of thousands of soldiers in the Dardanelles in World War I, was an attempt to make a single thrust north over the branches of the Lower Rhine, to bypass the German Siegfried Line and attack the Ruhr. The 1st Airborne Division lost almost three-quarters of its strength and did not see combat again. The Allies suffered 17,200 casualties in Operation Market Garden. In his tribute to Wood in the The Times of London on November 5, 1957, philosopher Bertrand Russell said Wood "Had the distinction of being the only newspaperman to send dispatches from Arnhem ..." Here is what Alan Wood typed on his Remington in those trying conditions of September 18: 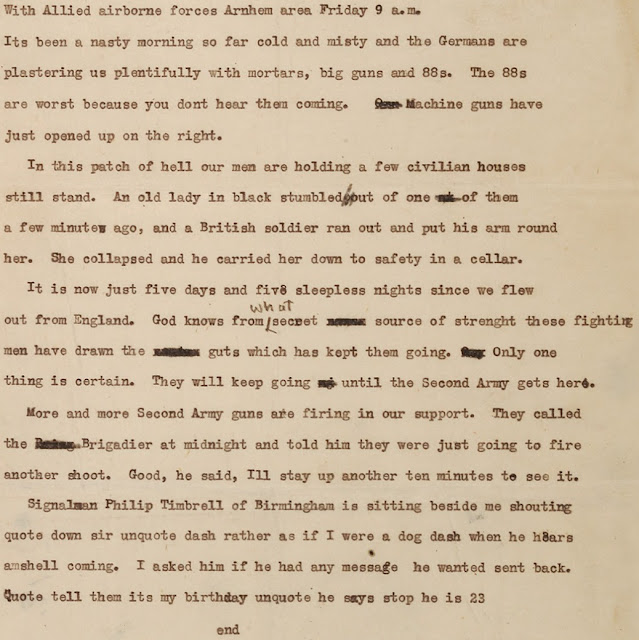 And this is how it appeared in Australian newspapers five days later: 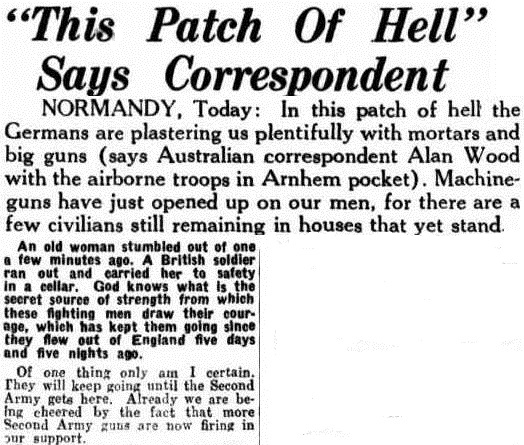 Captain Geoffrey Forde of the No 2 Forward Observation Unit with the Royal Artillery volunteered to serve in the Airborne Forces in 1944. After the war he wrote about his part in the Rhine crossing operation: "One rather interesting thing happened to me ... A tall, fair, rather quiet looking war reporter had asked me if I would bring in his typewriter in my jeep and deposit it at brigade headquarters as he had no room for it. He was going in by parachute. I accepted the typewriter, and after taking off I fixed it firmly in the jeep against the shock of landing. Well over two years later I saw a film Theirs is the Glory of the 1st Airborne Division at Arnhem, and there was my quiet-looking war reporter telling all England that when they met an airborne type to 'bring him a drink'. He was there at Arnhem and I hope sometime I shall have the chance to buy him a drink. They were very brave men at Arnhem and he was with them. His name was Alan Wood."
Alan Wood lost a leg from wounds suffered in Operation Varsity on March 24, 1945. This was a successful airborne forces operation launched by Allied troops which involved more than 16,000 paratroopers and several thousand aircraft - the largest airborne operation in history to be conducted on a single day and in one location. Wood's wounding was widely reported in newspapers of the day. In 1949 London Daily Telegraph correspondent Leonard Marsland Gander (1902-86) wrote his autobiography, After These Many Quests, and in chapter 16, "Airborne Ballast", named all six war correspondents who were involved on the British side in Operation Varsity. Of these three went in by glider: Gander, Canadian Stanley Maxted and Geoffrey Bocca. The other three, who elected to parachute, included Seaghan Maynes, Wood and American Bob Vermillion. Gander wrote, "All my colleagues turned up one by one, except Bocca and Wood. Bocca had been captured, but was released after a few days none the worse. Unluckily Wood, the bravest war reporter I ever met, was wounded in the leg and lost the limb." After the war Wood was seen in the movie, Theirs is the Glory, in two scenes sitting in a foxhole. The filming for the movie began in early August 1945 and continued for two months. It was finally released in October 1946. 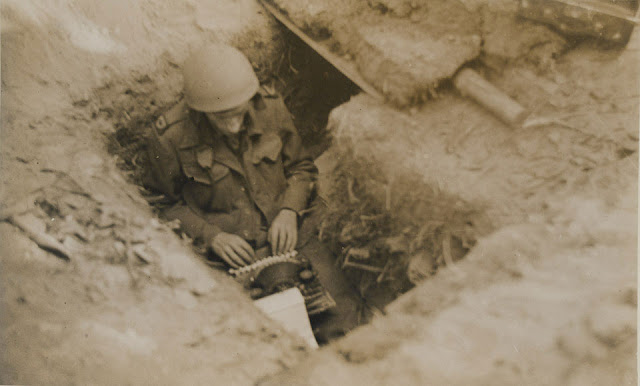 Alan Wood typing in a dugout
Alliott Alan Whitfeld Wood was born in Sydney on October 6, 1914. He was the son of George Arnold Wood (1865-1928), a brilliant English-born Australian history professor, and a nephew of Hubert Edwin Whitfeld (1875-1939), Vice-Chancellor of the University of Western Australia (his mother's brother). George Wood is best remembered for having the extreme courage to be an ardent opponent of British tactics in the Boer War, publicly protesting against "a policy that is bringing everlasting infamy upon the English name."

George Arnold Wood
Alan Wood was named after his grandfather's first wife, Martha ("Pattie") Pickering, née Alliott. He had just turned 14 by a week when his father committed suicide by hanging himself at the Pines Private Hospital in Randwick, Sydney, on October 14, 1928. A coroner found George Wood was of unsound mind following a nervous breakdown. The previous year recurrent eye-trouble had added to the burden of marking essays, examination papers and theses. George Wood ended the first term of 1928 suffering from shingles in its severest form. After months of mind-breaking torment, he ended it all, leaving a widow, three sons and a daughter (the first-born son had died aged six, in 1907; one of the surviving sons would also become a professor.). In 1975 the Sydney University Press published a book by R.M. Crawford titled 'A Bit of a Rebel': The Life and Work of George Arnold Wood. 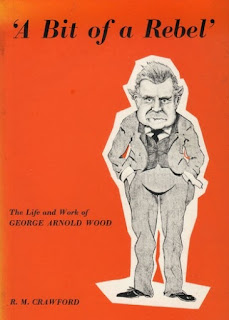 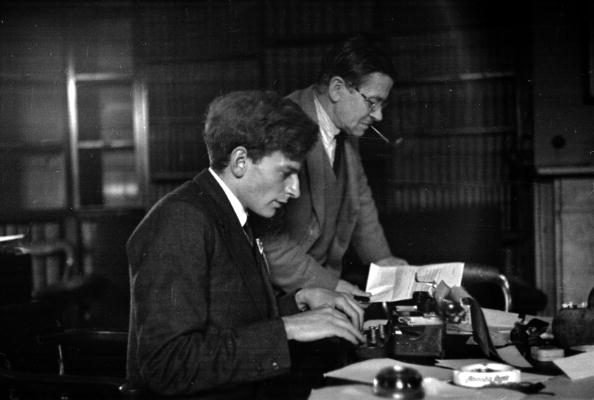 Alan Wood as president of the Oxford Union in November 1938, types on a Corona 3 portable typewriter. Beside him is Alexander Dunlop Lindsay, 1st Baron Lindsay of Birker (1879-1952), known as Sandie Lindsay, a British academic and peer. He was master of Wood's college, Balliol, and Vice-Chancellor of Oxford from 1935-38. At the time this photo was taken Lindsay was standing for Parliament in the Oxford by-election as an Independent Progressive on the single issue of opposition to the Munich Agreement, with support from the Labour and Liberal parties as well as from many Conservatives, including the future Prime Ministers Winston Churchill, Harold Macmillan and Edward Heath, but lost to the official Conservative candidate, Quintin Hogg. 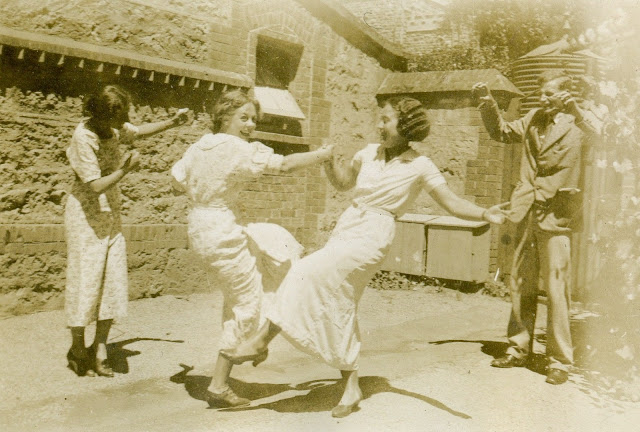 Alan Wood, far right, has a jolly good time with fellow (female) members of the Australian Christian Student Movement at the ACSM's conference at St Peter's College in Adelaide in 1935, just before he left for England.
Until Alan Wood left Australia for Britain in late August 1935, as a member of the Australian Christian Student Movement, he was known as Alliott Wood. He had graduated in arts from Sydney University and at Oxford University he studied Modern Greats and became president of the Oxford Union in 1938, succeeding the writer and Communist Philip Toynbee (1916-1981) (Wood was succeeded in 1939 by future British Prime Minister Edward Heath). Before becoming a war correspondent in World War II, Alan Wood had been a gunner in the British Army.
After the war Wood became head of the Overseas Food Corporation's Information Division, but left after exposing lies about the Tanganyika groundnut scheme (about which he wrote a book, The Groundnut Affair, in 1950). At Holborn in September 1946, Alan Wood married fellow journalist Winifred Mary Seaton (aka Coupland-Brown and Seaton-Jones), with whom he wrote books, including Islands in Danger (1955), a history of the German Occupation of the Channel Islands. On his own Wood wrote biographies of philosopher Bertrand Russell, with whom h
e forged a very close relationship, filmmaker J. Arthur Rank and newspaper owner Lord Beaverbrook: Bertrand Russell: The Passionate Skeptic (1957), Mr Rank (1952) and The True History of Lord Beaverbrook, as well as Flying Visits, a 1956 work critical of Australia. Alan Wood died of an incurable brain disorder at the Atkinson Morley Hospital in London on October 27, 1957, aged just 43. It has been claimed he suicided in hospital, as his father had done before him. A mentally distressed Mary Wood suicided from a drug overdose barely two months later, leaving two orphaned sons. 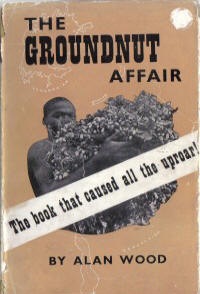 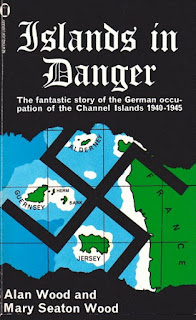 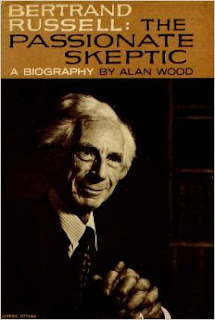 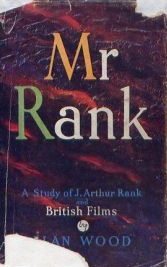 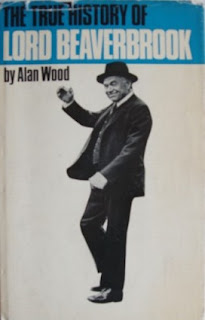 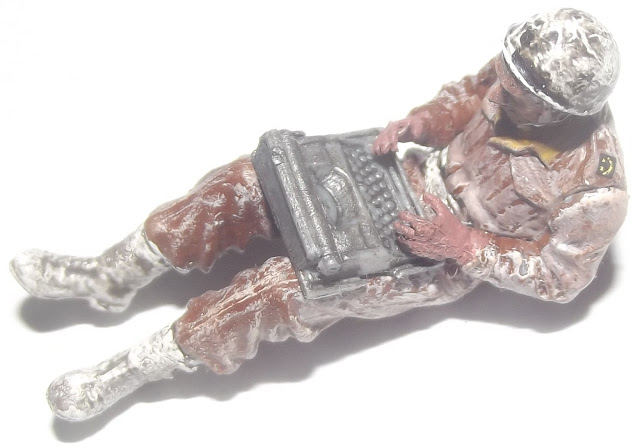 Posted by Robert Messenger at 00:36

Interesting fellow. I've always admired the correspondents and photographer from WWI and especially WWII. Even though news people have been in every war there is just something special about what they went through in the horrors of WWII.

Fantastic write-up on Alan Wood - I always thought the typewriter was a baby Hermes (I know Jack Smyth of Reuters went into Arnhem with one as he says so in his book Five Days in Hell and it looks superficially to me), so thank you for that. Will still take my Hermes with me to Arnhem this year to continue to try to bring further understanding and appreciation amongst WW2 re-enactors and public to the role played by such correspondents - armed with nothing but their wits and writing implements, they recorded the foundation of the modern world. At least we're starting to get away from the 'didn't they write it all back at HQ, then ?' mentality :)

Nice you included Marsland Gander's book - so few people know of that and the 'prequel' Long Road to Leros - which was published under wartime security conditions and was pretty much expanded for the post war copy. Wood's (and fellow Aussies Alan Moorehead and Chester Wilmot's) WW2 writings are extremely powerful and still eminently readable today - if you can find a copy I recommend The Falaise Road by Alan wood - a harrowing account of the end of the German 6th Army in Normandy.

Thank you for teaching me something today that I didn't know. Immensely grateful.

Just read your piece on Charlie Foxtrot vintage - thanks for the mention in the article. However, I'm based in the UK not the US ;) Arnhem went really well - if ridiculously wet (for the first time in years)took along a Baby Hermes - the same type of typewriter as carried by Jack Smyth of Reuters. Amazing how many people noticed that I wasn't carrying a weapon but a box of pigeons and a typewriter and came over to chat.

The young woman in the centre of the SCM photo is my mother then Joyce Melville who was a friend of Al's. I remember meeting 'the man with the tin leg' where my parents were living in Roseville NSW in the 1940s. I now realise that some of the typewritten documents and letters from him in my possession were probably written on the same typewriter Philippa Scarlett