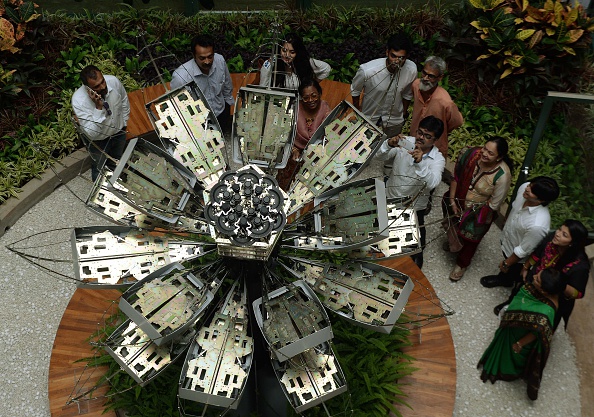 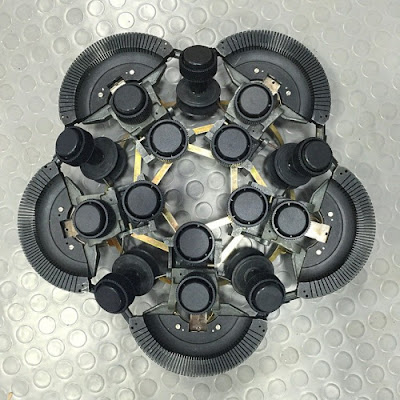 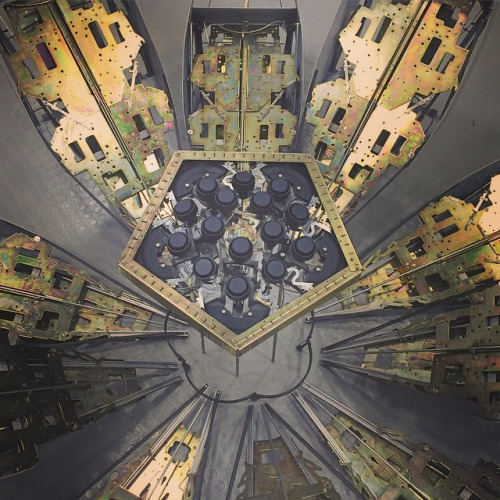 Typewriter enthusiasts may recall that a few years ago the liquidators for the old Godrej & Boyce typewriter factory in Mumbai, India, were left stuck with hundreds of Prima models with Arabic and Devanagari language keyboards that they couldn't shift, for love nor money. In what seemed like a stroke of genius, they convinced a highly gullible British journalist to float a furphy that these were the last typewriters ever made, by anyone, anywhere in the world. At first the yarn was, with all good reason, a complete dud. But then Godrej gave it a gee-up and the story went viral. The typewriters still stayed put. The liquidators, however, weren't finished with them. 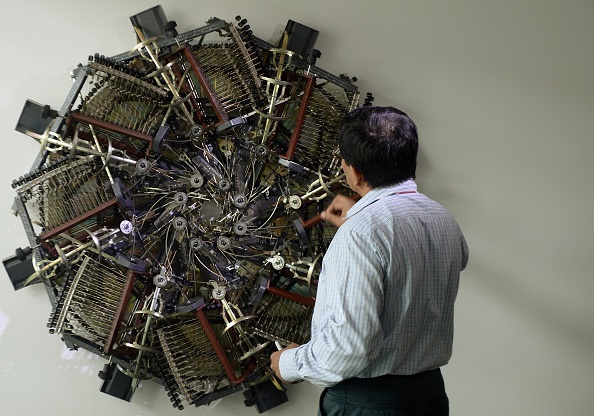 Yesterday in Mumbai, Oakland, California-based artist Jeremy Enoch Mayer opened a new exhibition. Yes, you guessed it, the typewriters he dismantled are from "Godrej and Boyce’s last batch of manual typewriters". It is, organisers say, "an attempt to immortalise" these machines through an art project. The keyboards are turned inwards to disguise the Arabic and Devanagari characters on them. Mayer posted this image of a Devanagari keyboard himself: 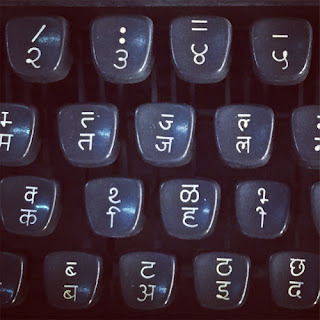 But there's been a slight change of tack. The new twist is that Godrej & Boyce is now telling equally gullible journalists only 100 of these manual typewrites were made. In April 2011, when Britain's Daily Mail fell for this nonsense, it quoted Godrej's general manager Milind Dukle as telling India's Business Standard newspaper: "Till 2009, we used to produce 10,000 to 12,000 machines a year." The Daily Mail said Godrej "is now down to its last 200 machines - the majority of which are Arabic language models."
Yet Gitanjali Das of the Mumbai Mirror and NYOOOZ  remained convinced this week that the ones used by Mayer were the last manual typewriters made anywhere. "Godrej & Boyce was the last company that made manual typewriters - firms world over have moved to manufacturing only electronic ones - before it shut production in 2011," Das wrote. He quoted Godrej chief archivist Vrunda Pathare as saying, "History should not just be treated as a thing of the past, but also as a path to the future. We wanted to have a tangible memory of the product."
In a statement which makes no sense at all, Pathare added, "In 1955, we took a technological leap by flagging off the production of typewriters. We wanted to continue that tradition." [And yet the typewriter workers, according to Mayer, still live nearby. What the ... ?]
Das quoted Mayer as saying: "I was born in a time when the world was making its transition from analogue to digital. The computer had rendered the typewriter dead. But people are nostalgic about typewriters. Thousands of typewriters are dumped in landfills world over every day. But this [the use for art] is them being reborn." 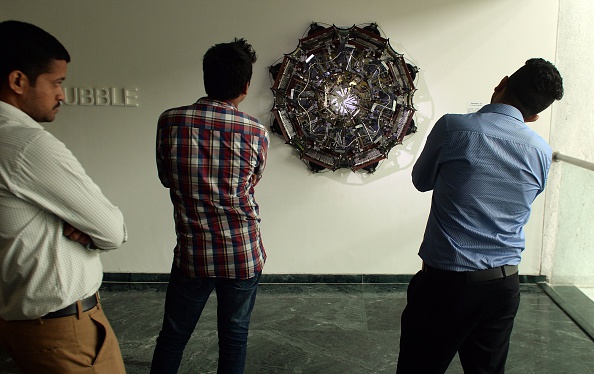 A mandala
Mayer started working on the centrepiece installation in March this year with the help of students from Mumbai's Sir JJ School of Arts and the Raffles Design Institute. "The project endeavours to encourage artists across the globe to restore, recreate and re imagine the past in order to create art that will inspire the current and future generation to build a better future." A better future with dismantled typewriters? Someone must be joking!
The 13-foot high sculpture seen at the top of the post took five months to build and with the other works is on display at the Hubble, a Godrej & Boyce Plant 13 complex in Vikhroli East, Mumbai. See here.
Mayer, 43, is well-known for these anthropomorphic works, among many others: 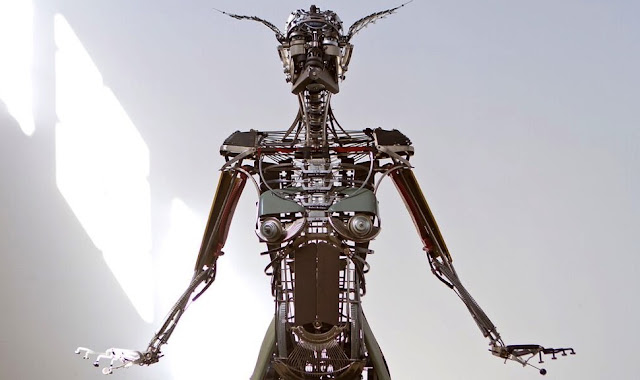 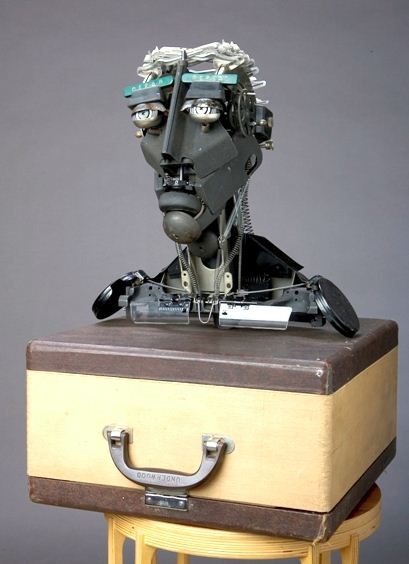 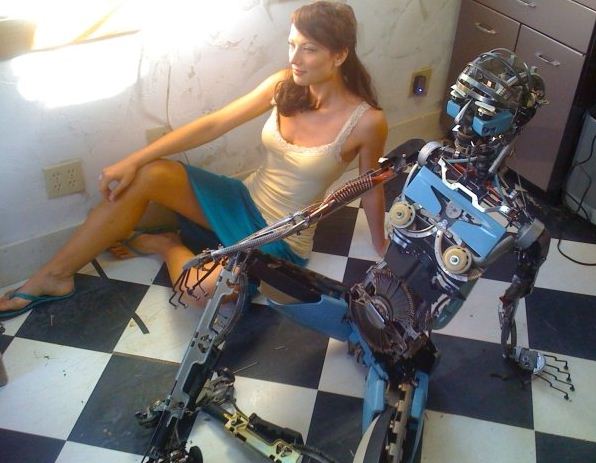 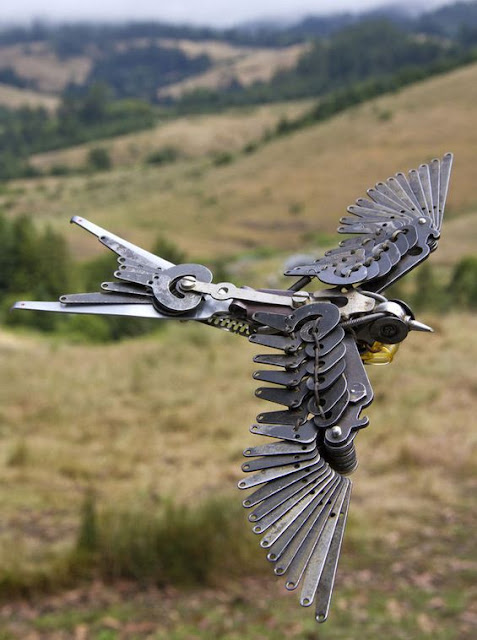 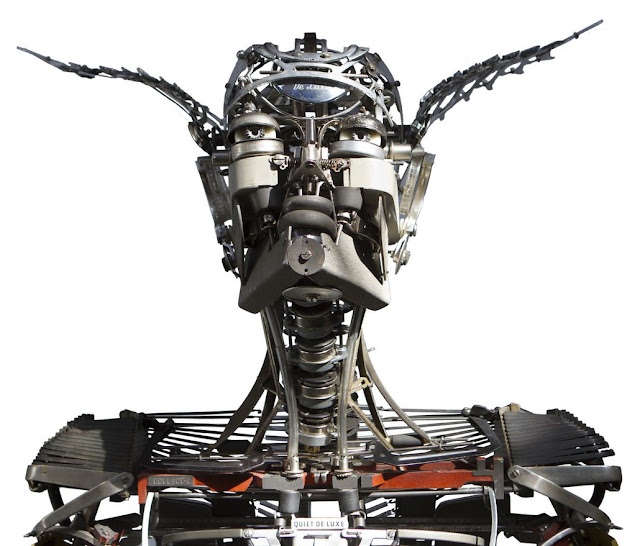 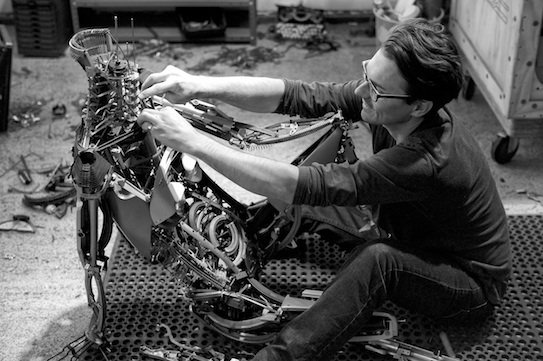 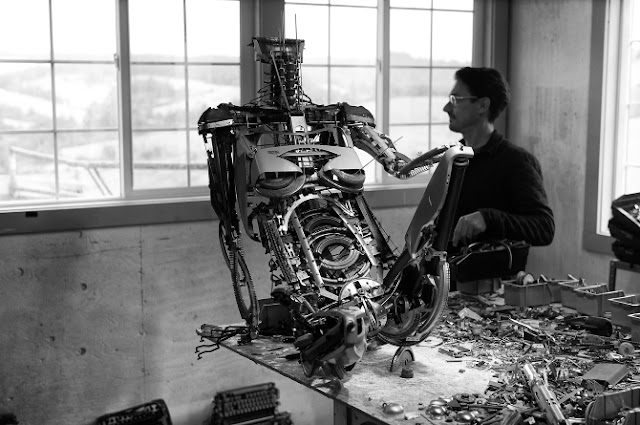 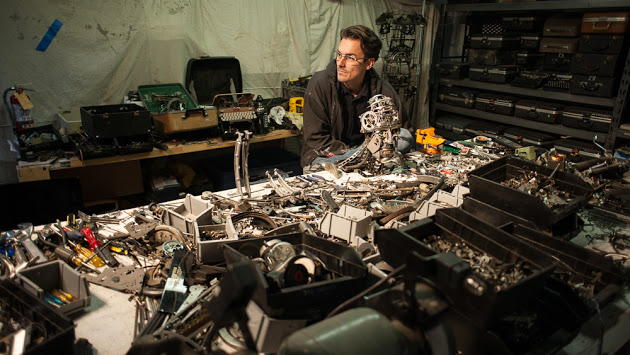 Posted by Robert Messenger at 09:16

Perhaps someday someone will be disassembling his sculptures to obtain parts to repair typewriters. :D

Sounds like a very reasonable thought, Ted. I have updated this post with a few comments about the typewriters (only a 100 ever made, they now claim!), none of which make much sense

Until the factory closed I never knew of the company and their typewriters. I'd never be interested in one unless it were an English key board though. I do not really like typewriter destruction for 'art' though.

As I understand it, Mayer works only with typewriters that are "beyond repair." Of course, we know that that is a relative concept. But he has a friendly, symbiotic relationship with the folks at Berkeley Typewriter.

Part of his project is also to create 3D digital models of the parts of these machines. In that way, their souls may be preserved for some future reassembly. At least, it's nice to think so.

Gotta give him props for creativity. Better to take junked machines and work them into a beautiful display than to dump them in the ground.