On a sunny Sunday afternoon in Georgia, July 31, 1932, John Swainson Harrison upped and jumped into the Savannah River. Once a jolly typewriter inventor, as Banjo Patterson might have said. The former New York City journalist's body was found two days later. The New York Times reported that the 71-year-old New Brunswick-born Savannah lawyer had committed suicide "in despondency over the failure of the invention of an electric typewriter". The Times added it was Harrison's second attempt to end his own life. In 1928 he had tried to shoot himself. 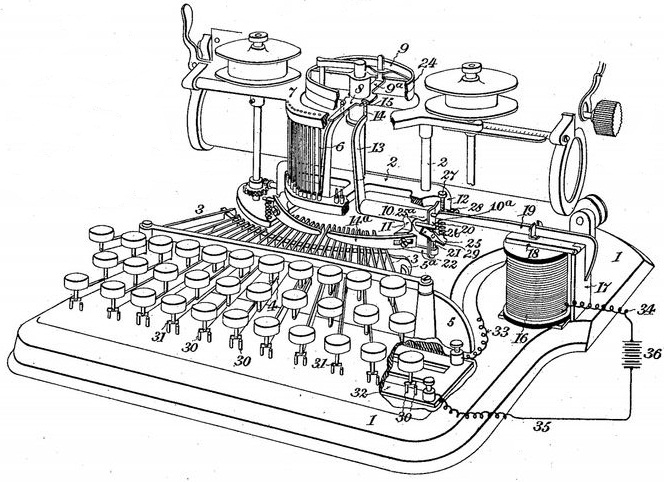 Now this is not a good thing to do, even at the very worst of times. But over an electric typewriter? What the Times didn't mention was that Harrison's electric typewriter invention had been a flop 30 years earlier. And that's an awful long time to remain despondent. Especially since, having escaped his Irish Wesleyan Methodist parents and siblings in his home hamlet of Sheffield in far eastern Canada, at the advanced age of 30, Harrison had worked as a reporter in New York City in 1892. With his newfound freedom, he then reached as far south as Savannah, Georgia, worked as a stenographer for a legal firm and studied law on the side to be admitted to the bar. Along the way, in Lexington, Massachusetts, in 1897, he had married his Saint John, New Brunswick lady friend, Louise Merritt. Sadly, after Harrison's first suicide attempt, Louise hightailed it back to Canada with their son.
But Harrison had not given up on his typewriter lightly. As he did in trying to end it all, in April 1902 he made two attempts to prefect the machine, the first alone and the second jointly with Austrian-born West Virginia mechanical engineer Hermann Hill (1874-1951). Both patents were assigned to the Prendergast Electric Typewriter Company, a corporation of Maine with $200,000 in capital. Hill soon got over the setback of the typewriter never being made, by Prendergast or anyone else. He went on to fixing washing machines in Syracuse. 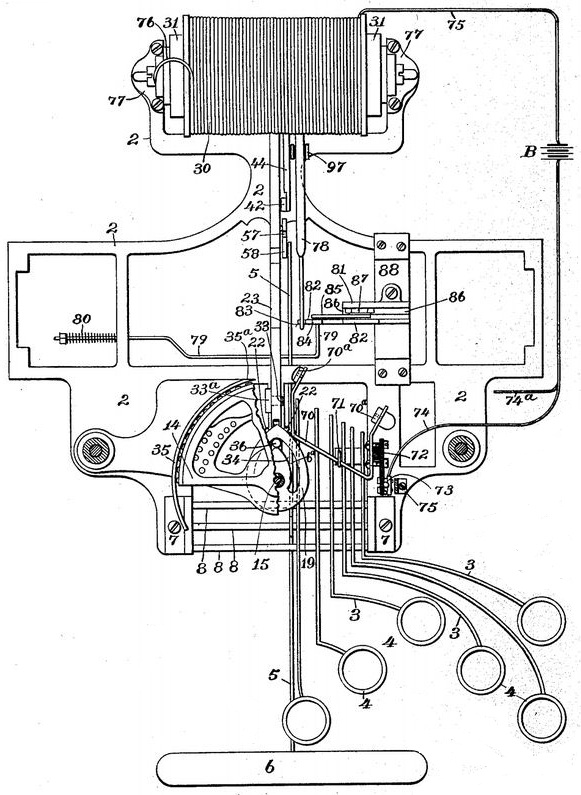 Ironically, 21 years after Harrison's death, Ralph Coxhead referenced his invention for a rear-strike mechanism for the Varityper, as SCM did for one of its electric portables in 1967.
It is possible that, four months before his second, successful suicide attempt, Harrison had been startled to read this little item in The New York Times? If he did, it would doubtless have brought on a fresh bout of despondency about his own electric typewriter venture: 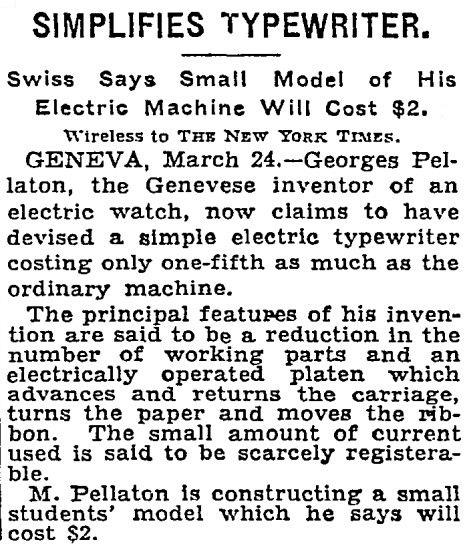 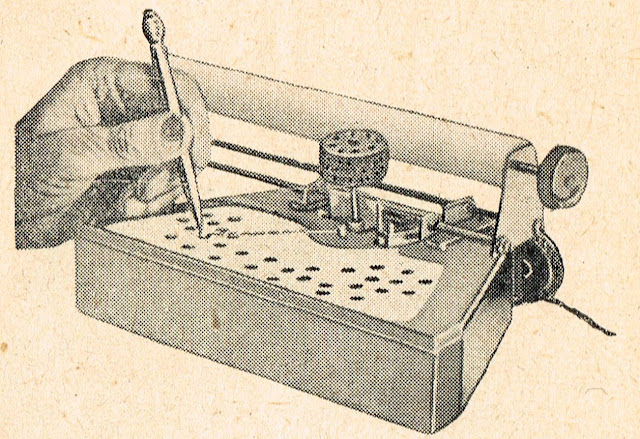 Georges Emile Pellaton-Steudler (1865-1960) was a Geneva watchmaker who established the Martel company in 1911. 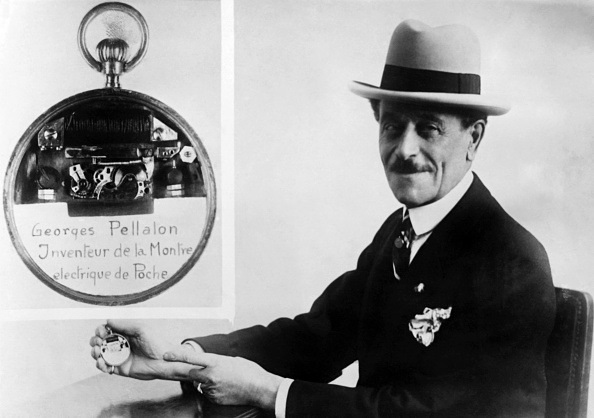 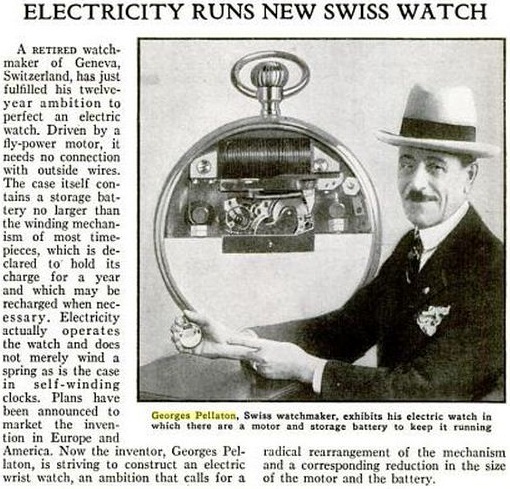 Popular Science, June 1932
A $2 electric typewriter! As I said, they should never be taken too seriously.  But just a year after Pellaton's typewriter emerged and John S. Harrison departed, IBM was showing off some very serious hardware at the National Business Show at the Grand Central Palace in New York City: 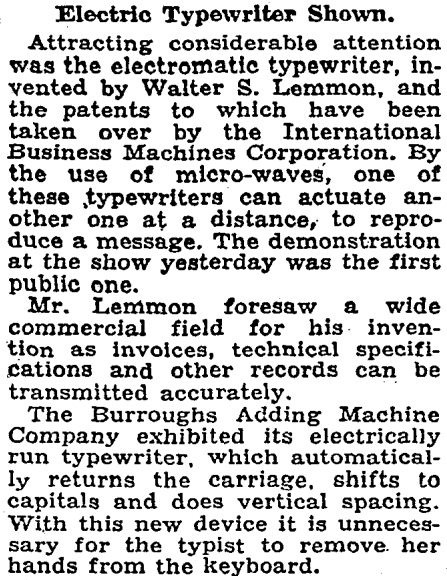 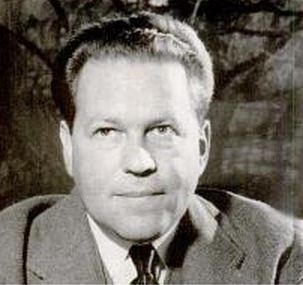 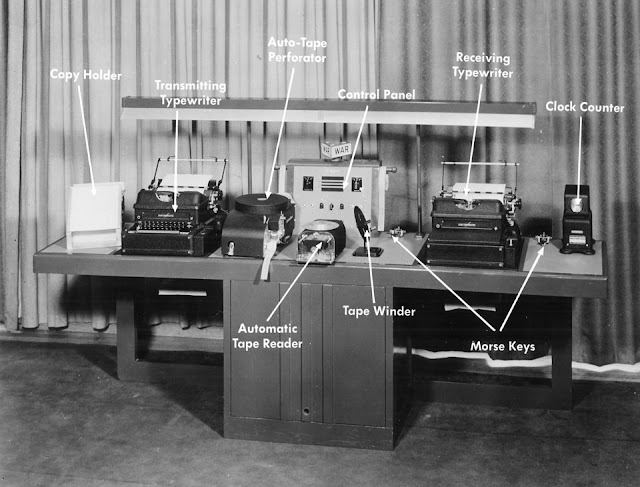 The IBM Radiotype consisted of an IBM electric typewriter equipped with an attached compact transmitter that was synchronised with a similar installation hundreds or thousands of miles away. When the transmitting machine was operated, impulses were sent to the receiving installation, either by radio or wire, so that all of the sender's keystrokes - including backspacing, tabulating and shifting - were reproduced on the remote machine. 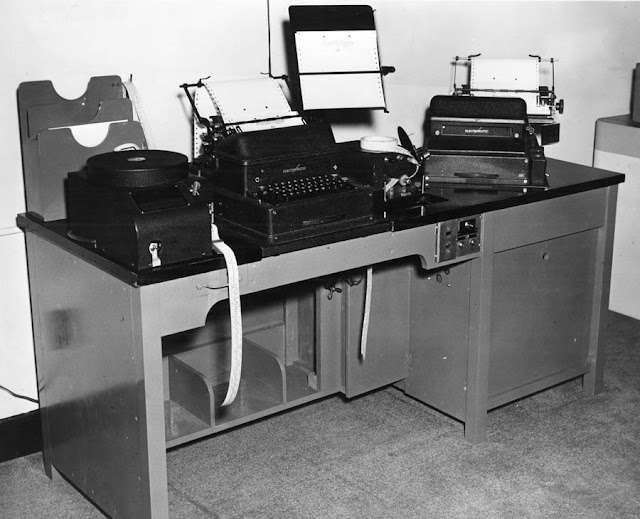 By using the Radiotype, everything that one pair of hands could do on a standard typewriter keyboard in one location could be reproduced simultaneously in any number of other locations by means of microwaves or wire transmission lines. In this way, reports, requisitions, orders, messages and all types of business documents could be distributed instantly wherever the originator desired. 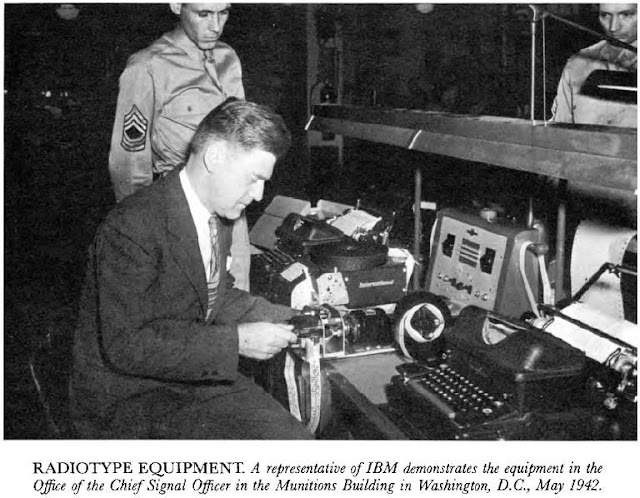 The first working model of the Radiotype was built in 1931 in the laboratory of Radio Industries Corporation under the direction of Walter Stedeker Lemmon (1896-1967), who was then the company's president, Clyde J. Fitch (1899-), an engineer, and A. M. Nicolson. Lemmon later demonstrated the working model to IBM's president Thomas J. Watson, and rights to the product were acquired by IBM in August 1933. Lemmon then became general manager of IBM's new Radiotype Division, and he was joined there by Fitch and Nicolson. 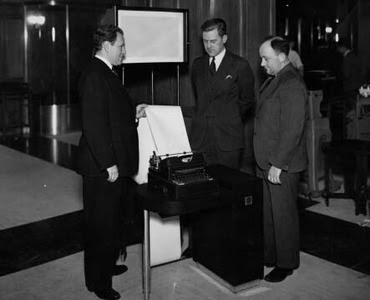 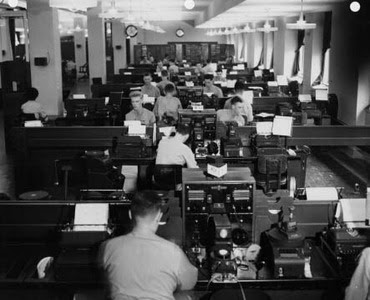 Other Radiotype installations in New York, Atlanta, Dayton, Omaha and Seattle were linked to the US Signal Corps communications headquarters and its central radio station WAR in the Pentagon. These various stations handled a wartime peak of 50 million words a day - the equivalent of 1315 novels (probably not War And Peace, though) - and could move a single short message around the world in under four minutes.
Posted by Robert Messenger at 00:10

Problem with anything electric...it requires an electrical power source.

The Radiotype sounds a lot like the Teletype system which had already been around for a while. I wonder what the difference is?
Great story, and info as usual, Robert.
Thanks

Poor guy was just too far ahead of his time, like Galileo knowing two objects would hit the ground at the same time in a vacuum but having no way to remove air.

I just got a rare electric myself, an R.C. Allen Visomatic Electrite.