Not So Still Life With Remington SR-101 Electric Golfball Typewriter 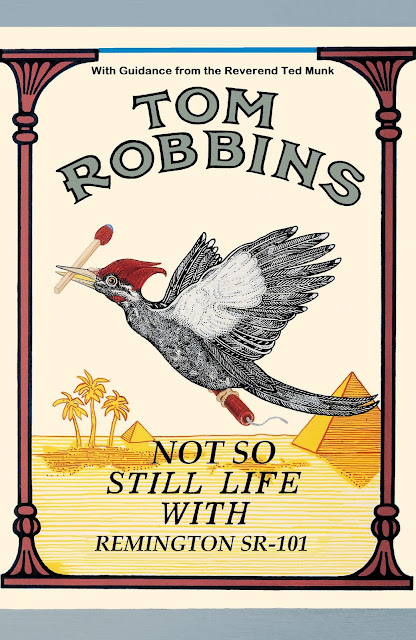 I am inspired by Ted Munk's To Type, Shoot Straight and Speak the Truth blog post on the typewriter Tom Robbins used to write Still Life With Woodpecker to finally 'fess up that I actually own (albeit temporarily) a Remington SR-101. Ted reasoned - convincingly, I believe - that the typewriter was not the (fictitious) Remington SL3 (SL = "Still Life", 3 = third Robbins book) that Robbins claimed he had used, but the much (justifiably) maligned Remington SR-101. Although he didn't name me as the author of it, Ted linked to my ozTypewriter blog post on the SR-101 ("The $340 million Typewriter"). 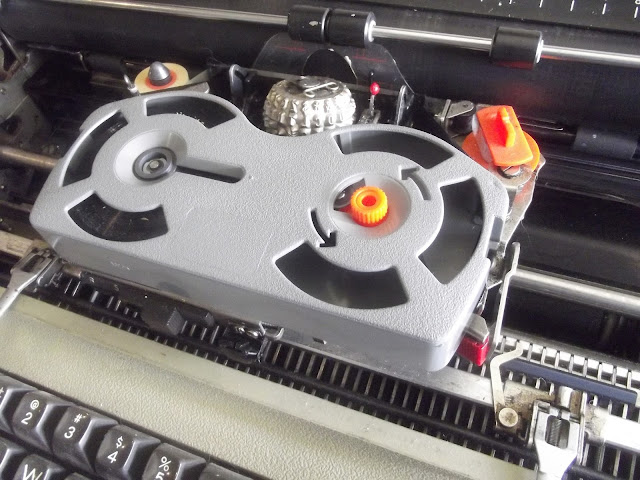 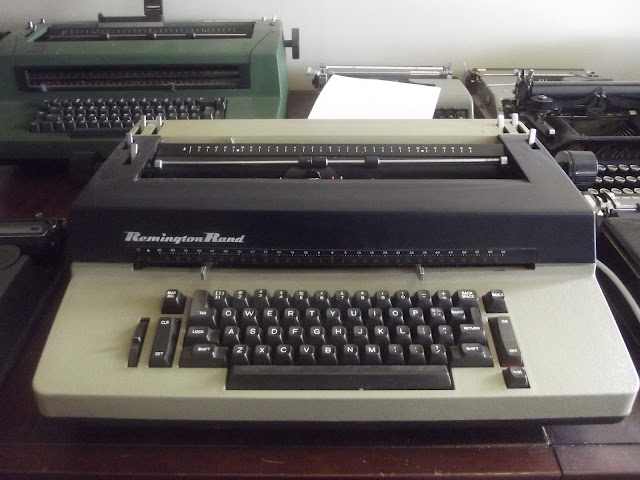 At the time I wrote that post, almost exactly a year ago,  I never would have believed for one second that I would shortly after be given one of these absolutely awful machines. A chap I met through the University of the Third Age sports history lectures offered to give me "two old typewriters". When he and his wife walked up my stairs carrying these gifts, I saw straight away that one of them was a magnificent burgundy "crocodile skin" Royal portable from the 1930s. It was in immaculate condition. I also identified the other immediately (having blogged on it a few weeks previously) - it was a dreaded SR-101. But what could I say? One takes the (very) good with the (very) bad. I was at least curious as to how it compared to an IBM Selectric. 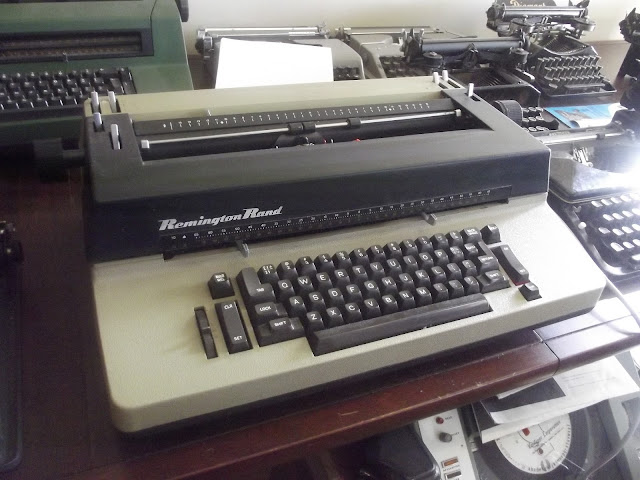 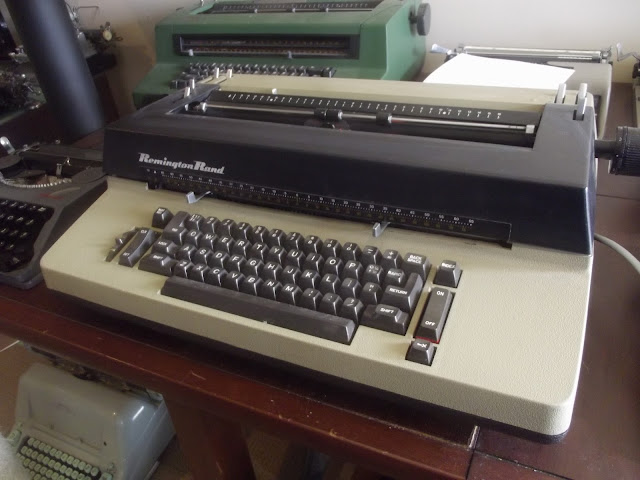 The SR-101 had no power cord with it, but I quickly found one and tested it out. Holy Cannoli!!! I almost jumped out of my skin - in fright. The thing went totally haywire. It had a life completely of its own, with the platen spinning around, churning through paper, and the print element racing backwards and forwards, all without any help from me. So I quickly switched it off, promising myself I'd "get back to it one day". That day came yesterday when the Reverend Ted blogged on the Robbins book. And I was sorry it did. The thing is behaving even more badly now than it did when I first tried it out. Now it doesn't even type properly (the first time I tried it I got one word typed every six lines or so).
Anyone want a Remington SR-101? Free. Works. It's just a little bit crazy, that's all. There's certainly no "still life" about it. 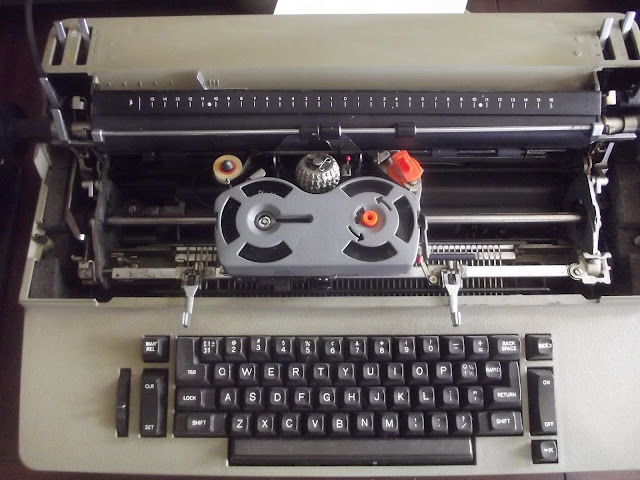 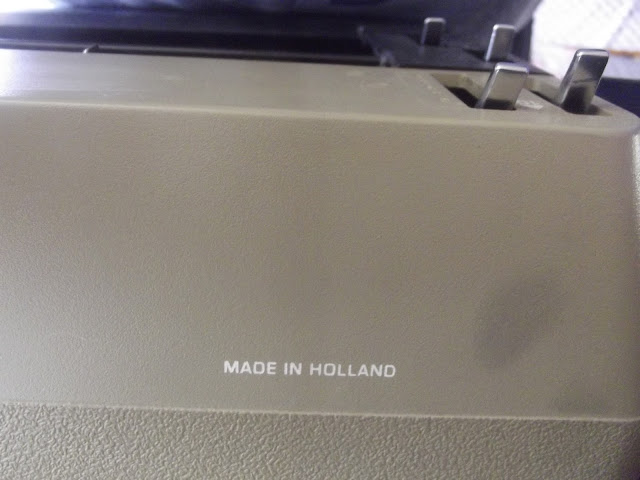 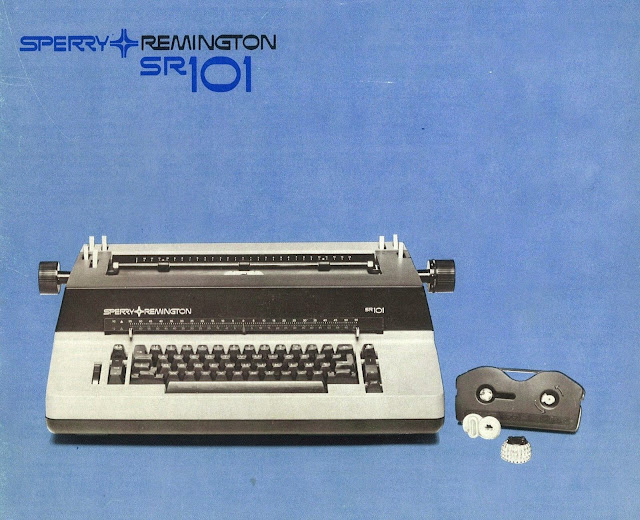 It is indeed a big machine! I've had similar problems with some Selectrics that stood unused for too long. SOMETIMES they only need some "taming" - let them run haywire until they "tire" (or, more prosaicly, until the old oil and grease warm up and free the linkages), then use them gently, pressing each key and oiling it until it works again. Then you can use the machines properly until you turn them off and they cool. Then it's all over again.

In your machine's case, it sounds like the carriage return key was stuck, hence it kept spinning the platen. A couple of taps on the key and a drop or two of oil in the linkage should free it.

My local IBM serviceman strongly warned me against the Remington and Olympia Selectric clones; apparently they do have some well deserved ill reputation. I wonder how bad they are.

heh, real bad, from what I've seen. The only one I've encountered shows up in Bill's Mesa Typewriter Exchange every so often when I visit, apparently owned by a local writer who loves it enough to bring it to Bill every time it breaks. Bill hates the thing, but has been slowly replacing the broken parts with IBM-sourced replacements, so eventually the fellow will have a good machine. He tells me that any of the selectric clones people bring him for free (hermes/oly/juki/remington, etc) immediately get parted out and scrapped. He never re-sells them for fear of having to maintain it later. :D

Still, maybe you can unload it easier by claiming the literary connection to Tom Robbins - or get him to sign it someday like that numbskull with "Paul Aster's SM7".