The Very Ordinary Brother EP-22 Electronic Typewriter: For the Benefit of Mr Munk 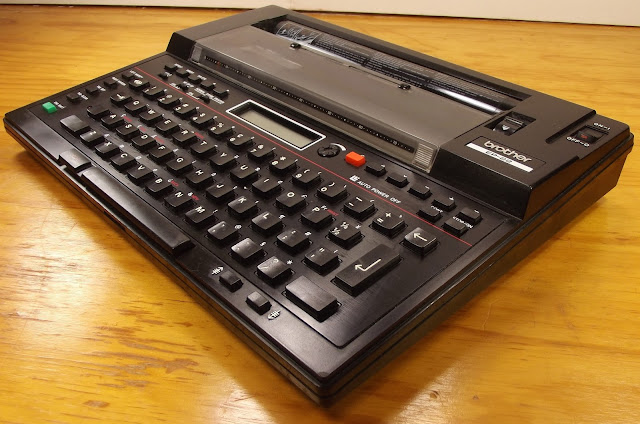 Ted Munk found my blog post of July 2013 called Flight of Wedges (Electronic Typewriters). Ted asked, "If you still have that Brother EP-22 baby wedge and haven't given it a try, maybe you could at some point do a review. I have an EP-20, and am curious about the differences (other than the different shell colour and supposedly a serial port for hooking up a computer). 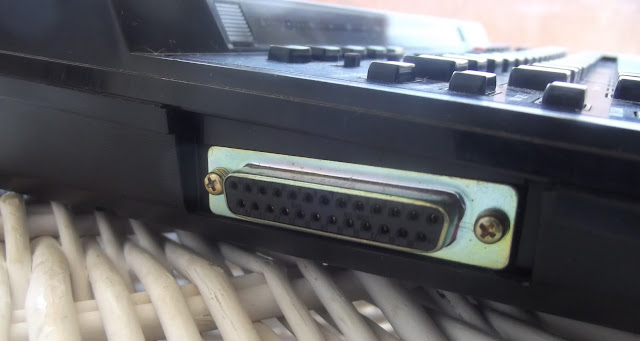 "Mostly I'm curious if the font improved from the very basic dot-matrix font of the EP-20,

and if it can do auto-return or has a multi line memory (the EP-20 doesn't do either)." I told Ted I'd try to track the EP-22 down amid the rubble downstairs in my garage and, if I did uncover it, test it. He answered, "Sweet! Be sure to include the serial number.

"I dug up a New York Times article that suggested the EP-22 was 'coming soon' in late 1983. There's so few of these in collections that every example helps to build a timeline. I continue to praise Brother for their sensible serial numbering system."
As much as I love trying to help out Ted, I must say this exercise was a bit anti-climatic. Maybe I should have also tried to find the instruction book, and read it first (if I have such a thing, which I doubt). I'm not sure my efforts will be of that much assistance to Ted. I suspect he will be able to make much more sense of the keyboard than I can. 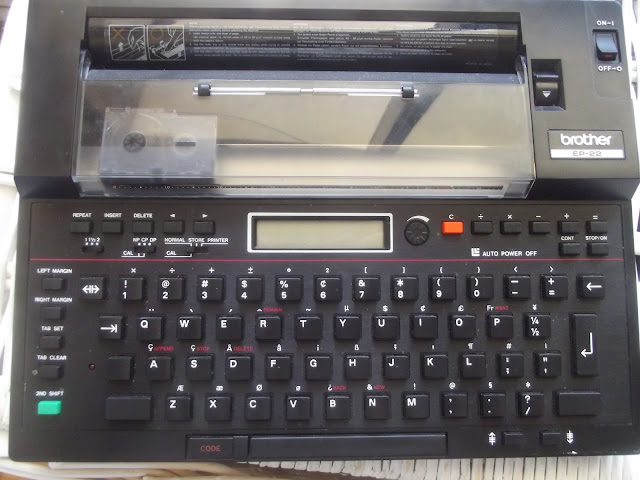 All I managed was to turn it on, wind some paper on (which twisted up the already faded ribbon), and type a few words. The result only served to confirm my very worst thoughts about these machines: 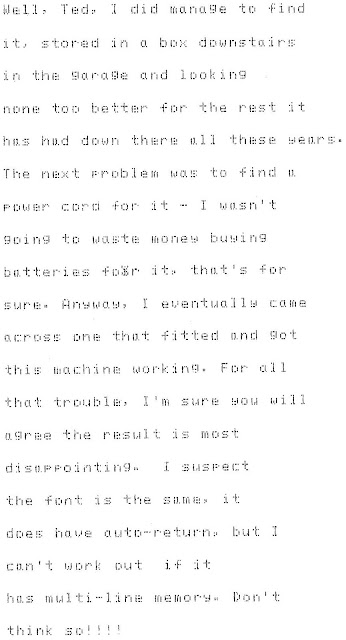 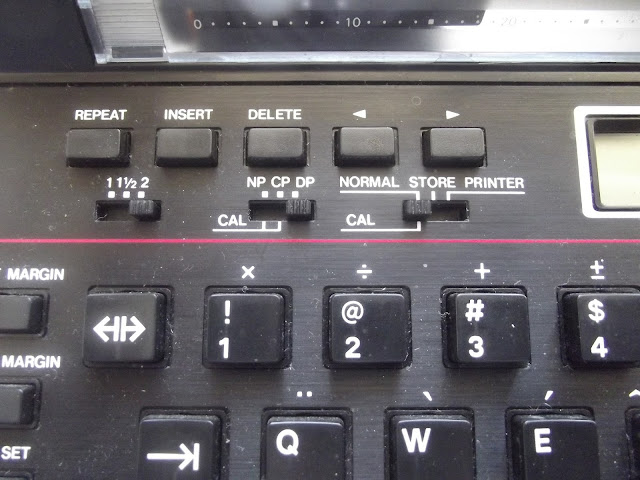 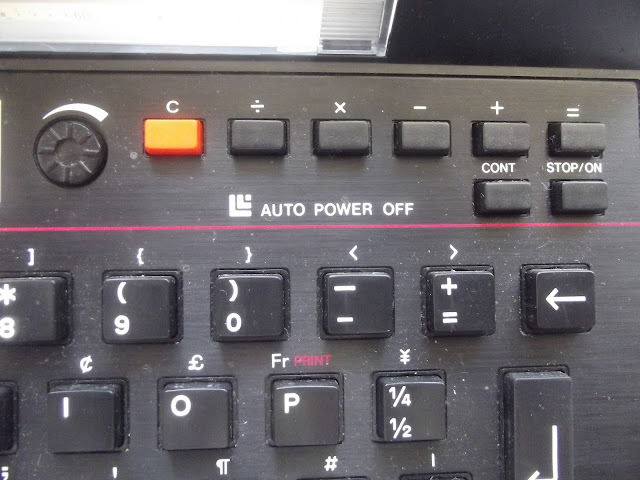 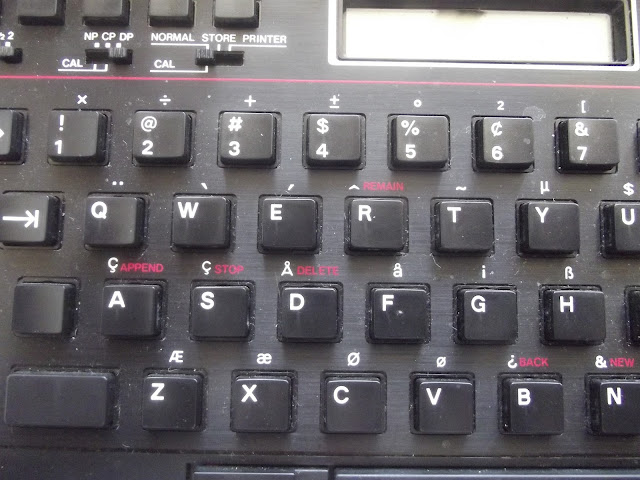 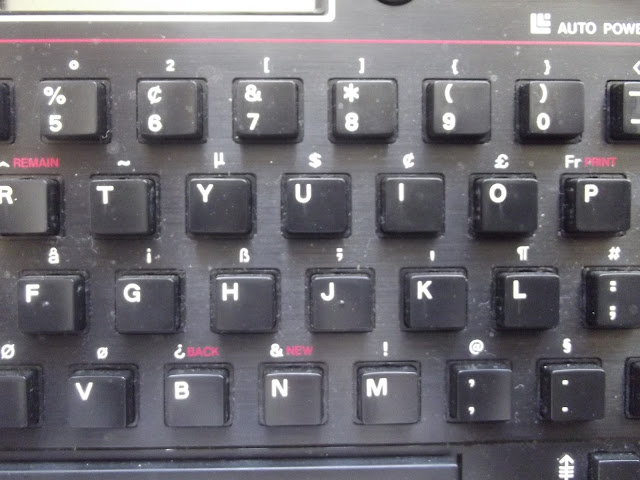 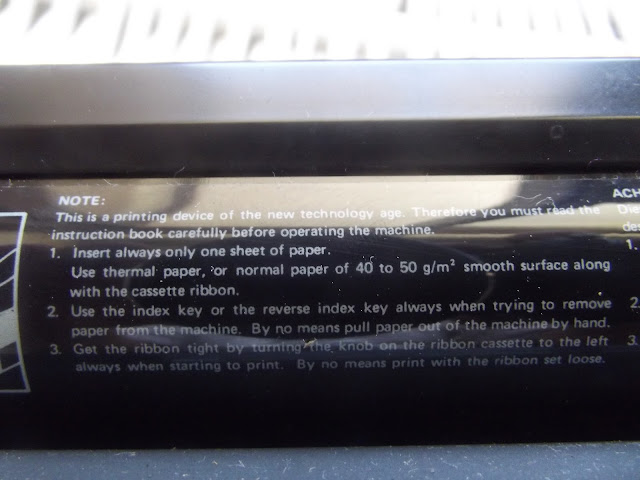 Posted by Robert Messenger at 12:48

I thank you for your report. Very enlightening actually - looks like August 1983, probably towards the beginning of the model. I see at least one extra switch and 3 buttons that mine lacks, seems to be extra memory functions (possibly does do multi-line editing, but as we are both without manuals, hard to tell). Clearly some extra functions involving printer buffering too. Neato!

Same dot-matrix typeface as the EP-20. perhaps they didn't improve the print head until the EP-4x series. Appears to take the same ribbon as the EP-20 too.

I'm sad that you didn't enjoy the little guy as much as I thought you might, but an excellent set of photos nontheless. (:

Have you completed your review from October 2014 of the various Royal Safari models?
I look forward to seeing them
Thanks!
Nick Bodemer

That looks like the font produced by my old Commodore printer (of around the same vintage). I remember that dot-matrix printouts were considered "top-notch modernism" back in the early '80s, when I started handing school reports and homework printed in actual computer paper (complete with the tractor feeder strips... they looked more "modern" and cool than plain old letter-size paper!)

The biggest problem i had with dot-matrix printing in the early '80s was that characters like g, y, p, q were fitted in the same 8x8 matrix as the rest of the letters, and thus appeared slightly misaligned compared to the rest of the text (they appeared compressed and a bit over the top of the other characters). Not to mention the lack of Spanish language characters, like the letter ñ and the accents, so once the homework was printed, I had to go over it again with a pen adding manually whatever accents and Spanish characters missing. Not as neat as the printing of my old Olivetti, but hey, I was being "modern".

Now, coming back to this little Frankenstein. I'm very curious about it because if it uses dot-matrix printing technology it means it should be able, in theory, to produce special characters by means of programming. It would probably be a very slow and noisy printer (just like any dot-matrix printer of the era) but it might be able to produce something a bit more legible...

The Canon Typestar 5 and 7 of the same era have a far superior font, letter quality, and use almost the same technology printing as the brother, a thermal ribbon, unobtainable now. One can use them with Fax Paper [thermal] if you take the ribbon out and print directly from the head!

The Canon has a vastly superior keyboard, a treat to type with, and multiple storage capacity, only a few pages, but with battery power, quite a neat trick, and very quiet printing, it appears to be 'wiping' the text on, and the little teeny motors for the carriage and platen are almost silent, way cool.

I had one of these! I got it on a clearance/close-out sale for next to nothing - with extra ribbon cartridges. When I went to study overseas in England in '92 I lugged it along and it served me (and many others on my program) well. Also once loaned it to my Aunt so she could type a letter to someone in Danish using the å, æ, é, ø characters. You'd access those by pressing the green "2ND SHIFT" button on the lower left of the keyboard.

The red "CODE" button alongside the SPACE bar would activate the functions of the words in red lettering above some of the keys. If I recall correctly the buttons in the upper right (the orange "C" and math functions) were an integrated calculator.

I'm also pretty sure it would only let you work on one line at a time (but at least you could correct errors in it before printing it). However if you weren't paying attention it would let you print right off the bottom of the page.

That annoyed me so much I modified it by tapping into a 5v wire, installing a copper leaf switch by the paper roller, and a bright red LED near the power switch. Paper would feed through the copper leaves and break the circuit, turing the light off. When you got within 1" of the bottom of the page the paper would have moved through the switch and the leaves would touch again turning the light back on - it was VERY bright and hard to miss, but I couldn't believe they never thought to put in a "paper out" sensor.