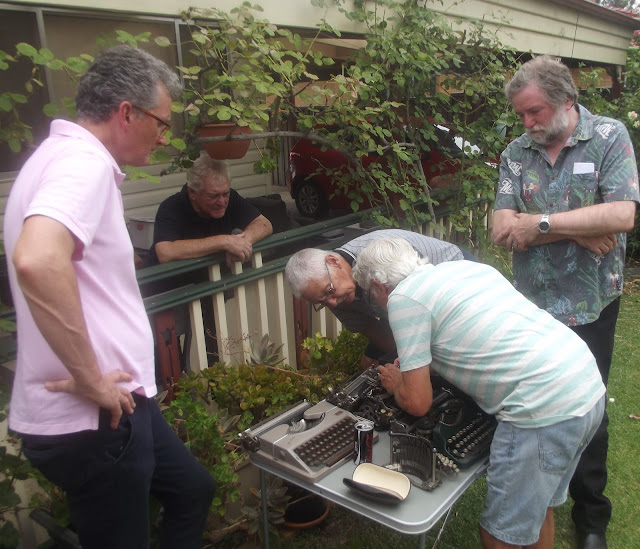 Wednesday's Big Sydney Typewriter Bash very much lived up to its advance billing. The 100-degree temperature cooled no-one's ardour for the occasion, and the six-hour typewriter talk fest steamed on, hot and heavy. It was a lot of fun, and definitely the best typewriter event I've attended since the sixth annual Herman Price gathering at the Chestnut Ridge Typewriter Museum at Fairmont, West Virginia, in October 2013. Not since then I have I seen so many genuine typewriter wizards huddled around machines, pouring their collective expertise into the mix. In truth, there were probably more trained typewriter technicians at Rooty Hill on Wednesday than there were at Chestnut Ridge in 2013. What's more, these masters of their trade each brought along bits and pieces of memorabilia from their days in the once-flourishing Australian typewriter industry, and spoke at length about their experiences. What memories they shared, and what memories we all will now have of this unique typewriter-saluting day. 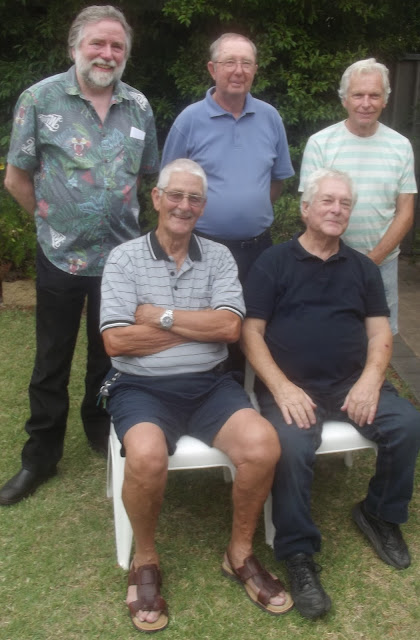 Five of the best: back row, from left - Michael Klein from Melbourne, Jim Franklin from Canberra, Phil Card of Colyton; seated - Warren Ingrey of Stanhope Gardens and Terry Cooksley of Blackett. 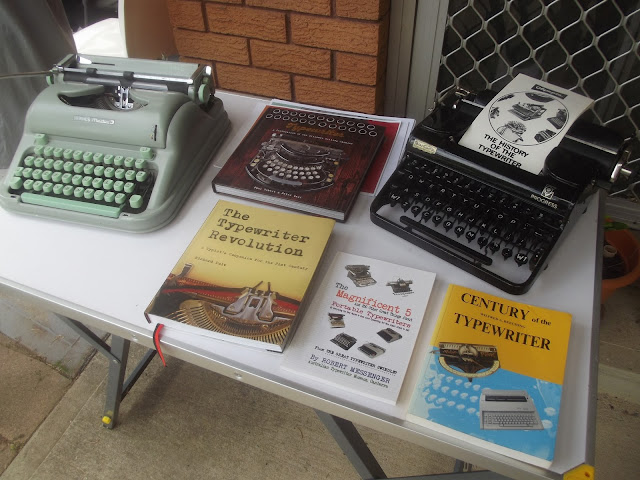 Host Richard Amery greeted us with displays of typewriters fore and aft, plus some associated reading material. This included the latest book from Peter Weil and Paul Robert, Typewriter: A Celebration of the Ultimate Writing Machine. Judging by the comments made about it, I'm sure this new tome from the Newark-based "Weil-werke" will be getting heaps of sales Down Under. 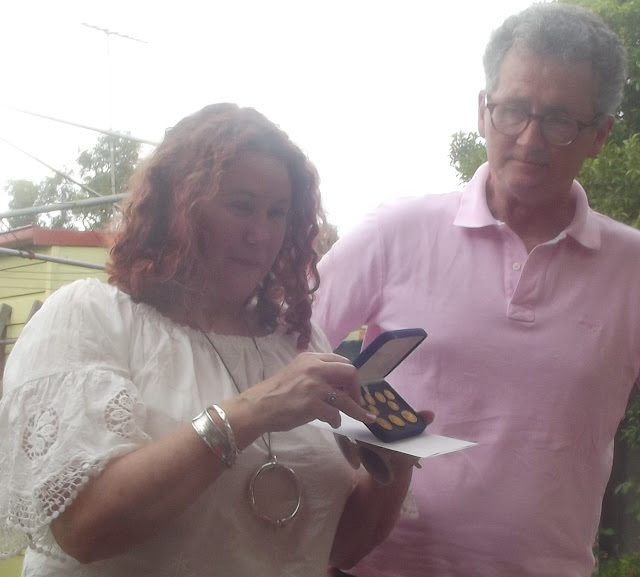 One of the main reasons for the Sydney gathering (as if any excuse was needed) was to farewell Julie and Philip Chapman, whose company Charlie Foxtrot has introduced a new era for typewriter sales in Australia. Julie and Philip are leaving for England next month to start a British branch of Charlie Foxtrot, and I feel sure their impact on the typewriter trade in that country will be as great as it has been here over the past five or six years. The Australian Charlie Foxtrot business will remain in operation under new owners and readers of this blog will be getting a lot more information on both the British and Australian outlets in the coming weeks.
In the image above, Julie and Philip were presented with a set of gold Smith-Corona blazer buttons, produced to mark SCM's golden jubilee in 1962. Then host Richard Amery, donning his 1970 SCM supervisor's clambake apron and chef's hat, rolled out the pre-Christmas spread: 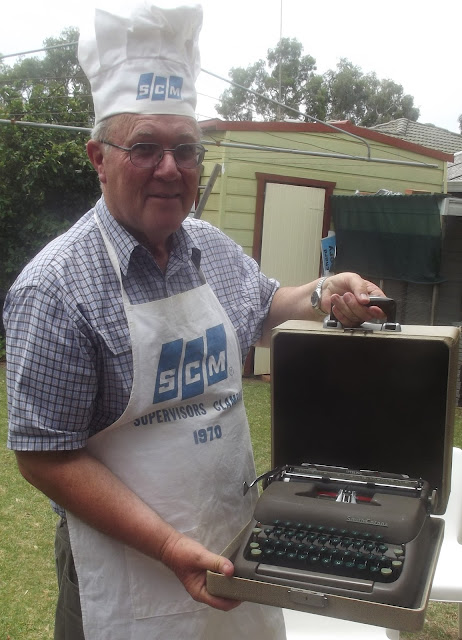 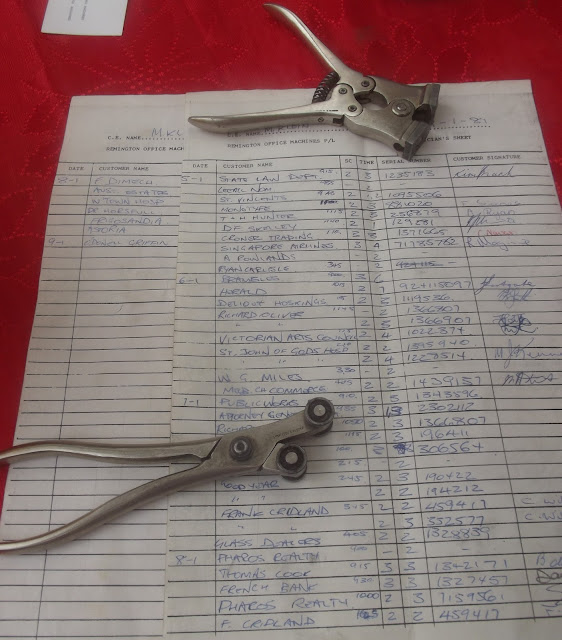 Above, examples of Michael Klein's old work sheets, showing him servicing typewriters at up to 10 workplaces a day in Melbourne, along with a couple of his work tools. Below, some of the single type elements Michael has collected over the years, including a deceptively small type drum from a teletype machine and a more elaborate one from Olivetti. 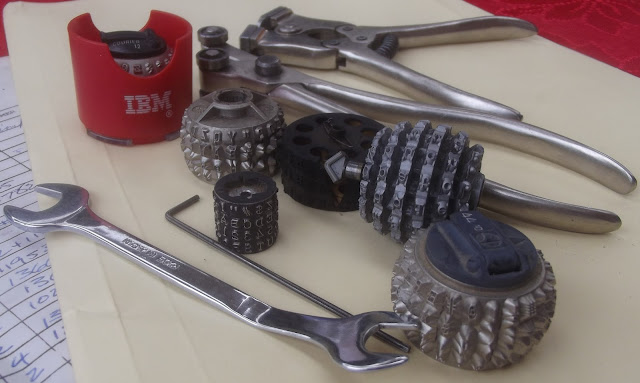 One of the highlights of the day was the "blind" typing test match between Julie Chapman and young Canberran Jasper Lindell, using a Willy Scheidegger Princess Matic with coloured caps on the keytops. Jasper did extremely well with the Scheidegger, but the "go-to" machine he took to the gathering was a Hermes Baby given to him by Georg Sommeregger in Switzerland a few years back.  "You can't leave Switzerland without a Hermes Baby," Georg told him. 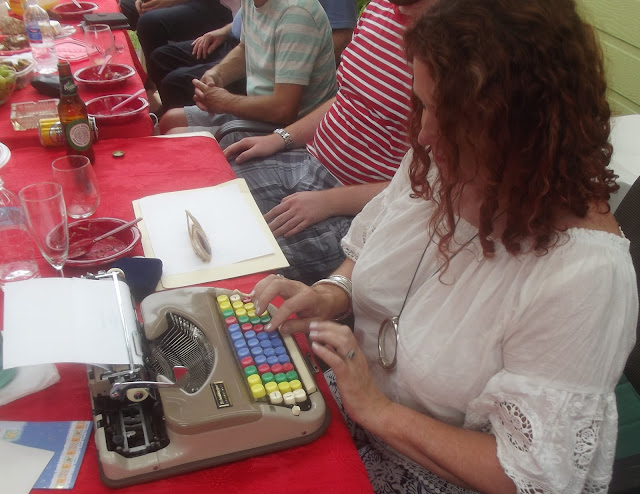 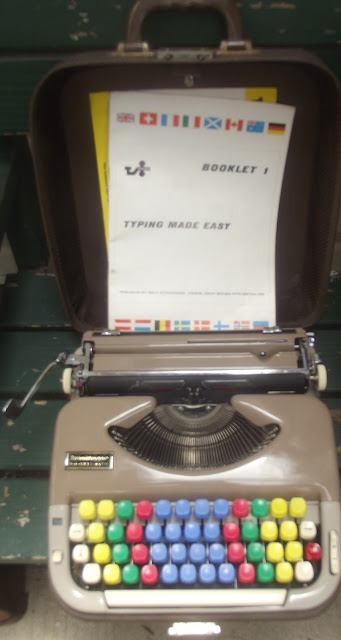 Afterwards, Phil Card, Warren Ingrey and Michael Klein set to getting Terry Cooksley's "new" Imperial Model B portable operational. With such enormous typewriter brain power going into the effort, it was little wonder the machine was soon working like new. 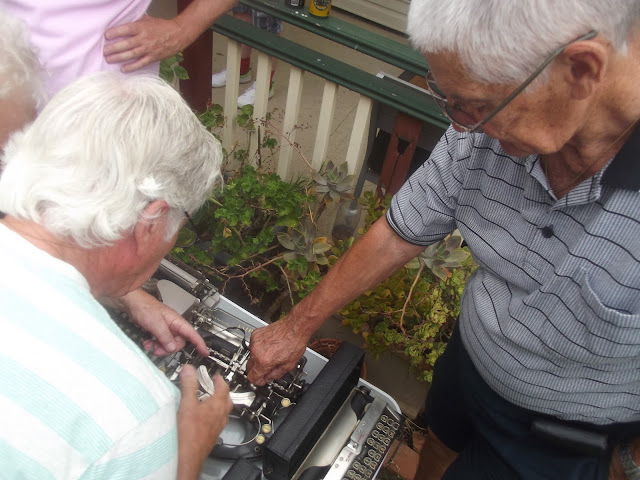 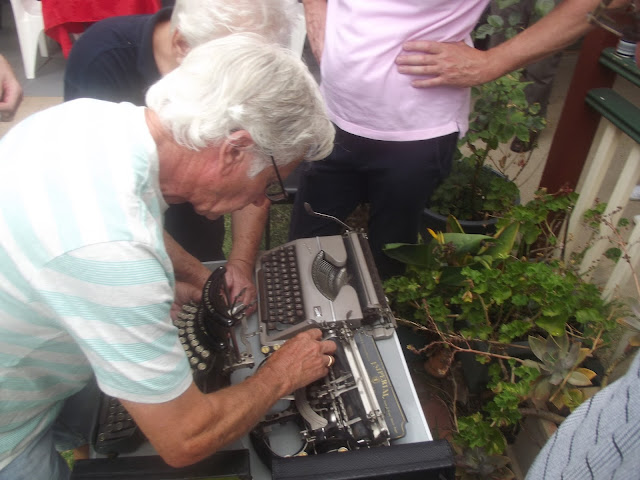 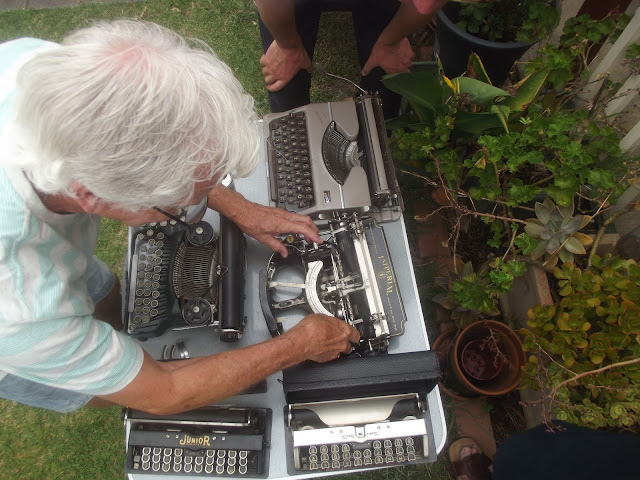 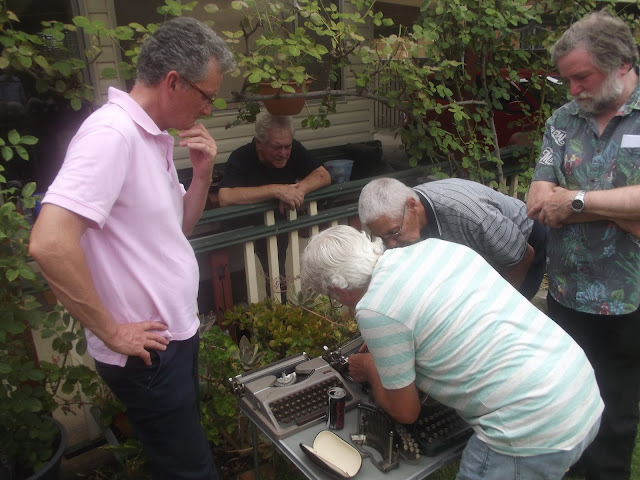 Those books (second photo) seem nice and neat! I (I am JoshBeta1, from Mexico) already got -through Richard Polt- the book named "the Typewriter Revolution" (http://joshbeta1.blogspot.com). xD

But I'd love to get yours (The one about the best portable typewriters ever), and the other ones. It's important -for me- to know more about typewriters because I plan -some day- to write a complete guide -with typewriter brands history included- about all writing machines, since the 19th century writing ball until the 90's electronic typewriters (but in Spanish, the language that we, most of Mexicans, speak). xD

It seems it was a reunion for former typewriter technicians. Astonishing! :D

This looks wonderful. Thanks for sharing some glimpses.

I can't believe it's already been 3 years since we made the trek to Herman's and sampled the delights (?!) of West Virginia Mexican food on the road. Nothing like the good stuff Joshua Beta gets at home, I'm sure.