The book publishing event of any genre in 2015 was undoubtedly Richard Polt's The Typewriter Revolution, an exceedingly hard act to follow. Happily, however, four other typewriter collector-historians have since been game enough to tackle that task. There are now three new typewriter-related works available for those looking for that very special gift for the discerning friend or partner for Christmas 2016.
Peter Weil and Paul Robert have put out Typewriter: A Celebration of the Ultimate Writing Machine, Tyler Anderson has The Fox Typewriter Company available online, and Typex editor Michael A. Brown has released a second volume of his Stolen Typewriters, nine years after the first came out. 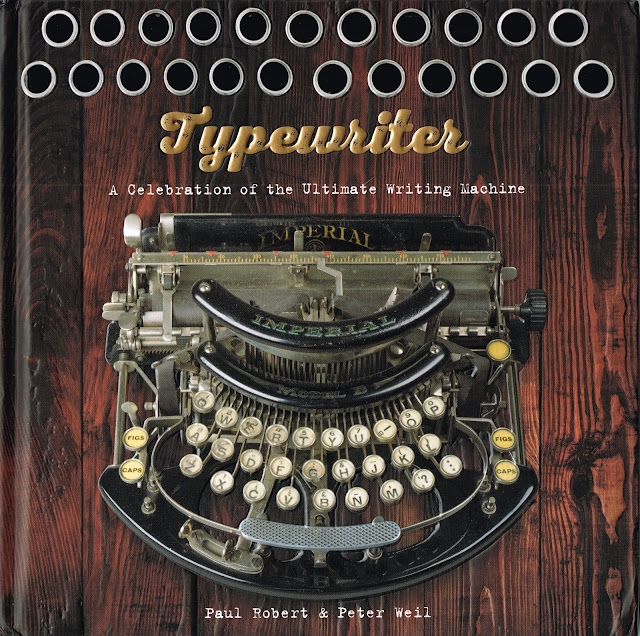 Peter Weil very kindly express-posted me a signed copy of Typewriter and my nose has been so deeply buried in it ever since it arrived that I haven't even got around to thanking him for it yet (shame on me, utter shame). My main excuse is that Peter's book has inspired me to start work on my own new book, A History of Typewriters in Australasia - so inspired, indeed, that I have already written more than 27,000 words and 12 chapters in a month - maybe it will reach its very limited market by Christmas 2017!?
As with Mike Brown's Stolen Typewriters, Typewriter comes nine years after Peter's and Paul's previous joint effort, The Typewriter Sketchbook, to which Flavio Mantelli and Richard Milton were other contributors. Typewriter follows with a hard cover, many more fine images and a stylish layout. 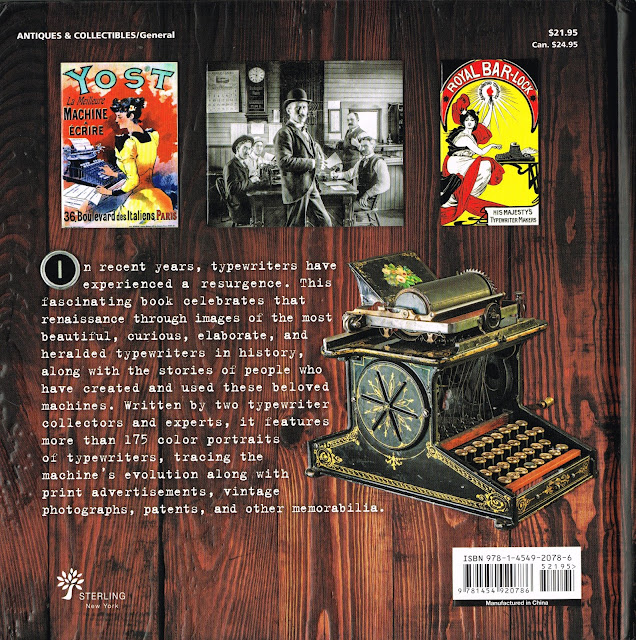 The price makes it exceptionally good value, too. I took the copy Peter sent me to the Big Sydney Typewriter Bash last week and it immediately caught the eye of the many typewriter devotees who were there. I know that at least a couple have already ordered copies online and I suspect there will be quite a few more sales in this country. Of course, an embossed cover image of an Imperial Model B (I also took the real thing with me to Sydney) helped, at least in the case of Imperial aficionado Richard Amery, host of the bash. Yes, Richard is one of those who has already bought his own copy of Typewriters. A review of Typewriters by Martin Howard appears in the December issue of ETCetera. 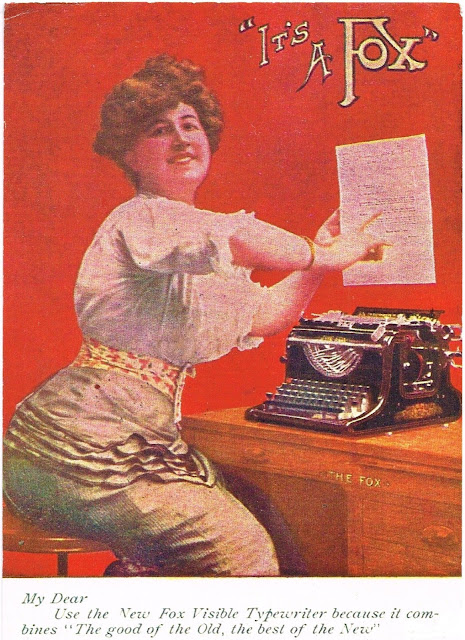 Unlike the various versions of Imperial typewriters, the Fox was never a big seller in Australia. One reason might be indicated by an amusing incident at a meeting of the Hurstville council in Sydney in 1909. Purchasing a Fox was recommended, but when a councillor asked about the maker of the machine, he was told "Reynard and Co."
Had Tyler Anderson been around back then, he would have been able to better inform the councillors. Tyler, perhaps best known to Typospherians as blogger "Words Are Winged", of Spokane, Washington, has written a history of the Fox Typewriter Company, as well as an article on the fortunes of the Fox portable which appears in the latest (December) edition of ETCetera, winging its way to Australia as I write. (It's not too late, by the way, to consider an ETCetera subscription as what would be a greatly appreciated Christmas present.)  Tyler has also air-mailed me, and I was delighted to receive this surprise Christmas greetings postcard a couple of weeks ago. The "It's a Fox" advert seen above was on the front of the card. Tyler's Fox book is available online through Lulu, as was Jett Morton's Oliver Typewriter Company history in 2011. 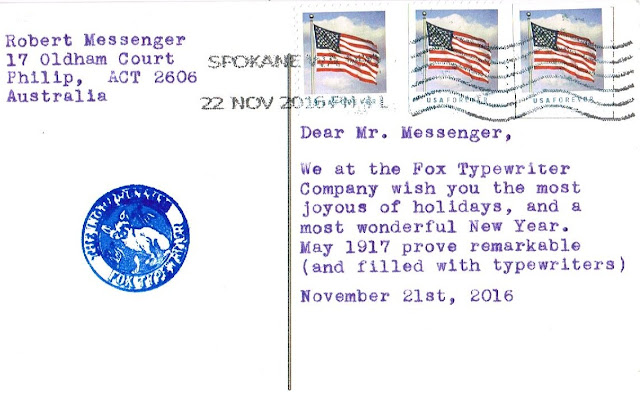 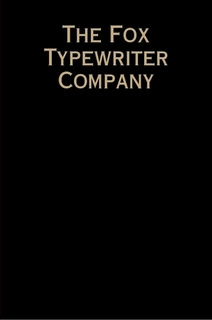 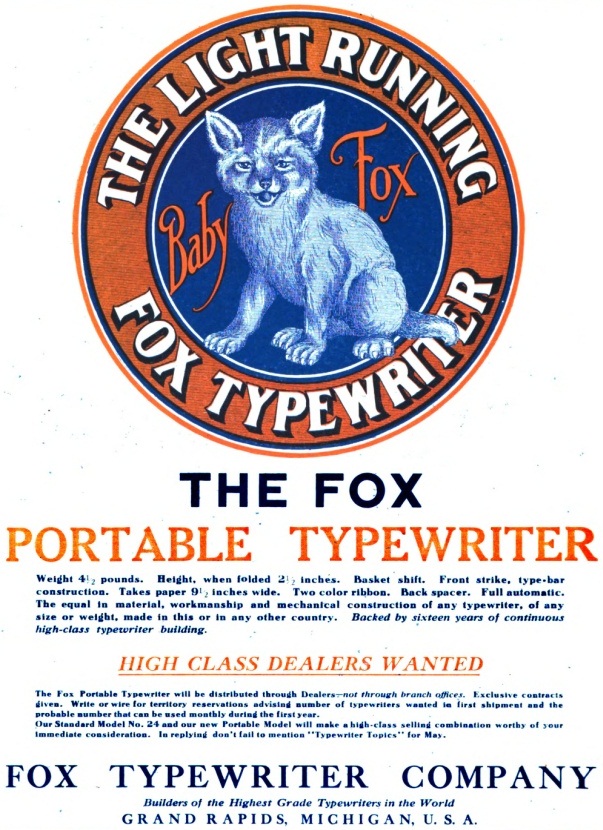 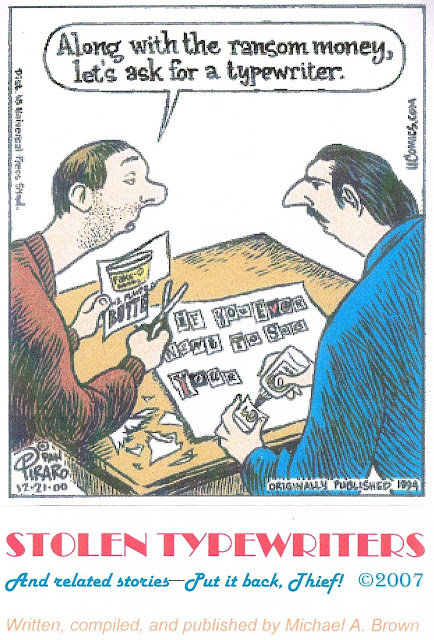 Above is the cover of Mike Brown's first volume of Stolen Typewriters. For a copy of the second volume, contact Mike directly at the Typewriter Exchange (Typex).
Posted by Robert Messenger at 11:51

ooh, good to hear you're working on a new book - looking forward to it (:

I can"t wait for Your book Robert. I look forward to it too.

Thanks for the post. I have 2 of the 3. Now I need to get Typewriter.

Great to hear about your new book!

Excellent! Another book about typewriters! I already have Polt's book, and it's nice and neat. I think this one from your post is also awesome and astonishing as hims. xD

I also am eager to get your book after its publishing... Meanwhile, wait for my letter. xD

I gave myself the Robert and Weil book and Richard's for Christmas from my kids. Weren't they surprised. Thanks for the leads on the other two. I still enjoy Janine Vangool's Typewriter from last year, a beautiful tribute that's heavy on the Royal side. It was a bargain at CAN$50 including shipping. I'm a book publisher, and I can't fathom how she possibly made money or even broke even on that project. I'll definitely buy your book when it comes out, too!

I gave myself the Robert and Weil book and Richard's for Christmas from my kids. Weren't they surprised. Thanks for the leads on the other two. I still enjoy Janine Vangool's Typewriter from last year, a beautiful tribute that's heavy on the Royal side. It was a bargain at CAN$50 including shipping. I'm a book publisher, and I can't fathom how she possibly made money or even broke even on that project. I'll definitely buy your book when it comes out, too!

Thanks for the lead on the Fox book and the one on stolen typewriters. I gifted myself the Robert and Weil and Richard's book for Christmas from my kids and I'm pretty happy with them. I'm still enjoying Janine Vangool's Typewriter from last year, a bargain for CAN$50 including shipping. I'm a book publisher and I can't fathom how she made any money on the book, let alone broke even. I very much look forward to buying your book when it's completed, even if many of the models may not be available in Canada (or are available under different badging). Glad to hear it's coming along so well!