Never Laugh at a Kangaroo - And Never Look a Gift Horse in the Mouth: Typewriters Out Among the Gumtrees 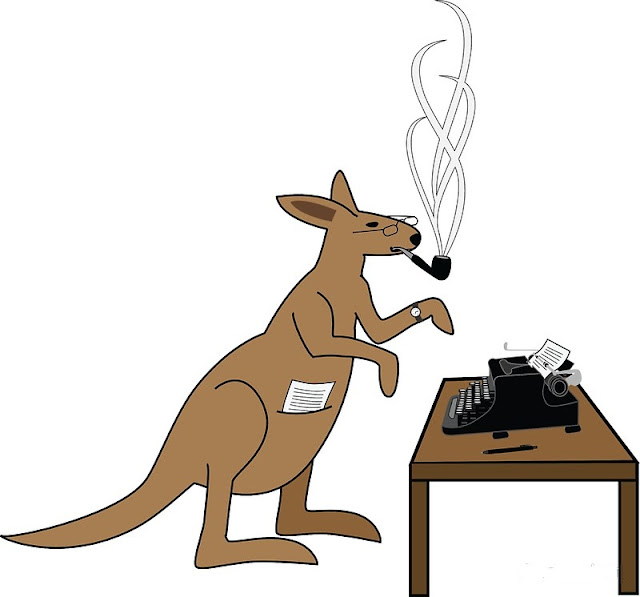 What was once a weekly flood a free typewriters has turned into a tiny occasional trickle these past few years. All the more reason to be all the more appreciative of the few offers that still come my way. A week or two ago I was contacted out of the blue by a woman called Jo Walker, who said she had four typewriters to give me. As it turned out, she had gone to extraordinary lengths to track me down. And it turned out I had to go to some lengths to find her, and her typewriters. 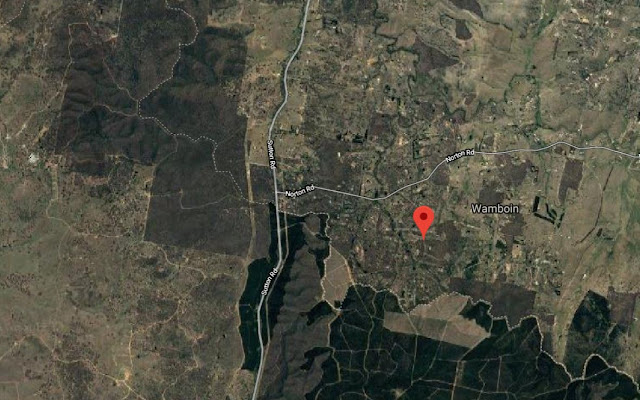 Ms Walker lives on a dirt track off Poppet Road, Wamboin, on the edge of the Kowen Forest. I had no idea where this sparsely populated rural settlement was, although it is a mere 10 miles from Canberra. Wamboin is possibly derived from Wiradjuri wambuuwayn, meaning "large grey kangaroo", although I didn't know that before I set out for Ms Walker's home. When I did find it, after a pleasant midday drive through the forest, on a bright, sunny Friday, the first thing I noticed was the sign, "Wildlife Sanctuary" (Ms Walker also deals in native plants and seeds). Then to my astonishment I found Ms Walker's home completely surrounded by kangaroos. Typically the males among the great eastern grey (or forester) kangaroos mass around 10 stone and stand almost 6ft 7in tall, and have the scientific name Macropus giganteus ("gigantic large-foot"). In the wild, the sight of them can be pretty intimidating. 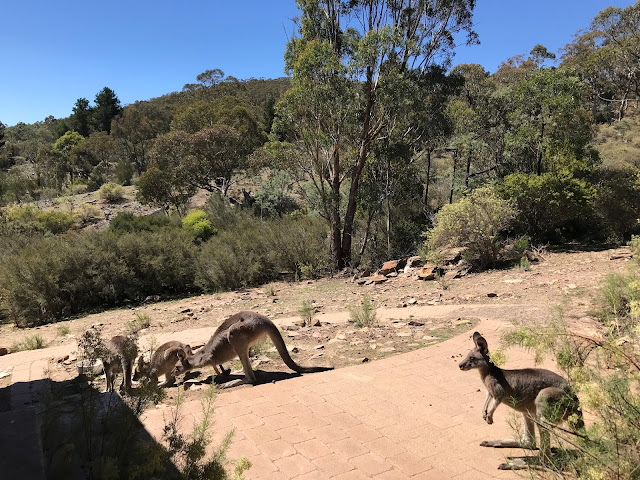 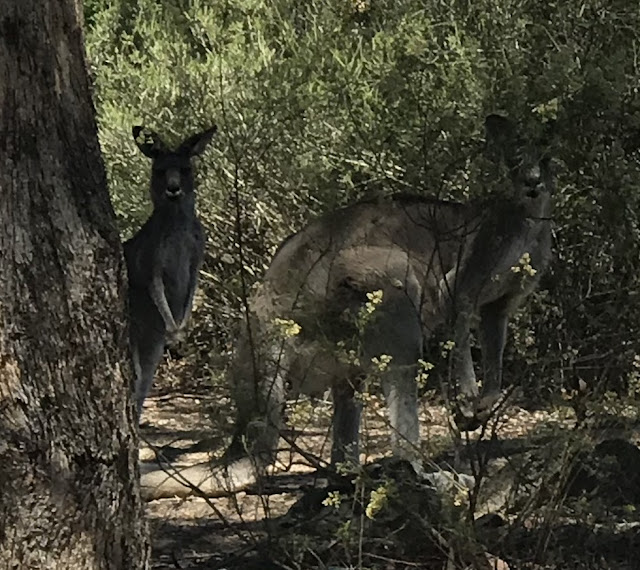 These two massive big bruisers kept a close eye on me all the way. 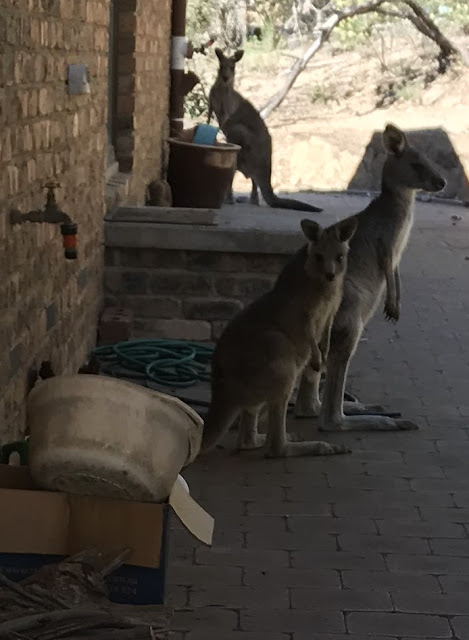 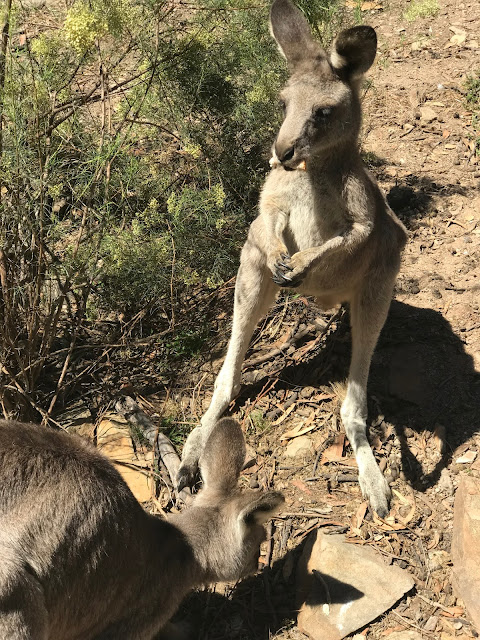 Once the four typewriters had been safely moved to my car, Ms Walker took me to meet some of the somewhat friendlier (and much smaller) members of her roo family. One of them tried to snatch my phone from my hands, and I let out a nervous laugh. "Never, ever laugh at kangaroos," Ms Walker warned. "It's a sound they don't recognise, and it startles and unnerves them. Their communication is all in grunts and growls." Ms Walker went on to say that she has seen kookaburras gather in the gumtrees around her house and start laughing just to see how the kangaroos react. This was all new and quite fascinating for me. Native birds aside, I'm just not a wildlife sort of guy.
But the typewriters ... well there were two wedges, but I did appreciate the two Adler Gabrieles - although one, the electric 2000, has a motor which weighs 5½ pounds, more than the entire weight of a real portable, like a Blick or a Standard Folding: 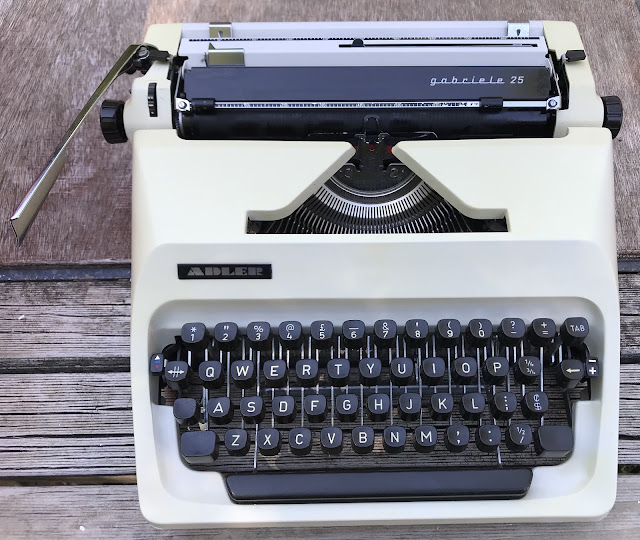 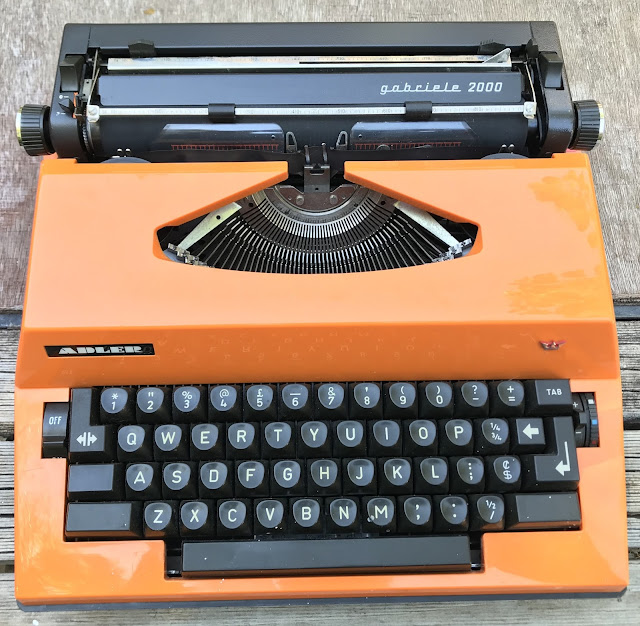 big bunnies :D
Nice Gabriele 25 pickup, and don't forget that electrics are finally starting to get some respect among collectors lately. A few more years and maybe even wedges will be loved. (:

A great story. I'll try to remember never to laugh at a kangaroo!

Aussie wildlife is F-R-E-A-K-Y. Wallabies of any description (and I include kangaroos in this, as they are, scientifically speaking, nothing but big wallabies) naturally occur nowhere else on planet Earth. Same for the wombat, the koala, the Tasmanian devil, the kookaburra... So *odd* is the fauna of Australia that almost nothing indigenous to that country has an English or French name; even the usual name of the kookaburra, which should by rights be called an Aussie kingfisher, comes from a language now likely spoken by absolutely nobody (some estimates put that number at up to thirty, though). Kangaroos are eaten for meat, yet the English language still lacks a separate, French-based word for said meat (like pork for the flesh of swine, beef for that of cattle, mutton for that of sheep, and cheval for that of the horse).

This isn't exactly surprising; Australia was one of the last countries to be civilised (and even then, you'd hardly call the majority of the First Fleet "civilised", being murderers and thieves), mostly because it was sheer hell getting to it.

What is surprising, at least to me, is that Australia has onomastic pitfalls of equal magnitude when it comes to human settlements. Some towns have names that aren't impossible to spell, like Newcastle, Sydney, Melbourne, and Darwin, yet the names of just as many towns are informed by the languages of First Australians (the Pitjantjajarra being an example). It's a shame that the Britons didn't always follow their customary practice of assigning sensible, pronounceable names that are easy to spell and rooted in English, French, Latin, or Irish (such as Godmanchester, Leominster, Lympne, or Durham); instead, one gets names that are whimsical (if you like them) or silly (if you don't), like Cunnamulla, Ulladulla, Wallumbilla, Boggabilla, Kumbarilla, Geelong, Parramatta, Wangaratta, and Coolangatta.

In any case, Australia is a unique country in many ways, and this uniqueness is very visible and easy to appreciate. It will never beat England (except in cricket, which is a damn shame), but the Land Down Under is near and dear to me partially for this exact reason.