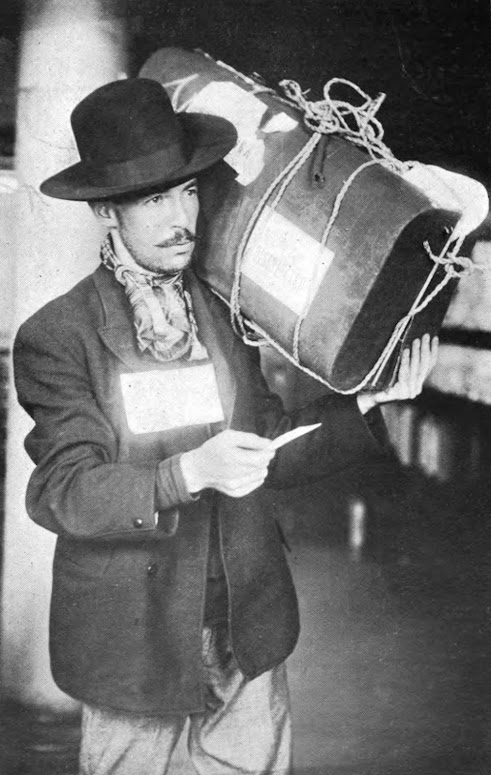 Broughton Brandenburg dressed as an Italian immigrant at Ellis Island, for his 1904 book Imported Americans; The Story of the Experiences of a Disguised American and His Wife Studying the Immigration Question.

He was the sweet-talkin' son of a preacher man who became one of America’s more notorious serial swindlers. Indeed, with the benefit of hindsight, it seems somewhat surprising that in March 1908, three months before former President Grover Cleveland died, The New York Times was foolhardy enough to agree to pay “literary agent” Broughton Brandenburg $500 ($14,300 in today’s money) for a 3000-word article allegedly written by Cleveland while the former president was on his death bed. Only four months earlier Brandenburg had been involved in a bribery and blackmail plot against labor union leader Samuel Gompers (1850-1924), so he had some form in this regard. It turned out that stenographer Lillian Mae Bacon (1889-1941) had bought the typewriter on which the Cleveland article was written on July 20, 1908, almost a month after Cleveland had died. Ms Bacon testified to this in the criminal branch of the Supreme Court of New York City on June 17, 1909, during a trial in which Brandenburg faced a charge of grand larceny in the second degree. 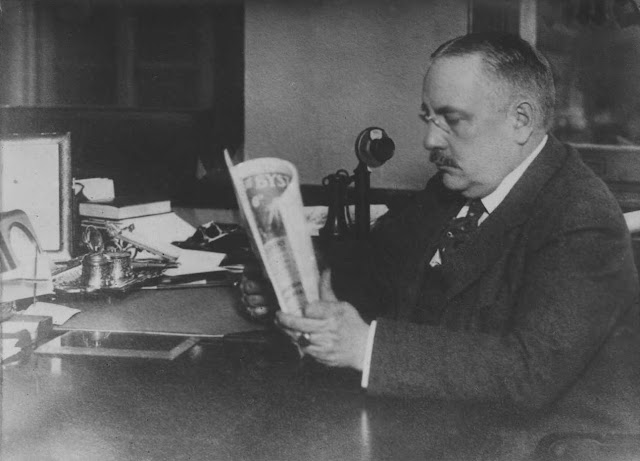 At the same trial, The New York Times’ managing director, the great journalist William Charles Reick (above, 1865-1924), said that in early September 1908, a week after the article had been published, “doubt about its genuineness began to bother him”. Too late! The article, regarded as “anti-Bryan” by most readers, must have been too great a temptation for the Times to resist leading into the 1908 US Presidential election, especially given Brandenburg’s dicey background. Though Cleveland was one of only two Democrats to be elected president during the era of Republican presidential domination from 1861 to 1933, the Brandenburg article indicated Cleveland favoured Republican candidate, William Howard Taft, over the Democrat nomination, William Jennings Bryan, who ran a vigorous campaign against the nation's business elite, attacking “government by privilege”. The Republicans were certain of a safe victory, the Cleveland article correctly predicted. It lauded Taft’s “high ideals of honesty and justice” and said, “The South has long taken a stubborn, foolish pride in its enlistment under the Democracy”. 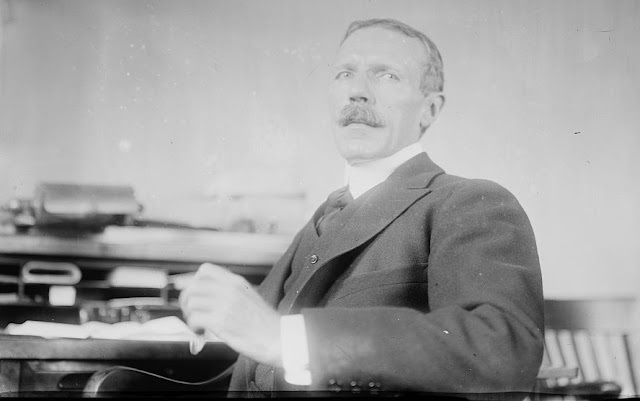 During Brandenburg’s grand larceny trial, Prosecutor Charles Cooper Nott Jr (above, 1869-1957), the then New York Assistant District Attorney, called Ms Bacon, who said she had typed the article according to Brandenburg’s dictation on August 10. It was published by The New York Times in the magazine section of its Sunday edition on August 30, Brandenburg’s 32nd birthday. Ms Bacon had read the published article and recognised it as the one she had typed less than three weeks earlier. She recalled Brandenburg saying at the time that the text she typed was “Clevelandesque”. Her evidence was supported by her young assistant, Madeline Ruth Fearon. 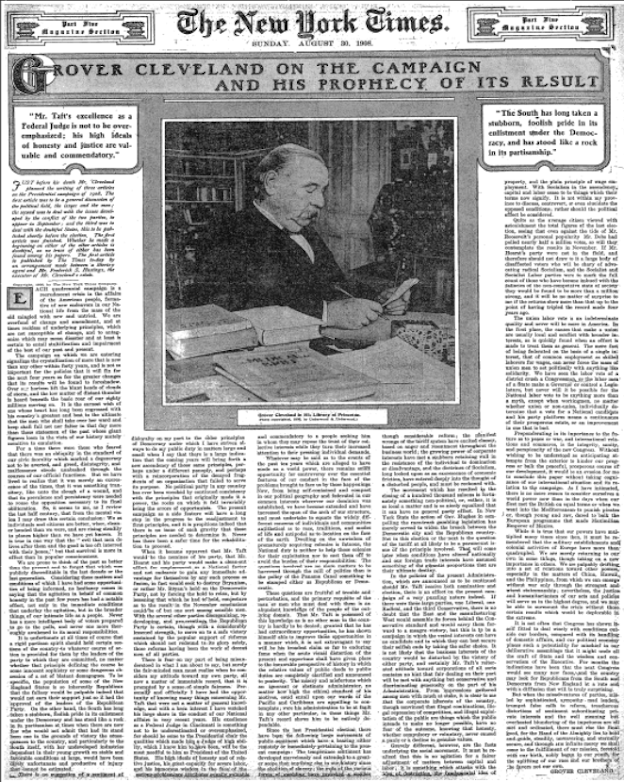 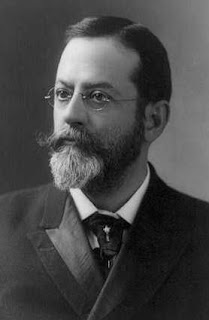 David Nunes Carvalho (right, 1848-1925), a questioned documents examiner of typescripts, ink, handwriting and paper, and the author of Forty Centuries of Ink (1904), told the court he had spent many years studying work done by typewriters, and that Ms Bacon’s typescript matched typing done with the machine she had owned. He was backed up by another typewriting expert, Harry J. Humphrey, of Ilion. But Carvalho’s evidence that the Cleveland signature on the article was a forgery was much more damning. It forced a confession of sorts from Brandenburg on June 18, 1909, when he claimed the real signature had somehow been substituted. These were desperate times for Brandenburg, who could find more ways out of a tight corner than a toilet rat.

The New York Times had, admittedly, satisfied itself at the time it negotiated with Brandenburg for the article that it really had been written by Cleveland. What it didn’t know, until the June 1909 trial, was that earlier in August 1908 the New York Herald had been smart enough to reject the Brandenburg document before it was offered to the Times. It was only after the Herald had turned down the article that Brandenburg had it retyped by Ms Bacon in a more “Clevelandesque” style. The New York Times Sunday editor, Charles Monroe Lincoln (1866-1950), had negotiated with Brandenburg, but it was Reick and fellow co-owner, editor-in-chief Charles Ransom Miller (1849-1922), who made the decision to pay Brandenburg his asking price, accepting the article to be genuine. Reick and Lincoln had come to that decision on the word of Cleveland’s executor, Frank Seymour Hastings (1853-1924). However, Cleveland’s young widow, Frances Clara Cleveland (née Folsom; 1864-1947), still the youngest wife of a sitting president, was among the first to doubt the authenticity of the article. She later testified that her late husband was incapable of writing his signature in full in March 1908. Once the widow Cleveland became suspicious, Hastings quickly notified The New York Times that he was withdrawing his assurances of the article’s validity, then ducked for cover. Again, too late! The Times was less than impressed with him.  Brandenburg was arrested in his home city of Dayton, Ohio, on October 22, 1908. 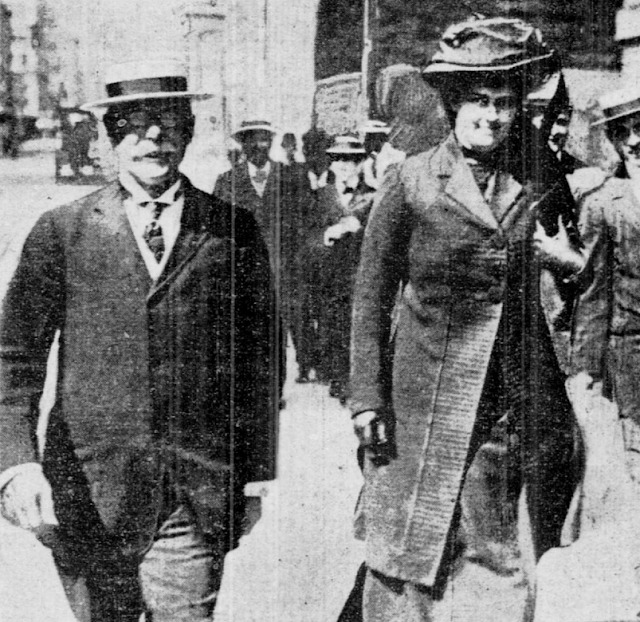 Frank Hastings and the late President Cleveland's widow leave the trial.
Not surprisingly, given the judge’s summation, on June 29, 1909, Brandenburg managed to get himself acquitted of the grand larceny charge, the jury being unanimous on a second ballot. Justice James Fitzgerald (1851-1922) told jurors that the only thing they had to decide was whether Brandenburg stole the $500. They must acquit him if they found the Times had relied solely on the reputation of Hastings as to the genuineness of the article. The forged signature was immaterial, Justice Fitzgerald added, as forgery was not what Brandenburg had been charged with. But Brandenburg was immediately rearrested and returned to The Tombs, this time for kidnapping his stepson, James Sheppard Cabanne III. He was convicted and fined $500. The next year he was arrested for passing a dud cheque and in 1911 he was sent to Sing Sing for forgery. 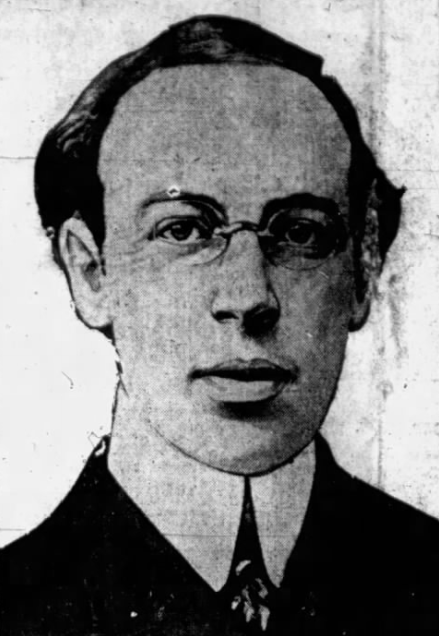 In 1919 Brandenburg (above) reappeared as the Earl Victor Broughton Van (also Von) Brandenburg, an “ex-officer of the Czar”, who was involved in a shady stock concern, and the next year he was sent back to Sing Sing, convicted of selling stock in a mythical asbestos mine on Staten Island. Jail time kept mounting up: 1926, second degree larceny; 1933 petit larceny. 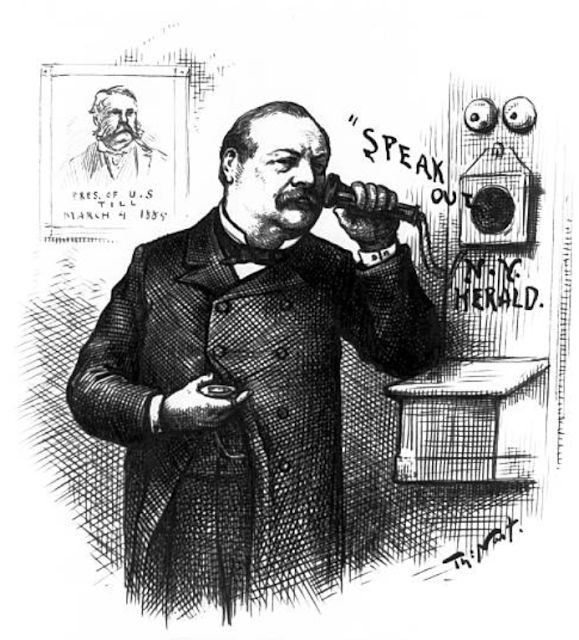 President Cleveland: The New York Herald recognised a fake when it saw one.
His real name all along was Earl Victor Broughton Brandenburg, and he was born on August 30, 1876, in Vandalia, Montgomery, Ohio, son of a then 19-year-old Albert Fowler Brandenburg (1856-1924), later a minister in the United Brethren Church. In 1893 Brandenburg started work as the Dayton Journal Herald’s “classy” reporter. He was the newspaper’s “dandy”, the Journal recalled in 1941, “an all-round street man” covering the theatre, concerts and society’s charity balls in silk topper, cutaway coat and tails, steel gray trousers and patent leather shoes. He covered the 1898 Spanish–American War for Ohio newspapers, then joined New York World and later worked for the Buffalo Daily Review. He was commissioned by Leslie’s Monthly and Collier’s Weekly to investigate immigration problems. Things started to unravel after he married Valine Workman Elsess on New Year’s Eve 1902. She called him “Brandy” but perhaps should have dropped one of the letters. The Journal thought he had passed on by 1941, but in fact he was back living in the area, in New Paris, a village which is part of the Dayton metropolitan area. He died there on February 1, 1963, aged 86, and was buried in Vandalia.
Posted by Robert Messenger at 15:39

Seems not much different than today. The Bush papers and unscrupulous news reporters.