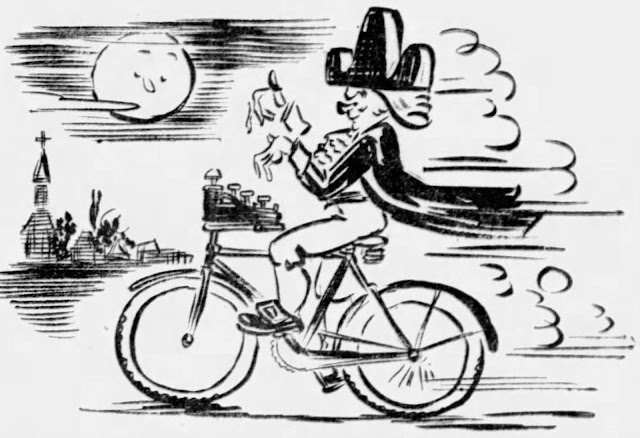 So enamored was Richard Moorsom Harrison with portable typewriters that, armed with a brand new Corona from the Bulmer Typewriter Company in Windsor, Ontario, he light-heartedly envisaged Paul Revere, Julius Caesar, Napoleon Bonaparte and Horatio Nelson using them. Harrison may have had some insight into this, as his middle name honoured Admiral Sir Robert Moorsom, an officer of the British Royal Navy who served during the American War of Independence, the French Revolutionary Wars, the Napoleonic Wars and in 1805 at the Battle of Trafalgar. 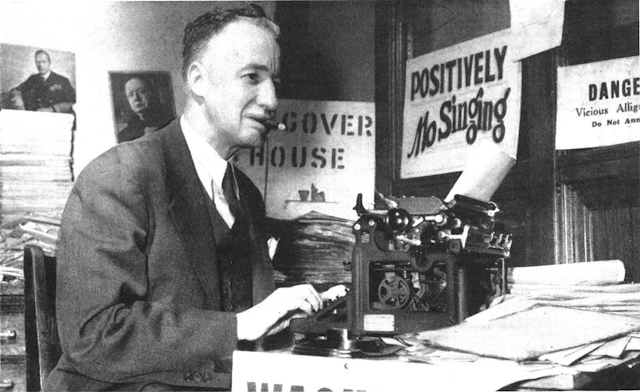 Trent Frayne wrote of Dick Harrison in Maclean’s magazine edition of May 1, 1947, “When he is working he glowers past his cigar at his typewriter, completely absorbed. With his shirt sleeves rolled up a couple of turns he sits patiently awaiting his thoughts and when he gets them he attacks the machine viciously, rapidly and in short spurts. The protesting keys throw up a clatter not unlike that of a machine gun and they seem to take their worst beating when Harrison is thumping out, with two fingers, his ‘Now’ column.”

It would be difficult to image in this day and age of world leaders warring with the Press that a prime minister or president would pay tribute to a newspaper columnist with the words, “He was a benevolent philosopher and humorist and I am very saddened by his death.” But this is exactly how Canadian Prime Minister John G. Diefenbaker described Richard Moorsom Harrison when he heard that Harrison had died suddenly after a heart attack, at 3pm on May 14, 1958, aged 61. 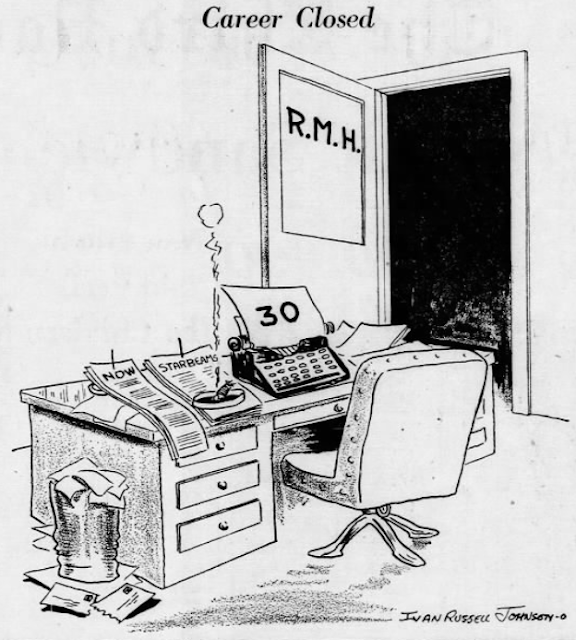 Dick Harrison had written for the Windsor Daily Star on the south side of the Detroit River in Ontario for almost 33 years. In a wonderful profile by Trent Frayne, titled “The Joyful Sage of Windsor” and published in Canadian news magazine Maclean’s on May 1, 1947, Frayne wrote, “Something of a legend in his own time, Richard Moorsom Harrison is one of the most prolific newspapermen in the country, and, the testimony of his contemporaries records, one of the most remarkable in a remarkable business. Harrison is known variously to readers of the Windsor Daily Star, for which he toils six nights a week, as R.M.H., Annie Oakley and plain R. M. Harrison. He is the paper’s columnist, theatre and music critic, book reviewer and editorial paragraphest.  While no one ever has sat down to count his nightly output it is estimated that he subjects his typewriter to roughly 2500 more or less hardwon words per nightly sitting. 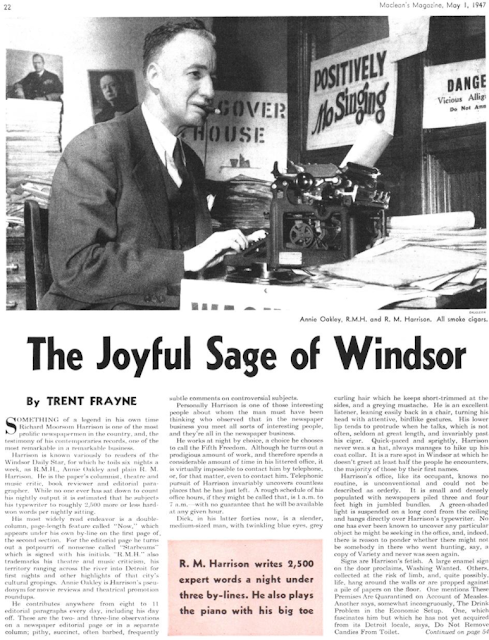 “His most widely read endeavor is a double column, page-length feature called 'Now', which appears under his own by-line on the first page of the second section. For the editorial page he turns out a potpourri of nonsense called 'Starbeams' which is signed with his initials. 'R.M.H.' also trademarks his theatre and music criticism, his territory ranging across the river into Detroit for first nights and other highlights of that city’s cultural gropings. Annie Oakley is Harrison’s pseudonym for movie reviews and theatrical promotion roundups. He contributes anywhere from eight to 11 editorial paragraphs every day, including his day off. These are the two- and three-line observations on a newspaper editorial page or in a separate column; pithy, succinct, often barbed, frequently subtle comments on controversial subjects. Personally Harrison is one of those interesting people about whom the man must have been thinking who observed that in the newspaper business you meet all sorts of interesting people, and they’re all in the newspaper business.” 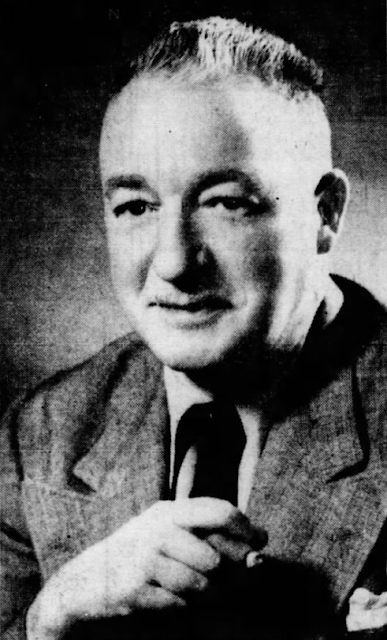 Harrison was born on July 11, 1896, in Carberry, Manitoba. His mother, Julie Mathilde (née Cotte) was descended from the first white child born in what is now the city of Montreal (then Fort Ville-Marie). Paul de Chomedey, sieur de Maisonneuve, first French governor of Montreal, was that boy’s godfather. Dick Harrison began his journalism career with a Winnipeg weekly, the Northwest Review, then went to the Saskatoon Star in 1915 on $12.50 a week and joined the Windsor Daily Star on September 10, 1925.  He had been writing his “Sunbeams” column in Saskatoon and transferred it to Windsor, where it first appeared the day after he joined the Daily Star. His health began to fail after a heart attack at the Windsor Press Club in the spring of 1955. In September 1957 he was stricken with a brain hemorrhage (he called it a “junior thrombosis”) while returning to Windsor from New York. Another heart attack occurred on March 6, 1958. He recovered and returned to work after all these setbacks.

Perhaps one of the most notable among the many awards Harrison won was the 1951 Freedom Award from the British American Association of Coloured Brothers of Ontario in recognition of Harrison’s constant stand for tolerance among people of different races. Throughout his career he also fought particularly hard for the rights of women. 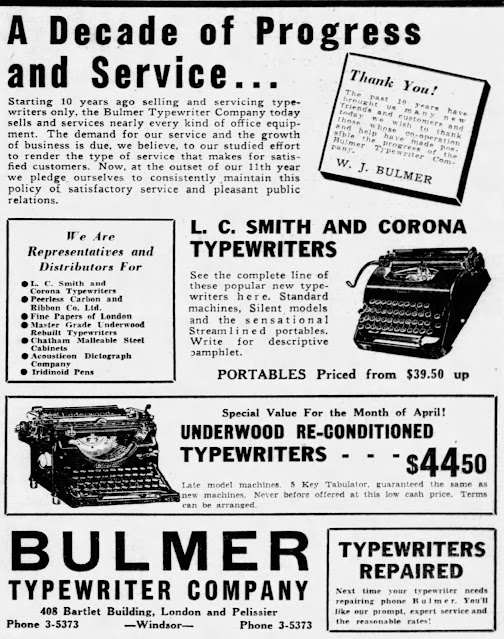 Harrison wrote in his April 25, 1940, "Starbeams" column that it had been inspired by buying a Corona portable from Wilf Bulmer, below: 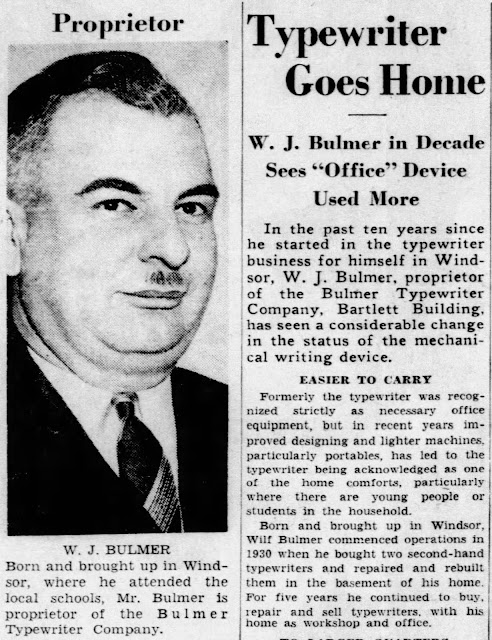 Frayne wrote of him: “Harrison is regarded as one of Canada’s best all-round newspapermen, and one of the most brilliant writers. Gillis Purcell [general manager of The Canadian Press] calls him ‘a real student of the technique of newspaper work’. He can handle and has handled any assignment or job in the business from head[line] writing to copyreading to slot man to sports editor to feature writing to straight reporting.” 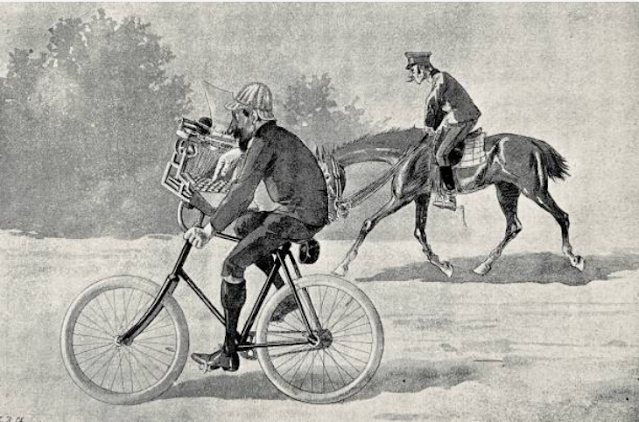 Future for journalists, writing articles on the bike".
Posted by Robert Messenger at 12:32

I enjoyed this, thank you Robert. I also like the new header picture.

I concur with Joe's comment, the header picture is great.

This was a great post, while your new header artwork is wonderful.