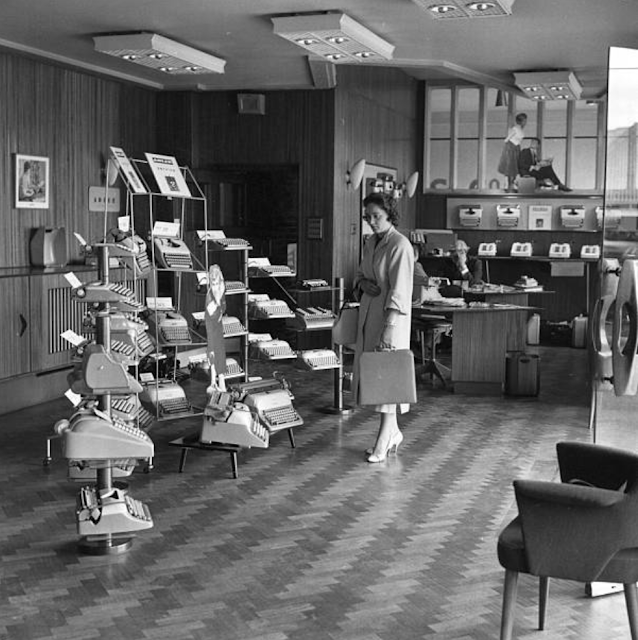 In a perfect world we could all still pop into a typewriter shop close by, of even a large department store, and be confronted by a display wall with a wide range of brand new portable typewriters. If that could be the case in 2021, and I was looking for portables for the Museum of Australian Democracy’s “Yours Faithfully” exhibition, I know exactly what model typewriters I’d be there to buy. They’d be the cheapest on offer, Japanese-made, and either Nakajimas or Silver-Seikos (and at a pinch Brothers). 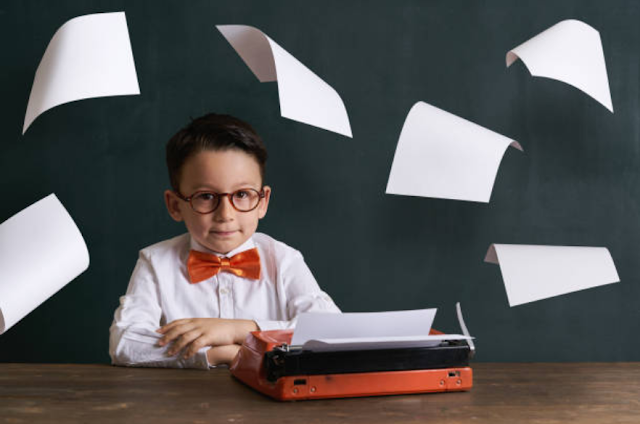 None of us involved in setting up the “Yours Faithfully” exhibition, which opened on December 17, 2019, had any real idea what would become of the portables being used there. I for one didn’t grasp what little supervision there would be. I appreciated that most of the typewriter users would be young children, but assumed they would be there in the company of adults who would understand some care of these machines was required. The museum guides are volunteer staff, and there are too few of them to keep a regular eye on all the exhibitions going on at what used to be called Old Parliament House. The curators are usually occupied elsewhere, and unable to constantly attend to existing exhibitions. But “Yours Faithfully” is absolutely unique, in that it is a “hands-on” exhibition – the machines are there to be used, and as often as possible. 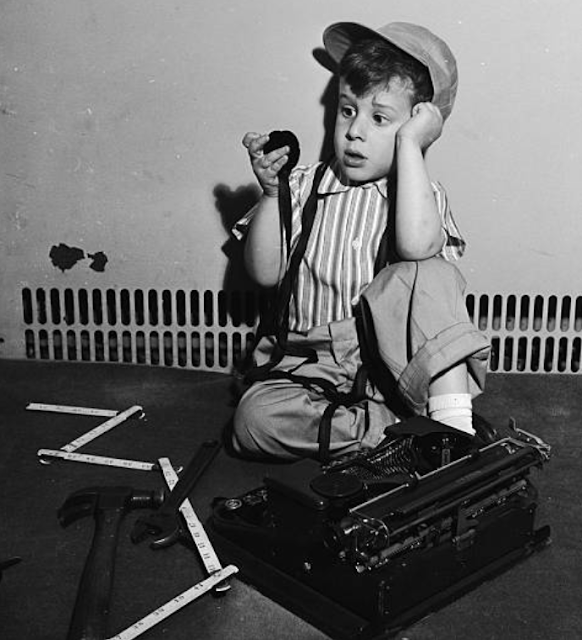 I have been called in many times in the past 15 months to carry out running repairs on the typewriters. At first the problems were mostly minor things – ribbons yanked out and twisted up, carriage locks inadvertently applied (“This doesn’t work!”), spools replaced incorrectly, ribbon colour selector switches moved to stencil, that sort of thing. It was more interesting for me to see which typewriters stood up to the pounding they got – initially, not surprisingly, the Olivetti Lettera 32 and the Hermes Baby seemed to fare best. A Silver-Seiko kept plugging along, as did, in the main, the Olympias. But in time things have become more serious, most notably carriage levers broken off the Baby, an Adler Gabriele and, most alarmingly, a lovely Facit TP1. 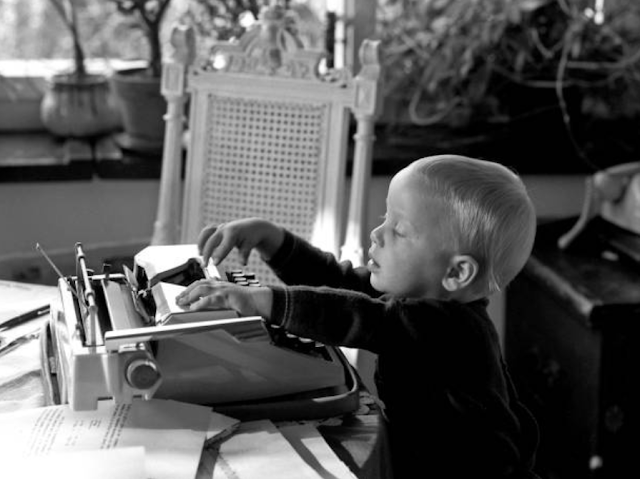 Ribbons and typebars are irresistible to children.
In all of this the one important thing has been to maintain the required number of working typewriters (I would say a minimum of six, with at least four to six as back-ups). The demand has been great, and with the start of school holidays last week there were queues of people lining up waiting for when one of the portables became available to use. That’s great in terms of our wish to see people, especially young people, using typewriters, but the level of wear and tear sometimes appears to almost match the popularity of these machines. 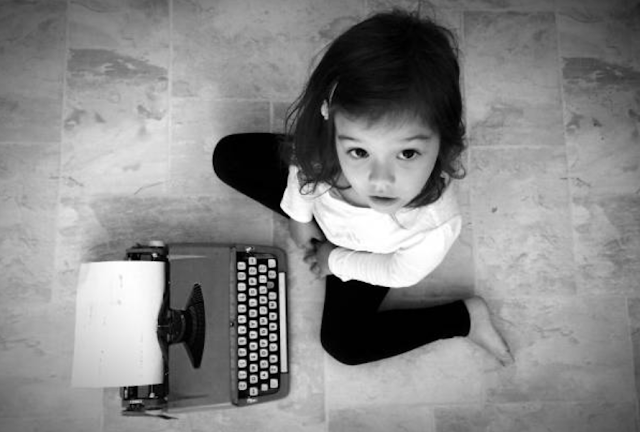 That’s why I say my choice of typewriters for the exhibition would be different now than it was back in December 2019. Back then I supplied what I could, and assumed they could all cope. There were only a couple of Japanese portables among them. In hindsight, and if I’d had a range of typewriters to choose from, I wouldn’t be including Olivettis (there are now two Studio 45s in the line-up), a Dutch-made plastic Remington (also now two), an Adler, a Hermes Bay or a Facit TP1. I’d be just looking for Nakajimas and Silver-Seikos, sold in this country under many brand names (Chevron, Craftamatic, Imperial, Kmart, Majitouch, Pinnock and Royal, to list just a few). These are simple designs, put together in a simple way, and are nothing if not durable - and easy to fix when not. Plus, I must confess, it doesn’t break my heart to see a Nakajima or a Silver-Seiko damaged. Not that any have been, at least not seriously. 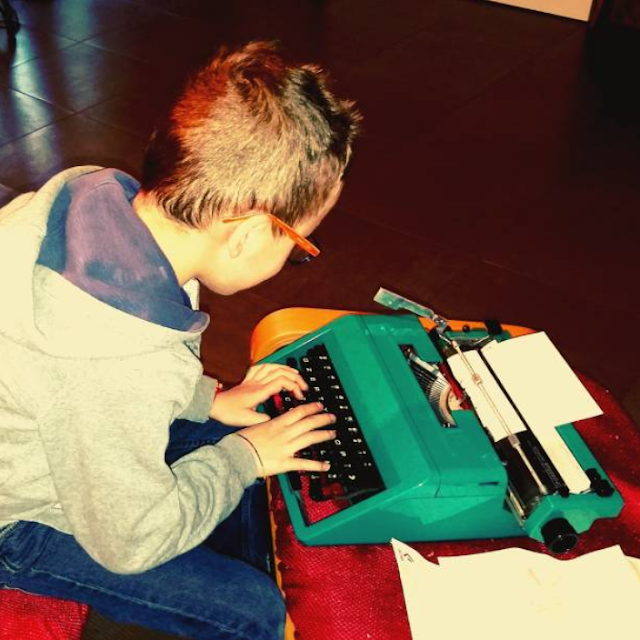 I suspect, however, as demand for Japanese machines rose, production techniques changed and machine assembly became more prevalent. Take for example a Chevron, one of the “Yours Faithfully” faithful which has just joined those few which have fallen by the wayside. It’s actually a Brother 30oT, known variously as an Underwood and Antares 130 and a Privileg, among other brand names. The escapement rail is machine attached to the carriage, pivoting with the carriage release lever on metal studs, and when this arrangement comes apart under heavy usage, manually applied screws can’t fix it. The plate underneath the ribbon spool capstan on the Olivetti Studio 45 is similarly attached, and again beyond repair if it breaks loose. 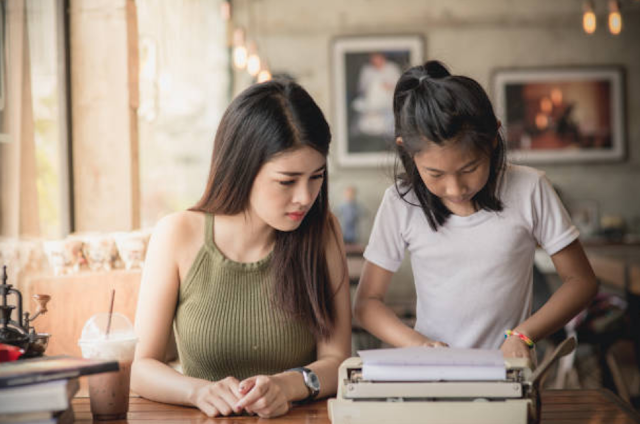 Those portables – thankfully, the large majority - that survive the beating they get at “Yours Faithfully” will be kept going as long as I can manage to continue to make them operational. The bottom line, of course, is that whatever happens to them, they have brought much joy to many, many hundreds of children, and I guess that makes the whole exercise worthwhile. 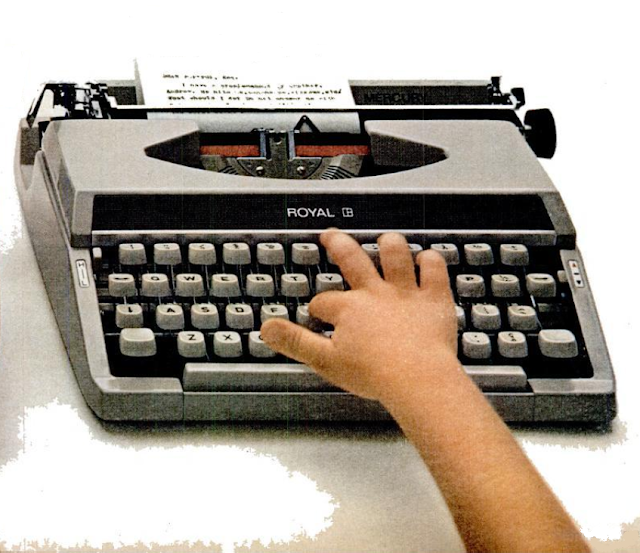 In early December 1967, Royal advertised a range of portables for various age groups, including this Silver-Seiko-made Royal Mercury, aimed at ages nine to 12, which broadly speaking would be the age range of children using typewriters at the "Yours Faithfully" exhibition. Royal didn't make it for kids, Silver-Seiko did, and for all age groups. Still, Royal's other claims are valid - the Mercury is made of steel and it was comparatively cheap back then (K-Mart labelled Nakajimas sold for $50 in Australia, even in 1978). Royal argued there were typewriters made for nine-year-olds, and they were right. It doesn't have doodads, and spending more than $50 on a very sturdy typewriter for a pre-high schooler would have been a boo-boo. 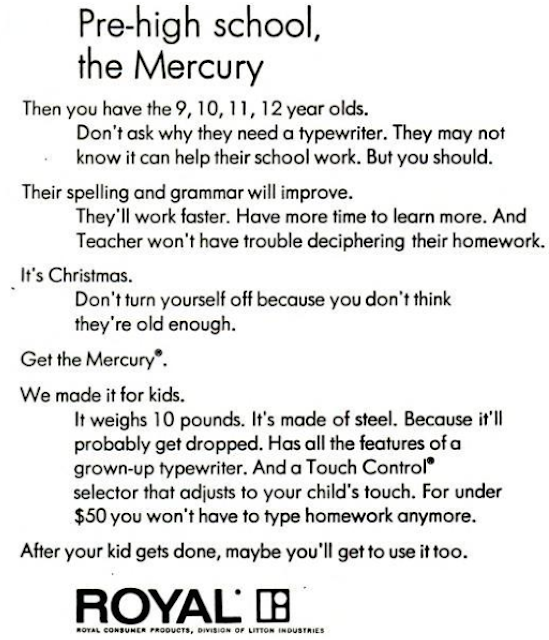 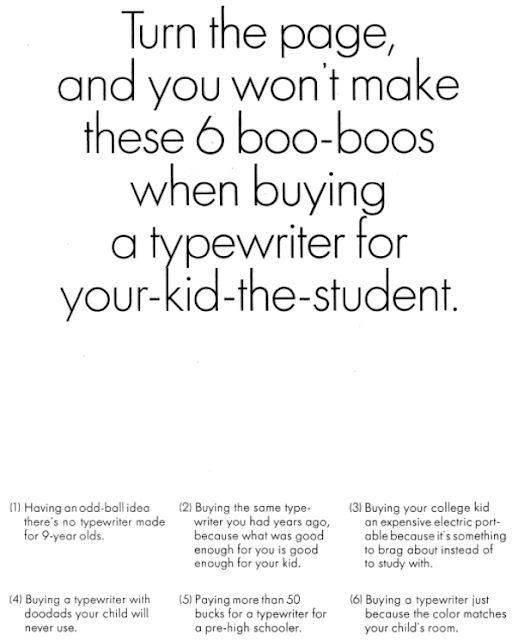 *None of the photographs above were taken at the "Yours Faithfully" exhibition.
Posted by Robert Messenger at 11:36

Interesting observations on child-proof typewriters.
I wonder what would have happened if a typewriter company truly would have made a child size quality typewriter instead of the plastic toy junk that was sold.

doesn't surprise me that Silver-Seiko 700's are great in these conditions. Excellent little beaters. (:
Huzzahs for your work making these machines available for the abuse, though - I have no doubt that you are sparking lots of little typospherians :D

No such thing as child-proof!

The only reliable answer is supervision.

If they bash, hands will be gripped and lifted from the machine and individual marched out of the premises. Rules explained in words of few syllables to Both individual and [alleged] responsible guardian simultaneously.