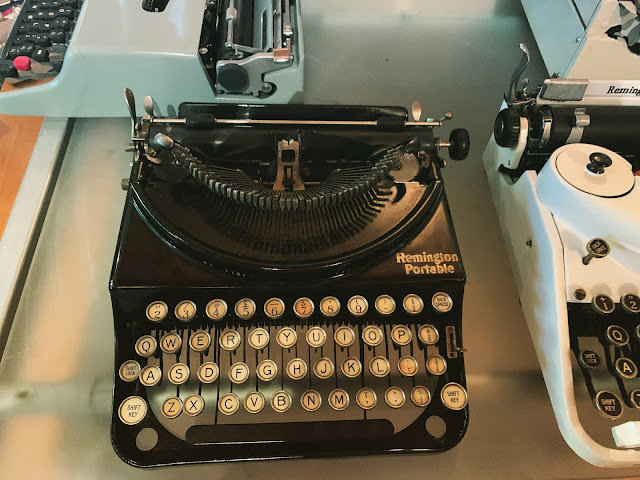 This Remington Model 2 portable typewriter will appear in the upcoming epic fantasy romance film Three Thousand Nights of Longing, being made in Sydney by George Miller (of Mad Max fame) and due for release in September. The movie stars Tilda Swinton and Idris Elba. The two-month filming schedule finally got underway last December, more than six weeks after I had sold the Remington to the production company. After filming they decided it was best off back in my collection, so yesterday they returned it to me for free. A far better outcome than most of my past experiences with film and theatre companies wanting to use typewriters! I was amazed when the set decorating co-ordinator called and said the company felt that instead of the typewriter languishing, gathering dust, among props at the studio, it should be back with me here. I didn’t think twice about accepting! It is, after all, a $60 million production. 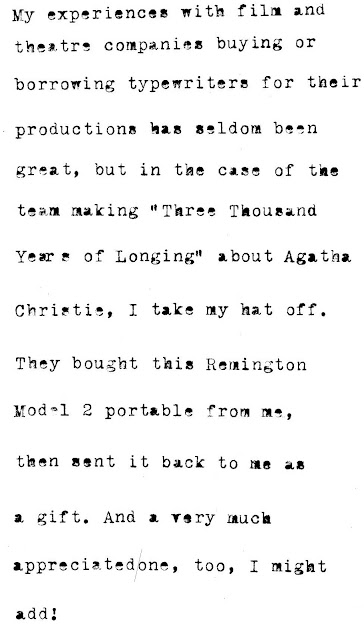 Miller wrote the script and directed Three Thousand Years of Longing, said to be a love story involving a genie. He took some time away from films after the release of his Oscar-winning Mad Max: Fury Road before embarking of this latest project, saying of it that “It’s the anti-Mad Max”. Three Thousand Years of Longing is the story of two people over a very long period of time. Other than that, who knows what to expect? Miller’s long-time producing partner, Doug Mitchell, said the sets are “some of the most spectacular I’ve ever seen”, and that’s saying something. Mitchell adeed, “George thinks this is the best crew he has ever worked with.” Miller himself has let loose this much: “It’s a movie that is very strongly visual, but it’s almost the opposite of Fury Road. It’s almost all interior and there’s a lot of conversation in it. There are action scenes, but they are by-the-by …” The International Movie Database says, “A scholar, content with life, encounters a Djinn who offers her three wishes in exchange for his freedom. Their conversation, in a hotel room in Istanbul, leads to consequences neither would have expected.”

Filming was also due to take place in Turkey and Britain, but in the end the entire movie was shot in Australia. Metro-Goldwyn-Mayer acquired the distribution rights last May and will distribute via its United Artists Releasing label.

Today was a day of double-celebration, as I had my two sons, grandson and grand-daughter and two daughters-in-law together for my 73rd birthday celebrations: 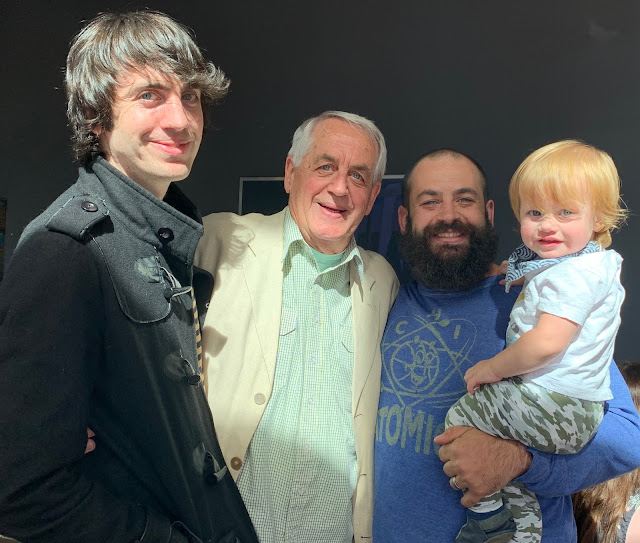 Posted by Robert Messenger at 16:59

Neat! I loved Fury Road and am looking forward to this new film, sounds very intriguing. Congrats on getting the now-storied typer back and happiest of birthdays to you, sir! (:

Happy Birthday, Robert! A fine gesture to return your typewriter.

Congratulations on another year, another b-day, and getting the Rem back.