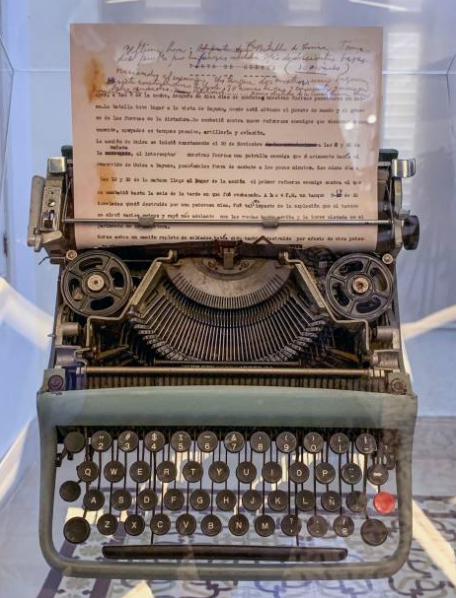 Fidel Castro’s much battered and bruised Olivetti Lettera 22 portable typewriter went on display at the Fidel Castro Ruz Cuba Center in the El Vedado neighborhood of Havana last Thursday. The centre aims to “perpetuate the thoughts and preserve the writings of Cuba’s revolutionary hero”. The center opening was part of commemorations marking the fifth anniversary of Castro’s death, aged 90. It is the first and only Cuban building to carry his name.

A law passed a month after his death in 2016 prohibits the naming of institutions, squares, parks, roads or other public places after the former president. Also banned, in accordance with Castro's wishes, is the erection of monuments, busts, statues or plaques in his name or image -- though this has not prevented the proliferation of murals and placards on the streets of Havana.

The only exception to the law are institutions created solely for “the study and dissemination of Castro's thinkings and work”.

President Miguel Diaz-Canel, who took over from Fidel’s brother Raul Castro in 2018, tweeted that Castro's office at the seat of government, the Palace of the Revolution, “is as he left it on his last day there”. “I try to imagine him in the midst of the hard battles of so many challenging years. It inspires me, it excites me. And I'm still fighting,” the president said.

Having spent much of the past year writing the biography of the New Zealand-born journalist and spy who, according to Ian Fleming himself, was the real inspiration for James Bond, I am particularly interested to know Castro used an Olivetti Lettera 22. Castro threw the subject on my book out of Cuba, not so much for his newspaper writing as his spying activities on behalf of the US.

Posted by Robert Messenger at 18:36

Let us know when the biography will be available, it sounds fascinating.

There's a typewriter with history.

I am fascinated by Fidel's prohibition on monuments to himself. It testifies to a certain genuineness. At the same time, it's a dictatorial command. Very Castro.

That typewriter has the Mexican layout. That's interesting.