When Your Own Typewriters Are Trapped Behind a Paywall 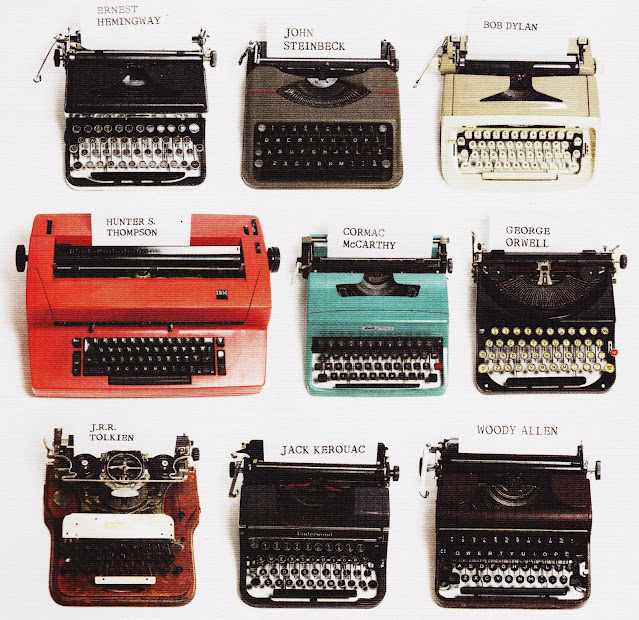 I wasn’t sure whether to laugh or cry this morning when, scrolling through photos of typewriters on Google Images, I came across – at the top of the first onscreen page - a montage of my typewriters. These were nine machines photographed by Amanda Austin on the floor of my lounge room in Swinger Hill more than 10 years ago. The shots were put together for the cover of the first issue of Smith Journal, which came out on September 5, 2011 – 20,000 copies were sold.
I wasn’t so much surprised to see the montage still featuring so prominently on Google Images, a decade after it was assembled and published. Soon after that first Smith Journal came out, screenshots of the cover, sans the masthead and all other details, were proliferating on such places at Pinterest, but never with any credit to Austin or to the owner of the typewriters.
What happened today, however, is that when I clicked on the image of my machines, I was directed to the London Daily Telegraph website, and found to my amazement that my typewriters were behind a paywall. Not only that, but I'm not allowed to save the shot from Google Images. I have no idea why the Telegraph Media Group thinks it can charge me to look at a photo of my own typewriters (and samples of my typing), but I can say without fear of contradiction that it has no right whatsoever to do so. I’m also safely assuming Austin and I get no credits.
The background to all this is that in mid-2011 Frankie Press in Melbourne contacted me and asked if they could photograph some of my typewriters for a planned feature about famous writers and their work tools, the idea being to run a spread in frankie magazine. Right up to the time the first Smith Journal came out, I was still under the impression the typewriters would appear in frankie. Anyway, Austin made arrangements to come from Sydney to my then home in Canberra for the photo shoot.
I didn’t know how Austin planned to set the typewriters up, but to help her identify which machine was associated with which writer, I printed out A4 sheets (using one of Richard Polt’s online typewriter fonts) with the name of the author in capital letters. I then wound the sheets on to the platens of the typewriters. Even when Austin left to return to Sydney, I was still under the impression that the shots which included the name sheets would only be used for identification and captions.
It was only when I received a couple of advance copies of the first Smith Journal that I became aware of the cover montage – and that Austin’s photos with the name sheets in the platens were the selections used throughout the magazine. So featured on the cover and nine full pages inside Smith Journal were not just my typewriters but my typing (and Richard Polt’s font).
With the benefit of hindsight, I should point out for those reading the spread today that 10 years ago I got Bob Dylan’s typewriter slightly wrong: I have since uncovered the fact that he used a Royal Caravan, not a Royal Safari or a Royal Sabre (the differences between them are minute). Dylan was photographed by Douglas R. Gilbert as he was typing the liner notes for his fourth album, Another Side of Bob Dylan, in his writing studio above the Café Espresso on Tinker Street, Woodstock, New York, in August 1964.
The pieces that went with each of the nine machines inside the magazine were written – and very poorly written, I thought - by Benjamin Law, who has since gone on to fame and infamy as an author and journalist. His books include The Family Law, shortlisted nominee for Book of the Year at the 2011 Australian Book Industry Awards, and Gaysia: Adventures in the Queer East. Family Law was adapted into a six-part television series for the SBS network in 2016 and won the Screen Producers Awards for Best Comedy and was nominated for two Australian Academy of Cinema and Television Arts Awards. In April 2018 Law became an ambassador for the National Library of Australia.
Posted by Robert Messenger at 12:47

Mass media can be evil sometimes...

When I search Google Images I'm not successful in finding the Telegraph site (or Smith Journal, for that matter), but I did find a couple of blogs that used small versions.

You should have received a complimentary copy of the Smith Journal when the issue came out. It would have been a nice gesture on the photographer's part to give you a print, too. Beyond that, it's hard to think of a practical method for all media sites to exempt their contributors (advertent and inadvertent) from their paywalls.

The sad truth is that any image, once published on the Internet, will be used and reused without credit or attribution. It only takes one link in the copy chain to leave off that attribution so that it will be lost in all further appropriations originating at that link. For an interesting example, see the tale of Richard Polt's Underwood 5, which at one point, and unintended by me, appeared on a bumper sticker on my own car.