Wills, Lies and the Murder of History

Captaining Australia’s national cricket team is often said to be the second most important job in the country, after that of the Prime Minister. The Australian XI goes into tomorrow’s First Ashes Test in Brisbane in one of world’s oldest sporting rivalries - against England - with a new man at the helm, pace bowler Pat Cummins. Until a week or so ago, the captain was wicketkeeper Tim Paine, but then Paine got caught up in a mind-blowingly senseless sexting scandal and retired.

Australia’s first native-born champion cricketer was Tom Wills (1835-80), who was sent to Rugby School in Warwickshire in 1852, intended for Cambridge University. He neglected studies for cricket and school football and returned to the colony of Victoria qualified for little else but hitting or kicking a ball. Nonetheless he became a well-known figure, helping put cricket on such a sound footing it became Australia’s only truly national sport, and starting an indigenous football code. Things started to go downhill for Wills in October 1861, however, after his father Horatio Wills and 18 men, women and children in Horatio’s party were murdered by Aboriginals while overlanding in Queensland. Tom Wills became a serious alcoholic and suicided in 1880.
Eleven weeks ago Wills was the victim of an appalling lie told by the Australian Broadcasting Corporation, this county’s national, publicly-owned broadcaster. The lie was quickly picked up, unchecked, and then perpetrated by the Melbourne Age and the Sydney Morning Herald (both owned by Kerry Stokes’s Seven Network), Murdoch’s Melbourne Herald Sun and Sydney Daily Telegraph, the Special Broadcasting Service and an online site called The Conversation. Only Sky News commentator Andrew Bolt, who writes for the Murdoch papers, has corrected his false assertions. None of the other broadcasters, newspapers or websites have yet owned up to being so wrong, and have thus allowed the lie to grow and fester. 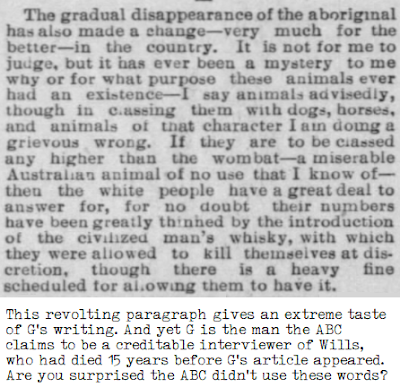 I contacted the ABC’s Media Watch programme, the Sydney Morning Herald, SBS, The Conversation and Bolt with firm evidence discrediting their stories, and only Bolt responded. I gave him the evidence that completely refuted the claims against Wills, and he realised the error of his way. We discussed using my name when he set the record straight in print, but I told him I was “gun shy” after some years ago exposing the lie that track sprinter Peter Norman had been refused selection for the 1972 Munich Olympic Games because he had stood on the medal dais when Tommie Smith and John Carlos made their Black Power salutes in Mexico City in 1968. I won $120,000 in damages in a defamation case against Norman’s nephew, but didn’t get to see a cent of it. Establishing the truth in Australian sports history doesn’t pay, it just leads to abuse – abuse of the truth and abuse of the truth-tellers.
The vile accusation originally made by the ABC against Tom Wills was that he joined vigilantes after his father’s murder and indiscriminately killed Aboriginals in a bout of bloody reprisal and revenge. As with the Norman story, there isn’t a single shred of evidence to support the claim. Indeed, few things could be further from the truth than that Wills went on a deadly rampage against indigenous people in Queensland, murdering en masse.
How did this monstrous lie come about? A Melbourne-based “researcher” called Gary Fearon found an article which appeared on page 34 (in the fifth section) of the Sunday Chicago Tribune on January 27, 1895. Yes, 33 years AFTER the murder of Horatio Wills and 15 years AFTER Tom Wills suicided. And yes, something published in far-off Illinois 126 years ago! The article, “Old Days in Australia”, which appeared over the non-de-plume “G”, was a work of complete fiction which used the name Tom Wills but was in no other way related to the life and family of the Australian sportsman. What’s more, the story was set in Victoria, not Queensland, and some years after Horatio Wills’s death 1861. It involved an English family which had settled in Australia during the 1860s: two parents, three daughters and a son. Tom Wills’s parents were both Australian-born and Tom had three brothers and five sisters, all of whom lived into the 20th Century. G’s story occurs at Christmas, the real massacre occurred in October. 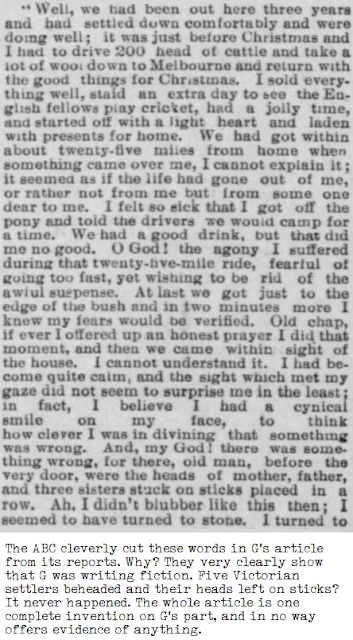 Only a fool could have read in full G’s exceedingly offensive and racist Chicago Tribune story and think it was about the real Tom Wills. But neither Fearon nor the person who wrote the ABC story, Russell Jackson, were fooled. Jackson’s story was illustrated with just one small snippet of G’s article, one that had been cleverly sliced to hide any details which made it clear it was NOT about the cricketer. Fearon is apparently only too well aware “the article contains numerous errors and exaggerations”. It should be recognised for what is actually is: complete fiction
Under the Australian Broadcasting Corporation Act 1983, the ABC Board is bound to ensure that “the gathering and presentation by the Corporation of news and information is accurate and impartial according to the recognised standards of objective journalism”. In the Wills case it has failed miserably. There are many right-wing politicians and commentators in Australia who have been actively campaigning against the ABC, as an “anachronism that has long passed its use-by date”, arguing that it should be privatised, gutting or defunded. Stories such as the false one about Wills only strengthens their argument.
Posted by Robert Messenger at 20:17