Four of the world's fastest typists ever: from left, George Hossfeld, Stella Willins, Irma Wright and Albert Tangora.
Forgive me for seeming to be a little parochial here, but I will be looking at individual typewriting champions in chronological order. And thus I start with a New Zealand-born Australasian record-holder, Henry William Lockyer Digby.
Digby (above) was born in Christchurch in 1879 and educated at Canterbury College. He studied shorthand and typewriting with marked success and became a member of the National Union of Typists. His biography says that his “record as a shorthand writer and typist has been one of the most brilliant ever achieved”.
I’m going to take the liberty of otherwise skipping the period from 1888 to 1906. For one thing, those typewriting contests between Frank E.McGurrin, Louis Traub, Thomas W.Osborne, Mae E.Orr (above) et al are comprehensively - indeed, more than adequately - covered in the QWERTY People Archive at http://kanji.zinbun.kyoto-u.ac.jp/~yasuoka/QWERTY/
Suffice to say that these early competitions were held using Remington and Caligraph typewriters, and the idea seemed to be more about testing the machines than the men and women who used them. Caligraph fared well, though this strongly-worded Remington advertisement suggests otherwise:
And this is exactly what the marketing people at Remington were referring to (these facsimiles come from Remington's Phonographic World, November 1888 edition, to make the point that "the sentence was written correctly by the Caligraph operator only twice, while the Remington operator, in less times, wrote it correctly 49 times ... the intelligent reader [can] judge ... the respective merits of the two performances".) Osborne on a Caligraph is on the left, Orr on a Remington on the right:

Later, Fay-Sholes (below) claimed to be the choice of champions, as outlined in a previous post:
For another thing, there is also a lot of detail in the chapter titled “Race Against Time” in Bruce Bliven Jr’s 1954 book The Wonderful Writing Machine. As Bliven himself says, “Speed typing had been rather informal between 1888 and 1905, with lots of challenge matches and lots of exhibitions, but no satisfactory clear-cut national championships to settle the conflicting boasts of various contenders.”
Bliven dates the start of “formal” competition to the 1906 presentation by Office Applications magazine of a suitable trophy.
Thus, on the official honours list of World Typewriting Championships, the first winner, in 1906, was Rose L. Fritz.
This is an example of Miss Fritz's work, from 1916, long after she had ceased to be world champion. This test produced 118 words a minute over 15 minutes, without error, according to Charles Vonley Oden's Evolution of the Typewriter (1917):
Fritz (above) travelled to London for an event and it was claimed, “After Rose won the contest, the Prince of Wales came by and asked to watch her type. She typed a letter of 113 words for him in under a minute with no errors. It is reported he was very impressed with her skill.” Fritz was world champion for four years, until 1909.
The lists of professional world champions from 1906 to 1930 are:
The championships were for many years organised by J.N.Kimball (below), who wrote the texts from which competitors typed.
Underwood dominated.
Fritz was succeeded as world champion in 1910-11 by H. Otis Blaisdell. Again, there is an Australian angle here, for Blaisdell toured Australia in December 1919, giving demonstrations around the country of “high speed [and accurate]typewriting”. His trip Down Under was sponsored by the typewriter-importing and business school company of Stott and Hoare (which later became Stott and Underwood; Stott still runs typing schools in Australia).
Florence W.Wilson became the third world champion, winning in 1912.
In 1913, Margaret B. Owen, of New York City, above, won the first of her four world titles – she won three consecutive championships from 1915-17. On October 21, 1918, Owen established a world typing record of 170 words per minute, but seemingly this rate was not sustained over the usual test period of one full hour. It was possibly for no more than five minutes.
Emil Anton Trefzger (above) won his one world title in 1914, breaking Owen’s sequence of championships. Trefzger was born in Peoria, Illinois, on March 18, 1888, and died on April 19, 1961. He was runner-up to Fritz in 1908, but his 86 net words a minute for one hour were to that time a record for a Remington. Switching to Underwood, Trefzger soon lifted his speed to 116. He was fourth behind Blaisdell in 1911 and second to Wilson in 1912.
Trefzger travelled the world representing Underwood – going to Germany and Britain, where he won three consecutive English titles. He moved into management with Underwood, worked in San Francisco and London, and became vice-president of Underwood at their international headquarters in New York.
Remington did provide the typewriter for the world amateur champion in 1916, when Hortense S. Stollnitz (above) took the title and set an amateur record of 137 words a minute net, 146.7 gross, for one half hour. Her machine was described as a “Self-Starting Remington”.
In 1923, Birdie Reeve, at 16, set a world record of 29,000 strokes an hour using two fingers on each hand, spread out in a V formation.
She was billed in vaudeville acts as the “world’s fastest typist” and was said to have a vocabulary of 64,000 words.
Birdie Reeve Kay (above) was born in Chicago on January 16, 1907. She reached speeds of more than 200 words, or 800 letters, a minute, with a typing method devised by her father Thomas Reeve. In her act, she would pass the perfectly typed pages out to the audience to be inspected. For her finish she put a piece of tin in her typewriter and imitated a drum roll or the clackety-clack of a train picking up speed.
She explained that she achieved her speed by “studying words and not the typewriter”, classifying words by their endings. Reeve wrote several books on words and was also a brilliantly gifted chess player.
She later owned and operated a stenography business in Hyde Park, Chicago, and typed many theses for students at the University of Chicago. She died on May 31, 1996.
Owen’s reign as world professional champion was ended by the emergence of the great George L.Hossfeld (sometimes incorrectly spelled "Hossfield") in 1918.
But his series of title wins was interrupted in 1919 by William H.Oswald (above, note the VERY young Albert Tangora),who was to be the best man at the 1926 wedding of arguably the most famous speed typist of them all, Albert Tangora. 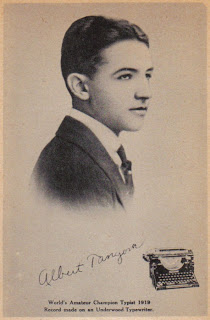 Described as a man with “dazzling hands”, Tangora set a world speed record for sustained typing on a manual keyboard for one hour at 147 words a minute on October 22, 1923. After a rest period, he typed 159 words in a one minute “sprint”. The machine was an Underwood Standard keyboard. His record over the one-hour period has never been surpassed on a manual typewriter.
Tangora's record in the world championships was 141 words a minute, set in 1937. In all he won the competition seven times, and was finally beaten by a typist using an electric machine. Tangora lived in Paterson, New Jersey and later moved to Evanston, Illinois. He died on April 7, 1978. 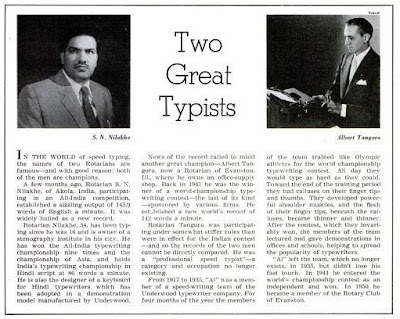 There is a silent video of Tangora in action at http://www.criticalpast.com/video/65675058989_Albert-Tangora_typing-competition_winning-trophy_girls-at-typewriters
In 1930, England produced a champion (see European titles list above) in Eleanor Mitchell, seen here typing blindfolded in a demonstration in a London store.
Mitchell came from a Lancashire travelling-fair family but went to a secretarial college. She emerged as the “Fastest Typist in Europe”, trained by typing the alphabet backwards and forwards 24,000 times and had an audience with King George VI.
By the mid-1930s, electric typewriters were beginning to bring an end to the era of the great manual operators. Margaret Hamma is seen above typing against the clock in New York in 1936. In 1941, Hanna typed at 149 words a minute for one hour, which remains a world record for an electric typewriter. 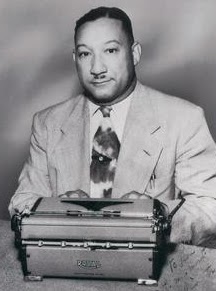 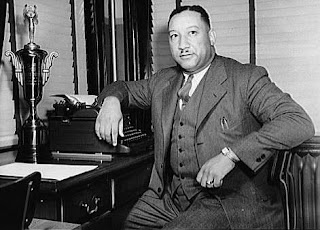 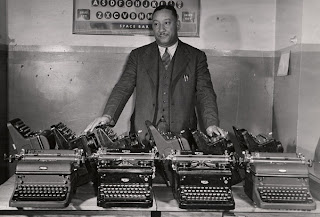 Perhaps the last great world manual typewriter champion was Cortez Wilson Peters, who reached speeds of 180 words a minute over periods of up to 12 minutes, or 15 key strokes a second. Peters was born in Maryland on December 23, 1906. He operated business schools in Washington DC, Chicago and Baltimore and appeared on television shows such as What's my Line? and Ripley's Believe it or Not (on which he typed 100 flawless words a minute while outdoors in subfreezing temperatures and wearing fingerless mittens).
Peters died in Washington on December 1, 1964. His son Cortez W. Peters Jr became world champion after him.
For those not too bound down by political correctness (remember, it was written in the idiom of the time), there's a highly colourful Time magazine report of the 1936 world championships in Chicago, featuring Peters, Norman Saksvig and Tangora at http://www.time.com/time/magazine/article/0,9171,847835,00.html

These are some other typing champions. The name of first lady I'm afraid I've mislaid, but she seems none too happy with her trophy. I've also sadly lost the name of the second, somewhat happier if still slightly bemused champion. The third image is of Saksvig, the Smith-Corona claimant as world champion. 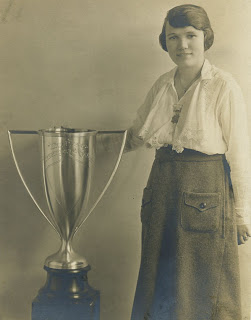 Finally, for your entertainment, there is a short video of the 1959 world championship in Vienna at http://www.youtube.com/watch?v=WDudoGCj7Uc 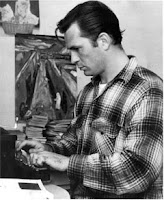 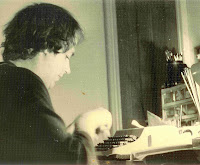 Fastest typing on an electric typewriter: Margaret Hamma, US, 1941, 149 words a minute for one hour; IBM. 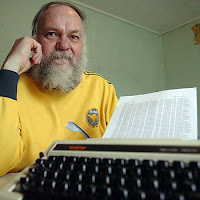 Amazing stuff. Good for you for unearthing the movie of Tangora! He seems to type faster than I can read. And balancing a glass of water on his hand??

The name of the man, who competed with Frank Edward McGurrin, was Louis Traub, not Taub. Please read my blog for detail.

Cortez W. Peters actually appeared on "I've Got A Secret", a show similar to "What's My Line?" by the same producers, Goodson & Todman. His secret was, of course, that he was the world's fastest typist. He gave a demonstration of his skill.It's possible he also appeared on What's My Line? though I'm not aware of it. I actually have a video of his appearance on I've Got a Secret and can post it on YouTube (if I can find it!).

RRaquello,
I would like to see your Cortez W. Peters, "I've Got A Secret" video. Please advise if you were able to find it and post it. Thank you.

You can see Hossfeld in action on this news film and hear him at the end: http://mirc.sc.edu/islandora/object/usc%3A29906

I am ProfessionalTypist. I can type 70 words per minute. Now i am selling my services on Fiverr just for $5.