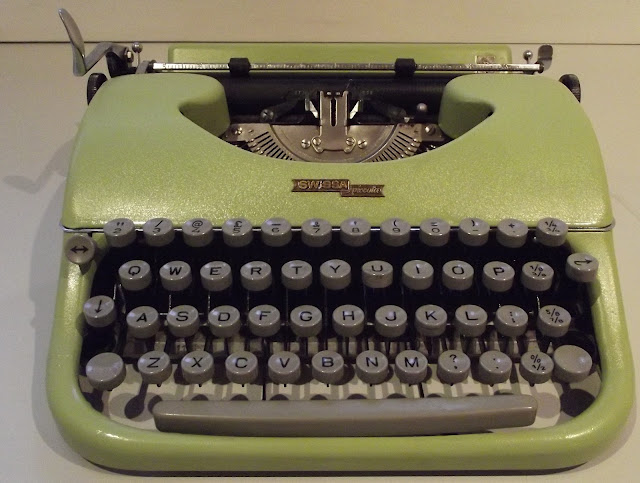 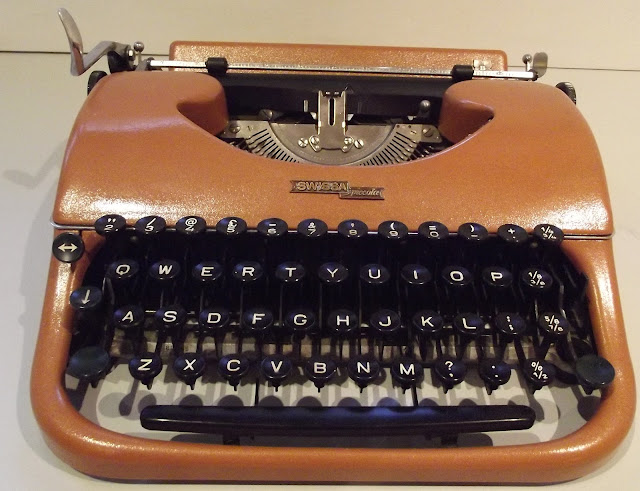 In his later life, the great Swiss architect, designer and artist Max Bill loved to use bright yet subtle colours. Take, for example, his 1975 lithograph for the cover of San Lazzaro: 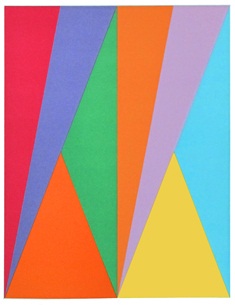 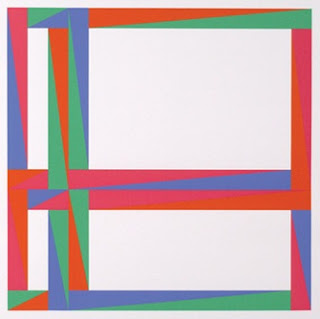 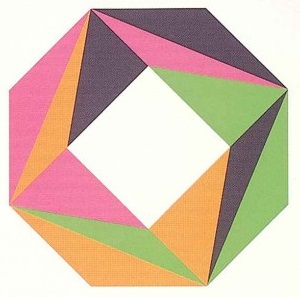 It seems such a pity then, that Bill’s one typewriter design, for what started life as the Swiss Piccola portable, should appear – in most of its incarnations – to be so bland. 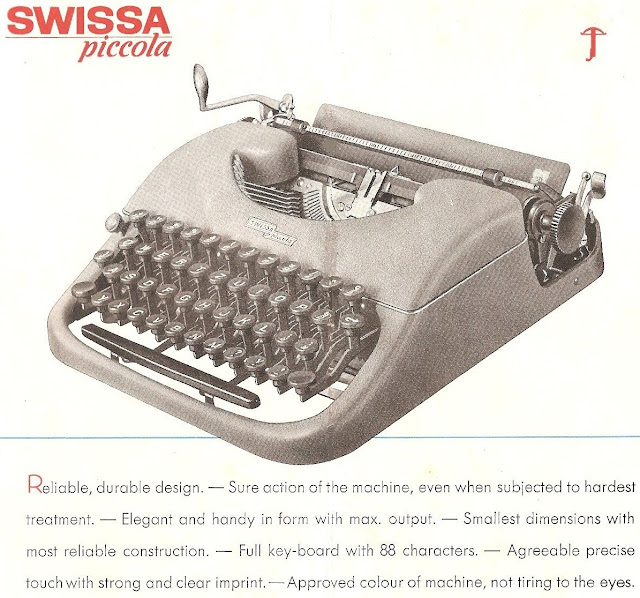 The Piccola brochure says, “Approved colour of machine [grey], not tiring to the eyes”. What a weak claim! Clearly needed, instead, is the sting of mustard, or the soothing feel of pistachio. Grey not tiring? It puts one to sleep with its boredom! 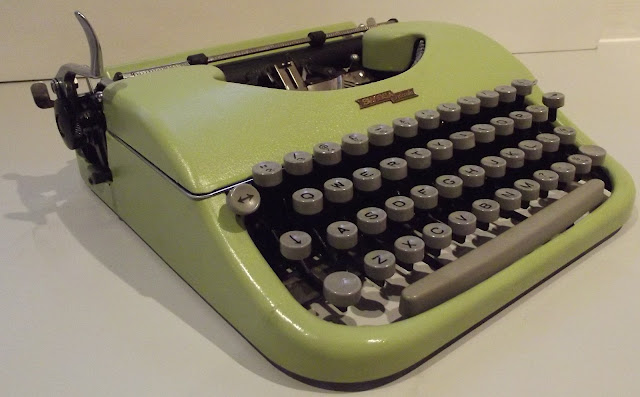 Apart from the Swissa Piccola itself, the Bill typewriter was also made in Britain as the Oliver, in France as the Japy, in Spain as the Patria and the Amaya, and in Germany as the Voss Privat. 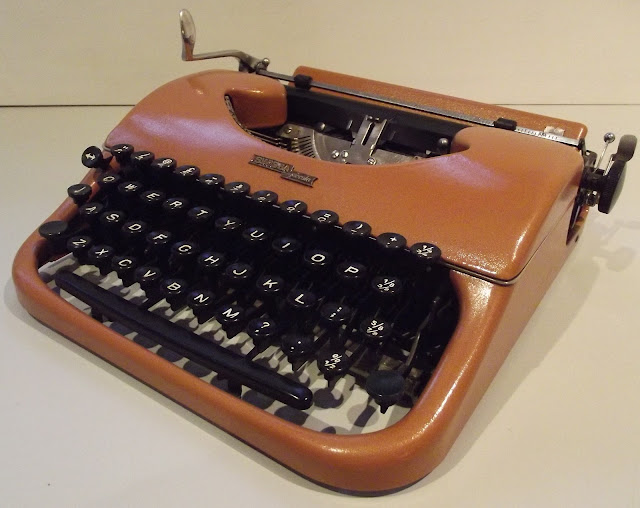 The Swissa Piccola and the Oliver appear predominately in a dull, lifeless grey colour – what was it about the Swiss and the British with their grey paint on either side of World War II? At least another Swiss company, Hermes, saw the light in the early 1950s and started producing typewriters in a more pleasing “hospital green”. 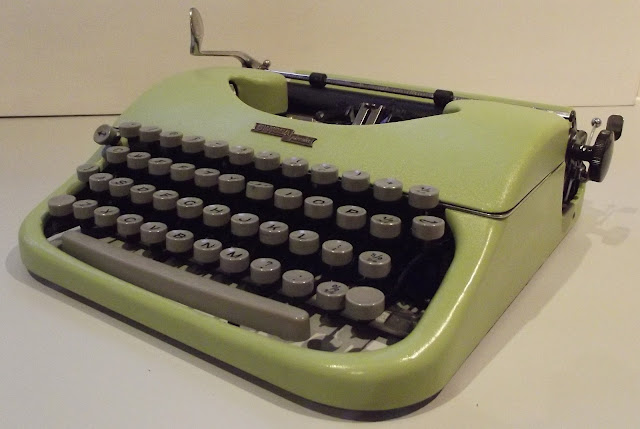 The Oliver, Japy and Amaya all began to appear with a metallic blue ribbon spool cover, but invariably a grey base. Easily the most appealing to the eye is the Voss, with a rich cream top and blue bottom. Less common variations from the various brands can be seen in a comprehensive study of the Patria family in the March 2010 ETCetera (No 89). 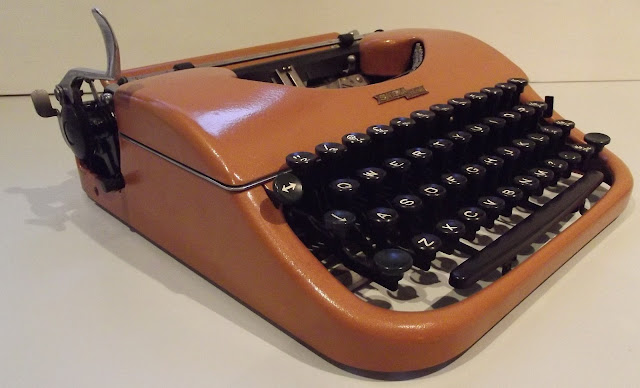 Max Bill’s approach to the design of everyday items such as typewriters was expressed in his quotation: "The difference between the design problems which have to be solved every day and works of painting and sculpture is merely one of degree, not one of principle."

I’ve elected to ignore principles, to do some painting and thus present something to honour Max Bill, by giving my two Swissa Piccolas a fresh complexion. 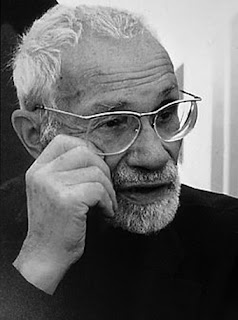 Bill's design philosophy was a flawless blend of form and content, “a true moment of clarity”. My Swissa Piccolas were screaming out to be dragged from the drabness of grey, to be given that clarity. 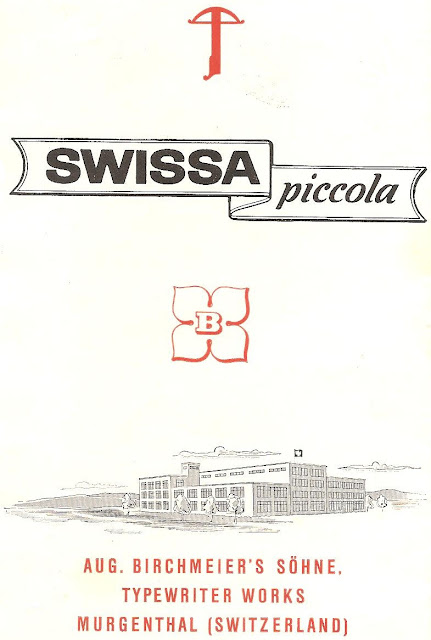 From this we gather the company was founded by August Birchmeier in Murgenthal in Switzerland in 1908. Birchmeier died in 1922 and his widow took over the running of the organisation. Then in 1935 the Birchmeiers’ sons gained control.

At this time the Birchmeiers began to produce a small typewriter at Pieterlen, near Biel, Switzerland. Georg dates the start of the family which Will Davis labelled the “Euro Portable” from here. The Swiss Patria typewriter was, Georg says, the original model for a whole range of European-produced machines. These include the Japy, Oliver, Byron, Patria, Amaya and Voss Privat.

The original work apparently came from Carl Winterling of the ArCHO typewriter company, based on the ideas of engineer Otto Haas for a “briefcase typewriter”. Haas set out to produce “a portable typewriter of the smallest height and most compact construction … 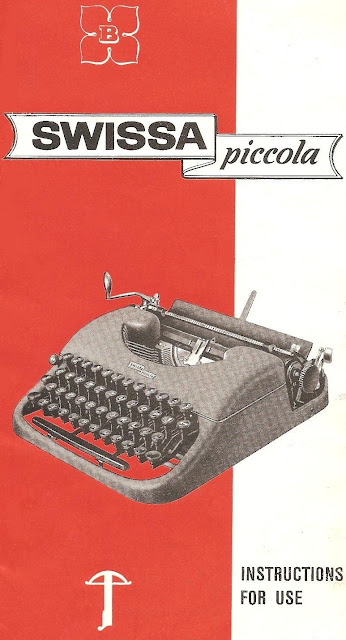 “The efforts which have so far been made by manufacturers with a view of constructing portable typewriters have more and more lost sight of the underlying principles that ensure proper portability and in fact have rather followed the opposite way in attempts [to  accommodate] the several parts [present in] large office typewriters.

“ … the [portable] typewriter has thus essentially lost its value, and its weight as well as its price has been steadily increased; so that the ‘portables’ of the present day [no longer] serve the purpose for which they had originally been intended …" 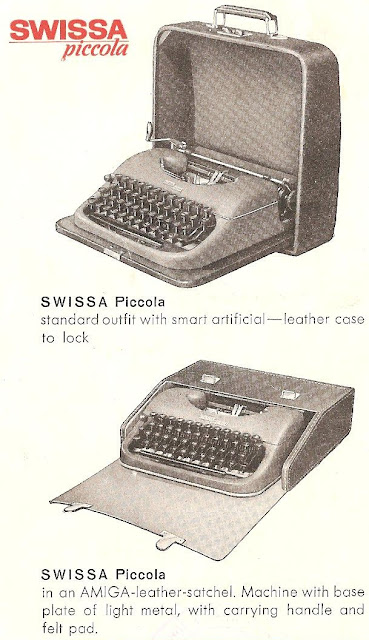 In 1944, the Birchmeiers acquired a new, stylish outer casing design for what was mechanically the same typewriter. The design came from Max Bill. The Bill Swissa Piccola portables were first produced in 1950, and the factory remained operational for another 30 years. 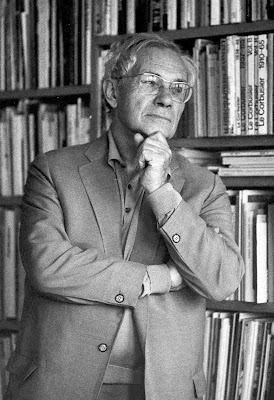 Max Bill was born in Winterthur on December 22, 1908, and died during a visit to Berlin on December 9, 1994, just short of his 86th birthday. He served an apprenticeship as a silversmith from 1924-27, then studied at the Bauhaus in Dessau from 1927-29, after which he moved to Zurich. From 1937 onwards he was a prime mover behind the Allianz group of Swiss artists and in 1944, became a professor at the school of arts in Zurich. 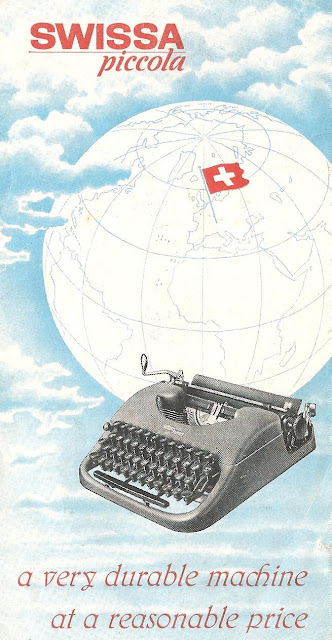 In 1953, Bill, Inge Aicher-Scholl and Otl Aicher founded the Ulm School of Design in Ulm, Germany, a design school initially created in the tradition of the Bauhaus and which later developed a new design education approach integrating art and science. The school is notable for its inclusion of semiotics as a field of study. The school closed in 1968. 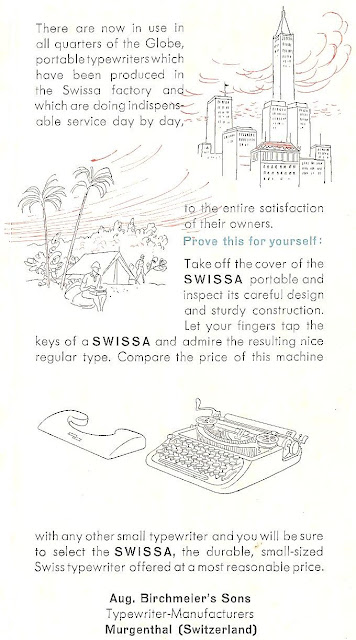 Bill was the single most decisive influence on Swiss graphic design, beginning in the 1950s with his theoretical writing and progressive work. His connection to the days of the Modern Movement gave him special authority. As an industrial designer, his work is characterised by a clarity of design and precise proportions. He sought to create objects so that the new science of form could be experienced by the senses. 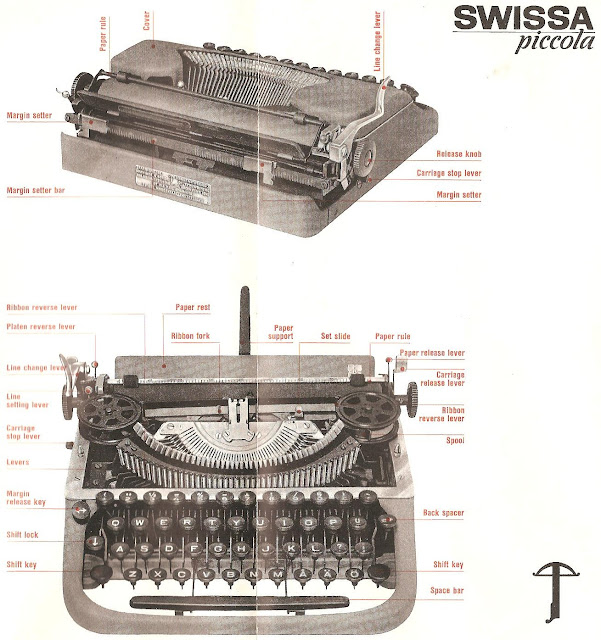 Bill is said to have “achieved mastery in many areas: avant-garde architecture, the fine arts, product design, typography, journalism, research and teaching and even politics. He was a true 'uomo universale' [an Italian term for polymath, a person whose expertise spans a significant number of different subject areas] who represented the concept of 'concrete art' by creating works 'by means of its intrinsic nature and rules', and a lifelong proponent of Die Gute Form (good design).” 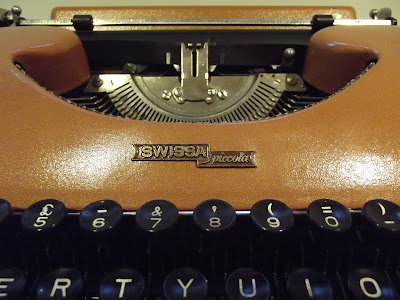 He taught that industrial design is closely linked to social and political responsibility and must not be influenced by considerations of profit. Bill regarded himself as a product designer, entirely in the service of the public. 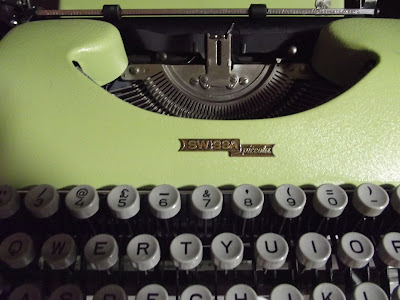 His output ranged from jewellery designs, a shaving brush, a mirror and hairbrush set, a wash stand, the aluminium handle for a piece of kitchen furniture, crockery for Hutschenreuther and the legendary Junghans kitchen clock. As one can see from this image, the clock looks so much better in a pleasant colour. 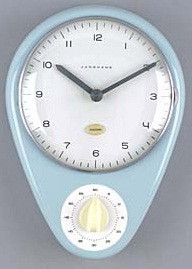 So, too, I think, my Swissa Piccola typewriters: 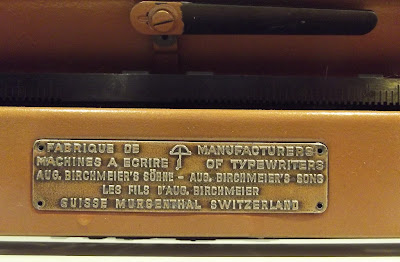 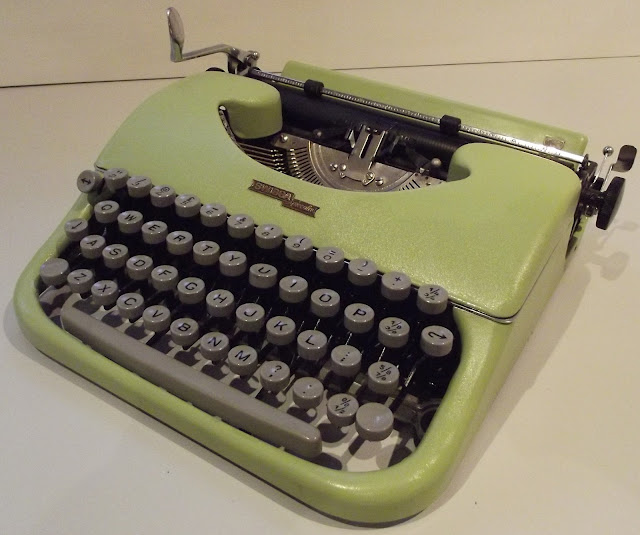 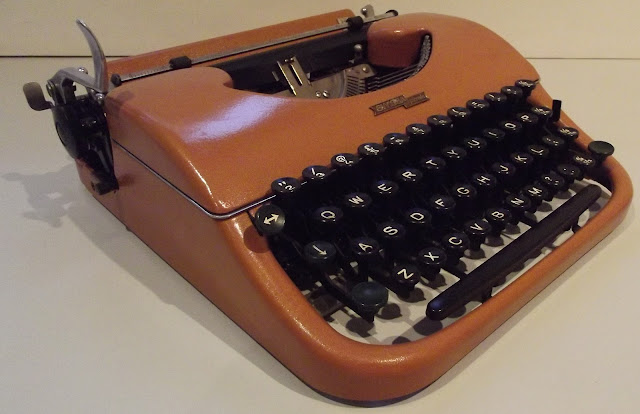 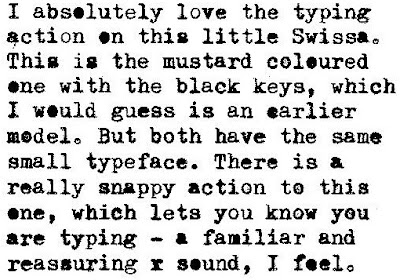 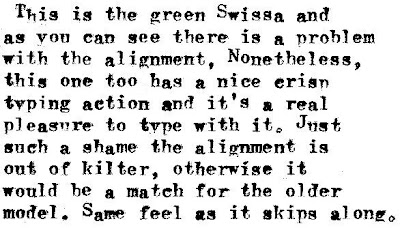 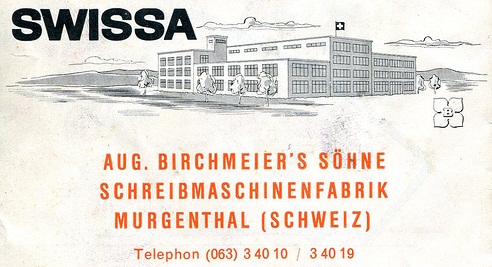 Posted by Robert Messenger at 23:46

Excellent article, although I have to add that it wasn't the Birchmeier corporation that designed the Swissa Piccola, but it was invented by Otto Haas for the swiss PATRIA corporation, which licensed (?) the production of typewriters (already in the Bill design) to Birchmeier's Sons shortly after World War II. They continued to produce the same typewriters under the new brand name Swissa.

I had never heard of the Amiga case/base version.

I like the colors. Nice job. Thanks for a very interesting article and all the fine details.

PS Very nice paint job! How did you do it?

OMG, I didn't remember my comments of two months ago - so I will leave a third one:
By now, I have knowledge of an original red and green Swissa piccola.
Production of this design started in 1945 still under the brand name "Patria", then continued - mechanically unchanged - as "Swissa piccola" from 1950.
I keep discovering more variants of this European family, which really should be called a typewriter CLAN.

Would you happen to have seen a PDF of the Instructions for Use for this machine?
Even better... a hard copy for sale in the wild?

An enjoyable article as always everytime I happen to "stumble" across your excellent website. Yes strange that a colourful artist like Max Bill ended up with mainly grey colour on such an elegant typewriter design. I happen to have the original red version - tho with grey keys....
I think the story and"mystery"around my red Swissa Piccola back in 2007 was one of the main reasons i became fascinated of typewriters at the time. It was so much to "investigate"; the beautiful organic timeless design where did that came from? And the origin of the snappy swiss "clockwork"? And not to forget the fascinating story and work of a genius of a multi-artist Max Bill! ...Which I'd never heard of before! I was hooked! :) I leave a link to some photos of a happy "family reunion"! https://www.flickr.com/gp/jts66/Z262x5