Rexina's Mystery: The Typewriter That Goes Clunk Instead of Clack 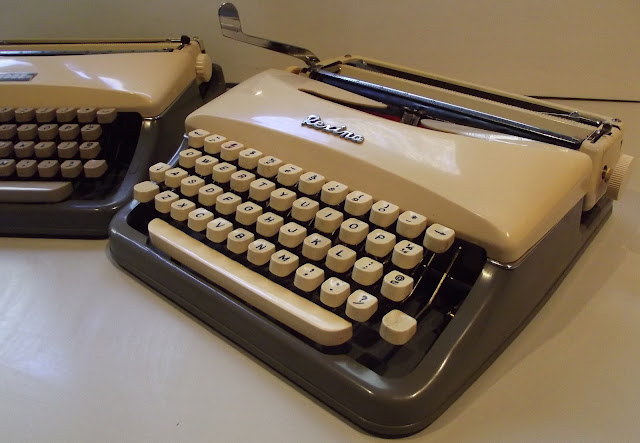 When Adwoa alerted us on Google+ to the Rexina portable typewriter listing on British eBay, and Richard Polt quickly confirmed she was the identical twin sister of my Condor Nippo and Richard's Baby Alpina Nippo, I just couldn't resist buying her.
Adwoa and Richard facilitated my purchase of the Condor in the US, with Richard getting the chance to take a close look at it and compare it with his Baby Alpina before posting it onto me.
The Rexina arrived last night from a very helpful buyer in Cross Keys, outside Newport (and not far from Underwood) in Wales, where many moons ago I once played in a bruising rugby match. 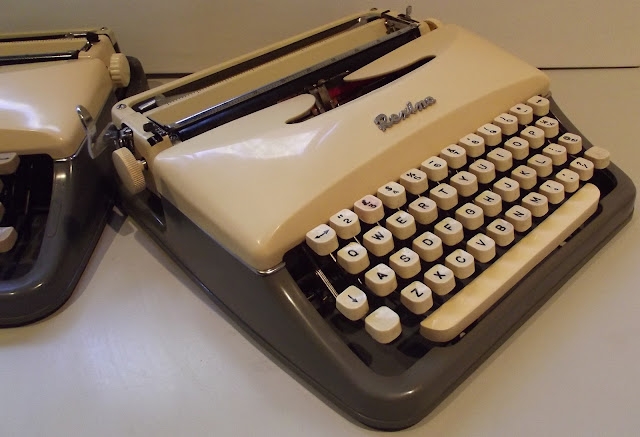 Yet, as one can see from the two short videos on this post, the Rexina remains a mystery typewriter. With her ribbon spool cover on, she won't type. With the cover off, she types perfectly. 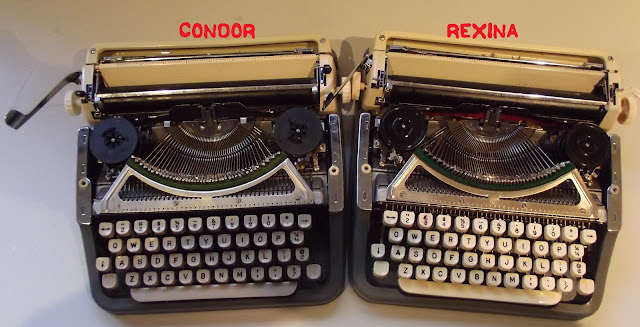 For the life of me, I can only see one difference between her and her brother the Condor: on the Condor, there are two metal prop bars on top of the segment, either side of the ribbon vibrator and printing point, upon which the front inner lips of the Condor's ribbon cover sit. With these missing (where they ever there?) on the Rexina, the ribbon cover sits too low for the typebars to clear its back edge. Thus a clunk-clunk-clunk of the typebars hitting the underneath of the ribbon cover instead the clickety-clack of them striking the paper on the platen! 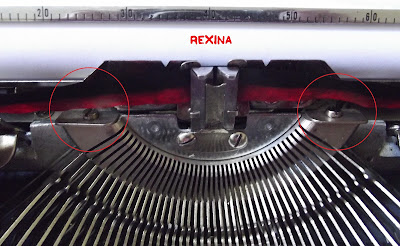 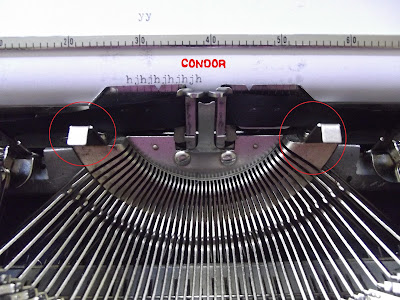 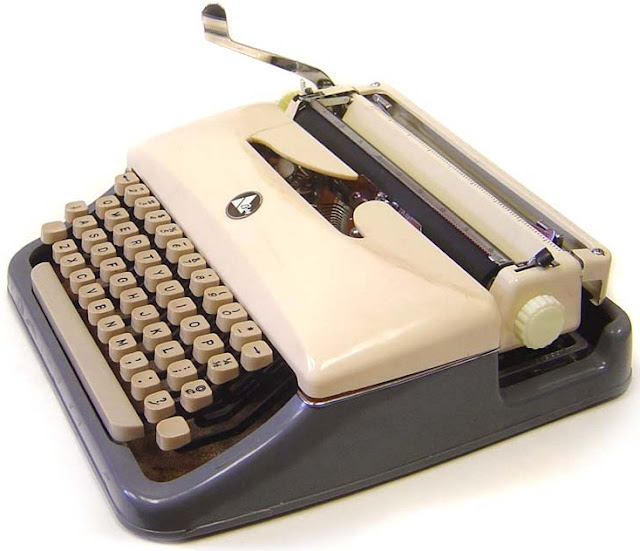 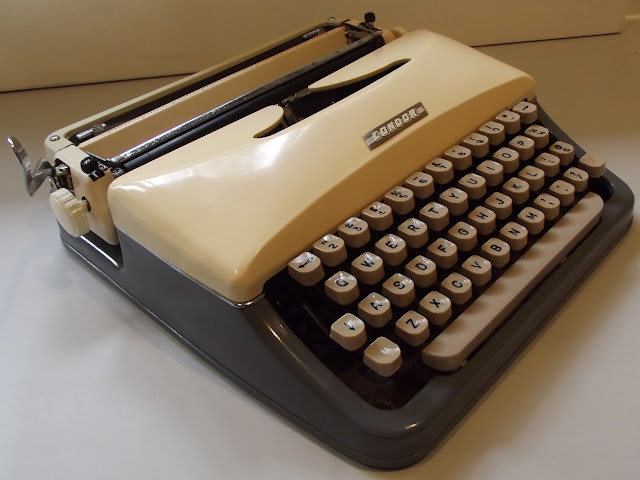 My Condor
Given this, was a design fault found in the earlier model Rexina which was rectified on the later model Condor, by the addition of the two bars?
In my efforts to unravel this mystery, I stripped both machines down and found there were other, albeit very minor, differences in the design. While doing this, I also discovered a ribbon vibrator spring missing, which I replaced (circled in red). This didn't overcome Rexina's problem. However, just looking at these images again now, I wonder if the absence of rubber rings on the frame of  Rexina is the cause of her problem? 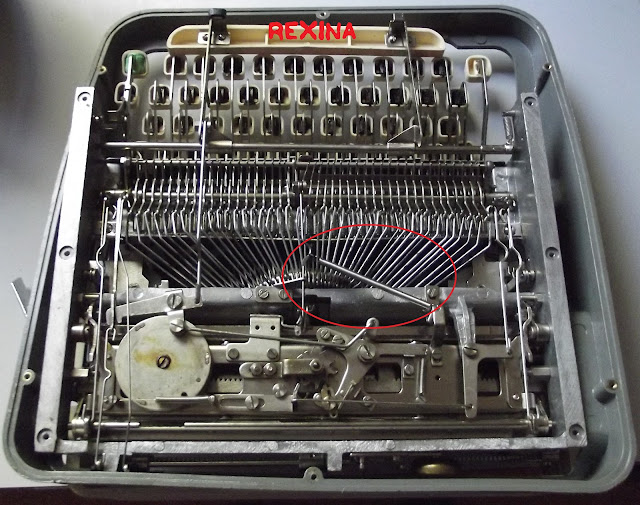 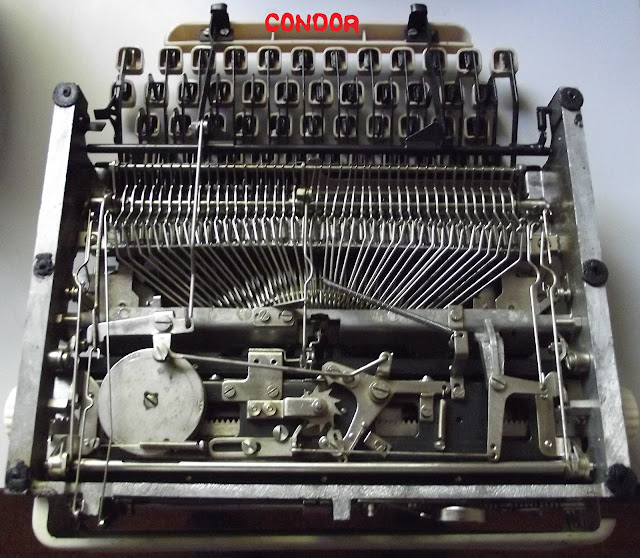 As an added mystery, the handbook which came with the Rexina shows a completely different ribbon cover, a flat cover with a collar, or raised lip,  around the typebasket. 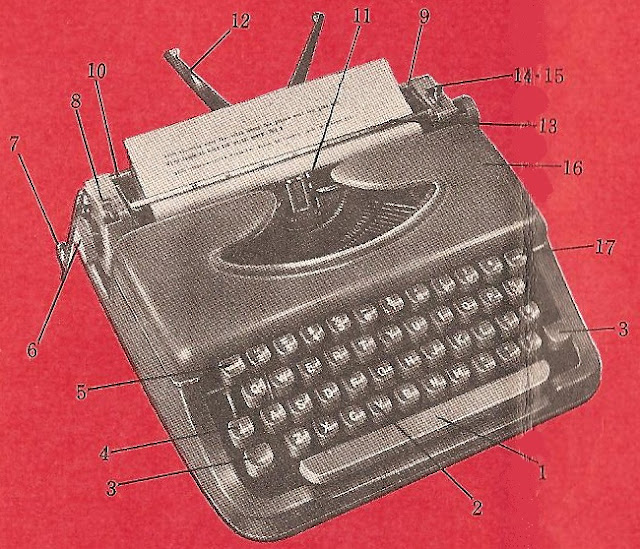 Indeed, this looks more like the one on the Alba four-bank that I bought from a French seller yesterday. Richard Polt had alerted Georg Sommeregger and I do this Etsy item because Richard knew  Georg and I both had the Alba three-bank, a toy typewriter which looks and works like the real thing. The four-bank seems to be a more serious move toward a real typewriter. 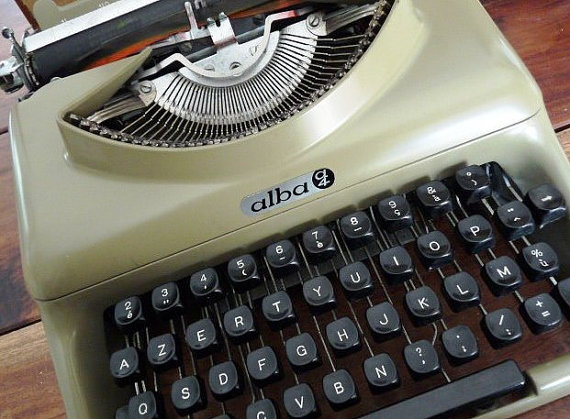 But back to the Rexina-Condor. The Condor handbook shows the ribbon cover on this model as it actually is: 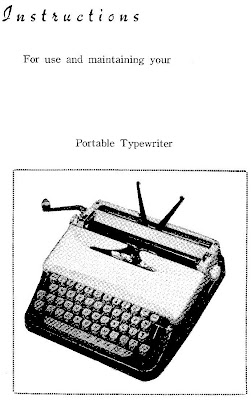 If anyone can suggest a way of overcoming Rexina's problem, other than somehow propping up the ribbon cover at the front, I'd like to hear from them. Has anyone else ever encountered anything like this? 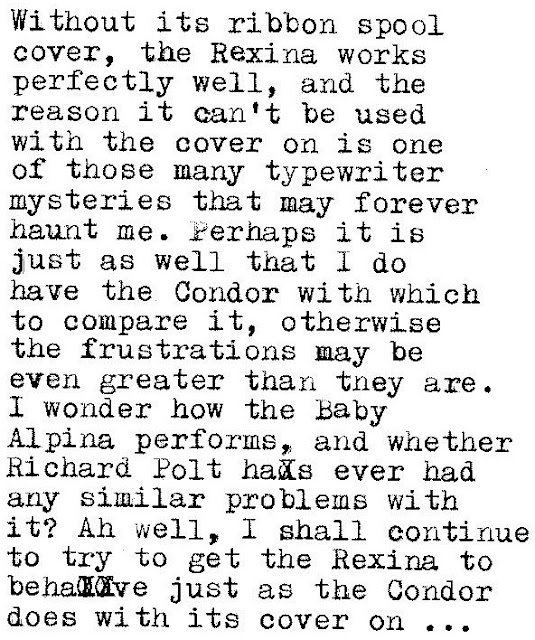 By the way, I'm informed Rexina is derived from Old Persian origins. It's a derivative of the English name Rexanne. "Rexina is seldom used as a baby name for girls. It is not in the top 1000 names." Nor is it in the Top 1000 Typewriters, I might add!

Beautiful machine, congratulations! Doesn't it remind me of the old police song "Roxanne... You don't have to put on the red light" + she was the wife of Alexander the Great.

Hmmm... I'm not convinced it is so clear cut. This unit would have been functioning when it went on sale, so I any improvements to the design that would have stopped this from happening, would have been compensating for an inherent weakness which would cause something to collapse and buckle over time.

To that end, I'd look at the ribbon cover first. The tolerances are so fine on such typewriter designs, that even half a millimetre of warping would potentially cause issues.

It's a convex structure, and would be strong. So the inference would be that the inference is that the weakness could be at the base. Can't see any spreading in the photos around the edge, that's any different between them, so.... maybe not.

Those clips. Have you tried putting them on the other unit? I'm assuming this unit is carriage shift. I'm wondering if in these units the basket has tension behind it that causes it to shift just a few millimetres. Looking at the type-slugs on the Rexina, they appear on the photo to be sitting higher.

I'm wondering if the type-bar plate has been shifted. Have those clips been removed? And if so, are those screws that hold everything in place (and they're serious screws, it must be fighting against a level of tension) not tightened to potentially the right torque?

Caveat: I could be wrong about the type-slugs, and I was just fooled by the positioning of the camera and the light. But just a millimetre's shift up at the end (a fraction of a millimetre shift at the plate) would have this result.

It's such fun to share intercontinental mysteries ... I just checked my Alpina Baby and saw that, although it has those metal supports above the segment, the plastic ribbon cover doesn't even touch them. They are there in case of emergencies, I suppose.

I wonder whether the two rubber grommets that the cover's prongs fit into have deteriorated and shrunken so that the prongs are fitting too far into the body of the typewriter and the cover is coming down too low.

I'm sure you'll keep us up to date on that Alba, and on a certain little green East German machine ...

Very interesting, both the typewriter and its problem.

By the way, the ribbon cover on these machines seems to be modeled on the well-known Alpina cover -- to my eye, anyway. But only one Alpina Baby has turned up. Just something else to mull over ...

@ Richard: now on my wish-list.

A fascinating mystery and good looking typers. You all have much more experience than me with typewriters, but my wild conjecture would be that perhaps the cover is not the original. Is it possible someone found a similar one of another rebrand that they thought fit and replaced it??

This is a great example of the entertainment value of even problematic typewriters, and the justification, one might say, for having bot variety and duplicates. Is there any place on the underside of the cover showing abrasion?