The Tradition Typewriter, and Even More Typewriters From Heaven 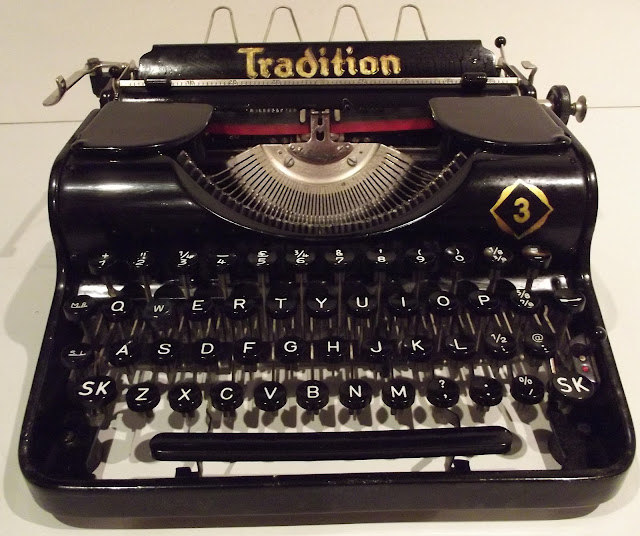 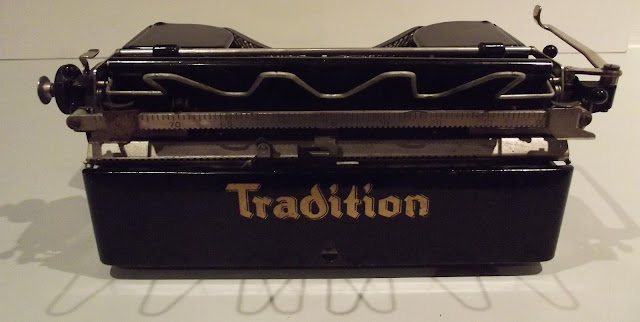 I realise this is starting to seem ridiculous. I can hardly believe it myself. But I received another four typewriters today. That makes 12 in three days, six of them gifted. The downpour ends here, however. Tomorrow is Saturday and I don’t expect to see another addition to the collection until Monday at the earliest (an Erika).
So yet again I have four typewriters to show and I still haven’t had a chance to post on any of them individually. Maybe tomorrow …
As I had mentioned in my two previous "Typewriters From Heaven" posts, my first port of call today was to Forrest to pick up a gift from a reader, what I was told was an “Underwood Imperial”. I was prepared for any surprise, but fully expected it to be an Underwood Universal, and it was: a delightful example of the first typewriter I ever used, back in 1957, aged nine. Naturally, I have a particular fondness for these models. 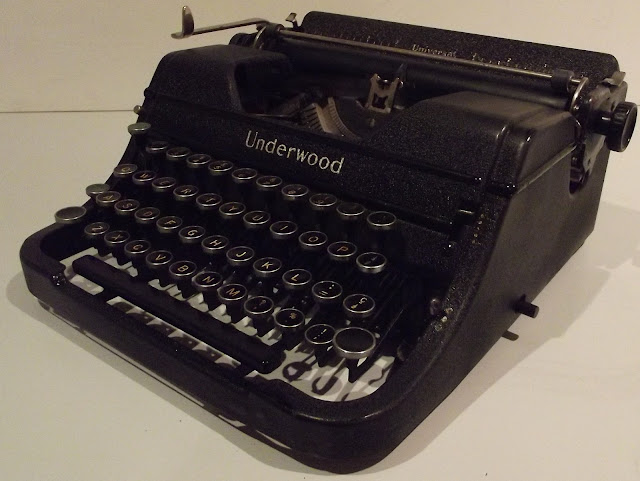 It wasn’t working at first, but as I expected, a degrease and lube quickly brought it back to life, and now, once again, after many years of inaction, it is typing beautifully.
This portable belonged to Angus Conrad McKay, BVSc (Sydney 1925), Canberra’s very first veterinary surgeon. McKay was appointed  in  1926 by  the  Federal Capital Commission and was responsible  for supervising  the  supply  of  meat  and milk  and  for  providing  disease  control  and advice  to  livestock  producers throughout the  territory.
McKay’s son, Dr Bill McKay, showed me the magnificent rolltop typewriter desk at which his father had used the Underwood.  A wooden tray was pulled out from above the drawers on the right side of the desk, on which to place the typewriter.
I went from there to my storage units in Fyshwick to collect my Facit TP1, to compare it with the TP2 for my upcoming post of these two models, and picked up a beautiful old Erika four-bank, a Rheinmetall, an Underwood 5 and a Smith-Corona Silent Super for the exhibition while I was there. 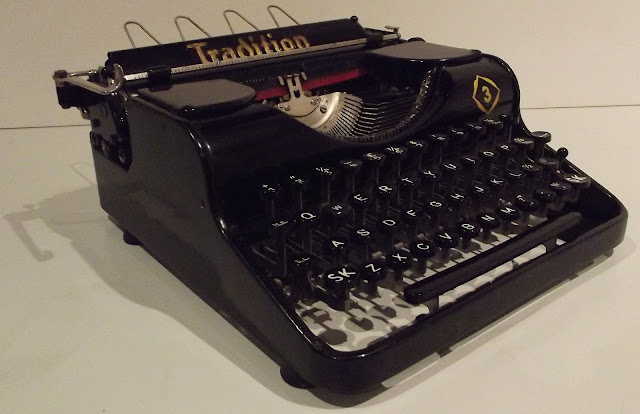 No sooner had I got home than I received an email from another reader, Tom Roberts, telling me he had his father’s Tradition 3 to give me. 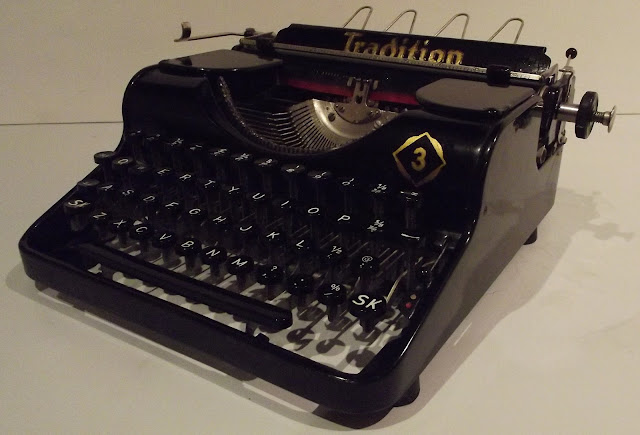 I was so excited by this new mystery, I got straight back in the car and immediately drove over to Reid to collect the Tradition. On the way there, I racked my brain trying think what the “Tradition 3” might be – hardly giving a thought to the possibility that it might be, indeed, a “Tradition 3”. I hadn’t had time to check on the Internet – not that that would have done me much good, because when I checked later, no Tradition typewriter came up. 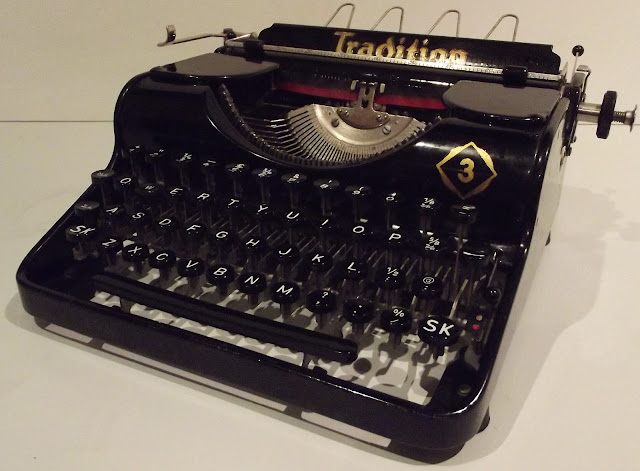 When I got to Tom’s house, and saw his father’s machine was a Tradition 3, I realised straight away it was a rebranded Olympia. 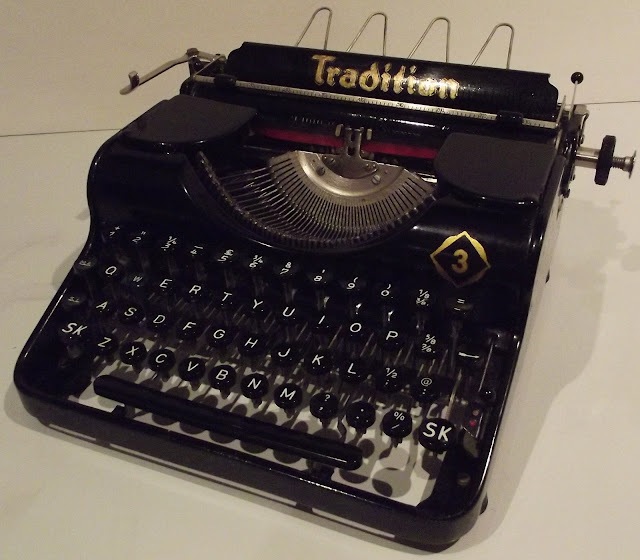 I remembered that many years ago I saw one come up for sale, and asked fellow collectors and typewriter historians about it, to be told it was another name for an early Olympia, perhaps an export version. 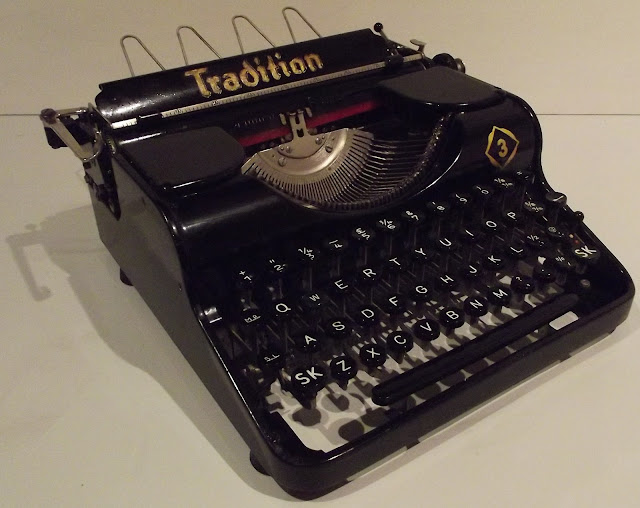 Finally, from among the 12 "new" typewriters I have acquired in the past three days, here was a real "find"! A true rarity. 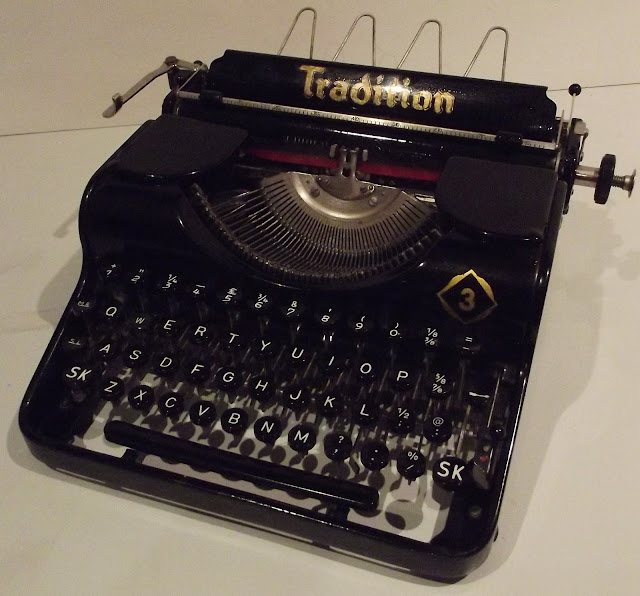 As I was leaving with the Tradition, Tom mentioned he had another typewriter in the shed, which I “may not be interested in”. But I’m interested in all typewriters, so I took a look. It was an Italian-made Olympia Splendid. I included one of these in a post some time ago, when looking at latter-day plastic Chinese and Italian-made typewriters and their unmistakable similarity. 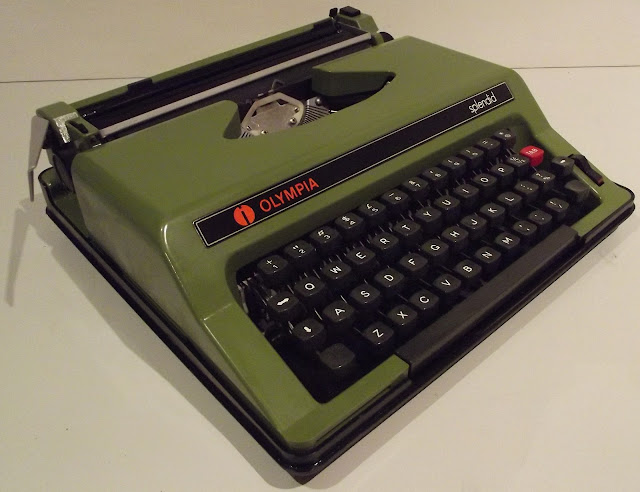 With that I returned to the storage units in Fyshwick and collected an Olympia Simplex and an Olympia SM1, to compare them with the Tradition, and also a red Olympia Splendid 99, one of the original Splendid series (33, 66, 99), to compare with the much later plastic model (no comparison at all, really!).

When I got home and looked at the Tradition beside the Simplex (which was produced with the Elite and the Progress from around 1932-33) and the SM1, it struck me that the Tradition looked as if it could be placed somewhere  between the two. The SM1 first came out in 1949. 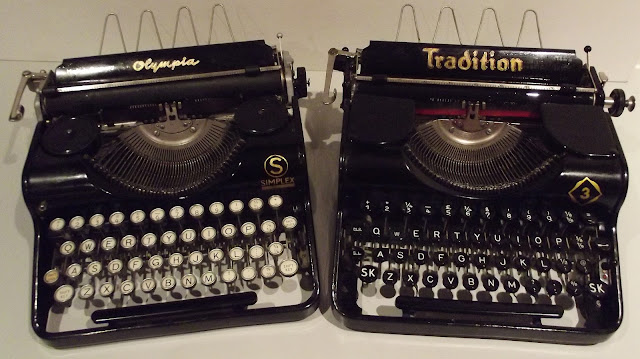 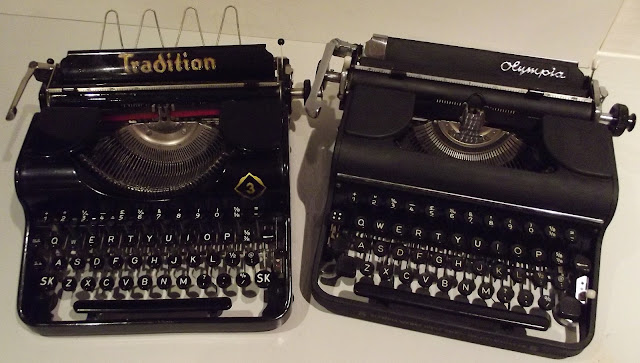 While I was in Fyshwick, a workmate gave me a deep red Consul 231.2 to add to my collection of Czech-made typewriters. A full Consul post is on its way, I promise.
So, all in all, it was yet another day made in typewriter heaven! 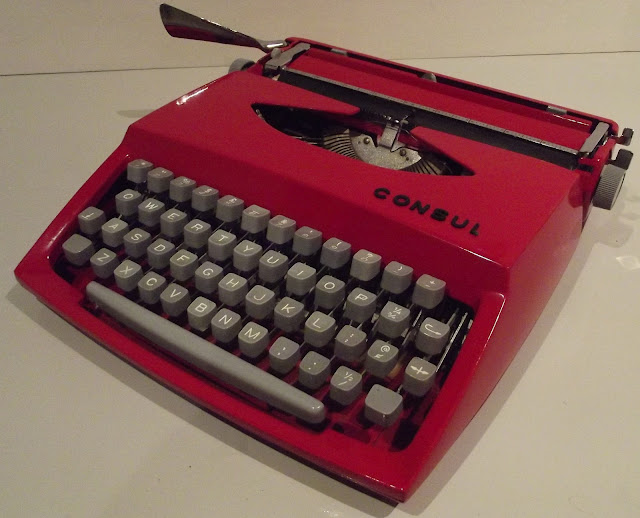 This tool box came with the Tradition. I wonder what the little "corkscrew" device was used for? 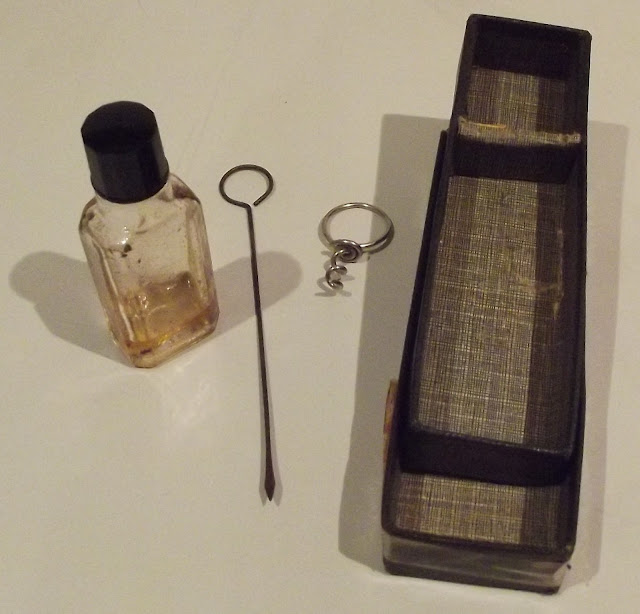 My wife would balk at them coming in groups of four. Also, I can't stop thinking of "fiddler on the Roof" now.

I have never seen or heard of a Tradition before. Great find.

Surely the corkscrew device was to help you open a bottle of wine, so you had a glass on hand for your writing!

On a side note, how nice is it to see my initials on a typewriter. Even if I'm guessing it really just means 'shift key'.