'Better Than Anyone Else': John O'Hara and his Typewriters 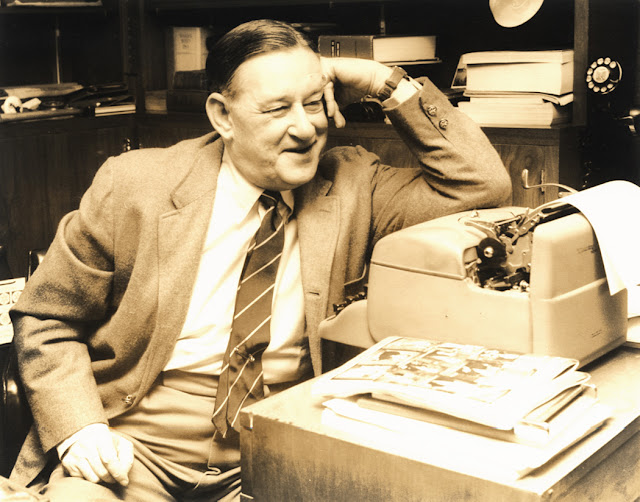 John O'Hara leans on his Remington Rand KMC standard typewriter
On John O’Hara’s gravestone are the words, “Better than anyone else he told the truth about his time. He was a professional. He wrote honestly and well.” O’Hara worded the epitaph himself, but his claims, more or less, originate with Ernest Hemingway’s review of O’Hara’s 1934 debut novel: “If you want to read a book by a man who knows exactly what he is writing about and has written it marvellously well, read Appointment in Samarra.” 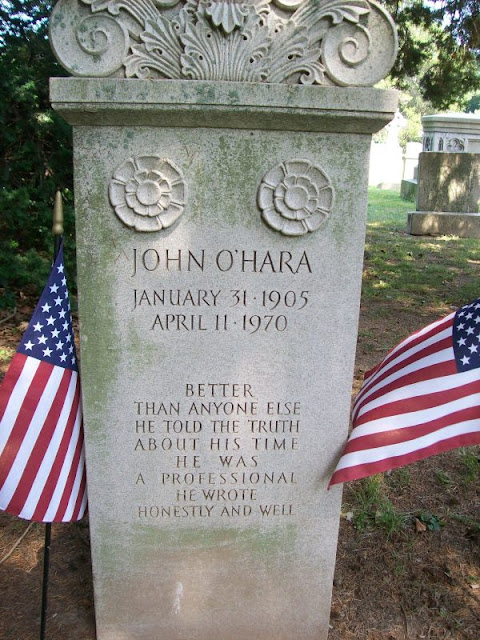 The third and fourth lines on O’Hara gravestone were taken up by The New Yorker, a magazine to which O’Hara contributed more short stories than any other writer (247), in its August 19, 2013, tribute by Lorin Stein, editor of the Paris Review. The headline said, “He told the truth about his time”, and below it was the Review’s 1993 quote from author Fran Lebowitz, “To me, O’Hara is the real Fitzgerald”. 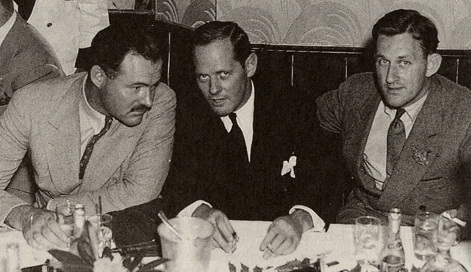 Hemingway and O'Hara with Sherman Billingsley, centre, owner of the Stork Club.
How is it, then, that we know all about Hemingway and O’Hara’s fellow Irish American Scott Fitzgerald, but few of us remember O’Hara, the author of BUtterfield 8 and the epistolary Pal Joey, among 17 novels, as well as novellas, plays, screenplays and more than 400 short stories? After all, he hasn’t even made it on to Richard Polt’s list of Writers and their Typewriters on Richard’s Classic Typewriter Page, and - especially given the number of photos O'Hara had taken at his typewriters - that’s just about as clear an indication of obscurity as there can be.
We look again to The New Yorker for an answer. It once more quoted Lebowitz on the subject. She said O’Hara is underrated “because every single person who knew him hated him”. It’s only a slight exaggeration. 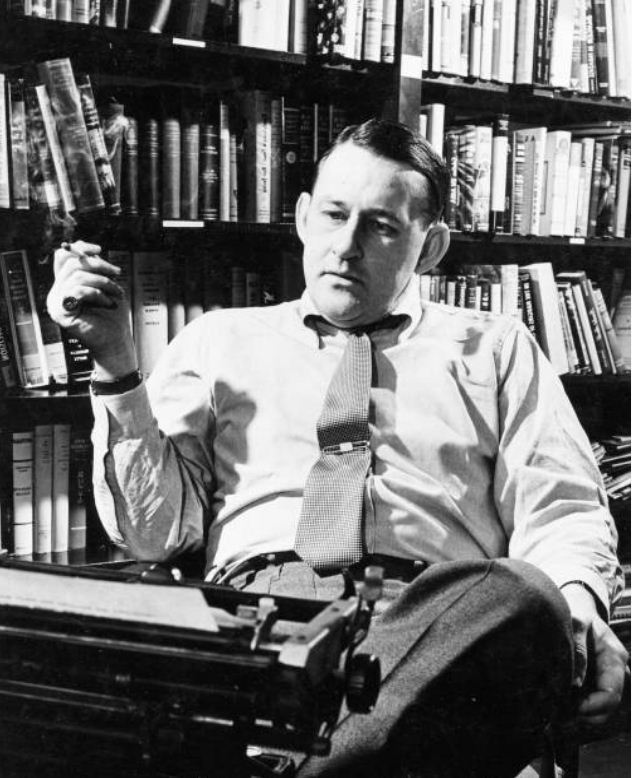 A younger O'Hara at his Underwood 5 standard typewriter
Two years ago London’s Times Literary Supplement described O’Hara as “An influential author ‘hiding in plain sight’. It quoted Lionel Trilling, “a critic hard to please [who] glowingly reviewed one of [O’Hara’s] best story collections, Pipe Night (1945), on the front page of The New York Times Book Review. ‘More than anyone now writing’, Trilling said, ‘O’Hara understands the complex, contradictory, asymmetrical society in which we live.’ Trilling situated him in the line of social novelists such as William Dean Howells, Edith Wharton, Henry James and Proust.” 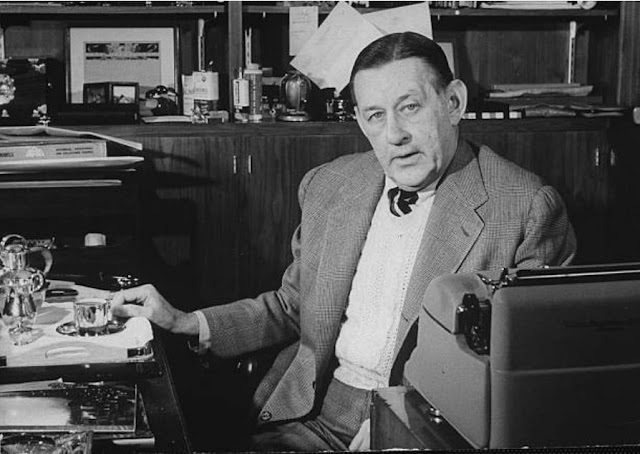 Brendan Gill, who worked with O'Hara at The New Yorker, ranks him “among the greatest short-story writers in English, or in any other language” and credits O’Hara with helping “to invent what the world came to call The New Yorker short story.” But of the gravestone, Gill added, “From the far side of the grave, he remains self-defensive and overbearing. Better than anyone else? Not merely better than any other writer of fiction but better than any dramatist, any poet, any biographer, any historian? It is an astonishing claim.” 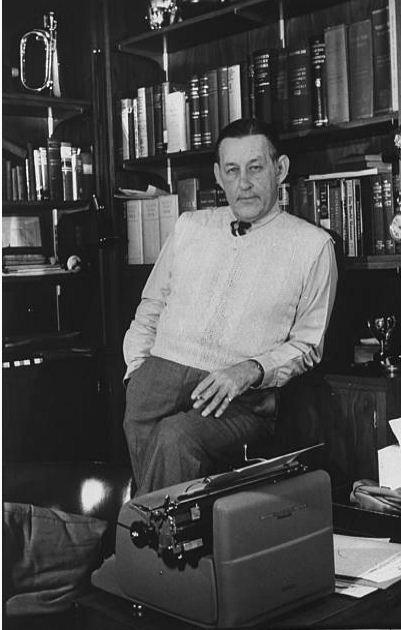 In his introduction to the 2011 volume John O’Hara: Selected Short Stories, E.L. Doctorow wrote, “ … O’Hara practises the classic form of the modern short story developed by Joyce and perfected by Hemingway: the entry point is close in time to the denouement, the setting is circumscribed, and the piece ideally yields some sort of revelation or what Joyce called an epiphany. Writers today have mostly abandoned this right form …” 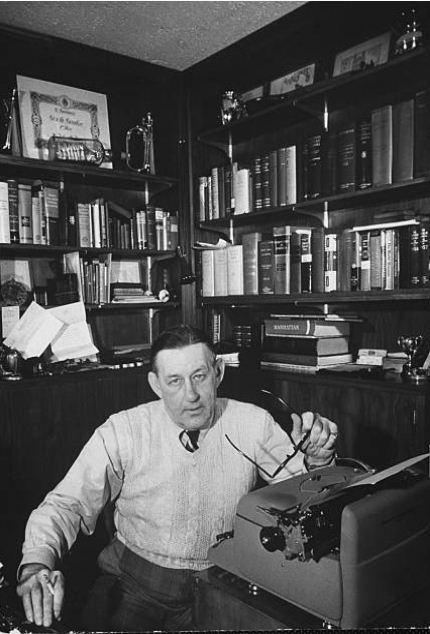 John Henry O'Hara earned his early literary reputation for short stories and became a best-selling writer with Appointment in Samarra, about the downfall of a car dealer in the fictional town of Gibbsville, Pennsylvania. It begins with a scene of a married couple having sex on Christmas morning. O’Hara’s work stands out for its unvarnished realism. Champions, who include John Updike and Shelby Foote, rank him highly among the under appreciated and unjustly neglected major American writers of the 20th century. 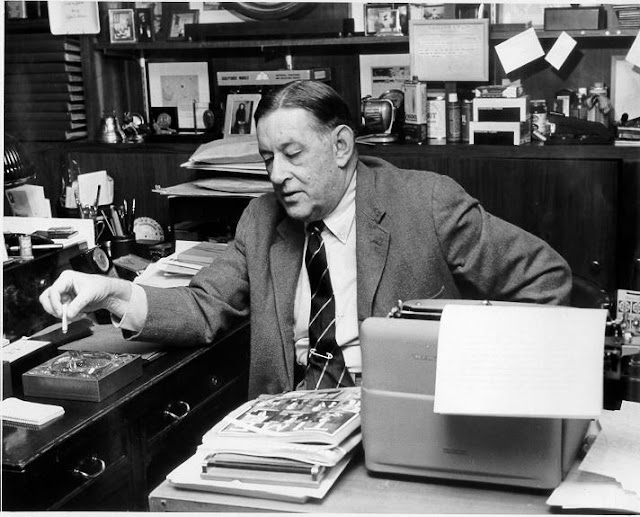 Lorin Stein wrote in 2013, “O’Hara may not have been the best story writer of the 20th century, but he is the most addictive. You can binge on his collections the way some people binge on Mad Men, and for some of the same reasons. On the topics of class, sex, and alcohol - that is, the topics that mattered to him - his novels amount to a secret history of American life.” John Updike said O’Hara “outproduced our capacity for appreciation; maybe now we can settle down and marvel at him all over again.” 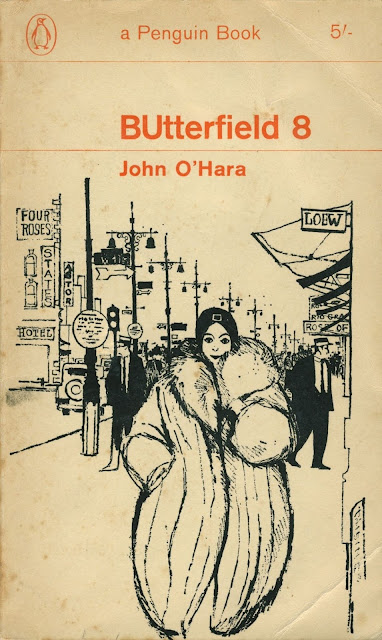 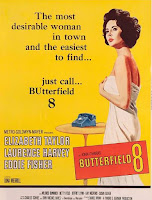 It is for BUtterfield 8 that I am most familiar with O’Hara, and then not so much because of the 1935 book as the 1960 movie starring Elizabeth Taylor (for which Taylor won her first Oscar, as Gloria Wandrous). O’Hara’s novel, in which his alter ego is beat reporter Jimmy Malloy, was his roman à clef, based on the tragic, short life of flapper Starr Faithfull, whose mysterious death in 1931 became a tabloid sensation. Faithfull was a real-life acquaintance of O’Hara’s, a fact which added to the book's feel of authenticity. 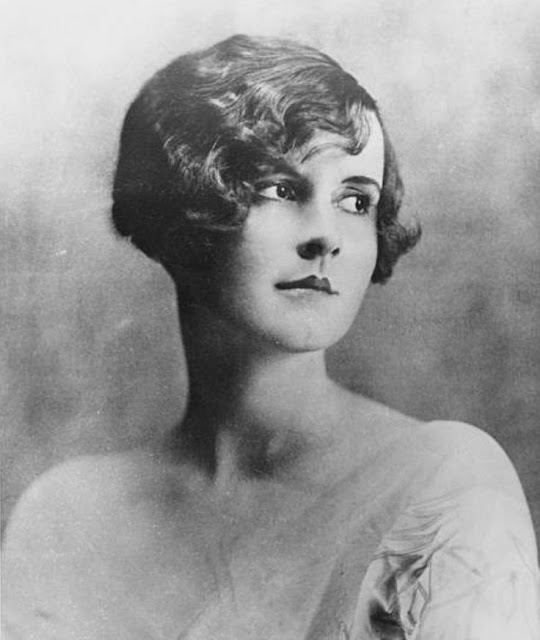 Starr Faithfull (above, born Marian Starr Wyman in 1906) was an American socialite. After she died, newspapers published allegations that she had been sexually abused as a child by Andrew James Peters, a wealthy, prominent politician and former Mayor of Boston, and that he was suspected of murdering her. Investigators unsuccessfully attempted to determine whether her death was a homicide or a suicide, and it remains unsolved. Faithfull was found on the beach at Long Beach, New York, on the morning of June 8, 1931. An autopsy revealed she died by drowning, but she also had many bruises on her body and a large dose of a sedative in her system. Evidence for the investigation included her diary, containing explicit descriptions of her sexual liaisons with 19 different men, including one she called “AJP”, who was thought to be Peters. Time magazine called the story a “sexy death mystery” with a “perfect front-page name”. 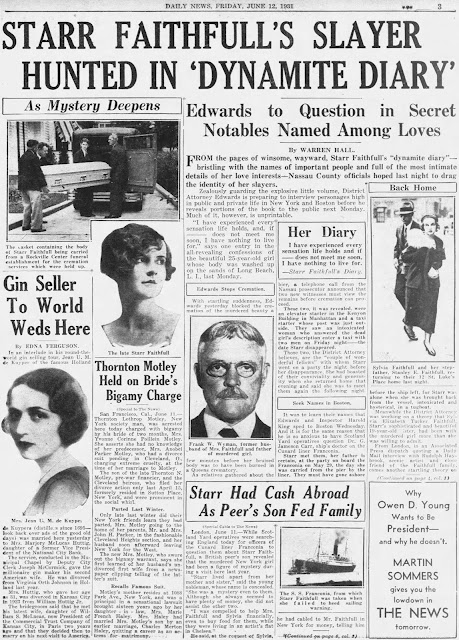 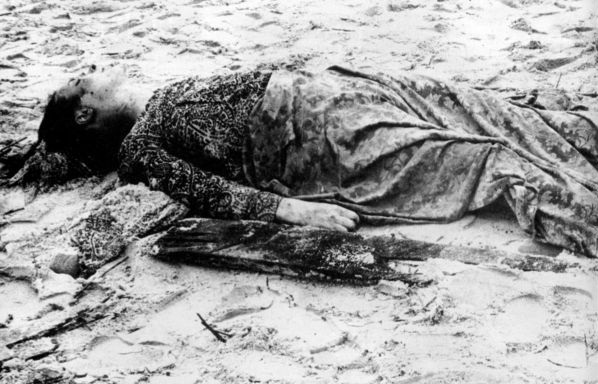 Starr Faithfull found at Long Beach
Doctorow said, “John O’Hara was a newspaperman before he turned to fiction and the seeming ease with which he wrote stories and novels must have come of that facility given to reporters who write against a deadline. His output was prodigious … In many instances his prose has a reportorial tone. The presumptive reality in an O’Hara first sentence is almost insolent. He is a writer who has made it his business to know things and likes to tell you what he knows.” 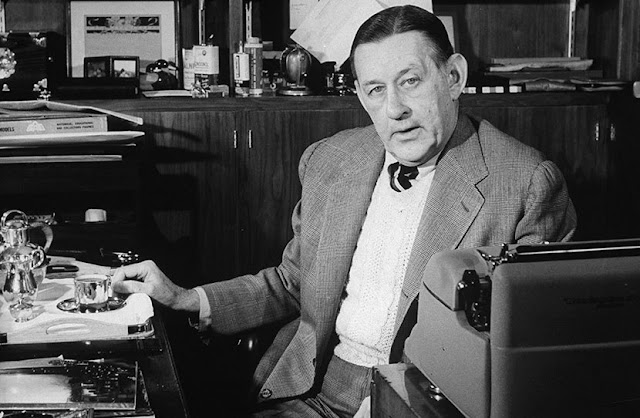 O'Hara was born in Pottsville, Pennsylvania, on January 31, 1905. As The New Yorker tribute observed, “From the time he was a teenager, O’Hara supported himself with his typewriter.” He worked for various local newspapers before moving to New York City and writing short stories for magazines. He said he learned from reading Ring Lardner “that if you wrote down speech as it is spoken truly, you produce true characters.” He died from cardiovascular disease in Princeton, New Jersey, on April 11, 1970. 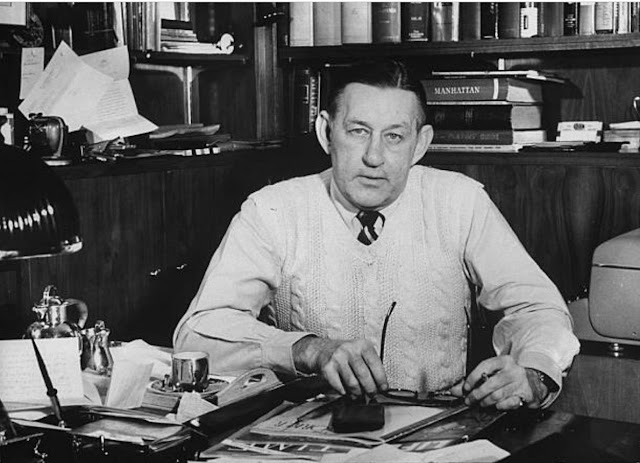 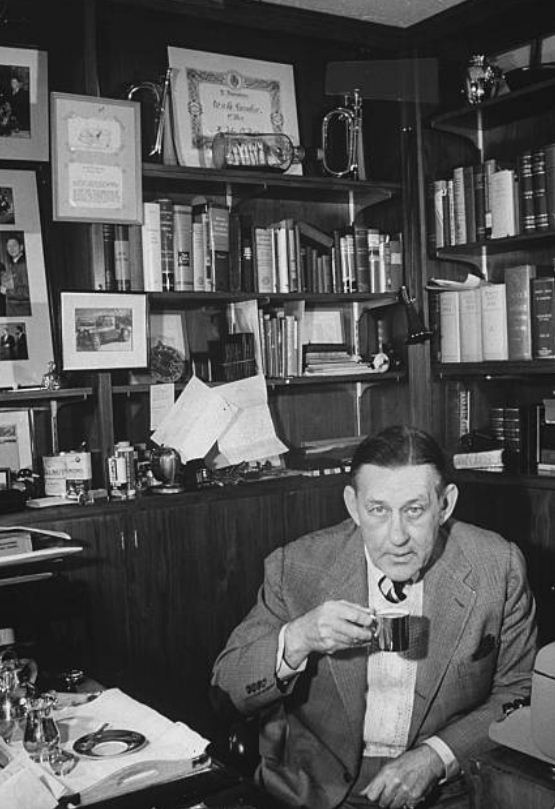 Posted by Robert Messenger at 20:59

I liked this one sir. Now I feel compelled to seek his works and start binge reading. Thanks.

Fine story. Another author and typewriter to be added to Richard P's collection.
I was raised not far from Pottsville, and I worked in radio there for a few years. Edgar Allen Poe lived there a few years; up the street from the diner I used to visit. Until now I never heard of John O'hara. None of my English teachers ever assigned one of his short stories or books. We all knew about John Lewis and his cell in the Pottsville prison and the Molly Maguires. No mention of an author other than Poe.

Another great article, I knew abit about John O'Hara but you piqued my interest to read him.

I haven't read O'Hara, but certainly know his name, and am glad to add him to my list—thanks! But I believe that's a Remington Noiseless, not a KMC.

I'll have to change the story - and the model name - now that he's on your list!