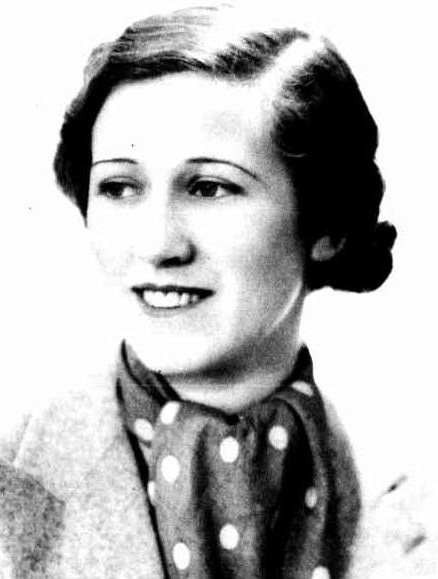 Mabel Freer
Echoes of Today’s Shameful Treatment
of Immigrants
Minister Labelled a 'Standing Embarrassment'
by His Own Party
On the morning of Wednesday, June 2, 1937, Mabel Magdalene Freer was sitting at an Imperial 50 standard typewriter in the office of her New Zealand solicitor, Matthew Oliver Barnett, at 23 Walworth Street, Karori, Wellington. Mrs Freer was happily tapping away with two fingers when suddenly her live took a sharp turn. A telephone call from a representative of the Australian Government Trade Commissioner in Wellington informed her that the Australian Government’s senseless ban on her entering Australia had been lifted. The Federal Cabinet had met in Melbourne and decided to change its stance on Mrs Freer. In the eyes of Australians, its extreme stupidity had reached a nadir.
Mrs Freer rushed into Barnett’s office and kissed him, saying, “Oh, I’m so thrilled.” She had won a significant battle, fought almost single-handedly for the best part of nine months. In the process, her much-publicised case had justifiably belittled the Australian Government, leading to the fall of a Federal Minister and an undermining of the Australian public’s confidence in its political leaders. 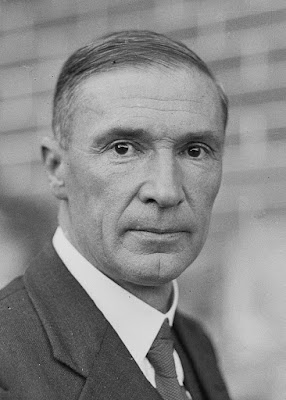 Thomas Paterson
The Australian Dictionary of Biography entry on Interior Minister Thomas Paterson says Paterson’s “maladroit handling of the controversy” resulted in him standing down from the ministry and resigning as his party’s deputy leader. Indeed, the whole sordid affair had rocked the Government to its core. It was recognised as an important ingredient in Labor’s win in the Gwydir by-election and severe defeats in the March 1937 constitutional referenda. It seriously threatened to end the coalition arrangement between the United Australia Party and the Country Party in early December 1936. In the crucial debate about the Freer affair in the House of Representatives on November 12, not one UAP Minister spoke in support of Paterson. One observer wrote, “The extent of the damage which the Freer Case caused the Government can scarcely be exaggerated.” 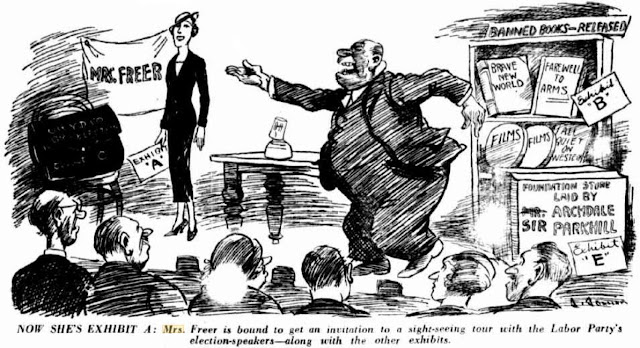 On the evening after Mrs Freer was given her good news, she was interviewed through a radio telephone link with a reporter from Frank Packer’s Sydney Daily Telegraph. She told the newspaper, “I do not contemplate any action against Mr Paterson. I prefer to think of him as a frightened soul, hiding behind his portfolio.” How right she was. Paterson had chosen to stand by his department officials, all the while knowing they had no legitimate case against Mrs Freer. Had Paterson admitted the truth – that he had been lied to - he would, under the existing Westminster System, have had to accept the full responsibility himself, and would have been obliged to resign earlier than he did. But he knew the writing was on the wall on June 2. “The decision [to lift the ban on Mrs Freer] has not affected my own personal relationships with Cabinet,” Paterson had said. He was lying again – he knew his days as a minister were numbered.  He claimed ill health when he resigned at the end of November, but four months earlier the Telegraph reported that Paterson had become a “standing embarrassment” to the Country Party because of the “Mrs Freer ban fiasco … the public resented [Paterson’s]  action in denying admittance to a Britisher who had no stain whatsoever on her character”. 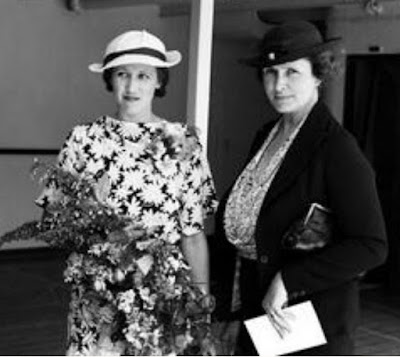 Mrs Freer arrives in Sydney, July 12, 1937
More than a decade before Australian citizenship even existed, a British passport holder was denied the right to land in a British Dominion for no legitimate reason. The Freer Case remains a major blot on the Australian mythology of “a fair go for all”. As the Telegraph said, “It is unthinkable in a democracy for a man or woman to be condemned without trial, by a secret tribunal. This is what happened to Mrs Freer.”
The Telegraph, hoping to further embarrass the Australian Government, had already tried to intervene in the case. In early December 1936 Mrs Freer had accepted an offer from the newspaper to pay her fare on the Awatea to sail to Australia from New Zealand in a second attempt to enter this country, but it turned out to be as unsuccessful as the first. A petition to the High Court on December 4 for a writ of habeas corpus also failed. 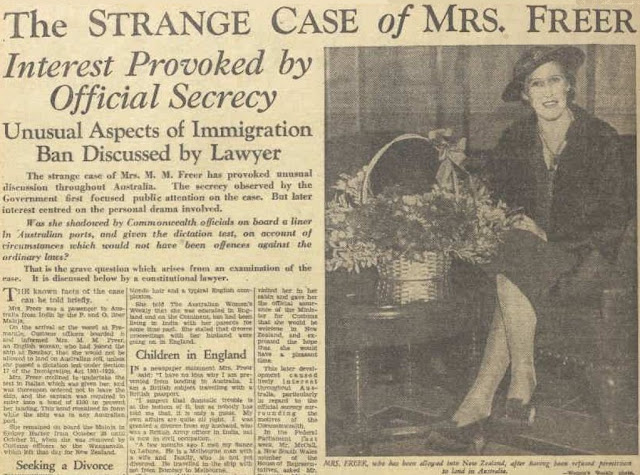 Upon her ban being lifted, Mrs Freer told the Telegraph, “At last your stonewall Government has decided I am not the Soviet spy, the drug runner, the white slave trafficker, or any of those vile things that once they let Australians believe. But I must bear no malice. I congratulate Mr Paterson that he has kept me out so long. He has had his pound of flesh … I am a very ordinary British subject, not the woman with a deadly secret past hinted at so unkindly in those mythical things Mr Paterson would not disclose.” Paterson had called Mrs Freer an “adventuress” and an “undesirable character”, implying all sorts of dark and seedy activities. None of it had any substance in fact. Paterson had relied on unfounded evidence from a convicted perjurer.
So what was Mrs Freer’s “crime”? She was a divorcée who fell in love with an Australia army officer in India, a man caught in an unhappy, forced marriage, simple as that. Her lover was Jarrahdale, West Australia-born Royal Military College, Duntroon, Canberra graduate Robert Edward Dewar, more commonly known as Ted or, to his rugby teammates, “Dumpy” Dewar. Unwittingly – and through no fault of their own - the couple found themselves embroiled front and centre in one of the most embarrassing and widely ridiculed episodes in this country’s very shabby immigration history. 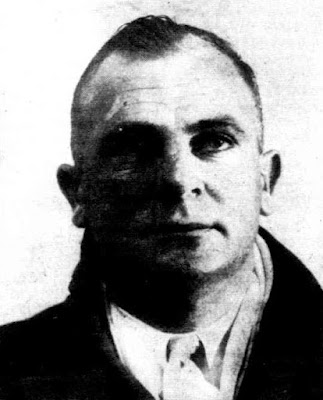 
In September 1935, Dewar, while a lieutenant with the Royal Australian Garrison Artillery and Australian Staff Corps at Fort Queenscliff, Victoria, was transferred to Mumbai for a year’s secondment to the British Army’s 28th Field Battalion. In May 1936 he met Freer (née Ward), a well-connected lady born in Lahore on October 10, 1911. The two decided to return to Australia together, hoping for a happy life here. But Dewar’s father, himself a very senior army officer, and Ted Dewar’s in-laws had other ideas. They contacted Paterson and succeeded in having Mrs Freer barred from this country. Either wilfully or otherwise, Paterson had allowed himself to confuse Mabel Freer with a Eurasian woman called Vera Freer, who, ridiculously, was said to be “identical” to the Anglo-Irish Mabel Freer. Vera Freer, Paterson’s department officials reported, had lived with an Armenian who had moved to Iraq. Vera was “a cunning and utterly immoral woman. She is little better, if at all, than a common prostitute.” The sheer stupidity of officials in all this is even today breathtaking in its irresponsibility.
On October 20, 1936, Ted Dewar and Mrs Freer, travelling on the Maloja from Mumbai on British passports, docked in Fremantle. Before Mrs Freer could disembark, officials from the Australian Department of Immigration came on board and administered a 50-word dictation test. Mrs Freer failed and was refused permission to land in Australia. When her ship arrived in Sydney 10 days later, she was escorted under armed guard on to the Wanganella bound for Auckland. In “Dictating Morality: The Exclusion of Mrs Mabel Freer”, Pauline Montagna wrote that New Zealand’s attitude towards Mrs Freer was “in stark contrast” to Australia’s – “she was welcomed with open arms … As they have often done, the New Zealand Government proved itself much more progressive and compassionate than its counterpart across the Tasman”. It dismissed “salacious racist and sexist gossip” about Mrs Freer as “irrelevant”. Indeed, a department officer from New Zealand’s Acting Minister for Customs was sent to greet Mrs Freer and wish her a pleasant stay. 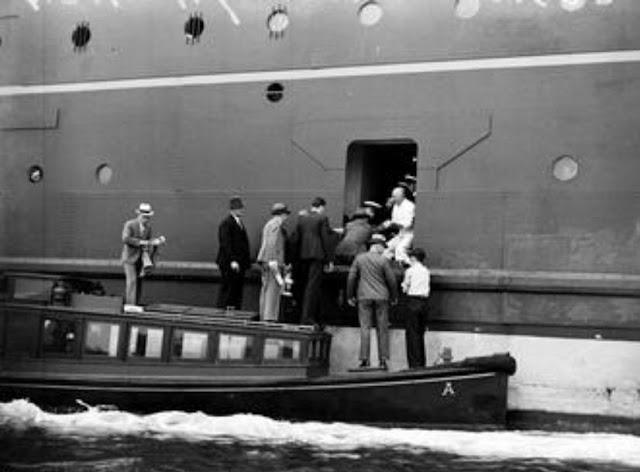 Australian immigration officials boarding the Awatea in Sydney in December 1936 to administer the impassable dictation to Mrs Freer for a second time.
At Fremantle Mrs Freer had been subjected to one of those cruel language examinations established under the 1901 Immigration Act to implement the White Australia Policy – in other words, to keep “undesirables” (usually Asians and people of African descent) out. In her case it was in Italian (in the 1934 case of anti-Fascist Czech journalist Egon Erwin Kisch, it was in Scottish Gaelic). On her second attempt to disembark in Australia, in December 1936, Mrs Freer was again given a dictation test in Italian. She refused to co-operate by putting her fingers in her ears. Back in New Zealand, Mrs Freer taught herself shorthand and typewriting in order to pay for her legal costs by working for her solicitor, Barnett.
The day after she was told she was finally allowed into Australia, the Army moved Dewar to Fremantle, as far from Mrs Freer as possible. She arrived in Sydney on the Wanganella on July 12 and, met by huge crowds, “was given a reception equal to that of an international celebrity”, according to The Sydney Morning Herald. Before landing, she was presented with “a shoal of congratulatory letters and telegrams”. “When the Wanganella berthed, the wharf was black with people, with an overflow to the street. A line of cars and taxis almost two miles long stretched down the pavements outside. Her walk from the gangway to a waiting car had the elements of a procession of triumph.” After all, as a satisfied Mrs Freer said, “a mere woman” had been able to win out in face of Government opposition. 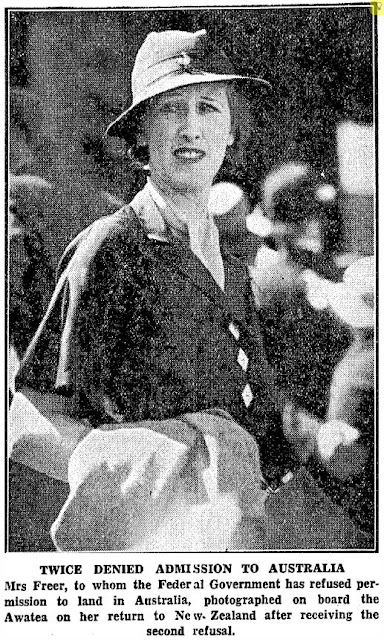 As for her plans to marry Dewar, however, the arrival was anything but a triumph. The couple initially held on to hope of meeting again, but in time they went their separate ways and eventually married other people. In World War II Dewar served in the Middle East and was later General Staff Officer Grade 1 of special operations of the Morotai Forces. After the war he was a military observer in Indonesia and became Lieutenant-Colonel of the 27th Coast Regiment and later a member of the Adjutant-General’s office in Melbourne. After military life he became a director of Kmart. Dewar died in Melbourne on June 16, 1978, aged 68.  Mrs Freer opted for the quiet life of a suburban housewife, after marrying a butcher, Nick Cusack, in Gosford, NSW, in 1938. She died at Kingswood, Sydney, on July 5, 2004, aged 92. 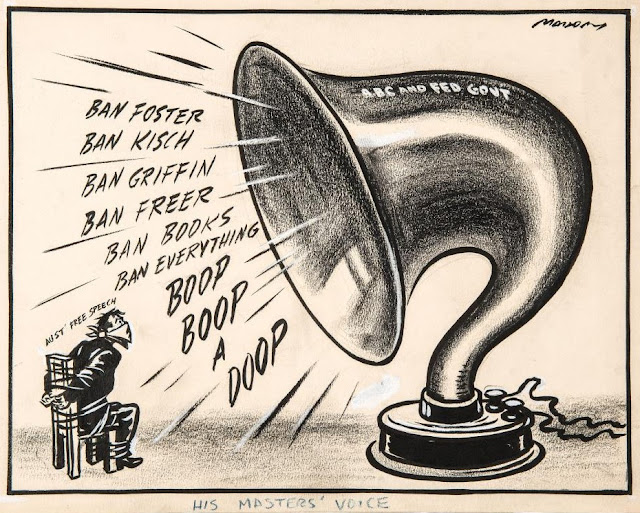 In the Macquarie Law Journal’s “Dictating to One of ‘Us’: The Migration of Mrs Freer” (2005), Kel Robertson, Jessie Hohmann and Iain Stewart
said, “on the political level, the Freer affair was … a blunder which exposed the preparedness of a Minister to use his statutory powers to impose his own (or his Department’s) values on strangers. It otherwise made clear the preparedness of United Australia Party Ministers to place the retention of power above the fair treatment of a foreign woman.  Beyond the publicity of 1936 and 1937, Mrs Freer as victim has appeared to symbolise a Britishness and a white identity that Australians have been keen to put behind them. Only in the light of documentary evidence … does it emerge that her being a woman was a major factor in her treatment.” 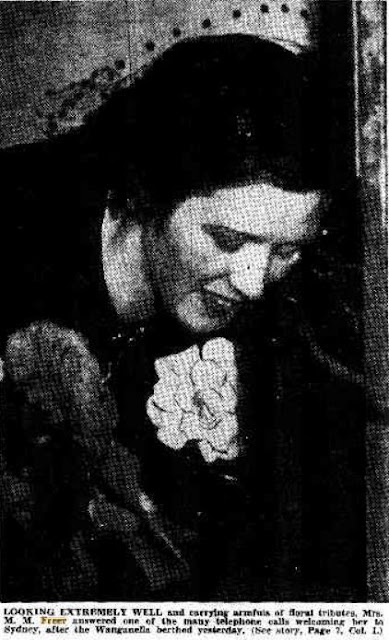 The authors went on, “If there are significant aspects of the public discussion of the Freer Case, they must include the ease with which critics of Paterson’s actions were able to translate deficiencies in the government’s handling of the case into breaches of important principles of British justice or of common law rights. Commentators in the newspapers, representatives of community groups and speakers in local legislatures referred repeatedly to ‘the liberty of the subject’. As early as July 1936 it was declared: ‘It is unthinkable in a democracy for a man or woman to be condemned without trial, by a secret tribunal.’ … The treatment of Mrs Freer breached, it was alleged, ‘the vital principle of individual liberty’. It was suggested that ‘no one should be tried in the dark’ and that ‘Star Chamber methods have never been acceptable to Australians’.


“The lasting significance of the Freer Case is that it not only illustrates a past tendency but also serves as a point of access to discuss questions of belonging, exclusion and identity that remain relevant to the Australian community today.” 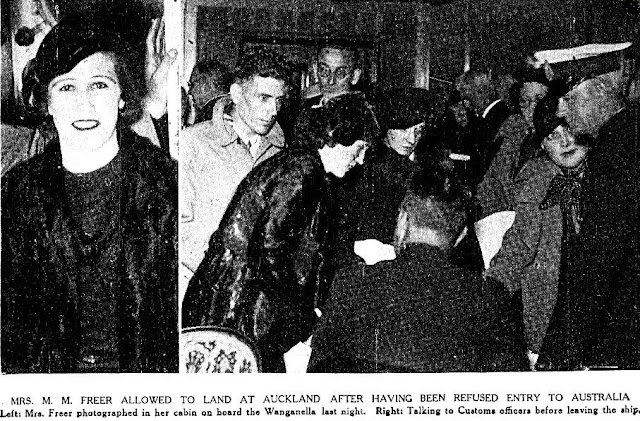 Posted by Robert Messenger at 17:07