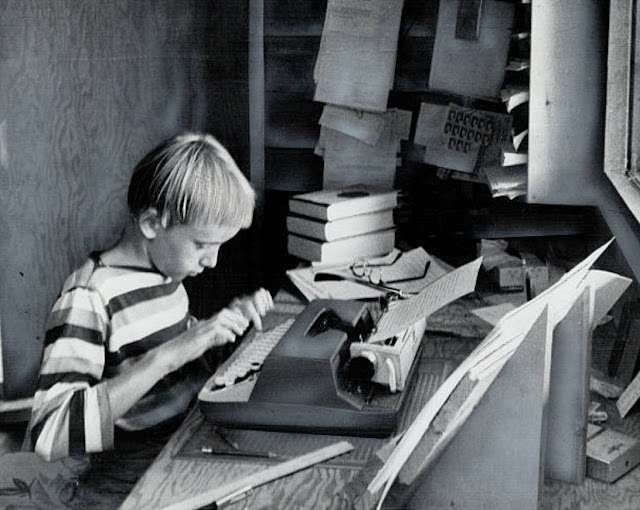 In the Barr Smith Library of the University of Adelaide in South Australia, there is an illustrated book – actually three pint-sized adventure tales under one cover - called The Magic Mailbox, The Boronian War & Trouble Underground. The university’s librarians, in their infinite wisdom, say these works are by William Robson (1785-1863). They are right, in as much as there was an English writer and translator called William Robson, who fell into poverty in spite of writing such tomes as The Walk, or the Pleasures of Literary Associations (1837), The Old Playgoer (1846), John Railton, or Read and Think and The Life of Cardinal Richelieu (both in 1854) and The Great Sieges of History, as well as publishing translations of Joseph François Michaud's History of the Crusades (1852), Alexandre Dumas's Three Musketeers (1853) and Honore de Balzac's The Quest of the Absolute (1859). Trouble is, the book in the University of Adelaide library was published by New Press in Toronto in 1970.  And the author was actually William Bertie Provost Robson, an 11-year-old boy who wrote the stories on a Smith-Corona portable typewriter. 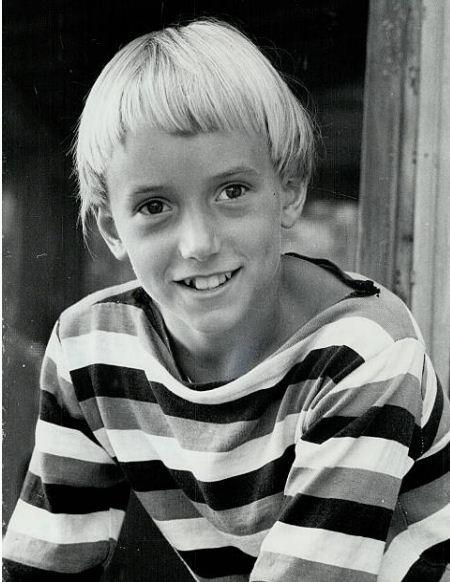 Bill Robson in 1970.
And it’s unlikely this William – or Bill – Robson will die destitute, like his English namesake. He is at present president and chief executive officer of the C.D. Howe Institute, an independent not-for-profit research institute whose mission is to raise living standards by fostering economically sound public policies. It’s widely considered to be Canada's most influential think tank - a trusted source of essential policy intelligence, distinguished by research that is nonpartisan, evidence-based and subject to definitive expert review. 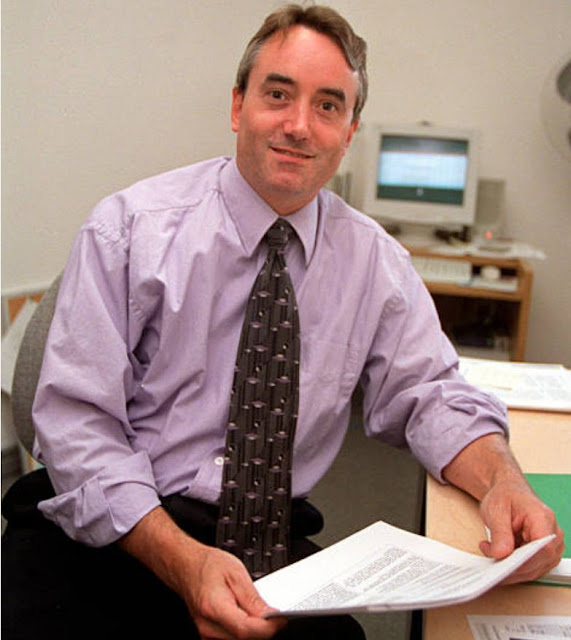 Bill Robson in September 2001.
Although it seems this particular Bill Robson no longer wishes to make any claims to fame about his book writing, it is almost certain that he remains the world’s youngest published author among those who wrote their manuscripts on a typewriter. 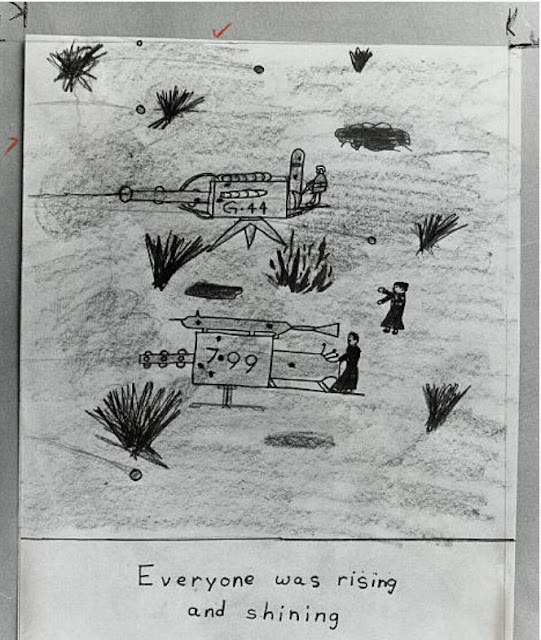 Bill's artwork for The Boronian War.
There have been many claims – most especially in the past five or six years – to the title of the world’s youngest published author. The Guinness World Records has its own claimant, but none of those listed online, including an exhaustive collection of names on Wikipedia, appears to have used a typewriter. Indeed, Bill Robson’s name does not appear on any of these lists, even the Wikipedia one, although his achievement – given the minor success of his collection of stories – may well give him a stronger candidacy than almost all others. 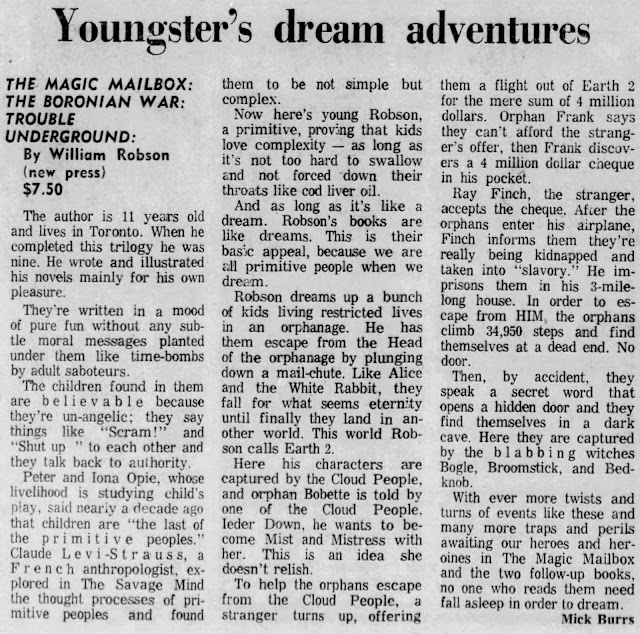 Edmonton Journal, December 18, 1970.
Perhaps stories about young authors have begun to proliferate online because, in this age of computer and video games and the like, news outlets and bloggers have found it greatly heartening that young people can still be imaginative enough, and creative enough in their own right, to write books. In which case, of course, someone who used a typewriter to write a trio of yarns which were merged together in a published book should be royally saluted by the Typospherian – even 49 years after the event!

The Star, Phoenix, December 5, 1970.
I won’t go into the circumstances behind Bill Robson’s 1970 book, instead leaving that to the article which appeared in Maclean’s magazine in Canada on January 10, 1970. The image at the top of this post was taken at Georgian Bay by Mario Geo for the Toronto Star on August 12, 1970, three days after Bill’s 11th birthday (he was born on August 9, 1959). At that time, Bill’s book was due to be published in a month or two. 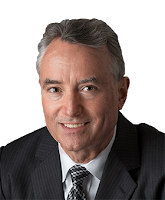 Bill, left, has been chief cook and bottle washer at the C.D. Howe Institute since July 2006, after serving as the institute’s director of research from 2000. He still writes a lot, just not on a typewriter any longer. Bill is responsible for more than 230 monographs, articles, chapters and books on such subjects as government budgets, pensions, healthcare financing, inflation and currency issues. His work has won awards from the Policy Research Secretariat, the Canadian Economics Association, and the Donner Canadian Foundation. He is a senior fellow at Massey College and a member of the panel of senior advisors to the Auditor-General of Ontario and the World Economic Survey expert group, and a regular commentator on BNN/Bloomberg. 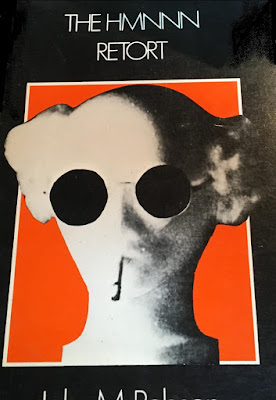 Bill’s father, John Mercel Robson (1927–1995) was the co-author of the witty The Hmnnn Retort, also published by New Press in 1970 (how many fathers and 12-year-old sons have had books published ever, let alone in the same year by the same publishing house?). On a much heavier note, Jack Robson was general editor of the 33-volume Collected Works of John Stuart Mill. He was also the chairman of the Manuscript Review Committee at the University of Toronto Press from 1975 until his death, and served as the general editor of the collected papers of Northrop Frye (1912-91), the hugely influential Canadian critic and literary theorist.

The Province, Vancouver, September 17, 1970.
As for Jack’s author son, among Bill Robson’s present-day roles is advising new graduates to work on their communication skills and find something they love to do. A typewriter or two might help there. In the meantime, here is a rundown of young authors:
Guinness Book of Records
The youngest commercially published female author is Dorothy Elmhisrt Straight (born May 25, 1958), of Washington, DC, who wrote How the World Began in 1962, aged 4. The book was published in August 1964 by Pantheon. Dorothy was then 6. Her father, Michael Whitney Straight, was a novelist and patron of the arts – and a KGB spy. 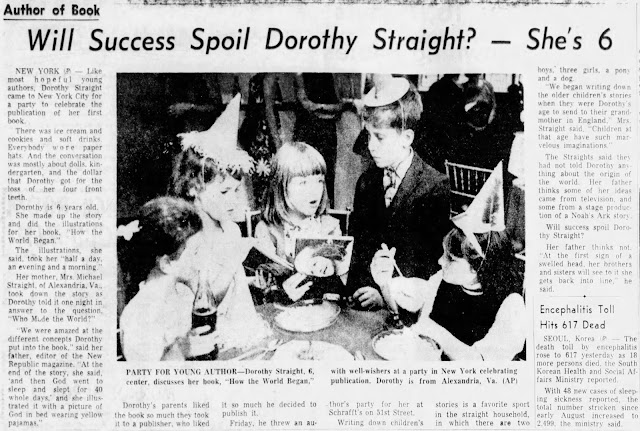 Rochester, New York, Democratic and Chronicle, September 13, 1964
TopTenz’s 10 Youngest Authors in History
(as at September 27, 2014):
10. Romanian-born French author Flavia Bujor (born 1988) wrote her first book, The Prophecy of the Stones, when she was 12 and published it with HarperCollins when she was 14.
9. Nancy Yi Fan is a Chinese-American author, born in Beijing in 1993. She moved to Syracuse, New York, when she was 7, started writing her first novel, Swordbird, when she was 11, and completed it a year later. She boldly emailed it directly to the CEO of HarperCollins, who published it in 2007. It was a New York Times bestseller, and HarperCollins also published Sword Quest in 2008 and Sword Mountain in 2012.
8. Florida’s Jake Marcionette wrote Just Jake, a loosely autobiographical novel about moving to a new school and “how kids can do big things” in the summer of 2012, at the age of 12. His novel was published the next year and reached the New York Times bestseller list. He was the youngest author in the history of Penguin Books to land a publishing deal. Three more books have followed.
7. Alexander Pope wrote his first poem, “Ode to Solitude,” at the age of 12 in 1700.
6. Jyoti and Suresh Guptara are twins who finished the first draft of their 700-page epic fantasy, Conspiracy of Calaspia, when they were 11. They had to rewrite it 10 times before it was finally accepted for publication when they were 17. When Jyoti turned 18 in 2007, he was the youngest full-time novelist in the world. He also published an article in The Wall Street Journal when he was 15, the youngest person to do so.
5. Matthew Joseph Thaddeus Stepanek was born with a rare form of muscular dystrophy, had to lug around an oxygen tank and was wheelchair-bound up to his death at the age of 14. Mattie wrote seven books of poetry. He started writing poetry when he was 3 to cope with the death of his brother. A book of his poetry was published by a Virginia press in 2001. He died in June 2004.
4. Alec Greven was 9 when he wrote How to Talk to Girls. Alec has also written How to Talk to Moms, How to Talk to Dads and How to Talk to Santa, all of which are published by HarperCollins. He made the New York Times bestseller list for a book he said took a week to write.
3. Daisy Ashford is famous for writing The Young Visiters in 1890 at the age of 9. The book wasn’t published until 1919. When she was 4 she dictated a story called “The Life of Father McSwiney” to her father, which was published in 1983.
2. Christopher Beale was 6 when he wrote a story in his bedroom after lunch every day. It grew to 1500 words and five chapters. Called This and Last Season’s Excursions, it was published in London in November 2006. Christopher is from Zug in Switzerland.
1. Dorothy Straight. 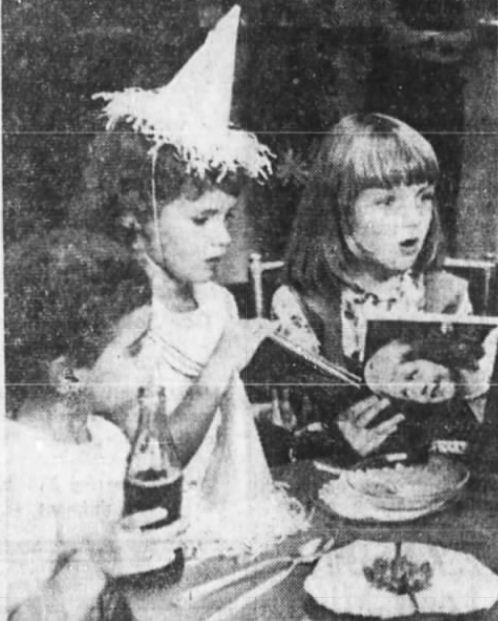 Dorothy Straight, right, with her book, 1964.
World’s youngest bi-lingual published author
December 11, 2017: Saarth Khanna Sohum, 6, a Singapore second-year kindergarten student, wrote a book first in English, then translated it into Hindi. Giant Twoe & 100 Beanstalks is a twist on the classic fairytale Jack and the Beanstalk. Other claimants
In 2005 Brazilian Adauto Kovalski Da Silva, 5, had a book published.
December 7, 2017: Thanuwana Serasinghe, 4, the son of a Sri Lankan couple living in the Seychelles, had his book published by Sooriya Publishers. It is titled Junk Food.
October 6, 2016: Michele Nkamankeng of Kensington in Johannesburg, 6, completed her first book. A year later she completed the fourth in her series, The Golden Ring.
2005: Libby Rees, of Hampshire, England, was 9 when she wrote 60 pages on how she dealt with her mother and father’s divorce. Aultbea Publishing put out the book Help, Hope, Happiness.
May 2015: Brooklyn's Anaya Lee Willabus, 8, launched her writing career with The Day Mohan Found His Confidence. It made her the youngest person in the US to publish a chapter book.
November 1, 2018: Wisconsin boy Aiden Zeng, 9,  self-published two chapter books and had another three in the works in his series of novels The Great Dinosaur Rebellion. 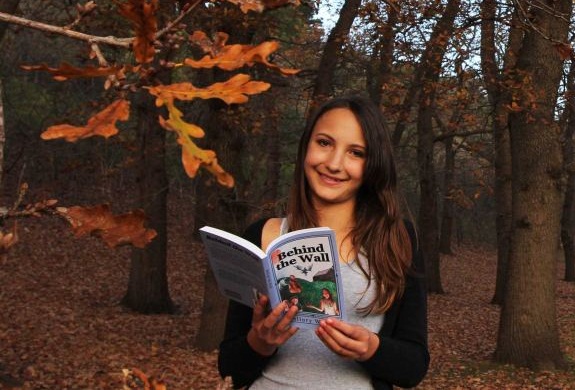 June 20, 2017: Mallory Whiting, above, of Mount Gambier, South Australia, began writing her first book at 10, finished it at 11, and at 13 saw Behind the Wall published.
December 24, 2018: Stacey Fru, 11, of Johannesburg, says she will have two books - Where is Tammy and Tim's Answer - published in 2019. She became Africa's youngest published author after writing her first book, Smelly Cat, at 7.
Wikipedia, Selected
(not already mentioned above)
Wikipedia says, "This is a list of notable books by young authors and of books written by notable writers in their early years  ... The list is arranged alphabetically by author."
Alexandra Adornetto (born 1993) wrote her debut novel, The Shadow Thief, at 13. It was published in 2007.
Amelia Atwater-Rhodes (born 1984) had her first novel, In the Forests of the Night, published in 1999.
Celeste and Carmel Buckingham wrote The Lost Princess when they were 11 and 9.
Taylor Caldwell's The Romance of Atlantis was written when she was 12.
Hilda Conkling (1910–1986) had her poems published in Poems by a Little Girl (1920), Shoes of the Wind (1922) and Silverhorn (1924).
Abraham Cowley (1618–1667), Tragicall History of Piramus and Thisbe (1628), Poetical Blossoms (1633).
Juliette Davies (born 2000) wrote the first book in the JJ Halo series when she was 8. The series was published the following year.
Anne Frank (1929–1945) wrote her diary for 2½ years starting on her 13th birthday. It was published posthumously as Het Achterhuis in 1947. 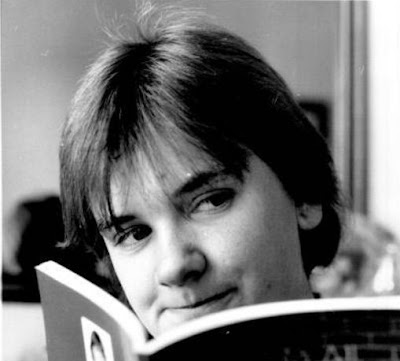 Posted by Robert Messenger at 10:25

Great to know there were children who were also authors. Another writer and their typewriter for Richard P. As soon as I saw the first photo I thought "Smith-corona Classic-12. I've got one presently in use on my desk. Good work Robert.

Wonderful. I want to see Jimmy the Jet!