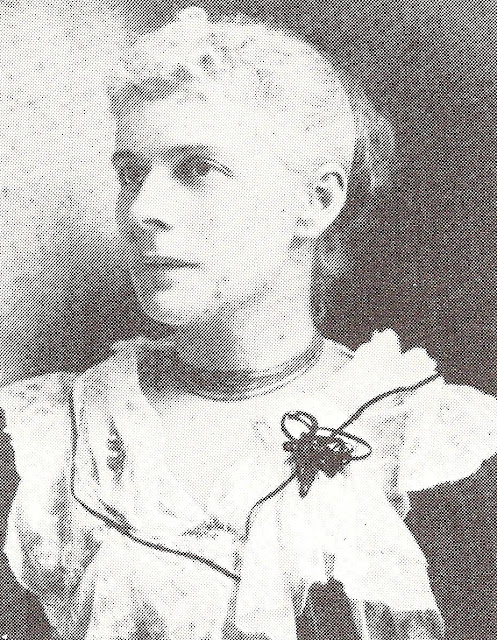 On International Women’s Day it's appropriate to salute the American-born woman who introduced typewriting as a profession to Australia.Dora Elizabeth Robertson Armitage Cooke was born in St Clair, Michigan, on July 14, 1858. She arrived in Sydney from London in 1887, armed herself with a Caligraph, and the following year established the Ladies’ Typewriting Association. 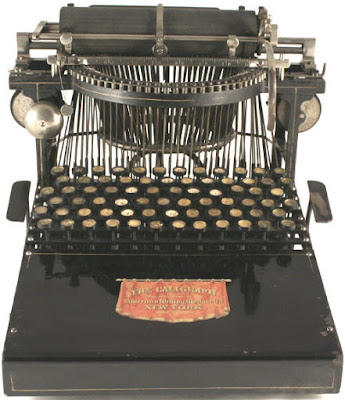 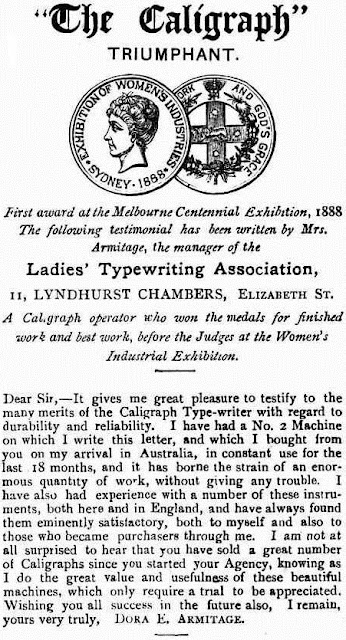 Getting work as a typist in Sydney 132 years ago proved tough going for Dora. One company she approached replied, “My dear Madam, we have done without typewriting all these years, and think we can do without it longer.”Dora’s pioneering work in opening a broad avenue for educated young women to gain financial independence from decent, dignified employment led to her being a founder of the National Council of Women of New South Wales in 1896 and, in 1899, representing Australia at the International Conference of Women in London. Dora Robertson grew up in a lumber settlement in Michigan which was supervised by her Scottish-born father James Robertson and his Irish wife Phoebe Maiben (nee Roberts). In 1862 the family settled in Galle in Ceylon (now Sri Lanka), where Dora’s father opened a branch of the Chartered Mercantile Bank. At age eight, Dora was taken to England to be educated in Bath. She returned to Colombo in 1876. The next year she married Charles Cyrus Armitage, the son of a then wealthy coffee growing family. In 1881, blight struck the coffee crop and the following year the family’s fortunes collapsed. Dora was only 24, with four children, and her hair turned prematurely white with the anguish.Dora returned to England with her children, but couldn’t bear living with her controlling mother-in-law, so moved in with an aunt in London, Clementine Rose Traill. When Dora suggested an interest in starting a career as an actress, to make ends meet, Mrs Traill had heart palpitations. The stage was then considered by the well-to-do to be one short step up from street walking. So Mrs Traill went out and bought Dora a Hall index typewriter. It was to change her life. 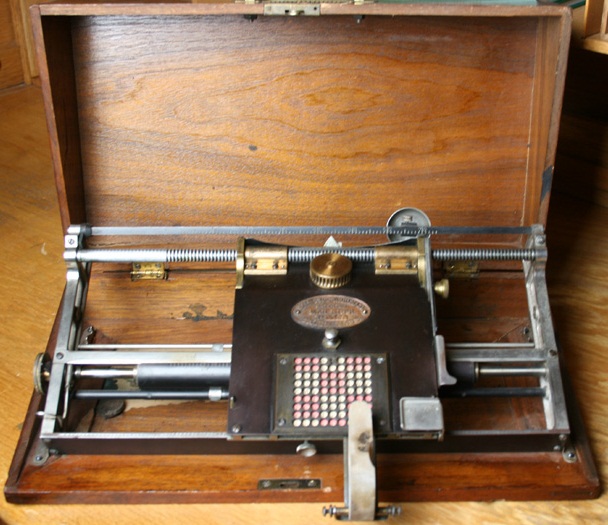 Dora offered one of the first typewriting services in London and then, after making sufficient money and selling off her jewelry, she started her own typewriting office in Birmingham in 1886. In the meantime, her husband had moved from Sri Lanka to Sydney, but had yet again become involved in a failed business venture. The Armitage family paid for Dora to sail to Australia in 1887, in the hope she may be able to support him.In Sydney Dora bought a Caligraph. She was backed in her enterprise to make the typewriter provide her with a living by Lady Lucy Fairfax, the wife of Sir James Reading Fairfax, co-owner of The Sydney Morning Herald. Lady Fairfax helped organise Sydney’s first Exhibition of Women’s Industries in 1888.With money lent to her by Lady Fairfax, Dora opened her Ladies Typewriting Association in the Victoria Arcade, Sydney, on October 1, 1888. The association immediately won a special prize at the exhibition. And a month later, Muriel Edwards became Dora’s first pupil in employment, when she joined the staff of the Sydney Water Board.
Dora insisted her typists must have “a thoroughly sound English education … a knowledge of French, Latin  and even of Heathen mythology …” She said “there is certainly no other business that a woman could undertake where she would have a better chance of earning her livelihood in a comparatively short time …” Her typists earned between 25 and 30 shillings a week.

Daily Telegraph, Sydney, February 24, 1894
Dora’s husband died in January 1897, but her efforts for the benefit of working women went on unabated. On her return sea voyage to Australia from the International Conference of Women in London in 1899, Dora sat at the ship captain’s table, and met and fell in love with the captain, Walter White Wingrove Cooke. They married in 1902. Dora sold her Sydney business, returned to England, but continued to campaign for women’s suffrage and social reform.Dora often returned to Australia, and would remark on “the thrill of seeing Sydney’s modern business girls pouring out of ferries and stations on their way to work, knowing that my young women had been the first”.
Dora died at Welwyn Garden City, Hertfordshire, England, on May 30, 1945, aged 86. 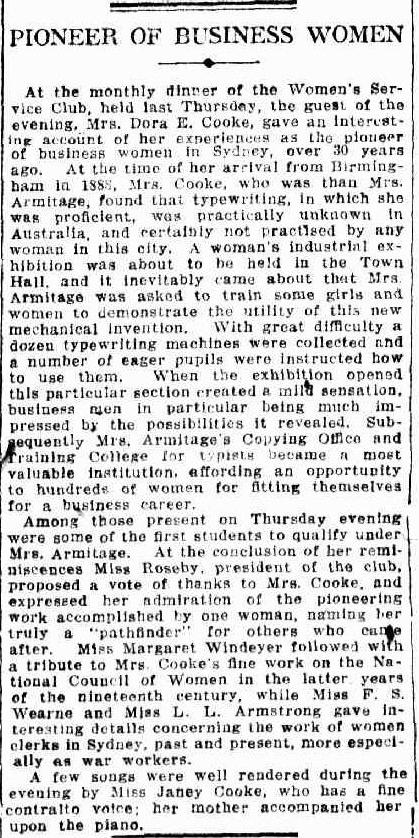 Daily Telegraph, Sydney, February 28, 1922
One of her sons, Hugh Traill Armitage CMG, became one of Australia’s leading bankers and as a governor of the Commonwealth Bank from 1941-48, oversaw its constitution as a central bank.
Posted by Robert Messenger at 20:56

Excellent essay, great research. It was amazing how typewriting changed the business environment. It allowed the entrance of women, with the skills, into business and gave them a chance to earn a living. The next big thing - carbon paper.

This is an excellent 'back story' to one of our founding members. We are grateful for the research and the information contained in this blog. National Council of Women of NSW - ncwnsw.org.au