A Tribute to Peter Tytell, Son of The Typewriter Man 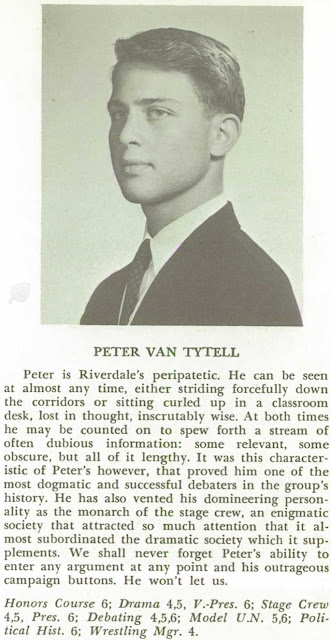 Peter at Riverdale Country School, New York, in 1963, aged 18
New York typewriter forensics expert Peter Van Tytell passed away at his home in Manhattan on August 11, two days before his 75th birthday*. His death came 10 months after Peter and his now widow Tikya had won in the Supreme Court of New York the right to move forward with their case over Peter’s malignant mesothelioma, against the Mole-Richardson Company. Mesothelioma is a rare and fatal type of cancer caused by exposure to asbestos.
Peter contracted the disease while working at various locations for the New York City Parks Department as an electrician-stagehand hanging lighting during the summer of 1969. He was diagnosed with mesothelioma on February 16, 2017. MRC cables insulated with asbestos were part of New York City festival lighting projects, such as street events and block parties. The Times Square Stage Lighting Company was a third-party defendant in the court case. The Tytells began action on April 21, 2017, to recover for damages resulting from Peter’s exposure to asbestos. 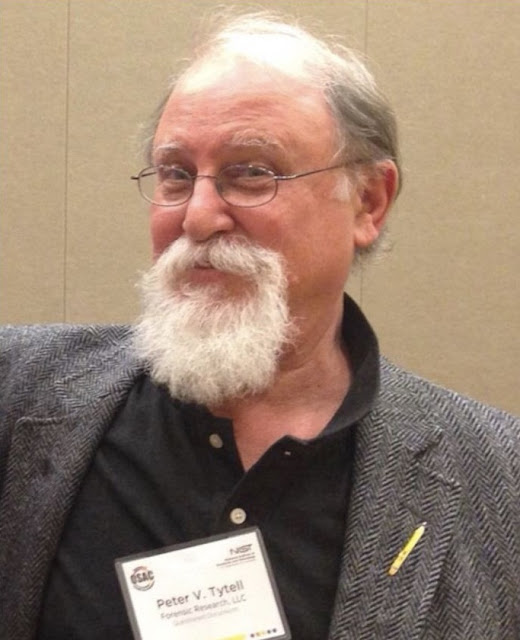 Apart from setting up stages and lighting for music festivals in New York City, Peter worked as a trucker and carpenter and in the 1960s lived in San Francisco, working as a roadie for the Steve Miller Band, the Grateful Dead and Janis Joplin. Peter was present when the Dead first played with two drummers. 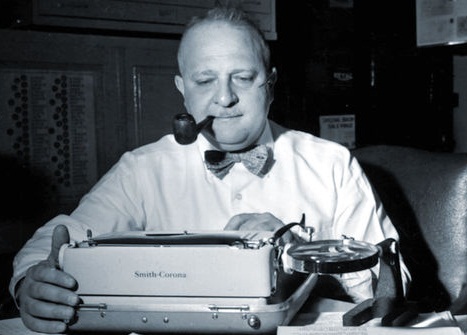 Martin Tytell
Peter ran his late father Martin’s Tytell Typewriter and Questioned Document Company in a second-floor store at 116 Fulton Street, NYC, to July 31, 2001, after Martin had retired at the age of 87 at the end of 2000. Martin, known as “Mr Typewriter” died on September 11, 2008. His wife Pearl is still alive at the age of 102! The company they founded together in 1938 catalogued two million typefaces in 145 languages, from Gaelic to Sanscrit. Peter continued the document investigation service started by his mother. 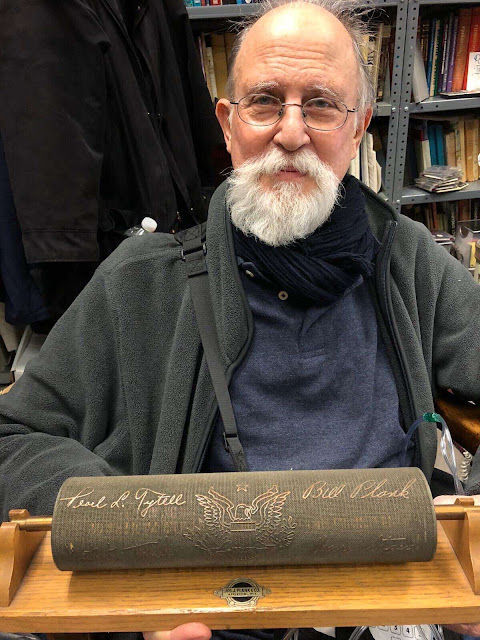 One of Peter’s success stories concerned a set of documents submitted by the Qatar Government to the International Court of Justice in The Hague in a dispute with Bahrain over possession of islands in a stretch of oil-bearing ocean. He was called in as an expert and was able to establish that the “Royal Seal” on the “century-old” papers dated back only to 1956. Peter had been browsing a gift shop at The Hague when noticed that a collection of floral-motif Latin seals from the 1980s bore a close resemblance to the seals used on the Qatar documents. Further examination showed that the newer seals had been placed on reused documents from the Ottoman Empire to create the forgeries. “These findings have led to the determination that the suspect documents bearing these seals could not have been prepared on or about their purported dates,” he wrote in his report. Qatar withdrew the documents in 1998. And in 2001 the court ruled that the Hawar Islands, the largest of those in dispute, would stay with Bahrain, and rejected Qatar’s claim of sovereignty. The court awarded Qatar a smaller island region. 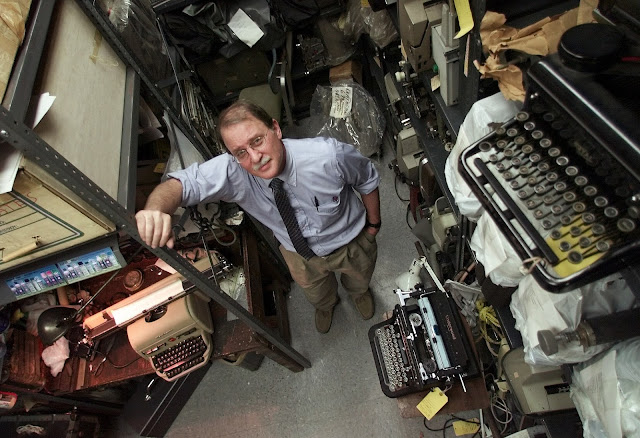 Peter in 2001
Peter also testified for the prosecution to help gain a conviction in a case that involved documents said to connect President John F. Kennedy to Marilyn Monroe and mobster Sam Giancana. A former paralegal at a New York law firm, Lawrence X. Cusack III, had defrauded $7 million from investors in a scheme to sell the fake documents. Peter told the court that the typewriter used to create the documents did not exist at the time they were supposed to have been written. Cusack was found guilty in 1999 and received a nine-year sentence. 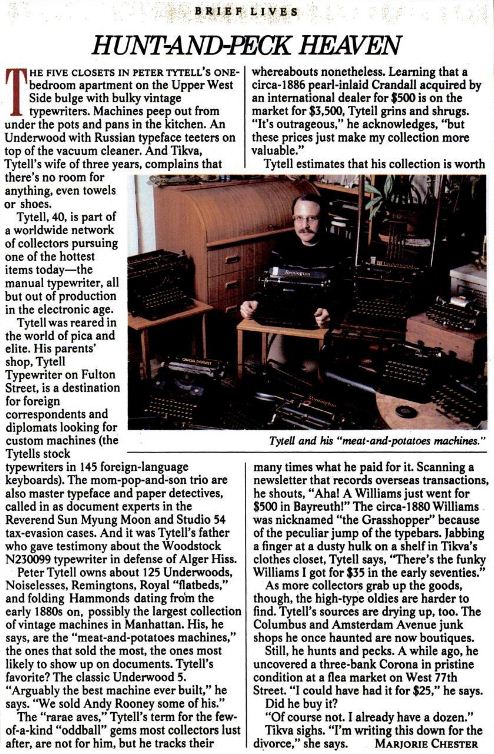 New York Magazine, January 20, 1986
Peter’s expertise was used in the investigation of the Killian documents controversy, which involved six documents critical of President George W. Bush's service in the Texas Air National Guard and the use of four of these documents, presented as authentic, in a 60 Minutes Wednesday broadcast aired by CBS on September 8, 2004. The programme, aired during Bush’s re-election campaign, reported that Bush had received special treatment in the early 1970s, and used memorandums said to be from the files of Bush’s squadron commander, Lieutenant Colonel Jerry Killian, to make its case. After the documents’ authenticity came into question, CBS convened an independent panel to investigate why the segment had been produced and aired so hastily, and asked Peter to examine the four documents. Peter told the panel the superscript “th” in the documents could not have been made by the Olympia manual typewriter used in the early 70s. The “th” of the Olympia was underlined and did not rise above the adjacent characters, unlike the “th” in the documents featured in the 60 Minutes segment. That, plus the proportional spacing and a typeface that closely resembled Times New Roman in Microsoft Word, led him to conclude that the documents were probably created on a computer unavailable in the early 1970s. Soon after the panel delivered its findings in early 2005, CBS fired a producer and three executives for their role in the segment. 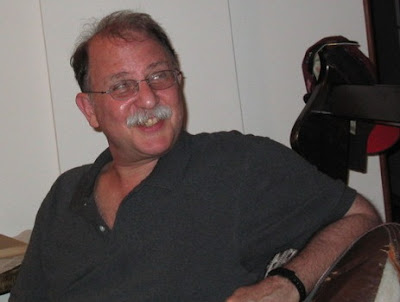 In 2011 Mark Zuckerberg, a founder of Facebook, asked Peter to examine a two-page work-for-hire contract that Paul Ceglia, a wood-pellets salesman, said entitled him to a substantial stake in the social media giant, which he sought in a federal lawsuit. Peter demonstrated that the contract showed unusual differences between the typefaces and spacing from one page to the other, suggesting that they had been prepared at different times. He also concluded that attempts had been made to age the pages artificially. A federal judge dismissed the lawsuit in 2014 on the grounds that the contract was a forgery. 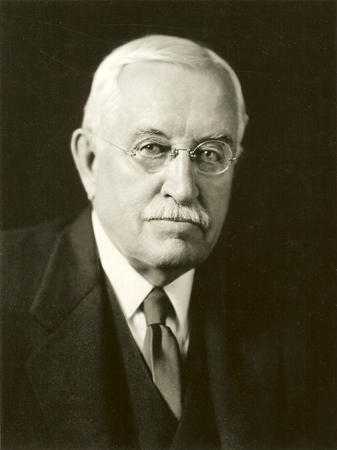 The inspiration: Michigan-born Albert Sherman Osborn (1858-1946) is considered the father of the science of questioned document examination in North America. His seminal book Questioned Documents was first published in 1910 and later heavily revised as a second edition in 1929.
This case was cited in 2017 when Peter was awarded the Albert S. Osborn Award of Excellence, which honours members of the  American Society of Questioned Document Examiners who have “contributed above what is expected of a society member.” The society said Peter “first darkened a courtroom door in 1971, and has testified many times ever since, both in US and international courts. He has testified in notable cases in Hong Kong, international tribunals, and has been involved in other high-profile cases such as Ceglia versus Zuckerberg. He has been retained by prosecutors, defence, plaintiff, and civil defence attorneys in thousands of cases. [Peter] is the last word in document examination for any cases involving typewriters or typewritten documents. He has always given his time and expertise to anyone who asks. He has maintained reference collections that are second to none.” 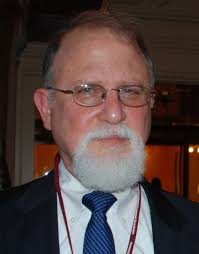 Peter in 2010
Those who have asked include me, in the case of a Corona 3 portable I bought on eBay from a New York deceased estate auction. I remain indebted to Peter for his help in that memorable matter. A truly wonderful typewriter man has left us. We are so much better for having known him, if only through emails and the like, and much the poorer for his passing. Vale Peter, RIP.

*I thank Bill MacLane of Palm Coast, Florida or alerting me to Peter’s death. 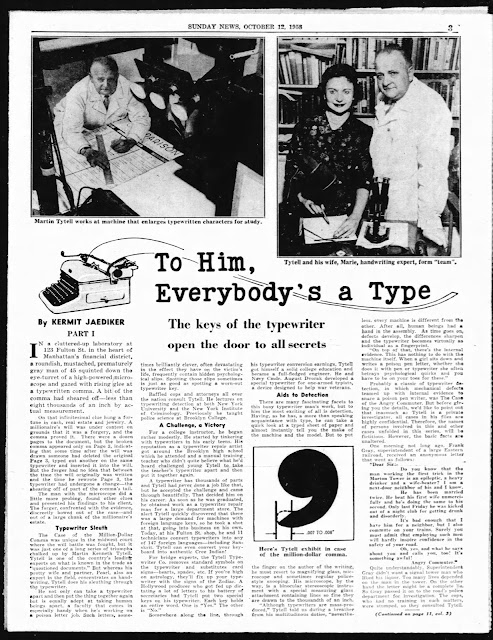 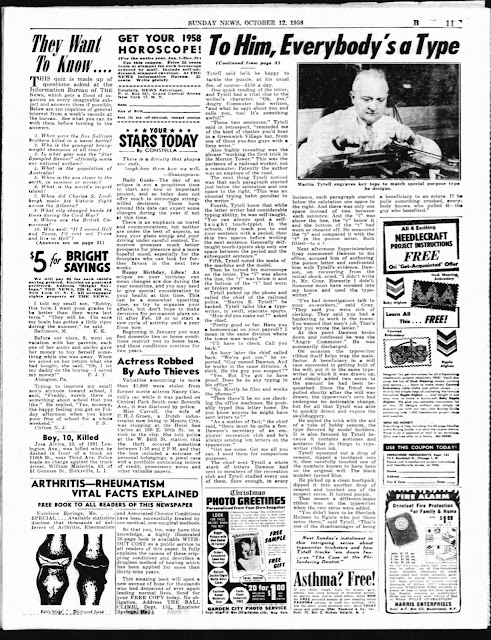 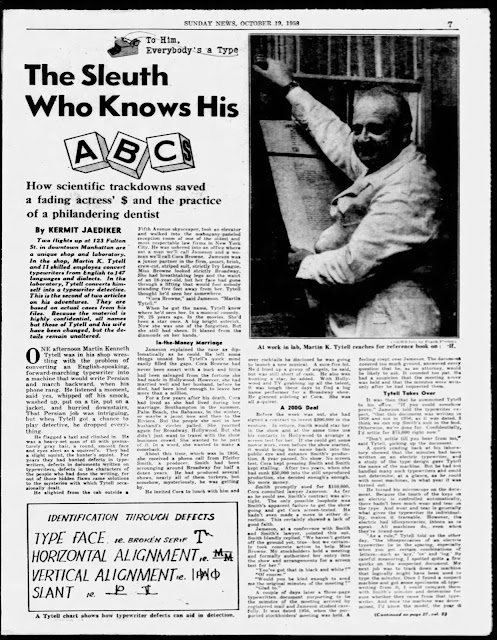 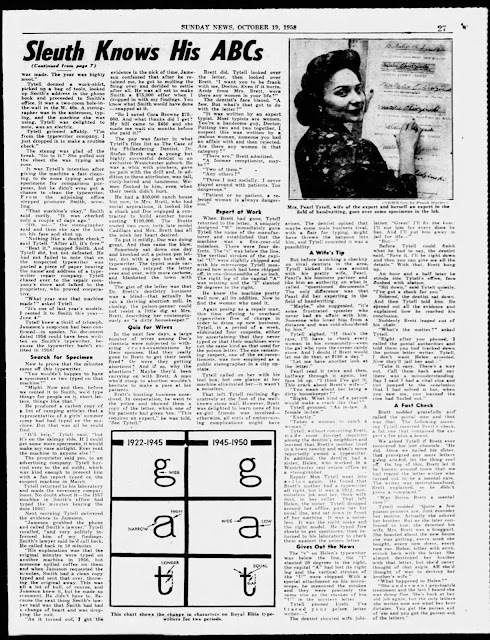 Peter was one of the greats, and even so, seemed to always have time to respond to an email.

Peter was also very helpful and polite with me on the occasions when I had a question for him. He was active on online forums and a respected and liked member of our community. He will be missed.

Lovely "Sunday News" images, the change of characters is a gem! Ciao! Davide