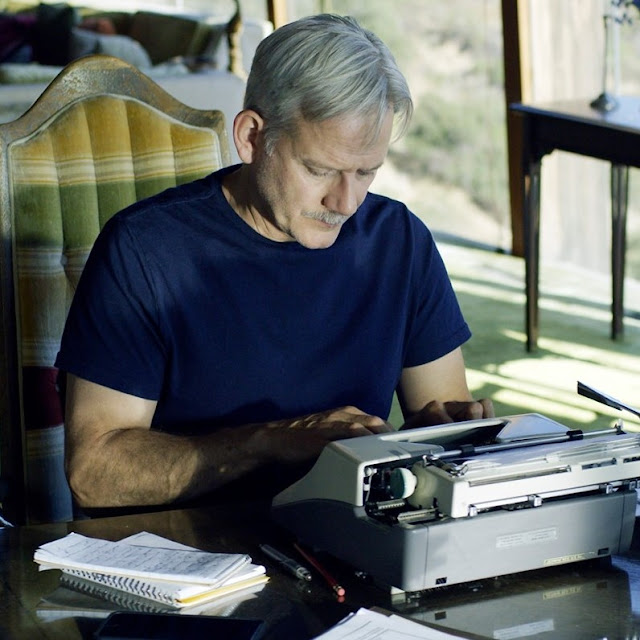 Campbell Scott at an Olympic SM8 portable typewriter in The 11th Green.
By an eerie coincidence, the week I read about Christopher Münch’s new science-fiction film The 11th Green I had lunch with a man who has in reality seen a UFO. I too have had a UFO experience, on the Nullabor in Western Australia in 1985, but that’s another story for another day. The one my lunch friend saw remains the world’s first verified film encounter with a UFO (sadly, I had no way of filming mine). 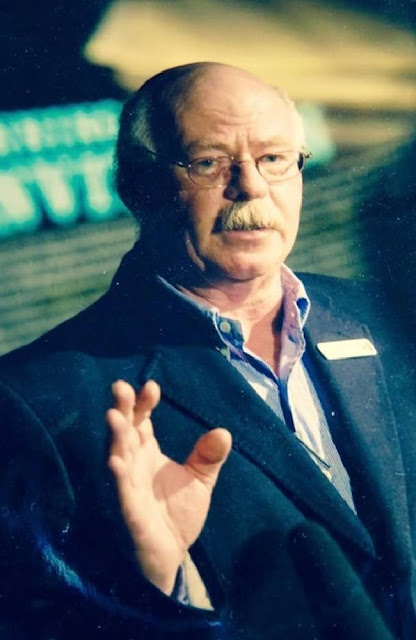 Dennis Grant
Dennis Grant, a hugely experienced Christchurch, New Zealand-born journalist now back living in Canberra, was one of the people on board Safe Air’s Argosy freight aircraft the Merchant Enterprise when they witnessed and filmed the UFO over the Kaikōura coastline in New Zealand in the early hours of New Year’s Eve, 1978. On March 26, 1979, at a press conference in New York City, a group of American scientists said the light sources captured on film could not be explained by conventional means. In 2008, US network NBC, on its Dateline program, declared the Kaikōura sightings as one of the top 10 UFO events ever. 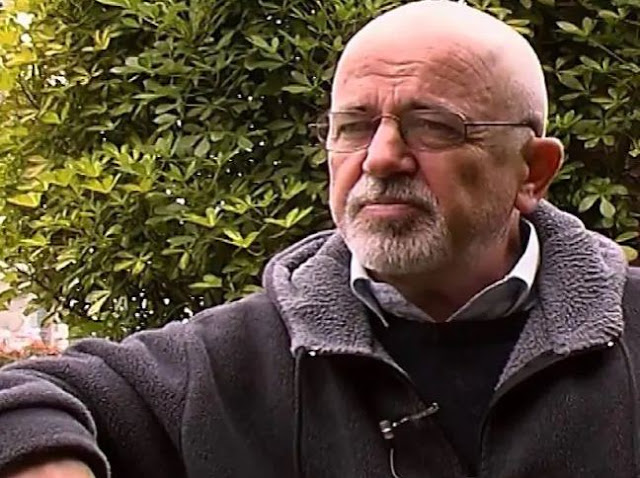 The late Quentin Fogarty
UFOs came up in our lunchtime conversation because a week or so earlier, a former close friend of Dennis’s, Quentin Edward Fogarty, had died in St Kilda, Melbourne, just as Codiv-19 was taking its deadly grip on the Victorian city. With Fogarty’s passing, the whole Kaikōura UFO episode briefly resurfaced. Fogarty became known worldwide in 1979 as the “UFO Reporter” and in 1982 wrote a book on the saga, Let’s Hope They’re Friendly, the 2014 updated version of which is available for free on Kindle on Amazon. 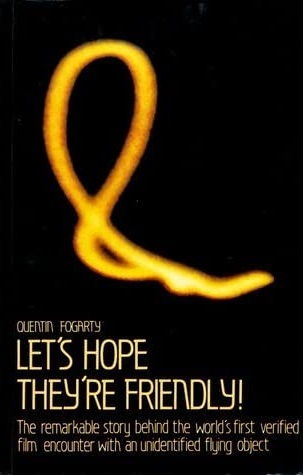 Naturally I was interested to hear Dennis’s take on the Kaikōura UFO sightings – and, of course, to find out what Quentin Fogarty had used to write his stories back in 1978. “A typewriter,” said Dennis. 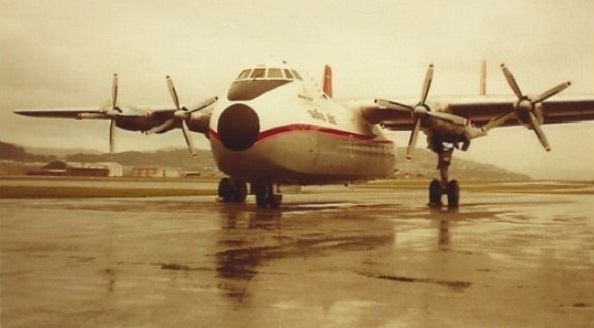 Safe Air’s Argosy freight aircraft the Merchant Enterprise
Fogarty was born in Dunedin, New Zealand, on September 28, 1946. He died on July 5, aged 73. He’d had triple bypass surgery a year earlier and had retired from a long and illustrious media career just a week before he died. Fogarty started his journalism as a cadet reporter on Dunedin’s Evening Star. He went on to work for newspapers in Australia, Ireland and England before trying his hand at radio journalism. Fogarty then went into TV news and current affairs. His television career started in Christchurch with South Pacific Television and continued in Australia at Channel Seven in Melbourne, Channel 10, SBS and Channel 9. He was the first person hired by SBS when it was established in 1980. Fogarty also ran his own production company for a time and his first documentary, the ABC’s Frontline Afghanistan, won a Logie for best documentary of 1984. 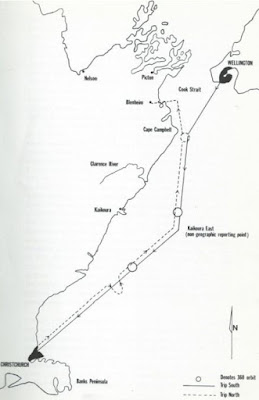 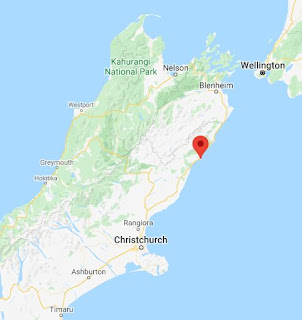 Dennis Grant has had an equally distinguished journalism career. He was a long-serving member of the Canberra Federal Press Gallery and was SBS's chief political correspondent. He had previously been with TV One (now TVNZ 1) in Christchurch and also worked for Channel Seven, as a spokesman for the Australian War Memorial and for Stuff NZ. When the UFO incident occurred, Fogarty was with ATV0 (now Ten) in Melbourne but in New Zealand on holiday and scheduled to stay with Grant and his wife Robyn in Christchurch. “I was a young journalist back then, fired with the zeal of telling stories untold, and I helped tell this story,” Grant later recalled. After an initial flight on the Argosy to film the UFO, Fogarty returned to Christchurch in the early hours of the morning of December 31, 1978, and it was Grant who provided him with more film for a second flight up the Kaikōura coast. “[They] had used up all the film in [the] 16mm camera,” Grant said. “Quentin called me sometime after midnight from Christchurch Airport to see if I could provide a fresh roll of film. I could - but there was a catch, I wanted to get on the plane for the flight to Blenheim.” The plane took off at 2.16am. About three minutes after takeoff, the group saw a bright, round light to the right. The aeroplane radar showed a target in the same direction about 18 nautical miles. 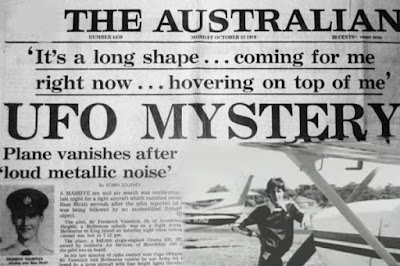 There was UFO fever in Australia at the time of the Kaikōura sightings. Two months earlier 20-year-old Frederick Valentich had disappeared while piloting a small Cessna 182 aircraft over Bass Strait, heading to King Island in Tasmania. Valentich informed Melbourne air traffic control he was being accompanied by an unknown aircraft. 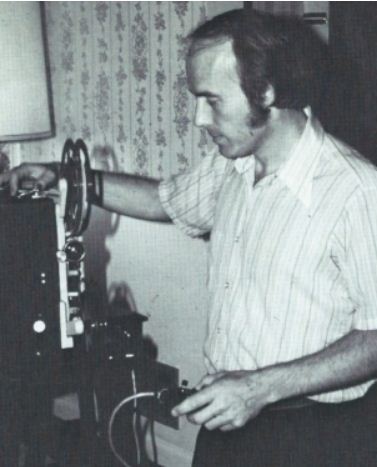 The Kaikōura film was taken to the US so Bruce Maccabee, above, an optical physicist who specialised in laser technology and worked for the US Navy in Maryland, Virginia, could study it. Maccabee came out to New Zealand and Melbourne to interview witnesses. He concluded the event involved unknown objects or phenomena fitting the definition of UFOs. 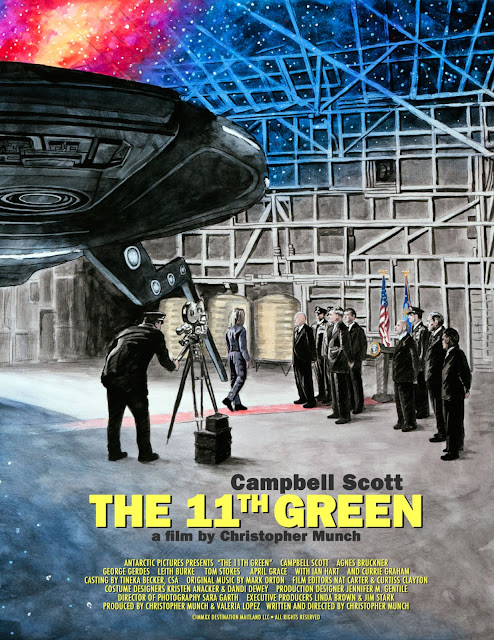 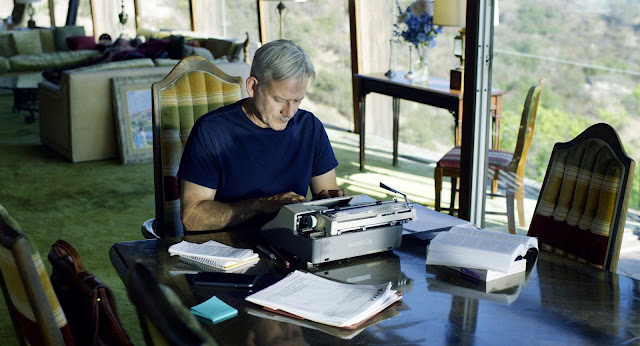 But back to the “wildly inventive” The 11th Green, which combines Münch’s “fascination with the real and the unreal”. “A respected journalist [Jeremy Rudd, played by Campbell Scott] uncovers the truth behind the mythology of President Eisenhower's long-alleged involvement in extraterrestrial events,” says the IMDb. The New Yorker said it was “a work of meticulous historical reimagination”. The movie starts with “a passive reaction to a fantastical sighting”, in much the same way as Fogarty’s film was first received. In this case it’s a monotone news report about preposterous technology. We’re told (by The New York Times) that “The 11th Green begins with a beguiling text stating that while much of what you are about to see is ‘necessarily speculative’, the narrative that follows represents ‘a likely factual scenario’ … While there’s a good deal of what feels like whimsy here, the movie’s overall disposition is a dark one. Its most crucial node lies in its depiction of the struggle and fate of James Forrestal, the secretary of defence in the first Truman administration, and the film’s dedicatee. The Forrestal scenes are meant to elicit shudders, and they do. More to the point, they make Munch’s questions stick.” 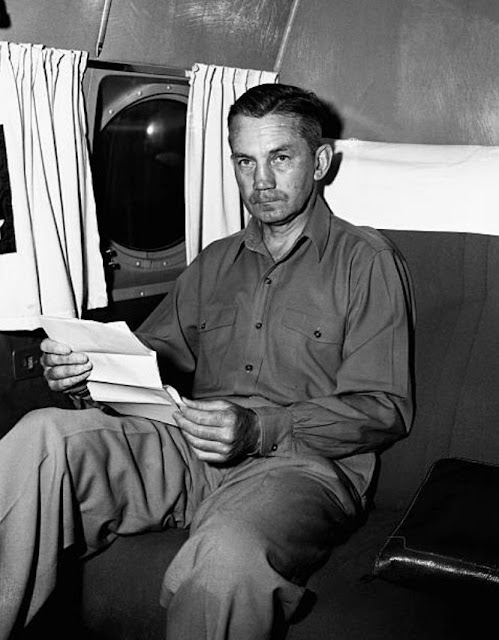 James Forrestal, who met a tragic end.
I’m not into conspiracy theories. But to understand this line, I guess, one needs to know about the theory that Forrestal was assassinated for the same reason John F. Kennedy was. It goes like this: “The key to unlocking the mystery of President Kennedy’s assassination and a possible UFO connection lie in events that occurred 18 years earlier in post-war Germany. In 1945 Kennedy was a guest of Forrestal [and] personally witnessed technological secrets that have still not been disclosed to the world. These secrets stemmed from extraterrestrial technologies that Nazi Germany had acquired and was attempting to use in its weapons programs. In searching for answers to who killed President Kennedy we need to start with the death of his mentor, Forrestal, in 1949. Forrestal was a visionary who thought Americans had a right to know about the existence of extraterrestrial life and technologies. Forrestal was sacked by President Truman because he was revealing the truth to various officials, including Kennedy, who was a Congressman at the time. Forrestal's ideals and vision inspired Kennedy, and laid the seed for what would happen 12 years later. After winning the 1960 Presidential election, Kennedy learned a shocking truth from President Eisenhower. The control group set up to run highly classified extraterrestrial technologies, the Majestic-12 Group, had become a rogue government agency. Eisenhower warned Kennedy that MJ-12 had to be reined in. It posed a direct threat to American liberties and democratic processes. Kennedy followed Eisenhower’s advice, and set out to realise Forrestal’s vision. The same forces that orchestrated Forrestal's death, opposed Kennedy's efforts at every turn. When Kennedy was on the verge of succeeding, by forcing the CIA to share classified UFO information with other government agencies on November 12, 1963, he was assassinated 10 days later.” 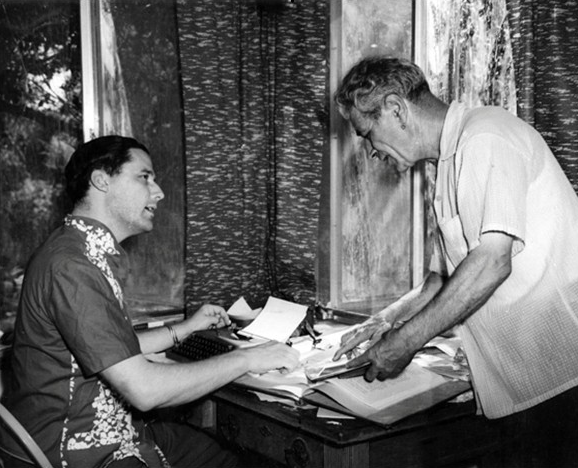 Desmond Leslie at his portable typewriter.


On the right is the infamous UFOlogist George Adamski.


Or so the theory goes in Kennedy's Last Stand: Eisenhower, UFOs, MJ-12 & JFK's Assassination. I’ll leave you to be the judge of that. What I’m more interested in is how UFOlogist Desmond Leslie reacted to news of the Kaikōura sightings. Leslie was a British pilot, film maker, writer and musician. A second cousin to Winston Churchill, he invented the multi-track mixing desk, flew Spitfires in World War II, was a pioneer of electronic music and wrote one of the first books on UFOs, Flying Saucers Have Landed (1953), which can still be found on the Wayback Machine. 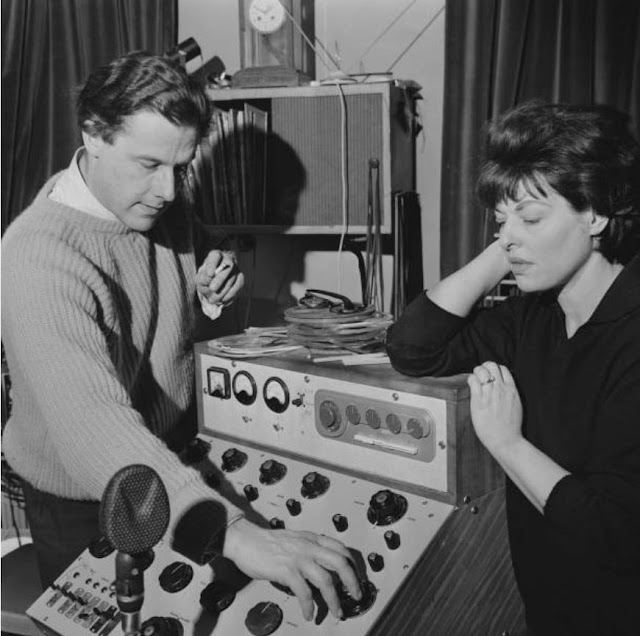 Leslie at his multi-track mixing desk in April 1963.
Leslie's co-author was the apparent con-artist George Adamski, a forerunner of Fogarty’s in that he claimed to have photographed spaceships. Adamski went much further, saying he had met friendly Nordic alien Space Brothers and that he had taken flights with them to the Moon and other planets. Adamski came Down Under in March 1959 and visited Scarborough Beach in Western Australia. He should have gone to the Nullabor to find UFOs. 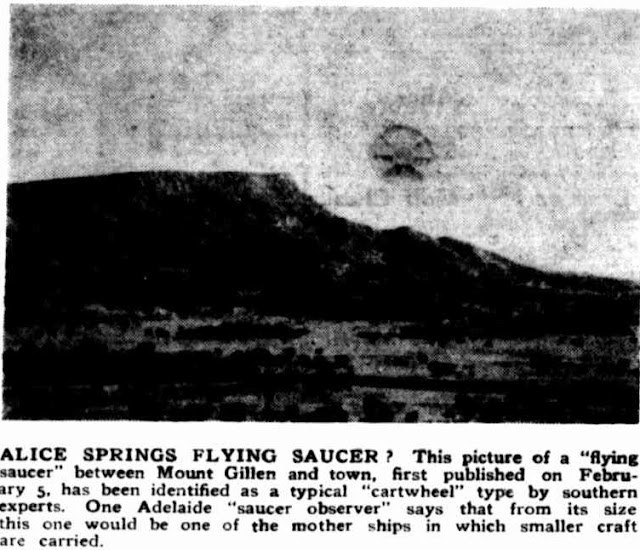 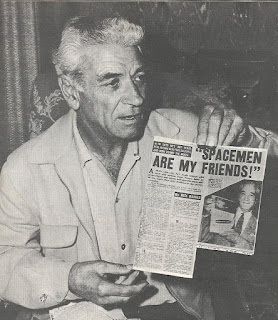 But getting back to the more interesting Leslie, who in the mid-1950s, at his family home Castle Leslie in Monaghan, Ireland, made a science fiction film with typewriter-loving astronomer Sir Patrick Moore called Them and the Thing. It was found in some vault, dusted off and re-screened at the Irish Film Festival in Dublin in August 2010. Leslie and Moore remained friends and co-wrote a spoof book in 1972, How Britain won the Space Race. In 2015 it was claimed that Moore had seen a UFO caught on camera while making a documentary in 1965 – but that the BBC had edited it out. Matt Lyons, an “alien researcher”, made the assertion during the 50th anniversary of the ‘Warminster Thing’ – so named after residents of the Wiltshire town began reporting strange noises and paranormal activity. Warminster was the site for a number of UFO sightings during the 1960s and 1970s. The first sighting was recorded by Arthur Shuttlewood on Christmas Day 1964 and he compiled a dossier of further sightings over the following year. 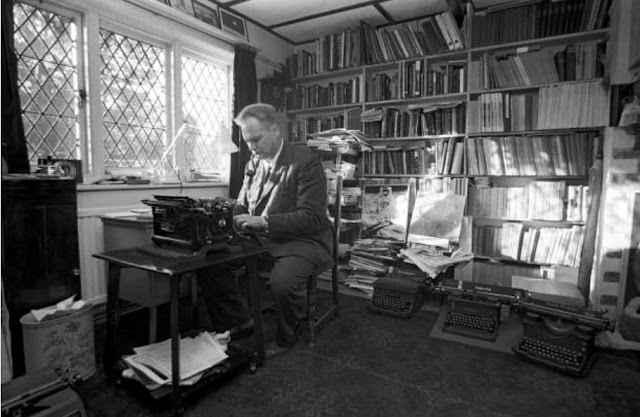 Patrick Moore with some of his 10 typewriters.
Posted by Robert Messenger at 15:23

I remember reading about some of the advanced technologies the Nazis either had or were developing. There was also a documentary on Nazi flying saucers (which are believed to never have left the ground) on PBS a few years ago.

I believe there will always be a UFO mystery.

Faascinating blog plus good typewriter pix. I am looking for the movie, The 11th Green, and ordered the book from Amazon. I also sent your blog to my Brother who loves these theories.

By the way, Campbell Scott is typing on an SM8 not an SM 9.