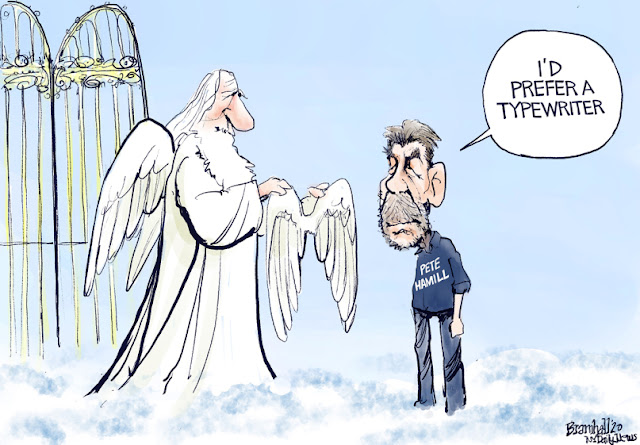 William Peter Hamill Jr, Brooklyn-born of Northern Irish Catholic parents, was a journalist, novelist, essayist and editor. Suffering from heart and kidney failure, he died on August 5 at the New York-Presbyterian Brooklyn Methodist Hospital, aged 85. Pete Hamill was described as “the author of columns that sought to capture the particular flavors of New York City's politics and sports and the particular pathos of its crime.” He was a columnist and editor for the New York Post and The New York Daily News.  Below is a tribute paid to him by his former colleague, Pulitzer Prize-winning journalist Jim Mulvaney*: 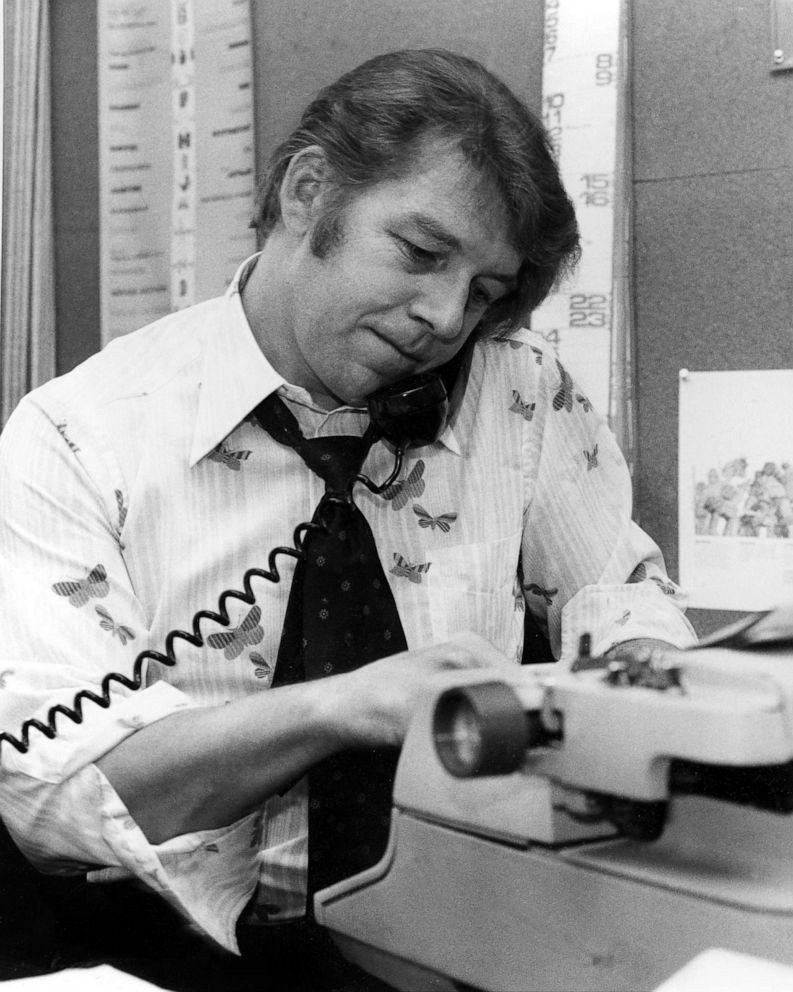 “Let’s get outta here,” Pete Hamill said as the 11 o’clock Daily News editors’ meeting ended on a March Monday in 1997.  It was my first day as Assistant Managing Editor for Investigations, a position Pete created as part of his strategy to try to save the dying newspaper.

He grabbed a jacket from his office, a fishbowl at the top of the newsroom, and slalomed through the maze of desks, scattering praise and greeting reporters by name. Their faces brightened.

Traditionally, Daily News bosses practiced management by intimidation and ridicule. Pete Hamill understood what it took to get a good story – he had published thousands – and was predisposed to trust reporters who worked the streets, and predisposed to be wary of second guessing editors who dared not leave their desks even for lunch, fearing they’d encounter something contrary to their insular view of the world.

Pete was a tabloid legend whose columns glowed with the voice of working folk. Hamill and his competitor, Jimmy Breslin, ruled New York journalism for decades. Breslin introduced America to Clifford Pollard, the 42-year-old who dug the grave for JFK for $3.01 an hour. Hamill narrated the final seconds of Robert Kennedy’s life, Pete walking backward through the kitchen of the Ambassador Hotel, describing the shots as “pap-pap-pap-pap-pap like a distant firefight or the sound of firecrackers in a back yard.”  Pete was one of the men who grabbed the killer, Sirhan Sirhan. “I wanted to break his face, to rip away flesh, to hear bone break as I pumped punches into that pimpled skin,” he wrote.

Hamill and Breslin were capable of turning a crime scene into a piece of art. Breslin presented facts in machine gun staccato. Hamill was musical, pounding his typewriter to a jazz beat borrowed from drummer Gene Krupa: “Lyonnaise potatoes and some pork chops, lyonnaise potatoes and some pork chops.” The music went through the keys and emerged on the newsstand as poetry.

The 1976 movie All the President’s Men changed journalism, attracting a generation of Ivy Leaguers longing to be Bob Woodward (actually yearning to be Robert Redford playing the reporter).

Jimmy and Pete were the link to old school journalism. Pete dropped out of an elite Jesuit high school to work as a sheet metal worker. Jimmy got a diploma from John Adams High School in Queens and resisted college in order to cover sports.

I did the Irish-American writer’s Stations of the Cross, moving to Belfast to cover the war and live as an abused minority. I was smart enough not to compete with my idols who had produced the essentials about life on the Falls Road, instead heading across the religious divide to the Shankill Road, mining the Loyalist stronghold for tales Jimmy and Pete hadn’t gotten.

Back in New York we rode the A train downtown, disembarked at Chambers Street for a short walk to one of his regular spots, the Odeon.

“What did you see, on the subway?” Pete demanded.

“Uhh, people aren’t as scared as before I left New York. Half the straphangers were reading, no longer afraid to lower their eyes.”

“Good. Didja notice what they were reading? Books, magazines, not a single newspaper. You know why? Because there’s nothing worth reading in the papers. If that doesn’t change, we’re goners.”

Pete had lured me home to New York from Southern California, where I’d worked as a hired gun for a newspaper looking to win big prizes for investigative reporting. Pete had the same idea. “People don’t want that crap, they want Jacob Riis, real reporting.”

Investigative reporting started with the muckrakers, notably Jacob Riis, who plied the mean streets of Manhattan, exposing abject poverty and mass corruption in an illustrated book called How the Other Half Lives. Pete believed it was the stuff that would make readers return.

Before I arrived at the Daily News Pete had cancelled the lone ongoing investigation – “Donna Watch” – a team of reporters assigned to full time surveillance of Donna Hanover in hopes of catching her cheating. “Donna Watch” was hatched under a previous editor as a favor from the publisher, Mort Zuckerman, to Mayor Giuliani.

“Does Zuckerman have the patience to let us succeed?”  I asked over coffee.

“We’ve got to take him at his word and hope for the best,” Pete replied. “I bumped into him last year on an elevator in the Washington Hilton, before the White House Correspondents dinner. He started to chat me up. We hopped off the elevator, someone pointed out Bill Clinton across the room. Mort approached Clinton but the president elbowed him aside. Bill shouted, ‘Hillary, look who’s here, it’s Pete Hamill.’ I thought Mort was going to melt away like the wicked witch.”

They were an unlikely pair. Zuckerman is a slight Canadian-born real estate tycoon who desperately wanted to be a bold name in a Liz Smith celebrity column. He dated Gloria Steinem, designer Diane von Furstenberg and Arianna Huffington. Smart ladies, but not the celebrity A-list of Hamill’s conquests: actress/dancer Shirley MacLaine, singer Linda Ronstadt and, most famously, Jaqueline Bouvier Kennedy Onassis. The widow of JFK, heir to the massive Onassis fortune, Jackie O, was the biggest name in celebrity dating.

Mort hired Pete with great fanfare, predicting the paper would rise like a Phoenix. Alas, Mort was incapable of letting Pete be Pete. We rode the subway north aware that we were living on borrowed time.

Our first investigation focused on the silent asthma pandemic ripping through working class neighborhoods. We took readers inside the emergency room at Lincoln Hospital during the hectic midnight shift, introducing them to terrified parents and wheezing children. Scenes directly from Riis.

Pete was long gone by the time we published, a victim of Zuckerman’s insecurities. The last straw came when Pete refused a direct order from the publisher to do a special section on the upcoming auction of the Duchess of Windsor’s jewelry at Sotheby’s.

“Mort doesn’t understand who our readers are,” Pete lamented. “The Daily News motto was ‘tell it to Sweeney’. Sweeney, all Sweeneys, are hard-scrabble Irishers who hate the Brits. This jewelry is blood money dating to the famine. Doesn’t Mort understand they don’t sell the Daily News on Park Avenue.”

I lasted longer than Pete but was bum-rushed out before my one-year anniversary by an editor who went on to a competing paper running a series on race, hiring actors because he didn’t trust reporters.

The last time I saw Pete was at a presentation at the Centre for Jewish History in September. He was sadly diminished, pushing a walker, battered by dialysis, his banter slowed but still thoughtful. He grabbed my right forearm with his left, delivering a hearty handshake. He said he was glad to see me, his blue eyes illuminated as an exclamation point.

*Jim Mulvaney led a team of reporters in California which won the 1996 Pulitzer Prize for Investigative Reporting. Mulvaney had written from 80 countries before his journalism career ended at the Daily News. He is now an adjunct professor in the law and police science department at John Jay College in New York City.
Posted by Robert Messenger at 15:48