An Oliver Twist: How Does a Patria Become an Oliver Byron? A Tale of Two Cities and Two Failed Typewriter Companies 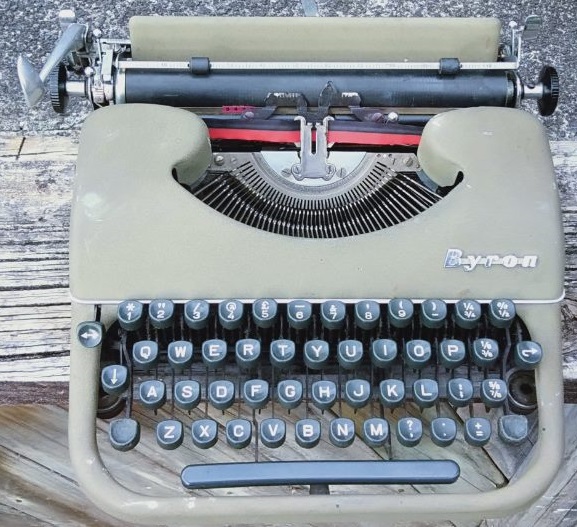 David Lawrence, New Zealand’s ‘Mr Typewriter’, now “on the road” since Eden Typewriters moved out of Mount Eden in Auckland at the end of last year, has continued to keep his finger on the pulse of the typewriter trade. David alerted me yesterday to an interesting listing on TradeMe, New Zealand’s more accountable equivalent of eBay. There, still at a starting price of $NZ35 ($US25, the bidding ends on Friday evening) is a Byron portable. 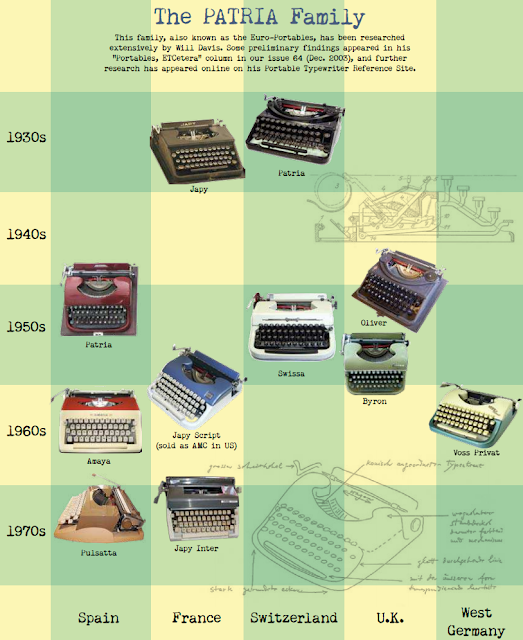 I recognised the machine straight away as part of the “Patria-Euro Portables Family”, but initially didn’t think I’d seen a Patria Byron before. Going back to the March 2010 edition of ETCetera magazine (No 89), however, to have yet another look at Richard Polt’s great spread on the Patria family tree, I spotted a Byron there. It may have been from the Thomas Fürtig Collection, I’m not sure. Further investigation showed there have been a couple more about for sale – one was sold by the Acme Type Machine Company for €525 (see below). Our old friend Georg Sommeregger has one on the Typewriter Database. Georg says “These were produced by Japy in Beaucourt, France, and sold by Byron Business Machines of Nottingham. Japy, in turn, had produced this model as licencee of the Patria rights holders based in Switzerland.” But there was another twist in this tale - an Oliver Twist! 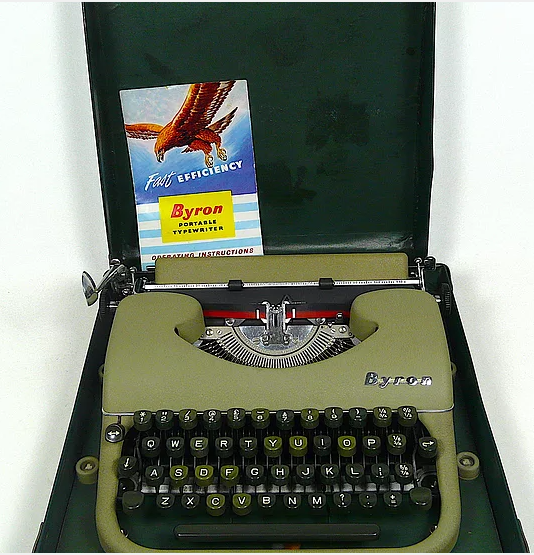 Over the years I have owned a very large number of these Max Bill-designed Patrias and their various offspring (in particular Oliver Couriers, Japys and Swissas). Being only too well aware of the connection between Patria-Swissa-Japy and the British Oliver Typewriter Manufacturing Company of 80 Gloucester Road, Croydon, Surrey, what interested me most about the Patria Byron is how it came to be rebadged, presumably by what started out in 1919 as the Bar-Lock Typewriter Company at Basford in Nottingham. It's such a good line I have to repeat it: there's an Oliver Twist in all of this. 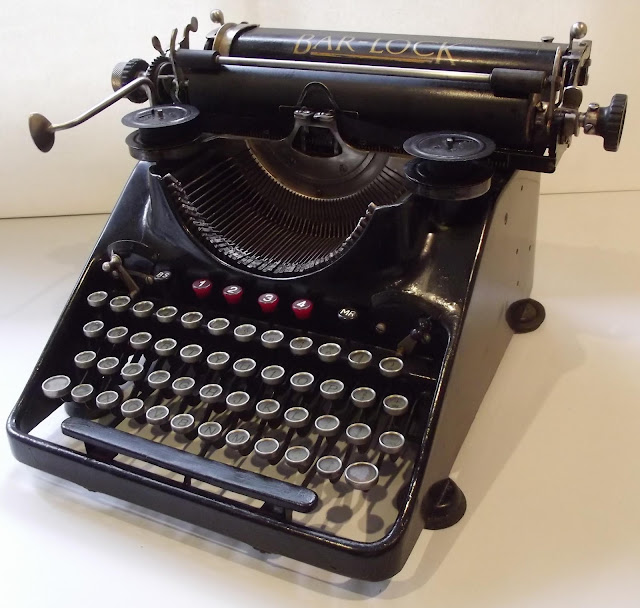 The Herbert Etheridge-designed Bar-Lock 16 of 1921
was the first machine produced by Bar-Lock in Nottingham.
William James Richardson, who established the Bar-Lock Typewriter Company in London in 1908 after buying all the patents, trademarks and tools of Charles Spiro’s Columbia Typewriter Manufacturing Company of New York, built the Nottingham plant in 1919, with his son Donald Richardson in charge of production. The Richardsons employed Herbert Etheridge, not long back from working for Kidder-Oswald Manufacturing in Dayton, Ohio, to design a conventional frontstrike typewriter to succeed the downstrike Royal Bar-Lock.  It was a creditable effort, but the British weren’t yet ready to buy British typewriters (and weren't until the Imperial 50 came along in 1927). So in late November 1924 Fuller, Horsey & Co were instructed to auction off the Richardson factory and the rights to make the Bar-Lock. 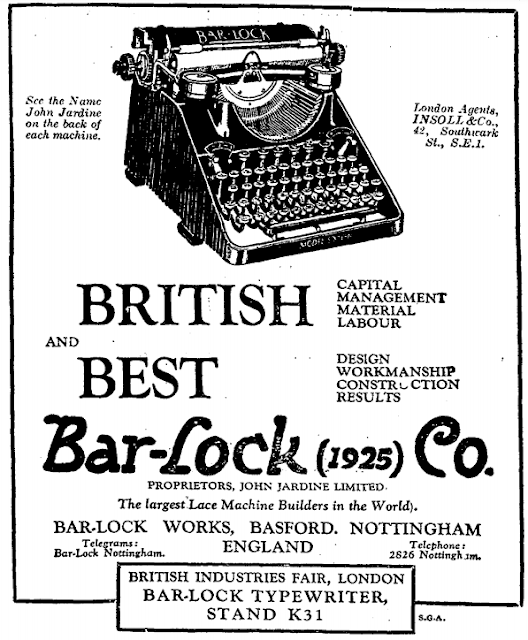 Same machine in 1926, this time made by the Jardines.
A new design didn't emerge until 1935.
The plant and the rights were snapped up by Ernest Jardine and a new company, called Bar-Lock (1925) was formed, moved into the Basford factory and started making the Etheridge-designed Bar-Lock. Ernest Jardine was the only surviving son of John Jardine, who had died in 1895, and it was in the goodwill-rich name of John Jardine Limited that the new organisation opened for business from the third week of February 1926. 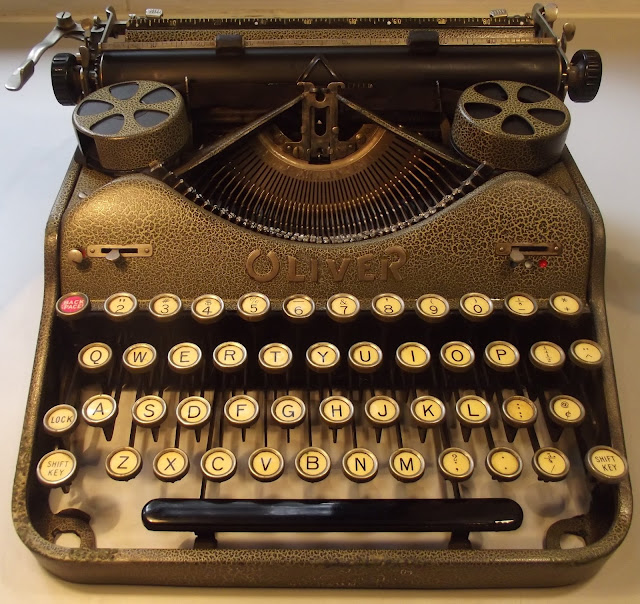 Almost 16 months later, on June 1, 1927, the Oliver Typewriter Company of Woodstock, Illinois, was sold to the British Oliver Manufacturing Company of Croydon in London. The buyer was American-born English businessman George Augustus Mower, who registered the BOTMC on May 5, 1928. While there were plans to expand the Victory Works on Gloucester Road, and some downstrike Olivers were made there, the BOTMC soon found that manufacturing typewriters in Britain remained the same nightmare it had been since the turn of the century. Mower struggled with a shortage of skilled workers and a lack of working capital. In 1931 the BOTMC started importing portable typewriters, starting with German Fortunas and moving on to Italian SIMs and finally the Swiss Patria models, all of which were relabelled as Olivers. It abandoned the downstrike Oliver standard in 1933 (some were made during World War II) and began to assemble relabelled Halda-Nordens from Sweden in 1935. The BOTMC returned to Haldas after the war while also licensing European companies, such as Siemag in Germany, to make Oliver labelled machines. 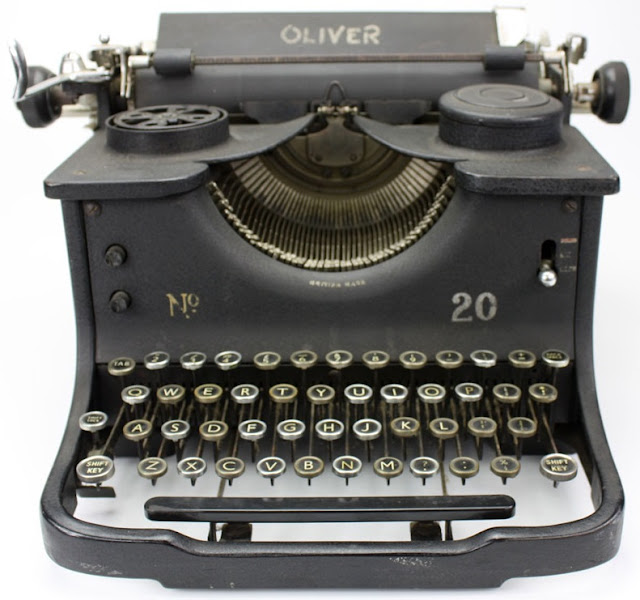 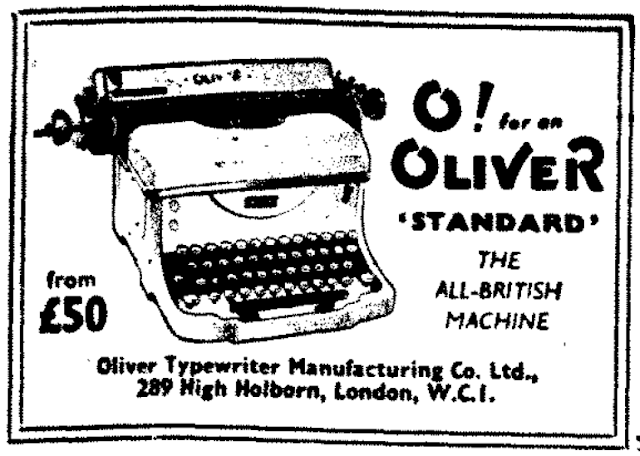 1956 Halda-Facit
The BOTMC suffered a massive £29,858 loss in 1956-57, providing for £38,177 in “obsolescence in stocks”, yet it still managed to reflect an expansion in its business by changing its name to Oliver Industries Ltd on April 8, 1958. In this it was following the example of the Bar-Lock Typewriter Company, which on August 11, 1953, had changed its name to Byron Business Machines (John Jardine Ltd). 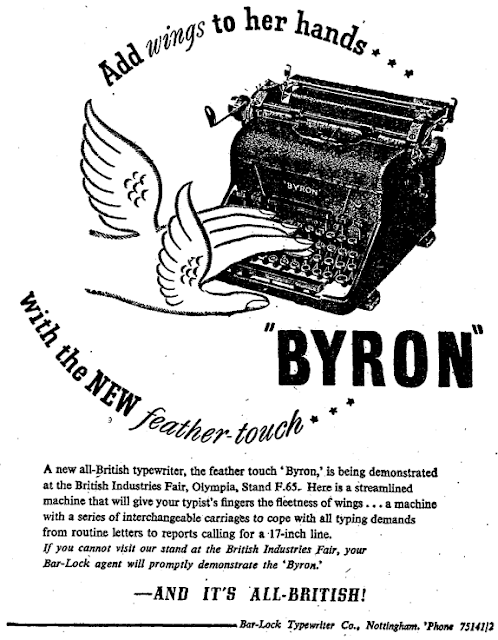 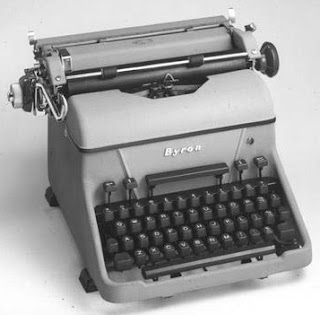 The name change worked better for Oliver in the short term than it did for Bar-Lock/Byron in the slightly longer term. The change to Byron from Bar-Lock coincided with plans to introduce a long-overdue, complete revamp of the Bar-Lock standard typewriter. The first Byron came out in 1952 (“with the new feather-touch”) but it was no more than a smarter-looking if merely upgraded Bar-Lock. This continued until 1954. At the Business Efficiency Exhibition at Olympia in London on June 6, 1955, “the new Byron, the world’s most advanced typewriter” was launched. It was called “A major revolution in design and construction” and its promotion claimed, “Nothing like the new Byron has been seen before – and it will be outstanding for years to come!” And here’s where the copywriters lost control: “The new Byron is the first typewriter which is entirely British in conception, design and manufacture.” Which was at least 60 years off the mark.

Rather than remaining “outstanding for years to come”, the new Byron lasted a mere 2½ years (the only one still in captivity that I know of is Richard Polt's). A fortnight before Christmas 1957, Byron laid off 325 Basford workers, two-thirds of the entire staff. The Nottingham company had staked everything on this beauty's success, and when it failed to take the market by storm, the shareholders raced for cover. Two months after Oliver had changed its name, on June 7, 1958, Oliver took over Byron Business Machines, and just three weeks later the Nottingham factory was auctioned off. One of the first things Oliver did was to rebrand some of its Patria portables as Byrons. 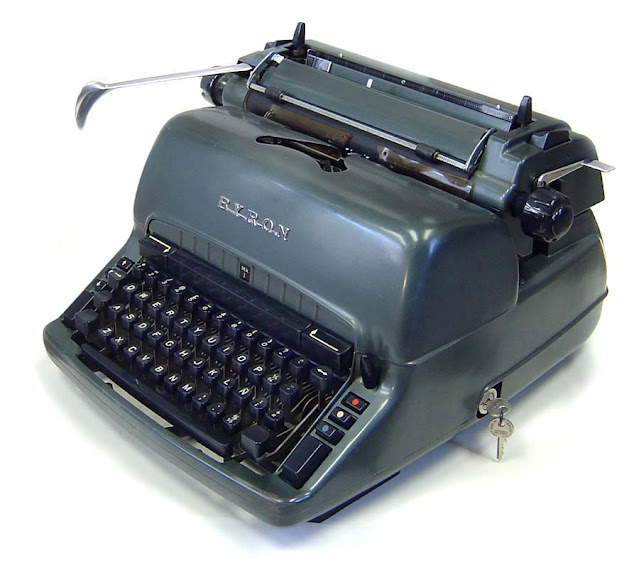 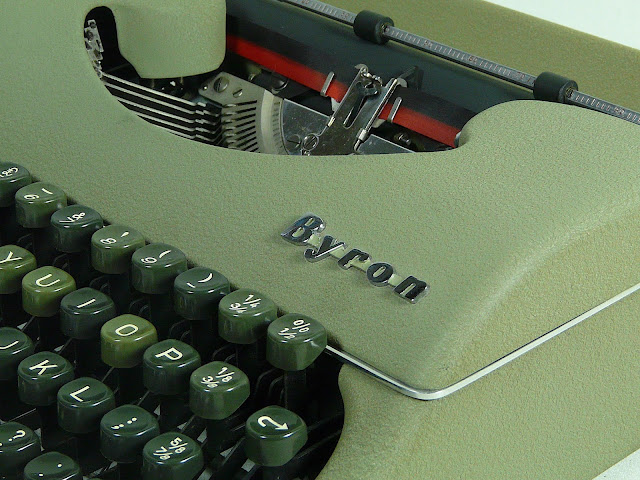 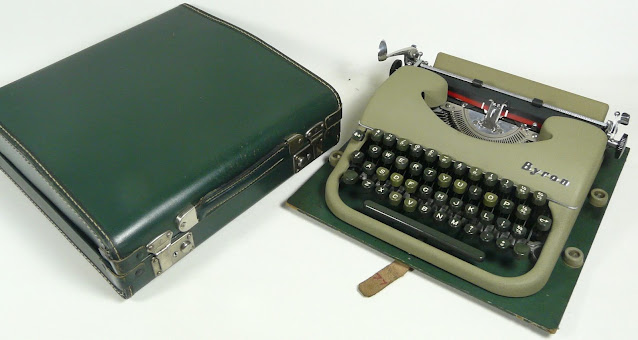 Oliver’s acquisitions resulted in a profit recovery to £28,109 by the end of 1958, but in July 1959 Oliver sold off its typewriter assembly plant and became hirers of domestic and industrial equipment. By the end of the 1959-60 financial year it had suffered a net loss of £85,646. On July 7, 1960, Oliver’s board called in the National Provincial Bank to appoint a receiver. Both Oliver and Bar-Lock/Byron had, in the space of two short years, gone the way of so many British typewriter manufacturers before them. And a little more than six years later, on November 7, 1966, they were to be joined by Imperial, taken over by Litton through its Royal Typewriter Division. But there was to be one last ray of sunshine, in Nottingham at least. On March 8, 1965, the John Jardine company which took the place of Bar-Lock/Byron, Petite Typewriters, received an order for 25,000 Victor Byers-designed toy typewriters, made at Dobson Park of plastic and nylon with an incey bit of metal. At 52oz it was a mere babe in arms compared to those mighty old Bar-Locks and the Byron. And at £7 10s, it sold at a fraction of the price of the real typewriters which had come from the Basford plant. For just this once, in one small niche, British-made typewriters had nosed ahead of their American and Japanese rivals. 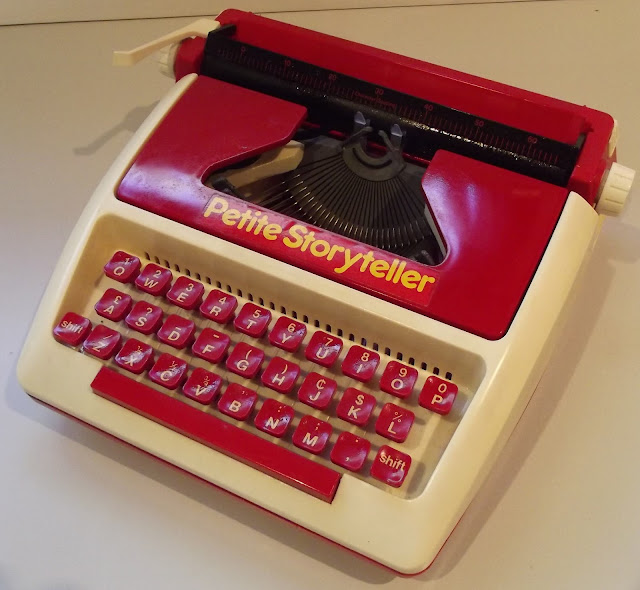 FOOTNOTE: But what's the story with this Voss, from Jett Morton's Oliver typewriter site? Anyone still believing British Oliver made its own portables should perhaps think again: 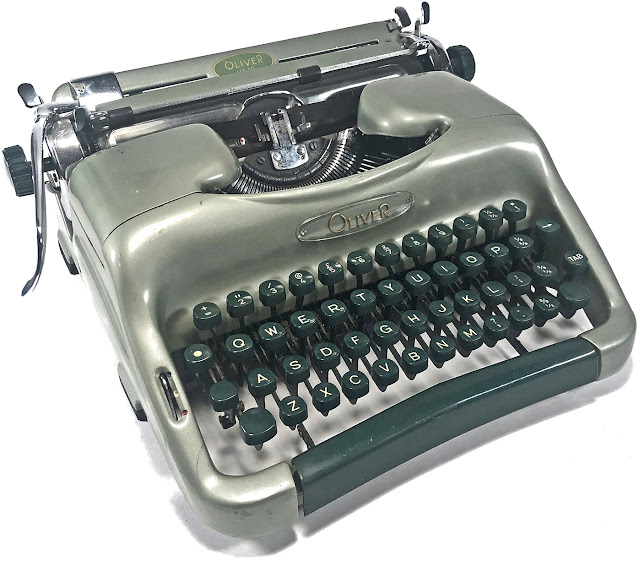 Posted by Robert Messenger at 23:20

Thanks for the history! Things get very confusing in typewriter world in the late '50s.

A tiny footnote is the existence of the Byron Junior (also known as Kamkap and Revere), the big Byron Mark I's baby brother:
https://site.xavier.edu/polt/typewriters/ByronJunior.pdf

Thanks for more great typewriter history, Robert.
I wonder how much Byron copied Underwood with the wings in their logo and giving words wings, and making words fly, and Finger-Flight and the like, in their advertising.

Thank you Robert for the history lesson.