Writers, Their Typewriters, and Their Work Space

In 2007-08, award-winning British photographer Eamonn McCabe took for The Guardian newspaper a series of pictures of the working spaces of writers. The writers contributed suitable words to go with the images. That is, except in the case of at least one, George Bernard Shaw, as the subject was 57 varieties of dead. But McCabe was still able to enter the writing hut at Shaw's Corner, Ayot St Lawrence in Hertfordshire, a National Trust property. And the Corona folding portable typewriter he found there was not, of course, anything like the typewriters Shaw actually used. Still, nine of the then living writers did own typewriters, even if some didn’t use them much. Here they are: 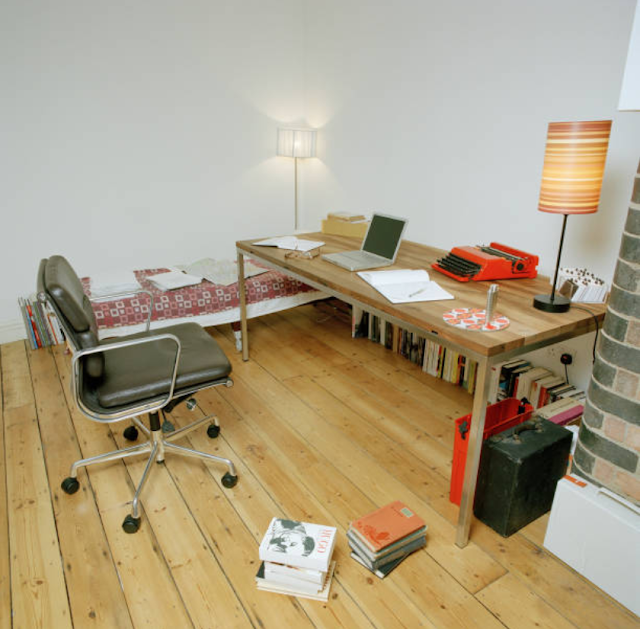 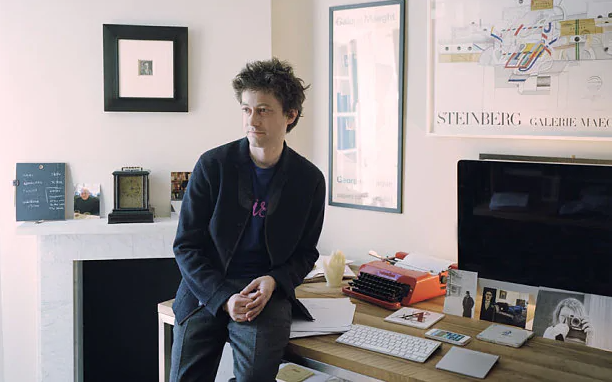 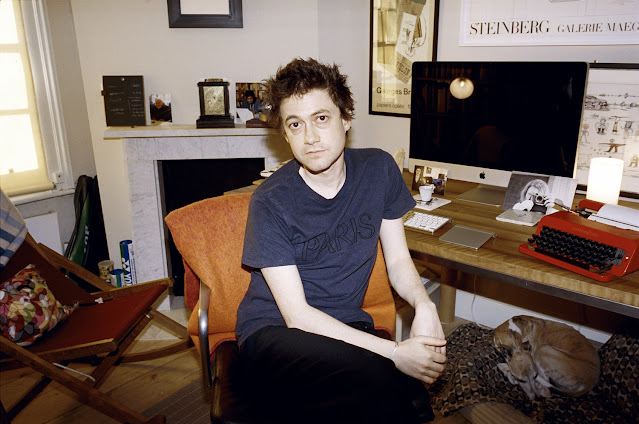 Adam Thirlwell (1978-), whose work has been translated into 30 languages. He has twice been named as one of Granta's Best of Young British Novelists. In 2015 he received the E.M. Forster Award from the American Academy of Arts and Letters. He is the London editor of The Paris Review.

“I'm surrounded, it turns out, by as many writing tools as possible: laptop, typewriter, notebooks, file cards, pens. I hadn't quite realised this multi-functional obsession. I tend to take notes on notebooks (always the same pens, the same notebooks). Some notes are copied on to file cards. At other times I just write straight on to the laptop - always distracted by my intermittent attention span and the temptations of the internet. The Olivetti [Valentine] typewriter on the desk was given to me by my girlfriend. I'm still trying to improve my typing to use it properly. Its matching red case is under the table - beside another portable typewriter (black): a Remington from the 1930s, which I bought in a flea market before I'd noticed that neither the W nor the cylinder [platen] worked. The original Remington advertising claimed that it was so light a child could carry it. This isn't true.” 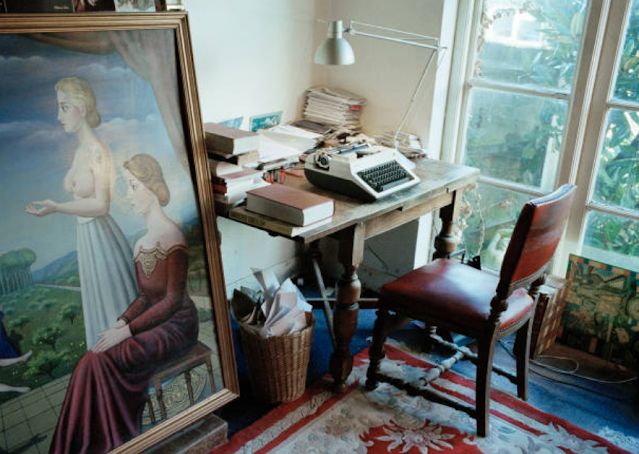 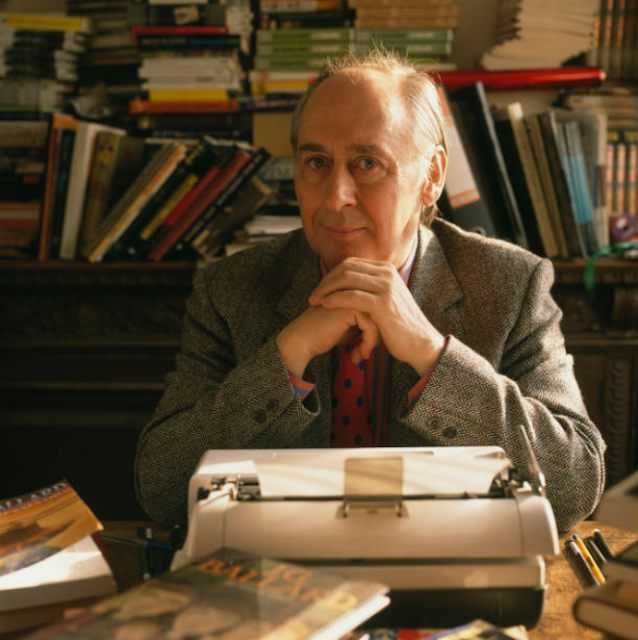 J.G. Ballard (James Graham Ballard, 1930-2009), who first became associated with the New Wave of science fiction for his post-apocalyptic novels such as The Drowned World (1962). In the late 1960s, he produced a variety of experimental short stories (or “condensed novels”), such as those collected in the controversial The Atrocity Exhibition (1970). In the mid-1970s, Ballard published several novels, among them the highly controversial Crash (1973), a story about symphorophilia and car crash fetishism, and High-Rise (1975), a depiction of a luxury apartment building's descent into violent chaos. He became best known for his relatively conventional war novel, Empire of the Sun (1984), adapted into a 1987 film by Steven Spielberg.

“On the desk is my old manual typewriter, which I recently found in my stair cupboard. I was inspired by a letter from Will Self, who wrote to me on his manual typewriter. So far I have just stared at the old machine, without daring to touch it, but who knows? The first drafts of my novels have all been written in longhand and then I type them up on my old electric. I have resisted getting a computer because I distrust the whole PC thing. I don't think a great book has yet been written on computer.” 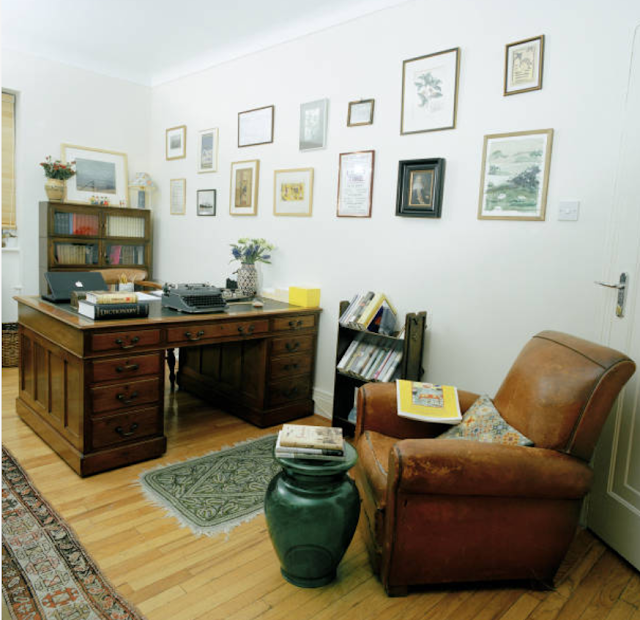 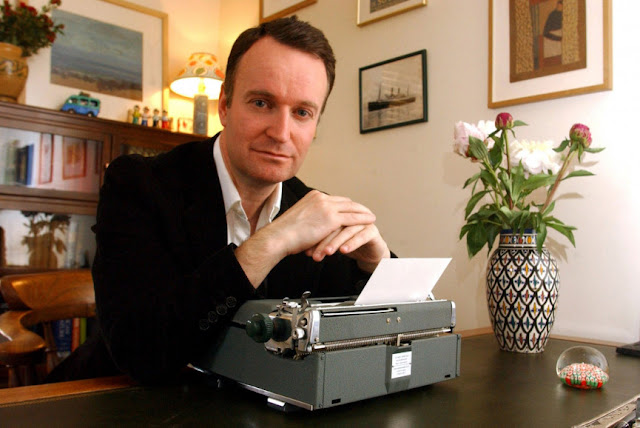 Andrew O’Hagan (1968-) is  an Editor-at-Large of the London Review of Books and Esquire Magazine and the Visiting Professor of Writing at King's College London. Three of O'Hagan's novels have been nominated for the Booker Prize for Fiction. He was selected by the literary magazine Granta for inclusion in its 2003 list of the top 20 young British novelists. His novels have been translated into 15 languages. His essays, reports and stories have appeared in London Review of Books, New York Review of Books, Granta, The Guardian and The New Yorker.

“I dragged the typewriter back from New York - I like the clacky noise it makes, and it's great for doing letters on because you can wind in a note card. The laptop is there for work but it's not online because I hate the idea of some boring email popping up while I'm trying to fix a paragraph. I do the internet elsewhere.” 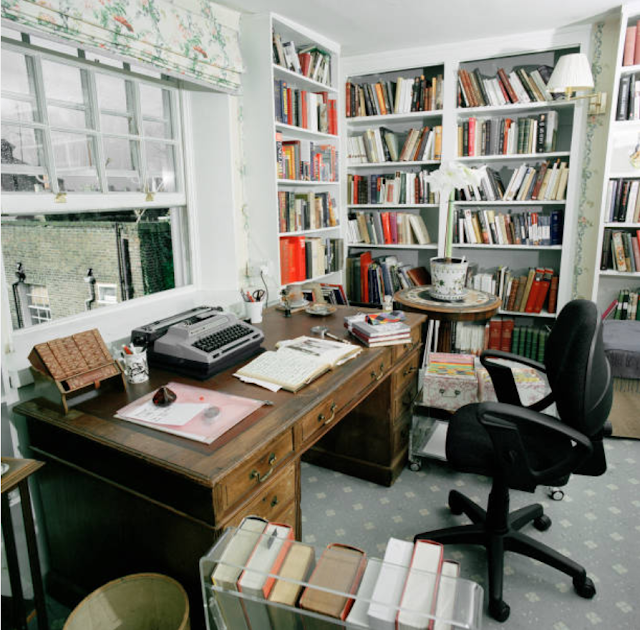 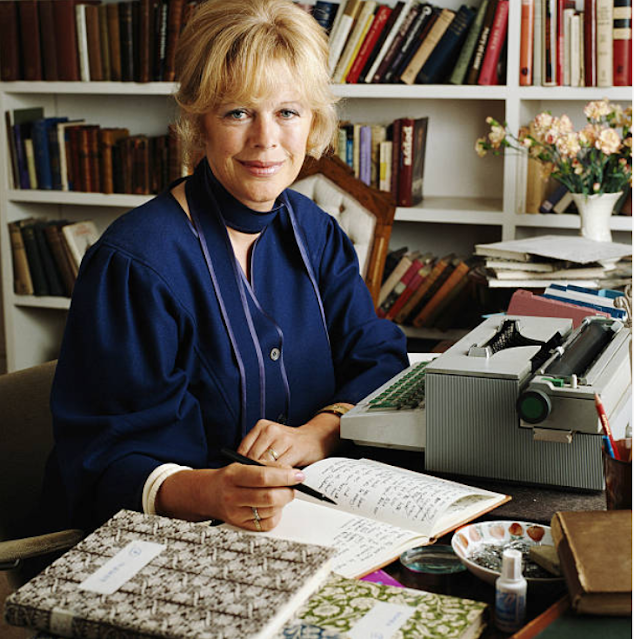 Antonia Fraser (Lady Antonia Margaret Caroline Fraser, 1932-) is a British author of history, novels, biographies and detective fiction. She is the widow of the 2005 Nobel Laureate in Literature, Harold Pinter; before his death she was also known as Lady Antonia Pinter.

“My typewriter is electric and so ancient that other typewriters have to be cannibalised when it needs mending. (The computer leads a separate existence downstairs.) I also use scissors and Sellotape to make corrections and insertions: it's a tactile thing.” 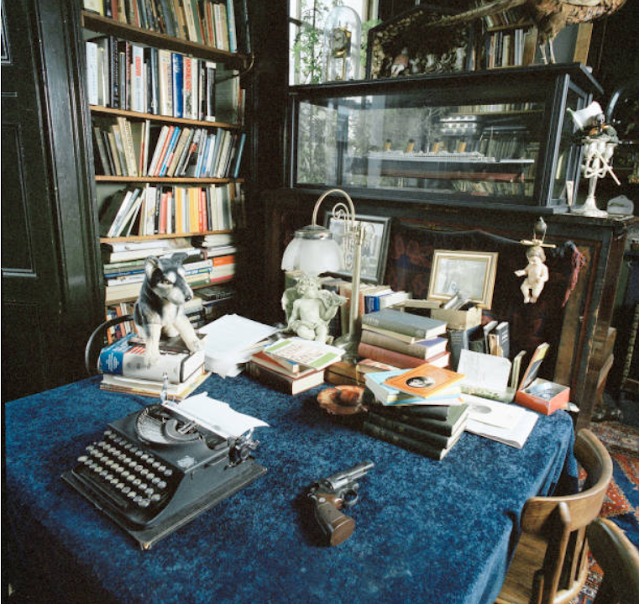 Beryl Bainbridge (Dame Beryl Margaret Bainbridge, 1932-2010) was primarily known for her works of psychological fiction, often macabre tales set among the English working class. Bainbridge won the Whitbread Awards prize for best novel in 1977 and 1996; she was nominated five times for the Booker Prize. In 2008, The Times named Bainbridge on their list of “The 10 greatest British writers since 1945”.

“I got the typewriter in 1958 from a Chinaman. You can't get them mended anymore so I have to be very careful with it. I do first drafts on it. It gives you more time, because it is so old you have to thump it, where a computer just races. I type it up on to a computer so I can correct it. Then it goes on to somebody who does it properly, because I can't spell.” 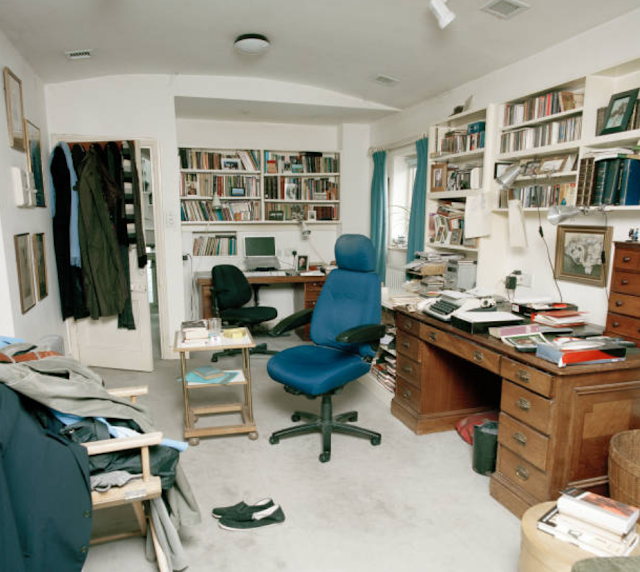 Simon Gray (Simon James Holliday Gray, 1936-2008) was a playwright and memoirist who also had a career as a university lecturer in English literature at Queen Mary, University of London, for 20 years. While teaching at Queen Mary, Gray began his writing career as a novelist in 1963 and, during the next 45 years, in addition to five published novels, wrote 40 original stage plays, screenplays and screen adaptations of his own and others' works, for stage, film, and television.

“ The desk with the typewriter on it is where I type the first drafts of my plays and write in long hand, on yellow pads, my diaries.” 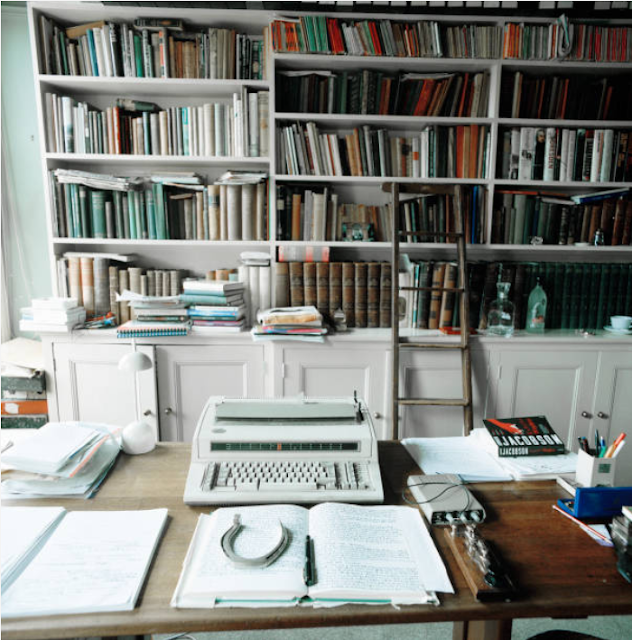 Alan Sillitoe (1928-2010) was one of the so-called “angry young men” of the 1950s, best known for his debut novel Saturday Night and Sunday Morning and his early short story The Loneliness of the Long Distance Runner, both of which were adapted into films.

“The typewriter might not be a word processor, but it can erase, which is all I need.” 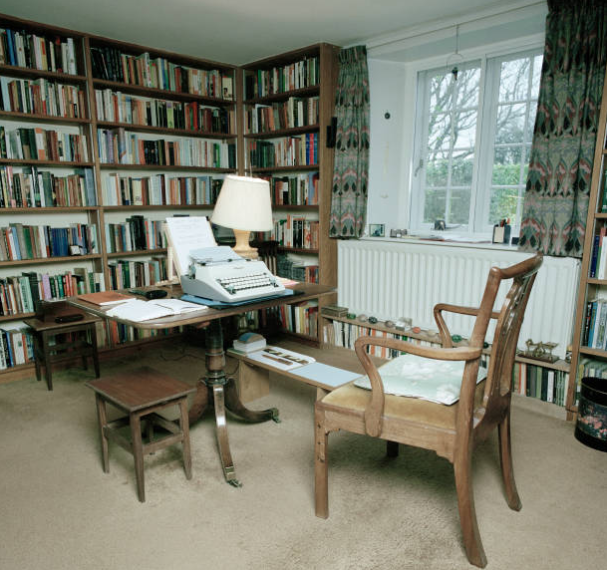 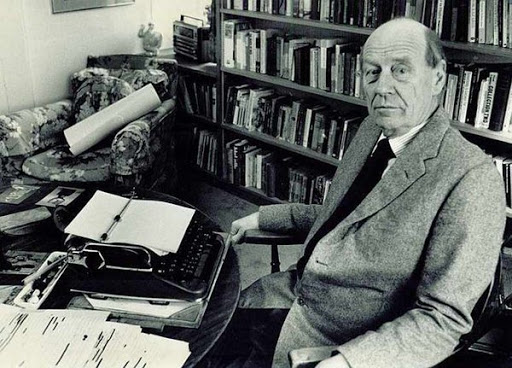 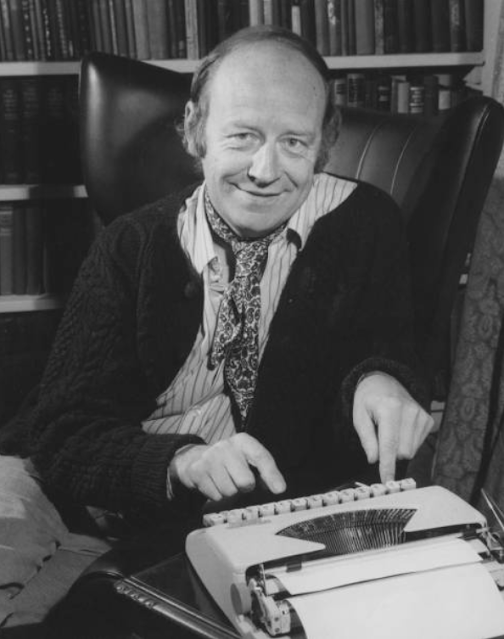 William Trevor (1928-2016) was an Irish novelist, playwright and short story writer, widely regarded as one of the greatest contemporary writers of short stories in the English language. He won the Whitbread Prize three times and was nominated five times for the Booker Prize, the last for his novel Love and Summer (2009). His name was mentioned in relation to the Nobel Prize in Literature.

“I write on blue paper, an affectation, on one of four Olympia typewriters, a German one, the best machine in the world.” 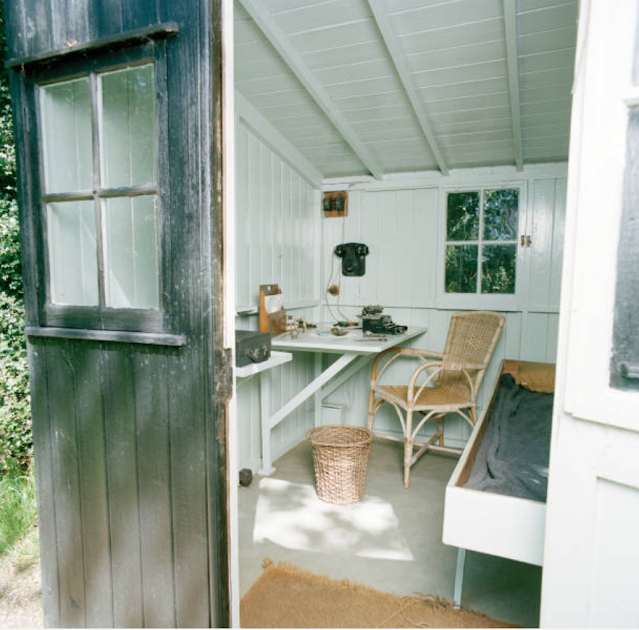 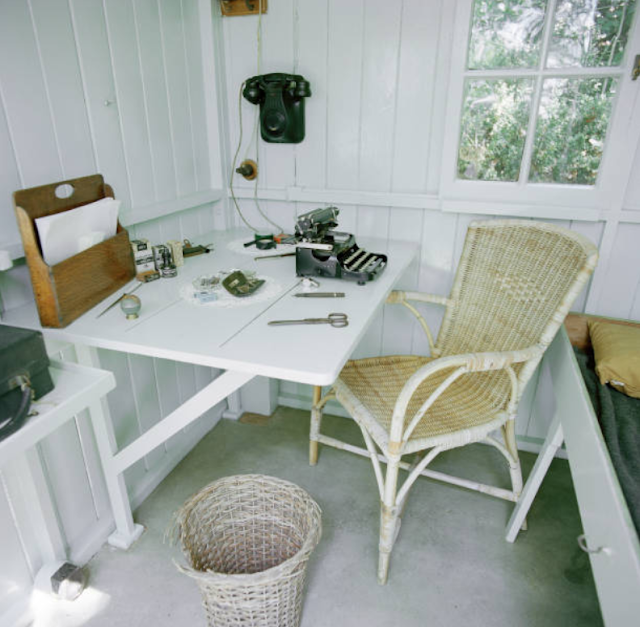 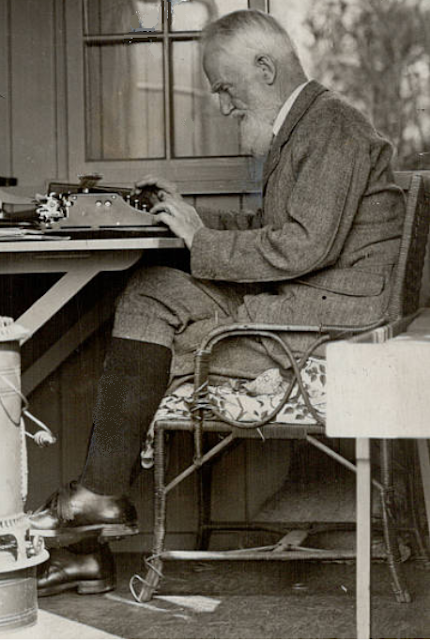 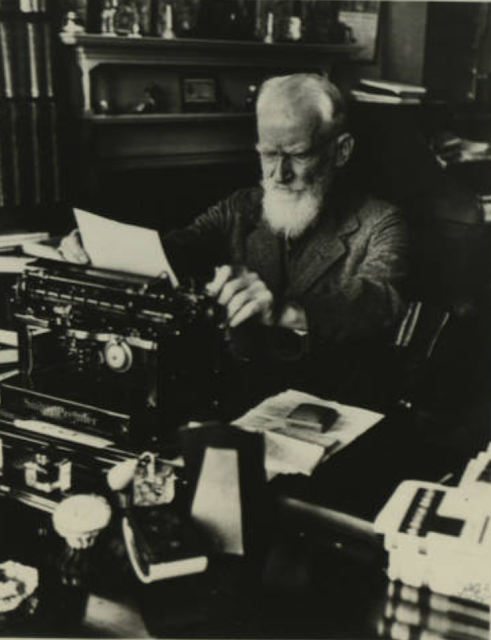 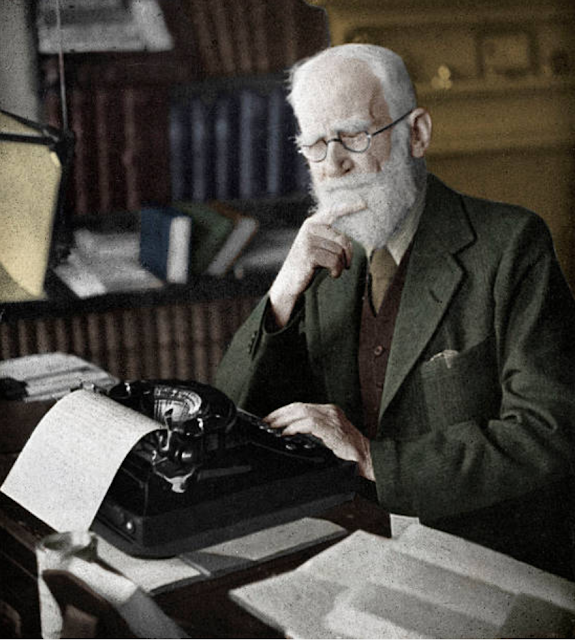 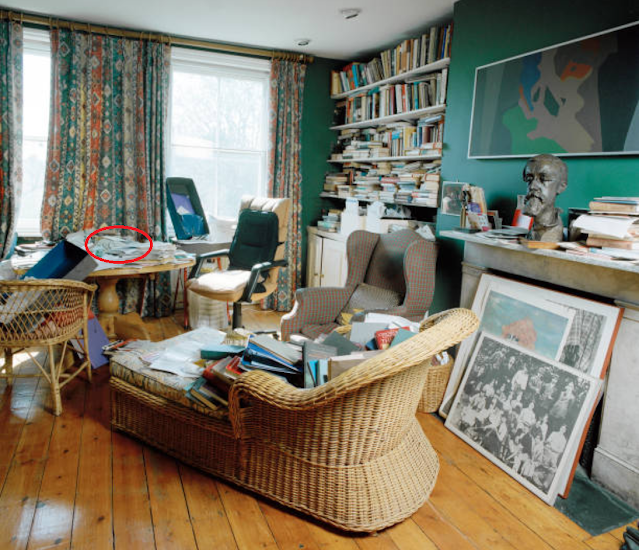 “Maggie, my wife, gave me a silver laptop in 2005 - it sits somewhere under an orange desk diary for that year in which I took down instructions on how to ‘get up a document’. There's no space for a printer and when the laptop gets too crowded with words I go to a shop in Notting Hill Gate where they print them for me. I still use my electronic typewriter for letters and lectures. But early this year I bought a new black laptop which lies somewhere under a pile of papers. It is, I'm told, capable of miracles. I haven't used it yet. I am waiting to be tutored by a young genius called Rupert. He is due any day now. After that I may be able to clear my room and sit under my Lynn Bushell abstract painting, not writing perhaps, but at peace.”

Posted by Robert Messenger at 14:13

It is always nice to see writers and typewriters.
Some new ones for Richard P.?

Great blog today. I to, follow the previous commentator in that I love the stories of writers and their typewriters. I also find their writing spaces fascinating.

Keep up the wonderful work, I enjoy every new blog.

Every bit as interesting as the typewriters various authors used in the past, are the spaces they chose to do their writing in. Great entry!

Why would Shaw not have used a Corona Folding?

More grist for my mill! Thanks.