As Good as it Gets - Ann Patchett’s Beautiful Typewriter Story: ‘She Thought I’d Given Her the Moon’ 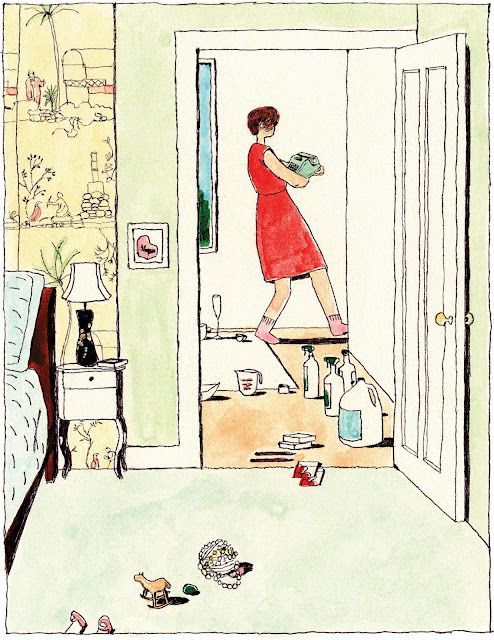 "What I had didn’t surprise me half as much as how I felt about it". Illustration by Karlotta Freier

A beautifully written 'Personal History' by Ann Patchett in the March 8 New Yorker, headed "How to Practice: Learning to Let Things Go", ends with a wonderful story about typewriters. The 'Personal History' itself is more than 5800 words long, but. cutting to the chase (for me at least), here are the last 1100 words:

My sister’s friend Megan and her eight-year-old daughter, Charlotte, came to visit as I was nearing the end of my project. Megan and Charlotte were driving a loop from Minneapolis to the Great Smoky Mountains and back, hiking and camping along the way. They were spending the night with my sister, and Heather brought them over to see me. By that point, I had only a little bit of the basement to go.

“I told Charlotte I’d show her your bathroom,” Heather said.

And so we went upstairs, the four of us. As Megan was walking by my office, she stopped. “Oh, Charlotte,” she said. “Come look at this. Come see what she has.”

The child walked into my office and immediately clapped her hands over her masked mouth to keep from screaming. I switched on the light. She was staring at my typewriter, a cheap electric Brother I used for envelopes and short notes.

“You have a typewriter!” Charlotte started hopping up and down.

“What she really wants is a manual,” Megan said. “We’ve looked at a bunch of them but they never work. Once they get old, the keys stick.”

There were two manual typewriters in the closet right behind us. One was my grandmother’s little Adler, a Tippa 7 that typed in cursive. She’d used it for everything, so much so that if I were to type a note on it now I’d feel as if I were reading her handwriting. I wasn’t giving the Adler away. I also owned a Hermes 3000 that my mother and my stepfather had bought for me when I was in college, the most gorgeous typewriter I could have imagined. I wrote every college paper on it, every story. In graduate school, I typed at my kitchen table in a straight-backed chair that my friend Lucy had bought at the Tuesday-night auction in Iowa City. Draft after draft, I banged away until my back seized, then I would lie flat on the living-room rug for days. A luggage tag was still attached to the Hermes’s handle—Piedmont Airlines. I’d brought the typewriter home with me every Christmas, even though it weighed seventeen pounds. Such was my love for that machine that I hadn’t been able to imagine being separated from it for an entire holiday vacation. The stories my mother and my sister had returned to me: they were all typed on the Hermes. 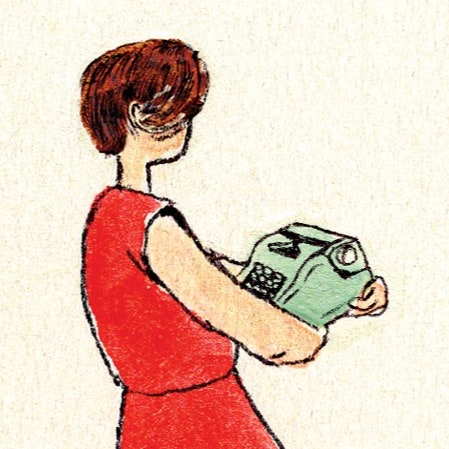 My mother and my stepfather, my darling Lucy, college, graduate school, all those stories—they made up the history of that typewriter. It waited on a shelf in the very closet where the dolls had been kept. When I was cleaning out the closet, I didn’t consider giving either of the typewriters away, but I don’t think I’d used them once since I got my first computer, when I was twenty-three. I took Megan aside. “I’ve got a manual,” I whispered to her.

She looked slightly horrified. “You don’t want to give that away.”

I told her that I’d sleep on it, that she shouldn’t say anything to Charlotte. I told her to come back in the morning.

I didn’t need the glasses or the silver, those things that represented who I thought I would become but never did, and I didn’t need the dolls, which represented who I had been and no longer was. The typewriter, on the other hand, represented both the person I had wanted to be and the person I am. Finding the typewriter was like finding the axe I’d used to chop the wood to build the house I lived in. It had been my essential tool. After all it had given me, didn’t it deserve something better than to sit on a shelf?

(Yes, I accept that this is who I am. I was thinking about what a typewriter deserved for its years of loyal service.)

In any practice, there will be tests. That’s why we call it a practice—so we’ll be ready to meet our challenges when the time comes. I had loved a typewriter. I had believed that every good sentence I wrote in my youth had come from the typewriter itself. I had neglected that typewriter all the same.

Kent, the cosmic monk*, had laminated his prayers. He’d laminated pictures of his daughters, his granddaughter, his dog. He’d laminated good reviews of my novels. After he died, Tavia found two laminated cards. One said:

e needed both prayers in order to remember. We had tried the world on for size, Kent and I, and, one way or another, we would figure out how to let it go.

I took the Hermes down from the closet shelf, unsnapped the cover, and typed I love you iloveyou. The keys didn’t stick. I looked online to see if replacement ribbons were available.

They were. I watched a video of Tom Hanks, that famous champion of manual typewriters, replacing a ribbon on a Hermes 3000. “No typewriter has ever been made that is better than a Hermes,” he said in a salesman’s voice.

Well, that was the truth.

That night, while Karl and I were walking the dog, I told him about Charlotte. I told him what I was thinking. “As much as I loved it, it would be wonderful if someone could use it. How many little girls are out there pining for manual typewriters?”

I had forgotten. I had given Karl an Olivetti for his birthday when we were first dating, because I was used to dating writers, not doctors. Because I didn’t know him then. Because I saw myself as the kind of woman who dated men with manual typewriters. I had bought it new. Twenty-six years later, it was still new.

Abraham looked up and there in a thicket he saw a ram caught by its horns. He went over and took the ram and sacrificed it as a burnt offering instead of his son.

O.K., it wasn’t like that. But I had been ready to let the Hermes go, and now I didn’t have to let it go. There was another typewriter caught in the thicket.

When I gave the Olivetti to Charlotte the next morning, she thought I’d given her the moon. She had imagined herself as a girl with a typewriter. And now she was. 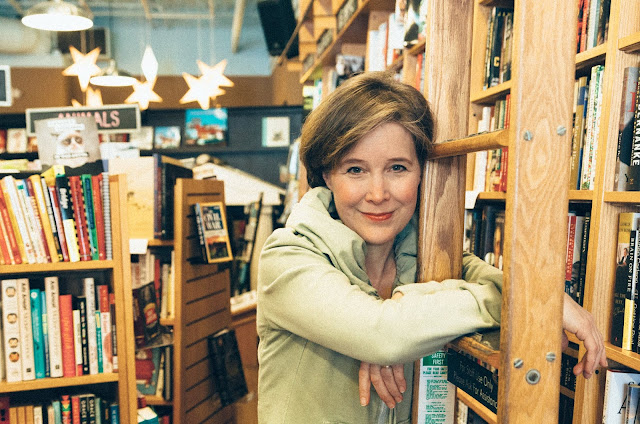 *Kent is the late father of Tavia, Ann's friend from early childhood. He's an inveterate gatherer of weird things. 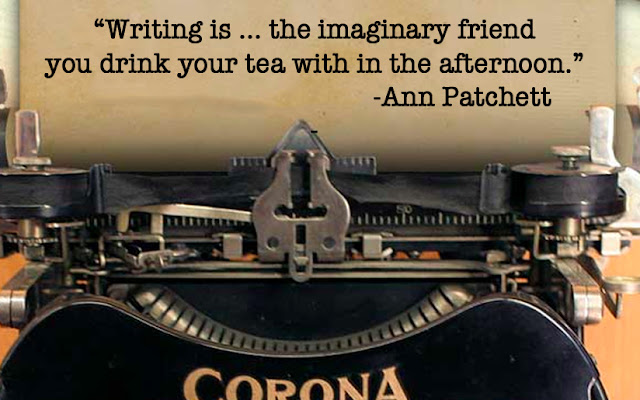 Posted by Robert Messenger at 08:57

When I saw the artwork at the beginning of that article I thought "Great. It is a typewriter story." as I read it I was a bit disappointed -- until I neared the end where the typewriter
was featured. It turned out to be a nice story after all.

Fantastic, thanks for sharing!

Again a wonderful story, I too have shared the feelings of gifting a typewriter and know the feelings of parting with my significant machines. I must admit I don't give those away. I do let my great nephew, to whom I have given 2 typewriters, type on any machine he likes at the dining room table.

Thank You for a great story about Ann Patchett and her gift to a young typist in waiting. I just read--and then had to own Patchett's book of non-fiction essays, speeches, and magazine pieces entitled, "This Is the Story of a Happy Marriage." Her fiction is very entertaining. Her essays, especially her comments on writing, friendship, marriage, divorce, etc., deeply, and sometimes painfully, insightful. As a fan of the Hermes 3000, it is nice to think that she developed her craft on her beloved typewriter. Her allusion to the story of Abraham and Isaac was perfect! Who would have thought an Olivetti caught in a thicket? Was it a 32, something later? I wonder. Thank you for sharing this gem of a story that leaves us wanting more. Your oz.Typewriter is always interesting, entertaining, and informative. May you long have the energy to continue!

“How many little girls are out there pining for manual typewriters?” Lots!