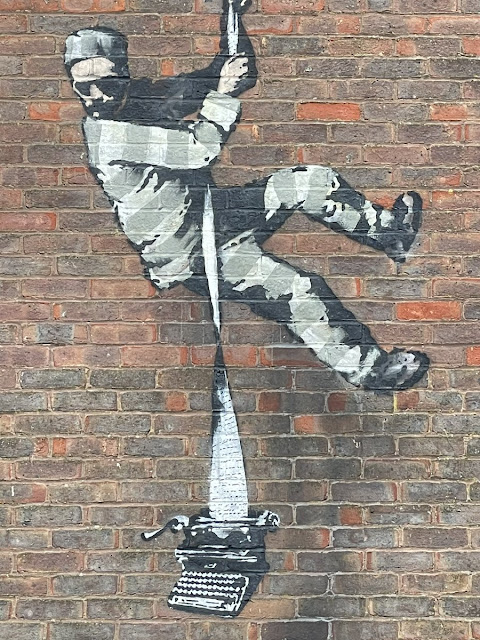 An artwork bearing the hallmarks of famous British street artist Banksy has appeared on the side of Reading Prison. The picture shows a prisoner - possibly resembling famous inmate Oscar Wilde - escaping on a rope made of bedsheets tied to a typewriter. Campaigners have been fighting to have the former jail turned into an arts hub rather than sold off for housing. Banksy, "guerrilla artist", has not yet claimed credit for the work but an expert said it did "appear to be a new Banksy". The jail famously housed Oscar Wilde between 1895-97 and was immortalised by his poem Ballad of Reading Gaol during his stay, which reflected on the brutality of the Victorian penal system. He was convicted after his affair with Lord Alfred Douglas was exposed. The prison has been derelict since 2013 and was put up for sale by the government two years ago. However, a deal to sell the Grade II-listed building to developers fell through last year and Reading council said it hoped to revive its bid to turn it into an arts complex. Hollywood actors Sir Kenneth Branagh, Natalie Dormer and Dame Judi Dench are among the stars who have lent their support to the campaign. Banksy expert and vice-chancellor of Arts University Bournemouth, Professor Paul Gough, described the artwork as "pretty compelling" and said the quality of the painting suggested it was done by someone "who knows how to paint and has got a lot of practice at painting up a scaffold in the dead of night. At the moment it would take a good copier to get that right."

Discussing the artwork's message, Gough said: "It's possibly a comment on the prison's potential use as an arts centre, but the fact that it's got a typewriter and that it's all about paper and writing might be some sort of commentary on what's happening with news media and Facebook."

Vince John, from the 1loveart gallery in Bristol, which sells urban and street art, said. "I believe this is an example of Banksy's street work at its best, being both humorous and politically poignant. A great piece of work and a brilliant social commentary." The art curator said he thought it referenced Oscar Wilde and could be a "nod of encouragement for the use of the building as a cultural and arts centre ... now it has its crowd-puller and star exhibit to get things moving in the right direction".

Posted by Robert Messenger at 08:43

It's better to have an arts center than a prison.
Also great is that the artist worked a typewriter into his painting.

I think it's inspiring and an effective bit of symbolism, whoever created it.

Banksy has confirmed that he created this piece.