How Typewriters Liberated the Child Genius for Winifred Sackville Stoner 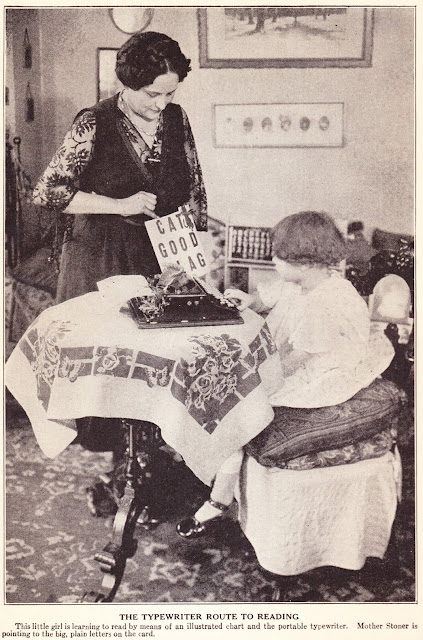 It’s almost a century since the innovative educator who called herself Dr Winifred Sackville Stoner told Brooklyn journalist Laura R. Wilkie, “Take Tommie’s toy soldier away from him and give him some building blocks instead – or better still a typewriter – and there will be no war to curse him when he has grown to be a man.” I dare say her advice would be even more stringent if Dr Stoner was still with us 100 years later, though there are far fewer typewriters and more violent action toys around now than there were in 1921. Yet there are, today, many of us who would, all this time later, totally agree with Dr Stoner that typewriters are “liberating”. And she was as good as her word – regularly playing in a “rhythmic orchestra” in 1927, in a “Royal, Rhythmic, Rhyme and Reason” series of broadcasts from WEAF’s New York radio studio, using a typewriter as her instrument (way before the Boston TO). 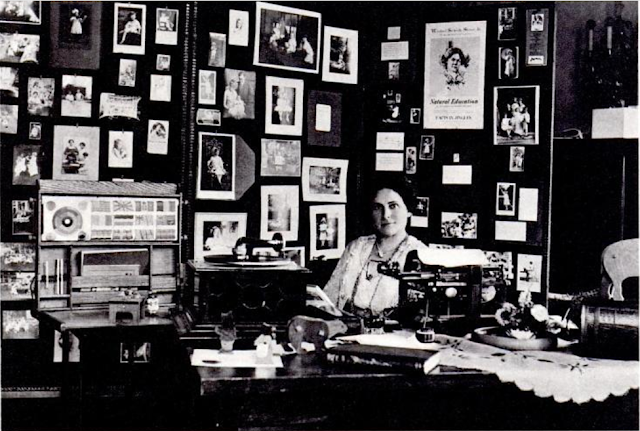 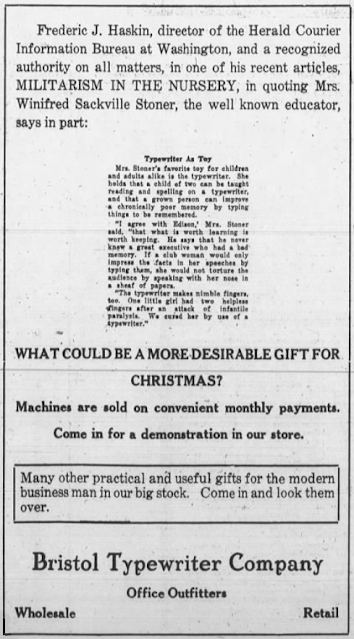 Dr Stoner explained to Wilkie (and others, such as widely syndicated journalist Frederic Jennings Haskin), “The typewriter can be mastered by the average child of two years of age, because the tapping of the keys requires only a direct muscular action, which is within his or her powers. Also, in old age, the typewriter can be used long after the cramped fingers and lack of coordination between mind and muscle have made it impossible to write with the pen.” Dr Stoner went on to claim that “Little children whose fingers have been partially palsied through infantile paralysis have been able to learn to tap the typewriter keys according to [her methods], and to them the exercises meant a return to muscular strength as well as play to an education purpose. At five years of age, because of familiarity with the typewriter thus acquired, and the ease with which she [Dr Stoner’s “gifted daughter”] had memorized both vocabulary and correct grammatical forms,” her daughter “was able to type little compositions of her own, which, moreover, were published”. At nine, the daughter, Winifred Diane Sackville Stoner, had passed college entrance examinations for Stanford University and the University of Wisconsin, Madison, and at 12 spoke seven languages. “And it was only through the use of the typewriter that this rapid development was possible,” her mother stressed. 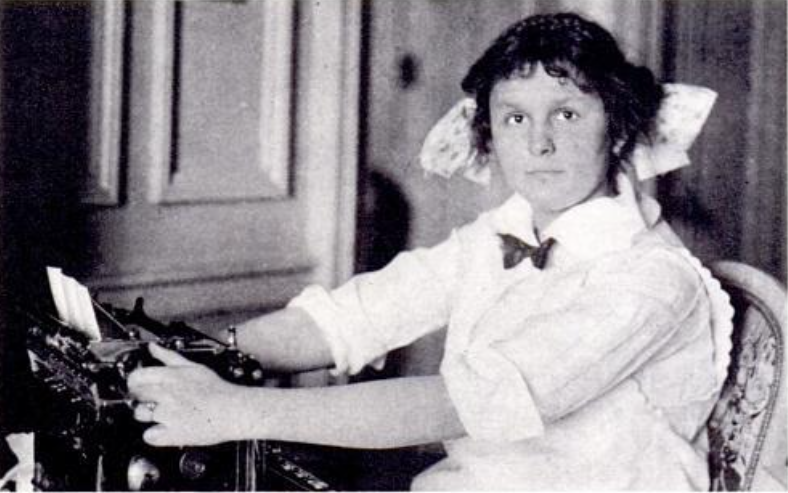 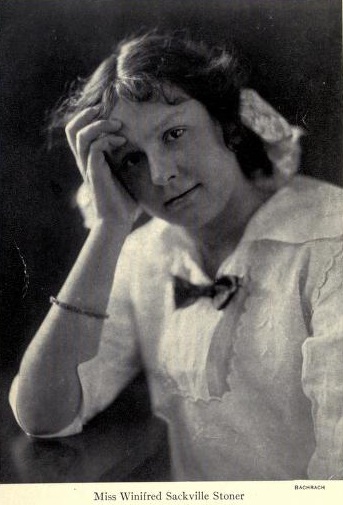 All praise to these capabilities of the typewriter, I say, but whether such remarkable early advances in development did little Winifred Jr any long-term good is another matter. Winifred Sr once said that mothers were potters and their children clay, and in the case of Winifred Jr the pottery at first glistened but began to crumble later. Winifred Jr was 19 at the time her mother was interviewed by Laurie R. Wilkie, and it is true that Winifred Jr was at that time still regarded as having been a prodigious poet and a child prodigy. 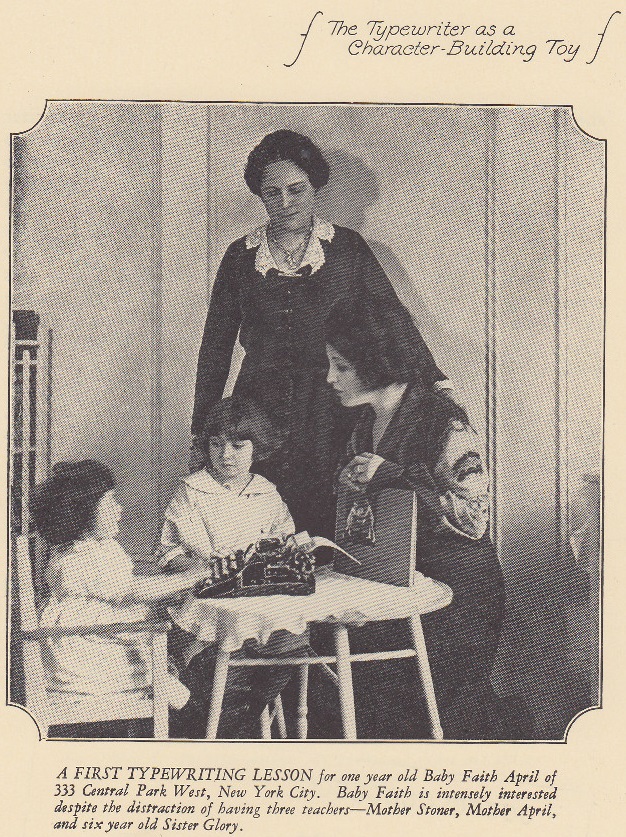 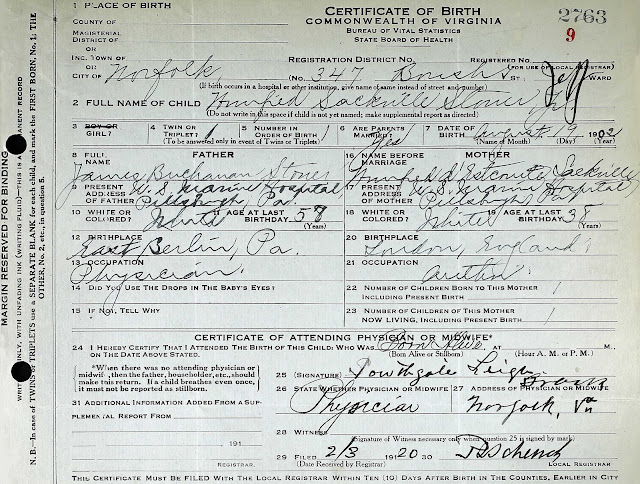 Winifred Diane Sackville Stoner Jr was born on August 19, 1902, in Norfolk, Virginia (there are claims about Evansville, Indiana, but the 1910, 1920 and 1930 US censuses confirm Virginia, not to mention her birth, above, and death certificates). She was her mother’s only child, yet Pauline Winifred d'Escourte Stoner (née Sackville) was to become known to the whole nation as “Mother Stoner”, a founder of the Natural Education movement who promoted the importance of fun in learning. “Mother Stoner” certainly practiced what she preached when it came to her own child. 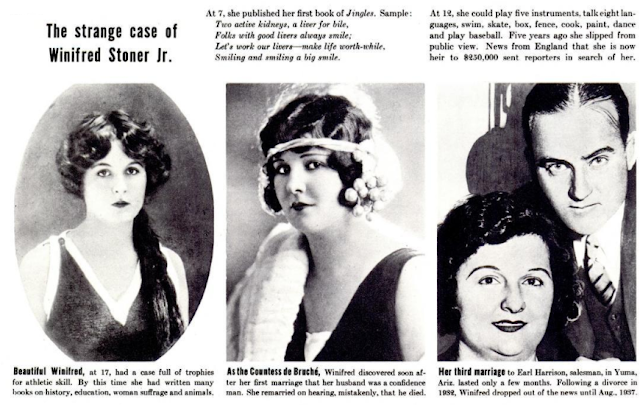 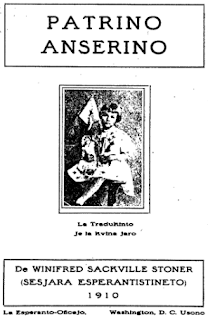 Winifred Jr could read and write capably at three, could use a typewriter at six (when she had an illustrated book of her poems published) and by eight had translated Mother Goose into Esperanto ("Patrino Anserino"). She was especially known for poems, rhymes and mnemonic jingles that aid in the recollection of information, and she hoped to replace Mother Goose with poems which weren’t an “evil influence” on infant minds, such as Simple Simon and Jack Be Nimble. She was in the American Who's Who before she turned 20, becoming the youngest person to achieve that dubious honour. 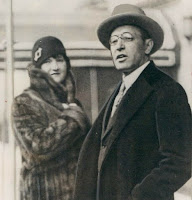 The year her mother was interviewed about the virtues of typewriter use, Winifred Jr was married in the first of her seven wedding ceremonies, this one in Greenwich, Connecticut. Her first husband, who at 35 was 16 years her senior, was a bogus French nobleman, Charles Philip Christian Bruch, who called himself Count Philip Clinton de Bruche (aka Count Robert Helmholtz). Winifred Jr was told he died in a car crash in Mexico City in 1922, and held funeral services for him in her home on Central Park West. She then married Louis Hyman in Greenwich in 1925 and divorced him in 1927. Two years later she was confronted at the Hotel Astoria in New York City by a very-much-alive Bruch, who had read of her engagement to Bainbridge Colby, a former US Secretary of State under President Woodrow Wilson, who was then 58 (she was still 26). Winifred had the Bruch marriage annulled and crossed out “divorced” in the 1930 US census and replaced it “widowed”. In 1931, Winifred wed Earl Winston Harrison (left) in Yuma, Arizona, and divorced him the next year. 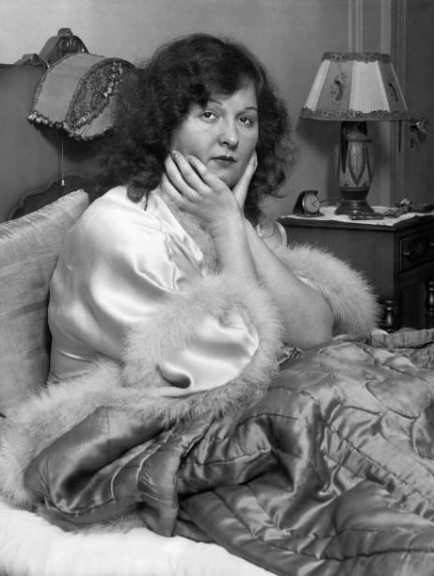 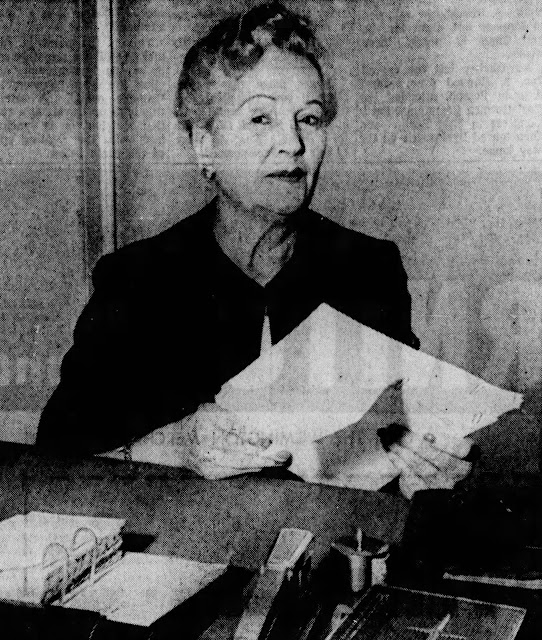 Winifred as Mrs Gillis in Wilmington, Delaware, in January 1963. 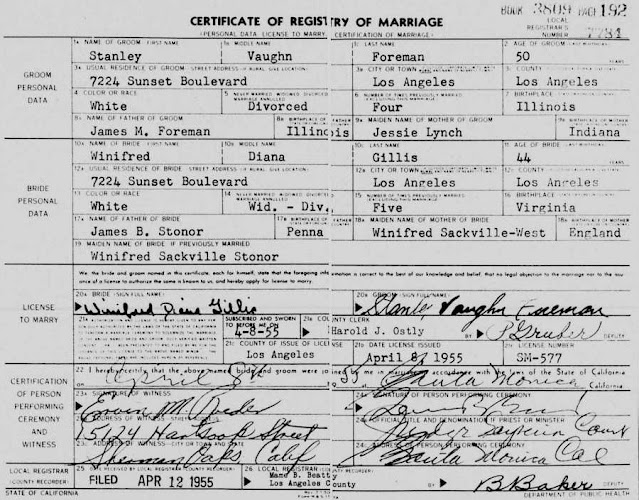 Winifred gave the marriage game a rest for 11 years, then in 1943 married Robert Lindsey Gillis. When she married Stanley Vaughn Foreman in Santa Monica, California, in April 1955, it was under two different surnames, Gillis and Stoner. She was Mrs Gillis in Tucson, Arizona, in February 1955 and again in Wilmington, Delaware, in 1963. In the latter year Winifred claimed Gillis had died in 1960, but in fact he died in 1971. In 1964 she married her last husband, Robert Emmett Seddon, in Wilmington. She died as Diane Seddon in Las Vegas on February 7, 1983, aged 80. Her fame as a child prodigy had continued to haunt her well into her 60s, and thereafter Winifred Sackville Stoner Jr decided to hide from the limelight as plain old Diane Seddon. Fame had become a piece of pottery she no longer cherished. 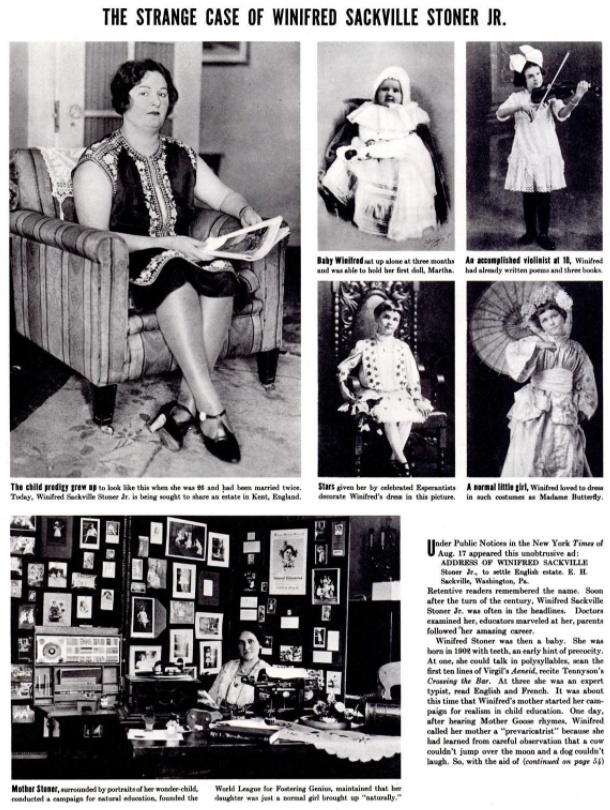 In her January 1963 interview with Dorothea T. Apgar, women’s editor of The News Journal in Wilmington, Winifred told a number of little white lies. She claimed, for example, that her mother, Winifred Sackville Stoner, was the daughter of a former British Ambassador to the United States. This could only mean Lionel Sackville-West, 2nd Baron Sackville, who was Envoy Extraordinary and Minister Plenipotentiary in Washington DC between 1881-88. Winifred Sr was actually born in South Strabane, Washington, Pennsylvania, in 1874, the daughter of English-born, John Cresswell Sackville (a real "Dr" but never "Sir" John). Like Winifred Jr, Winifred Snr had a tendency to play free and easy with the facts of her history. Not only, at her wedding, did she claim her father had been knighted, but in the 1910, after a court case in England regarding Lord Sackville’s seven illegitimate children, Winifred Sr claimed to have been born in England. Her real father had been living in Pennsylvania since at least 1870. Lord Sackville’s illegitimate children were all by Spanish dancer Josefa de la Oliva (née Durán y Ortega, known as Pepita). One of Lord Sackville’s grand-daughters by one of his illegitimate daughters was the English writer Vita Sackville-West. Vita's mother was Victoria Josefa Dolores Catalina Sackville-West, Lady Sackville, who had married her first cousin, Lionel Edward Sackville-West, the 3rd Baron Sackville. When Victoria died in 1936, American newspapers and magazines suggested Winifred Jr may have been in line to inherit a large fortune, which was not the case. On her sixth marriage certificate, in 1955, Winifred Jr claimed her mother's maiden surname was Sackville-West. 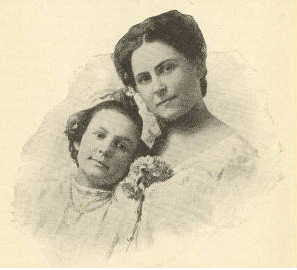 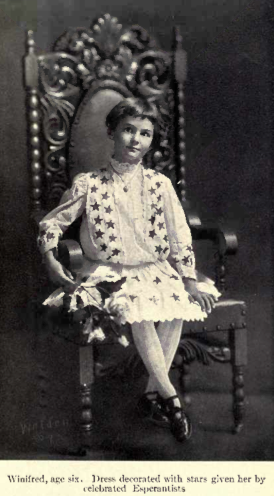 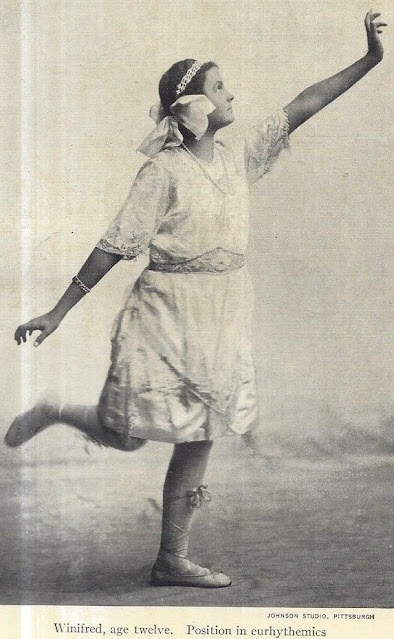 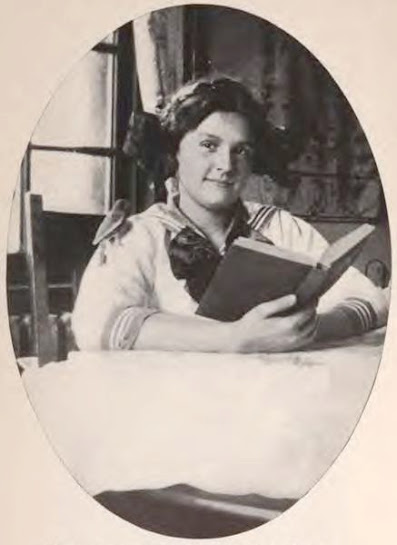 Winifred Sr married a doctor, James Buchanan Stoner, in Buffalo, New York, in 1909. He died in 1925, at which time his daughter was already a fading piece of her mother’s pottery. Winifred might have been multi-lingual, a young lady who could type poetry and manuscripts, play the violin and piano and win chess tournaments, but she hadn’t developed into what one may describe as a solid member of polite society. “Mother Stoner” believed learning should be fun and exciting and should appeal to all of the senses - which perhaps Winifred Jr took a little too literally. Winifred Sr's methods were published by the Bobbs-Merrill Company in Indianapolis in 1916 as Stoner's Manual of Natural Education. In the 1920s there was a monthly pamphlet, Mother Stoner's Bulletin, and in 1925 Winifred Sr founded the League for Fostering Genius. In 1927, mother and daughter set out on a “genius hunt” through the US and Western Europe. During Winifred’s Jr’s brief marriage to Harrison, Winifred Sr died of chronic nephritis (inflammation of the kidney) at her home at 418 Central Park West, Manhattan, on November 10, 1931, aged 57 (it’s interesting to note how inaccurate the Wikipedia entries for both these women are). 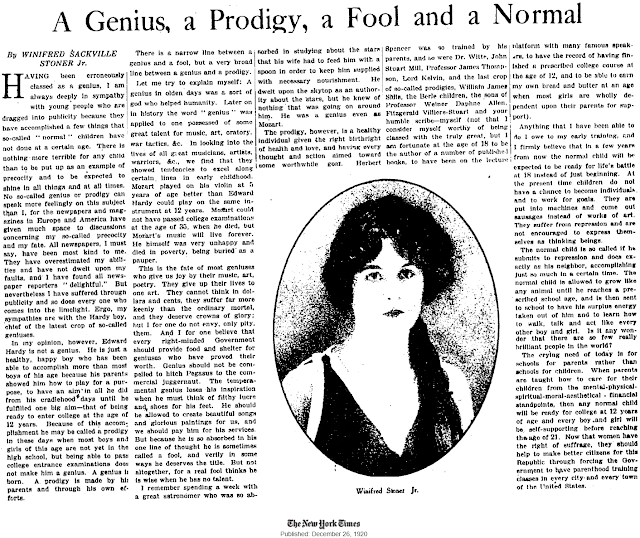 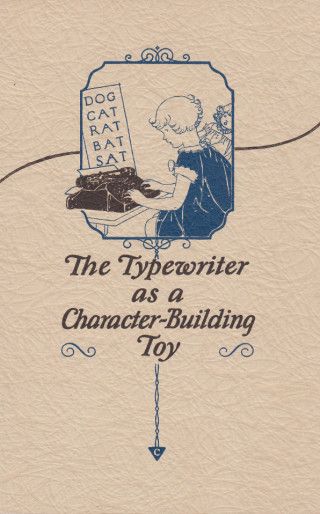 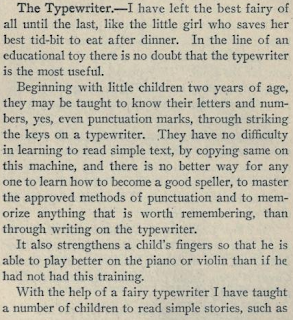 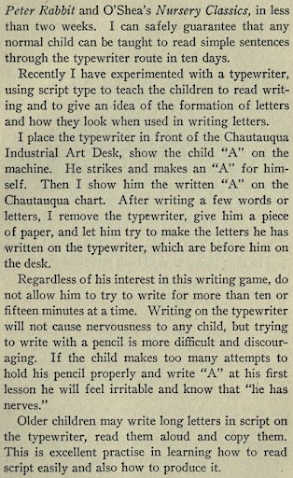 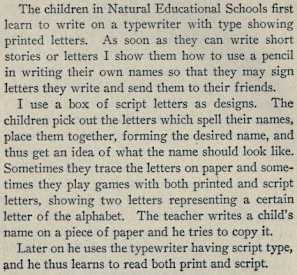 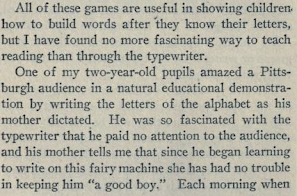 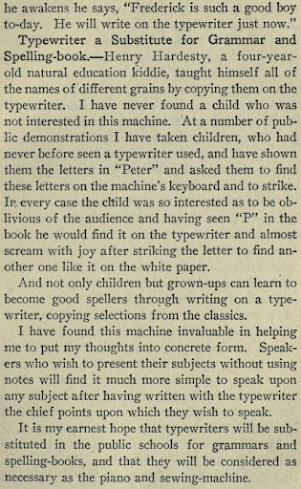 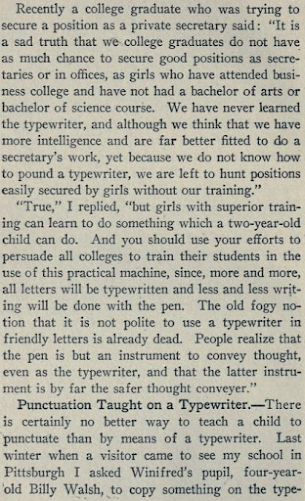 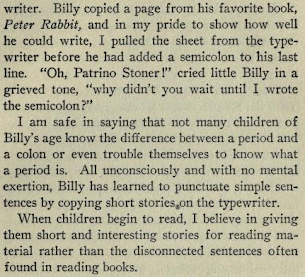 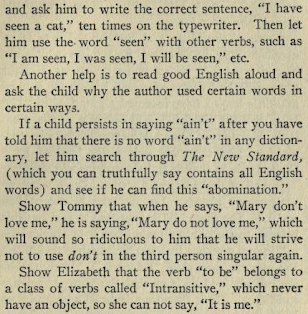 Posted by Robert Messenger at 16:20

Kids who are pushed early to become "prodigies" often end up warped for life.

Excellent advice. We should all have been given typewriters when young. Then she did not seem to turn out all that well.