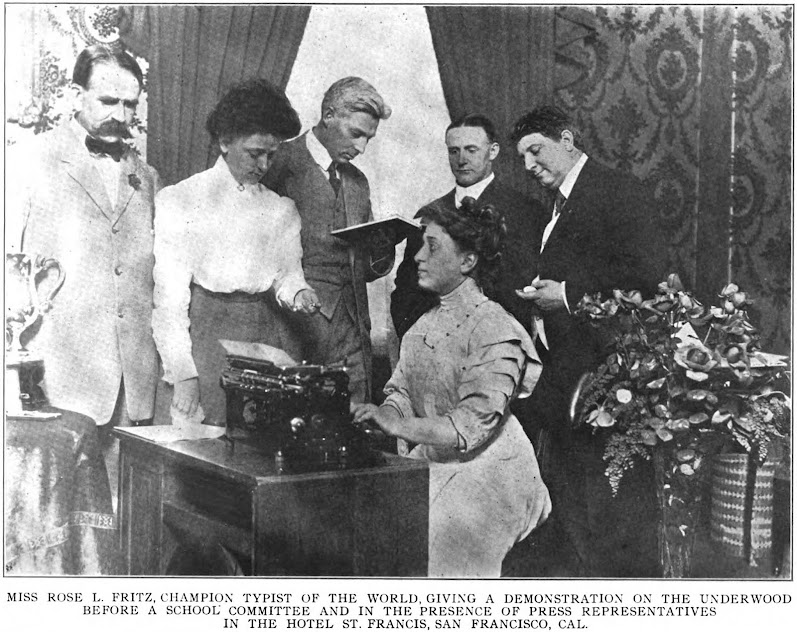 One of the cardinal sins of journalism, committed on a daily basis in modern print newspapers, is the publishing of photographs without complete and accurate captions. The Canberra Times does it with regular monotony. Mea culpa, I did it myself on this blog, almost eight years ago, when I posted on “Rose Louisa Fritz: World Champion Typist”. I used this image from the June 1909 issue of Typewriter Topics, leaving attached the original caption: “Miss Rose L. Fritz, champion typist of the world, giving a demonstration on the Underwood before a school committee and in the presence of Press representatives in the Hotel St Francis, San Francisco, California.” 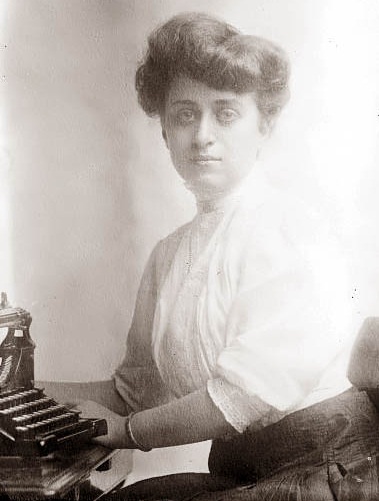 Thanks to many hours of deep research using primarily newspapers.com and ancestry.com, I am now able to complete the caption, with the exact date the photo was taken, and with the names of the other people standing around watching Fritz type. The date was May 10, 1909, a fact which heightens the esteem in which I hold Typewriter Topics, given it printed the halftone in New York just a couple of weeks later, albeit with an incomplete and inaccurate caption. 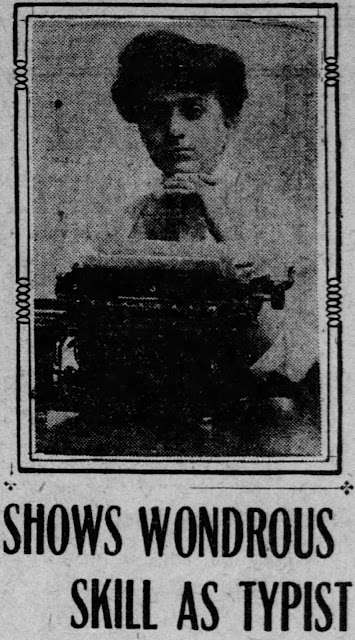 Under the headline "Shows Wondrous Skill As Typist", The San Francisco Call reported, “Her fingers maving [yes “maving”, yet another journalistic cardinal sin] over the keyboard of a typewriter with lightninglike [all one word] rapidity, Miss Rose L. Fritz, champion typist of the world, demonstrated before a professionally critical audience at the St Francis Hotel yesterday the ease with which she could reel off 182 words a minute.”

One hundred-and-eighty-two words a minute!  Wow! That is something. Surely only over a minute?

The Call went on, “This was only one portion of her exhibition. Blindfolded she drove her Underwood for 120 words a minute, and reading from unfamiliar copy, sent it spinning along at a rate of 132 words a minute. Inasmuch [one word] as the average of the professional typist is around 50 words a minute, the stenographers and typists gathered around were enthusiastic in their applause.” The Call went on to explain that Fritz was on a tour of the Pacific Coast, demonstrating with the same machine with which she had won her 1908 world crown. The newspaper said she had been unbeaten in 12 “brain racking” contests, presumably major championships. “The test opened with dictation. Under Miss Fritz’ manipulation, the machine faired hummed. ‘Faster,’ said she again and again, but even then it was discovered that she had been spinning along at 110 words a minute.”

Interestingly, The Call asked Fritz about her typewriter of choice. “Typewriters are like automobiles,” said Fritz. “Every owner is ready to swear that his make is the best. Personally I prefer the Underwood, for the sole reason that I found I could do better and faster work on it than on any other.”

The six people in the photo are, from left:

Marie Elizabeth Thede (with stopwatch), manager of the employment department for the Underwood Typewriter Company’s San Francisco offices at 133-135 Sutter Street. She was born in 1888 in Nebraska.

Charles Granderson Brown, Pacific Coast sales manager for Underwood. He was born in New York in 1865.

Fritz's signature
Rose Louisa Fritz, 21-year-old world champion typist, was born in New Haven, Connecticut, on October 6, 1887, the daughter of Simon Julius Fritz, a real estate broker, and his wife, Frieda. She won the first three official world speed typing championship titles, from 1907-09, setting a world record of 95 words per minute over 60 minutes in winning the 1909 event. (We still don’t know when and where she died, which itself is a crime against typewriter history.)

Willis Ervin Gibson, owner of the Oakland Polytechnic Business College on 12th and Harrison Streets.  He was born in Browning, Missouri, in 1870 and died in 1954 in Alameda, California.

Robert Vickers Dixon, manager of the Oakland branch of Heald’s Business College. He was born in  1875 in Kansas and died in 1948 in Alameda

The St Francis, now known as the Westin St Francis, is on Powell and Geary Streets on Union Square, San Francisco. The two 12-story south wings of the hotel were built in 1904, the year the hotel opened. The St Francis suffered fire damage after the 1906 earthquake and it re-opened in late 1907. 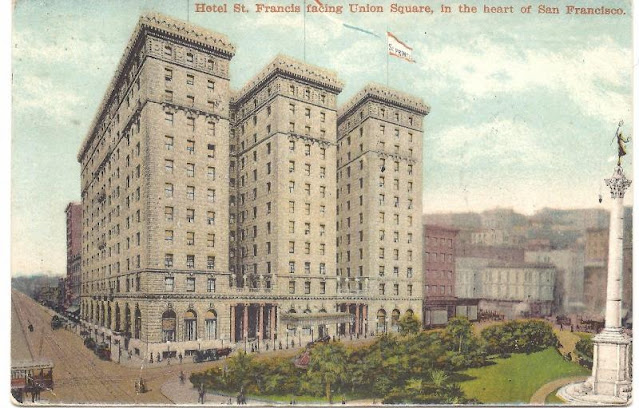 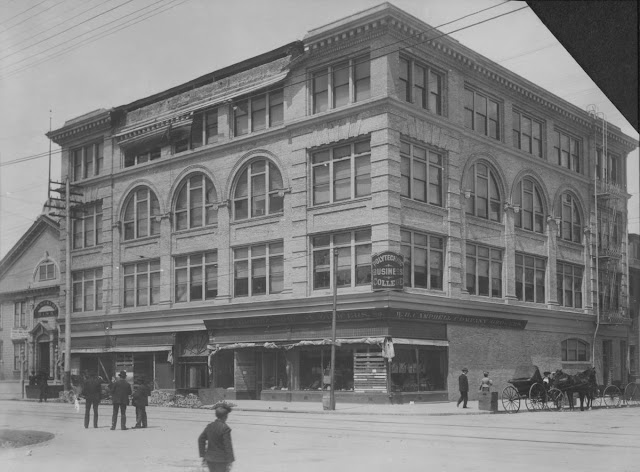 The Oakland Polytechnic Business College.
Posted by Robert Messenger at 14:13