Margin Release, and a Turning Point for ozTypewriter 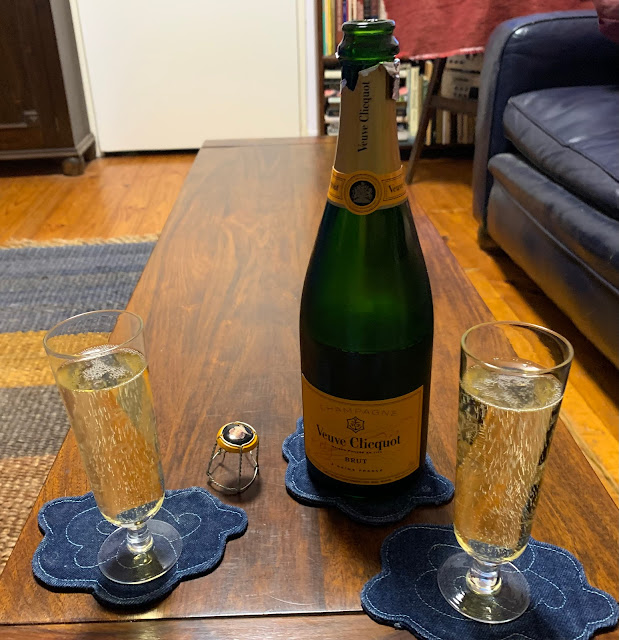 ozTypewriter reached five million page views at 8.22 last night, June 8, and to celebrate the milestone we popped the cork on a bottle of Veuve Clicquot. A bit extravagant? Well, it’s been a long slog, 2917 posts in more than 11 years. The five-million mark has been both a goal and a cut-off point for me for some time now. My original intention was to stop blogging altogether, but with encouraging comments from the like of Ted, Joe, Bill and Dave, I’ve decided to merely apply the brakes, pull over and idle for a while. It’s not exactly a hibernation, certainly not a complete closure, but just slow-down time. I may, as Ted suggested, decide to turn off comments, for no other reason than that between blogging and fixing typewriters, I never have enough time to respond to all comments, or reply to emails for that matter. Plus, if everything goes according to Hoyle, we should be doing a fair bit of travelling in the second half of 2022. 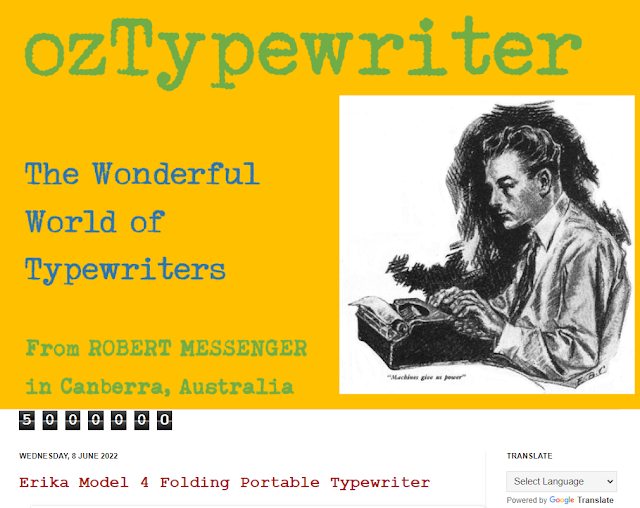 Yes, ozTypewriter has become a bit of a yoke around my neck, so the plan is to continue posting, but only occasionally, certainly not with the same regularity with which I’ve tried to post since the end of February 2011. Before reaching five million page views, I simply hadn’t been able to get to all the posts I had planned to write – there are probably 30 or 40 ideas still floating about in this study, all of which I still intend to get to one day before I die. For all that, I do wonder about the ongoing relevance of ozTypewriter – online interest in typewriters, as reflected in the various social media sites and platforms, has definitely changed considerably since I started blogging. Sometimes the page view numbers just straggled along and I found myself urging on this "turning point". Blogging began to feel a little like too much hard work for scant return. 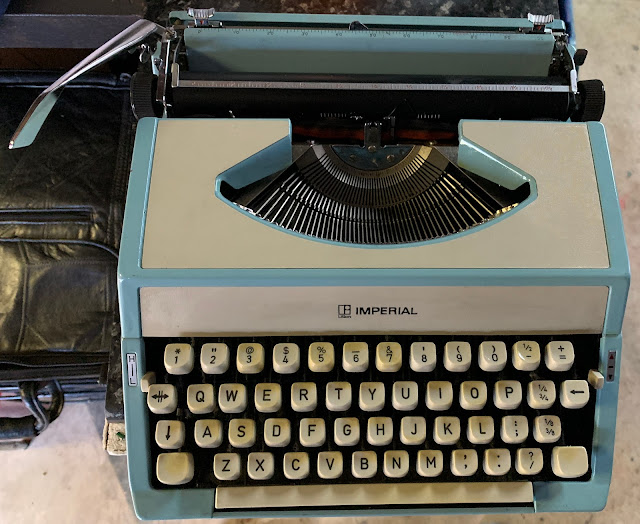 An unexpected part of yesterday's celebrations was to find this nice little Nakajima Litton Imperial portable typewriter in a Salvos store. We'd been clearing out things and donating stuff to the Salvos, when by chance I saw this Imperial hidden under a shelf. I can't remember the last time I found a typewriter at any op-shop in Canberra.
Anyway, enough of that … once I’ve recovered from last night’s celebrations I’ll start thinking about resuming posts and clearing the decks of typewriter history topics. There’s one post in particular I’ve been “getting to” for many weeks now, and it’s a bit of a “scoop” for ozTypewriter. In the meantime, we’ve just taking a bit of a break and will be back soon – although with nothing like the former ferocity
Posted by Robert Messenger at 10:23

Congratulations on 5 million! Enjoy your travels. Thanks for your great blog Robert, no matter how often you post.

Never say never! And I'm glad that you haven't. We will look forward to whatever you choose to post, whenever you do so.

Ah, the ways of mankind are strange indeed.

There is an entity calls itself supercarblondie, and has over ONE BILLION views on themtube. One assumes that level of views to bring some financial reward to the poster.

I would not piss on her if she was on fire.

The point in this diatribe is that although I cannot stand her, and all my close friends think her frightful, she has an overabundance of vapid fans, eager to gaze at her exploits with no regard as to her veracity. (She 'reviews' cars.)

All of the Really Great, Generous, Bright, Inquisitive, Thoughtful, Hard Working, Broad Minded, Wonderful people I have slowly gathered, your good self included, of course, have a Combined following of less than a Tenth of this osstralian bimbo.

And it makes me angry.

If one is incensed enough to post a Carefully Researched and Corroborated Corrective Comment, the fans hoist their flamethrowers and hurl insults and invective. No sign of anybody checking the facts, but Cult Behavior Rules.

But enough of my troubles.

You are Very Special, and Important. What you do is Extremely Valuable. There is no 'fame' nor 'fortune' in carefully investigated searching cross checking and analysis and extrapolation and collating building a framework and exemplary writing.

What you have done is beyond wonderful. It would be quite something if all the writing, and pictures, could be printed. A PDF would be a step in that direction, as even though 'theinternet' is a gigantic part of life now, it all relies on electricity and billions of buzzing computers. Nothing has lasted as well as books and bones.

Please don't feel pressured into Regular Deadline Posting. Remember that David Bowie always said:"My songs? I write 'em all for myself. I don't mind if people like 'em or hate 'em. It's ok if they do and I don't care if they don't."

Five million congrats on this achievement!

That's a lot of millions! Congrats, and please keep the roving type-reporting historical and actual presence alive on the interwebs. cheers rino