On This Day in Typewriter History (C) 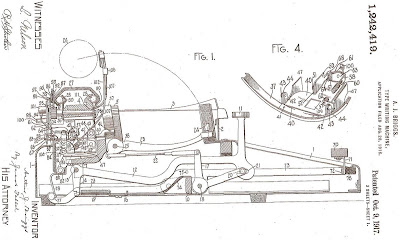 Remington, however, seems to have taken the same course of action with the Briggs design as Underwood had with Lee Spear Burridge’s brilliant little three-bank, designed in 1915. 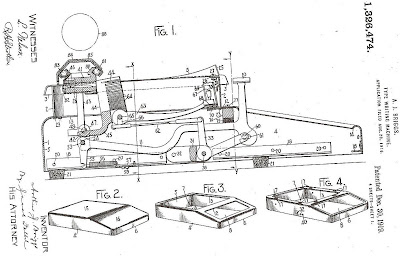 Remington held off with a first portable until after Underwood had eventually launched the Burridge design, in October 1919. Then Remington struck back with the Barr four-bank in October 1920. Barr had applied for his patent on May 21, 1918, and it was issued on October 28, 1919. 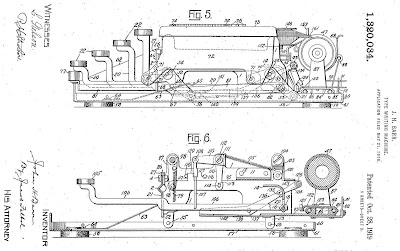 Quite why Remington had its two top mechanical engineers competing against each other, with separate portable designs at almost the same time, must forever remain a mystery, yet it is possible to surmise its line of thinking. 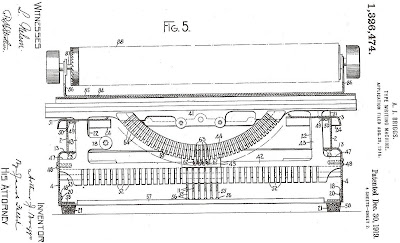 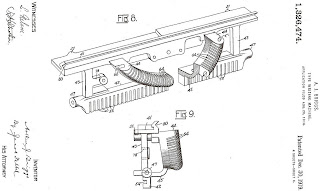 The patents tell us Briggs was aiming at a non-folding machine, not unlike Burridge's Underwood in profile, which was higher-set than Barr's. Briggs's machine had an inbedded typebasket. The front collar above the keyboard was there, Briggs said, to "assist in protecting and to some extent hiding the ends of the typebars and their pad". 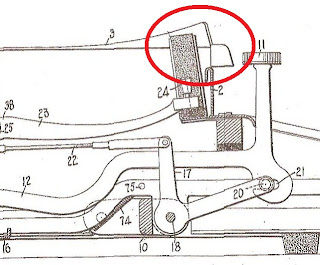 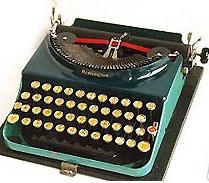 It's interesting that when Remington abandoned Barr's original concept, with the typebars lying flat then lifting into typing position, its updated model had just such a collar, albeit further back, around a slightly raised typebasket.
Briggs clearly got in first with his design, but to no avail. His efforts were in vain.

Let’s first look at how closely intertwined the careers of these two engineers were, at first Smith Premier and later Remington. And how, in typewriter terms, one was to eventually outlast the other.

Both Briggs and Barr were 42 when recruited by Brown (above), both highly qualified engineers, and both were to make hugely significant contributions to the development of the typewriter in the first quarter of the 20th century. Both worked with Brown on the Smith-Premier, and the two developed each other’s designs at Remington. 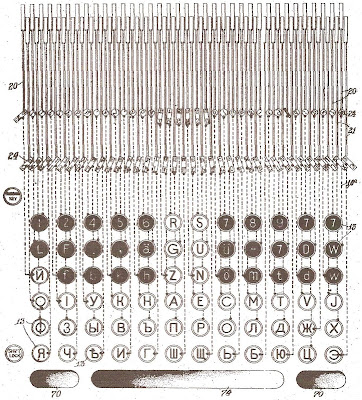 This is a multi-language keyboard Barr designed for Remington in 1916,  in doing so giving acknowledgement to Briggs's work on the Smith-Premier No 10 84-key keyboard
Barr was originally from Terre Haute, Indiana, and Briggs, born in London, England, moved to Syracuse from Allegheny, Pennsylvania.
Briggs and Barr joined Brown soon after George Frederic Stillman (below) left Smith-Premier because of his failing health (he died in late 1906). Brown and Stillman had worked together on the first Smith-Premier typewriter, in 1888-1889, and Stillman acted as assistant superintendent to Brown at Syracuse and was Smith Premier’s consulting engineer when he retired.

As well, Carl Gustav Gabrielson (born Sweden, 1869), along with the Smiths, had left the overriding trust, the Union Writing Machine Company (of which Smith Premier remained a part), to be chief engineer of the Smiths’ new company, L. C. Smith and Brothers.

With Gabrielson (above) in toe, the Smith brothers, keen to make visible-writing machines, had cut themselves loose from the trust, leaving the Smith Premier company and Smith-Premier brand name behind them to once more independently develop their own typewriters, under a new banner.

The loss of Stillman and Gabrielson left two gaping holes at the head of the Union machine designing team, and Brown needed two able men to fill the positions.

Barr was a professor of mechanical engineering and machine design at Cornell University, so his credentials were fairly obvious. He was appointed a Smith Premier company director and succeeded Stillman as factory manager at Syracuse.
Brown had noted Briggs’s abilities when Briggs applied for a telephone-receiver holder patent while living in Allegheny in 1902. Brown had a special interest in this area. He had designed an automatic switchboard that allowed for a "change from manual transmission of calls to a dial phone system" and which eventually led to the rotary dial phone. Brown sold the patent to the Strombert-Carlson Company.

Brown was, of course, involved in many and varied ventures, including guns (also with the Smiths), tires (also with Stillman), bicycles and cars.

As for typewriters, the resignation of the Smith brothers from the Union trust on January 27, 1903, would have caused Brown much heartache. On the one hand, he had reason to feel a great sense of loyalty to the Smiths. It was Wilbert Lewis Smith (below), after all, who had given Brown his start with typewriters, at Lyman Cornelius Smith's gun company factory.

On the other hand, there were family ties – Brown was married into the Seamans family of Cortland: his wife was a cousin of Clarence Walker Seamans (below). Brown chose to stay with Union, a decision which the Smiths apparently fully accepted.

The Union Writing Machine Company had been formed under the presidency of Seamans in 1893. Seamans had joined E. Remington and Sons as a 15-year-old clerk in 1869 – his father, Abner Clark Seamans, was a purchasing agent there. In 1878, Seamans became a bookkeeper and salesman at Fairbanks and Company, a scale manufacturer which was at the time marketer of Remington typewriters.

In 1881, Remington itself took over the marketing. Seamans was retained and made manager of sales. On August 1 the following year, Seamans’ partnership with Henry Harper Benedict (above), a Remington director, and William Ozmun Wyckoff, a Remington sales agent (below), took on the selling of Remingtons.

In 1886, Wyckoff, Seamans and Benedict purchased the entire typewriter business from Remington and, in 1892, formed the Remington Standard Typewriter Company, with Seamans as treasurer and general manager.

Remington, Smith Premier, Yost, Densmore, Brooks and the American Writing Machine Company merged the following year as the Union company in an effort to stymie the advance of the Wagner visible-writing typewriter, which had emerged in 1893 and which Underwood was to take on in 1896.
After a decade of turning a blind eye to visible-writing machines, the years between 1903 and 1909 were a time of great change for the Smith Premier and for the Union trust.

When the trust changed its name to the Union Typewriter Company, in 1908, it embarked on a period of consolidation, and John Henry Barr took on a new position, as consulting engineer to the trust itself.
At this time, Union began to produce new visible-writing models of the Smith-Premier, Remington and Yost. Brown, Briggs and Barr all worked on these machines. 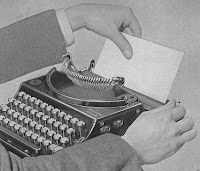 When Union became the Remington Typewriter Company in 1913 (with Brown as a director), Barr became a Remington consultant, and continued to serve that company for another 10 years, before leaving to make his own typewriter.
Arthur Briggs followed Barr each step of the way through Barr's Smith Premier-Remington progression.

Just as the Union was fading into history and Remington was re-emerging in its own name and own right, a new market was opening up for typewriters: the lightweight, compact portable. The enormous success of the Corona 3 from 1912 to 1919 naturally led other manufacturers to took at developing their own portables: Fox was the first to move, in November 1917, but given the Baby Fox’s likeness to the Corona, this only led to ultimately crippling court action. 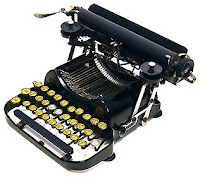 Underwood had been sitting on Lee Spear Burridge’s design for the wonderful Underwood three-bank since 1915, and finally took the plunge in November 1919.

No sooner had it done so than Remington, with the revolutionary John Henry Barr design, went into production planning for a four-bank portable with the folding typebars.

The Remington was launched in October 1920, and within three months Edward Bernard Hess and Lewis Cary Myers applied for a patent for what, in 1926, was to become Royal’s successful answer to the challenge.
While all this was going on, Barr and Briggs were working together and yet apart at Remington. Briggs had also been set to design a portable, but Remington held back on his invention – it most likely believed that the Corona and the Underwood three-banks had set a trend and established compactibility as the major selling issue.

When Barr left Remington, so too did Briggs. Briggs continued to develop a bobbinless sewing machine and worked with various metal and iron companies on mechanical designs until 1930. 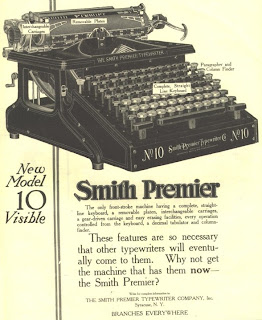 Among Briggs’s 43 patents were 21 for typewriters, assigned to Brown, Smith Premier or Remington. These included typebars, ribbon colour indicators and ribbon vibrators, escapements, carriage and paper feeds, line locks, platen clutches, case shift, margin stop and dead key mechanisms, carriage supports and type action, as well something called "condensed record work". He worked with Brown on the ribbon mechanism of the Smith-Premier and with Barr on the front-strike, visible Smith-Premier.

For all this effort, Briggs won no lasting recognition. The names of Brown and Barr live on, but not that of Briggs. 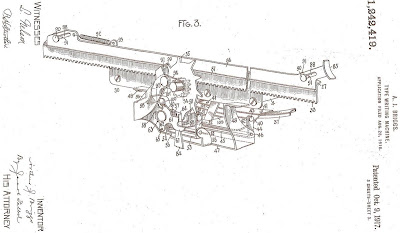 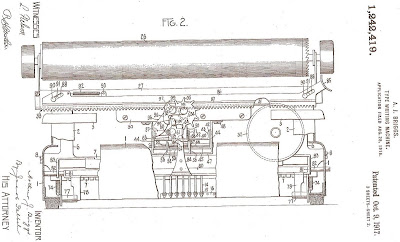 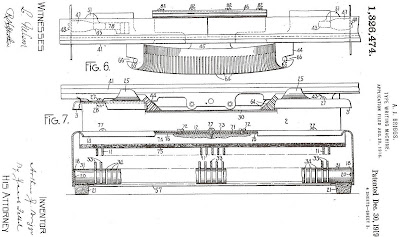 Robert, you have written an incredible story. This might lead to helping me figure out where my "small Briggs model" from OHA fits into this evolution.

Congrats on reaching numeral C!
This one and the next remind me of the 1980's tv show, "Connections."
I enjoy reading how connected everything is to each other.

Mr. Messenger is quite the James Burke of typewriter history! (: