On This Day in Typewriter History (XCIX)

AUGUST 27
SHOLES AND GLIDDEN
IS LAID TO REST 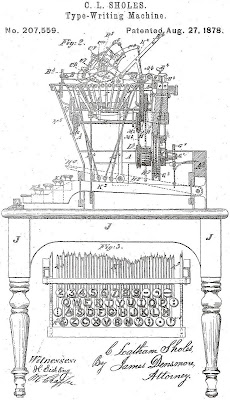 On this day in 1878, James Densmore received the last two Christopher Latham Sholes patents for the Sholes and Glidden typewriter. 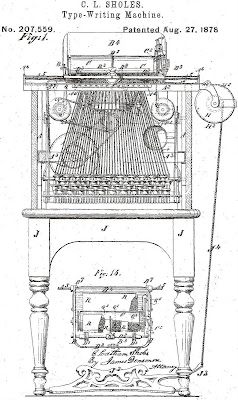 From The Typewriter and The Men Who Made It, by Richard N. Current (1954)
One (above) was for what was described as the “axle” machine, which Sholes called his “new departure” from the 1872 design, and which he started to develop in 1869. In consultation with Densmore, Sholes had decided to exclude Carlos Glidden (below) from this advance from the original Sholes and Glidden, and Samuel Willard Soulé had declined to contribute anything to the work. Nonetheless, Glidden, who still held an investment in the enterprise, did assist Sholes during 1870-72. Glidden died in 1877, before these last patents were issued. It had been agreed that as a "bystander" giving advice, he had held no rights on them, anyway.

The other patent issued on this day in 1878 was for the “continuous roll” machine which E. Remington and Sons were at that time still manufacturing at Ilion in New York. 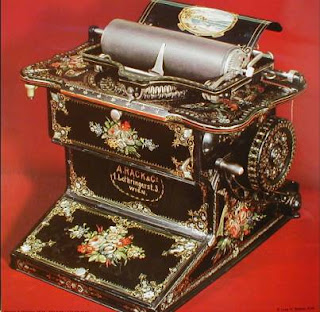 Sholes himself had by then almost washed his hands of his invention. From September 1874, he had owned only a one-tenth share in the still then loose-knit undertaking, which had become largely controlled by James Densmore (below) and his brother Amos, and by George Washington Newton Yost. 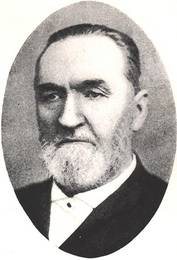 By the end of 1878, when Remington stopped production of the Sholes and Glidden, Sholes (below) should by rights have received at least $4000 in $1 a machine patent royalties for typewriters sold alone – that’s not counting the large sums of money he was owed by James Densmore and Yost. But he had seen just a fraction of this. 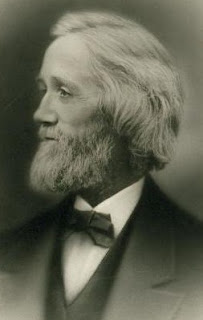 These were not to be the last Sholes patents – he was still working on his portable, with which he was famously photographed. 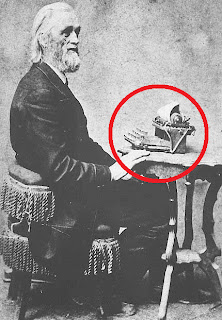 At the time James Densmore received these 1878 patents, Sholes was just back in Milwaukee after two visits to Pikes Peak, Manitou, Colorado, where he had hoped to recover from various ailments which had been affecting his health in the chilly Milwaukee winters. He had suffered a relapse in July 1878, but regained strength on his return home. 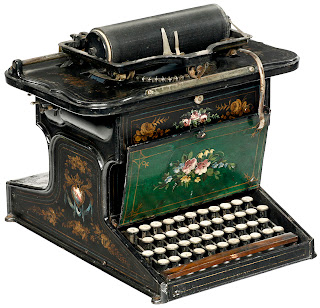 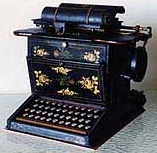 The Type-writer Company was incorporated by James and his brother Amos Densmore on December 28, 1874, with Yost as the third partner. James Densmore and Yost owned two-fifths each and Amos Densmore one.
The company continued to own the basic inventions embodied in the machine Remington was making, but on November 1, 1875, it also signed over the rights to sell as well as make the machine to Remington.
At that stage the Type-Writer Company was in dire financial straits, with a balance sheet $8.23 in arrears. 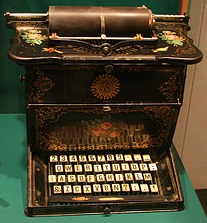 In the quarter to January 1876, Remington sold 1142 typewriters, of which $15 a machine, or $17,130 in total, was due to the Type-Writer Company. Yet the Type-Writer Company only received $599.66 of this, after royalties ($1 a machine each to Sholes, Glidden and Charles Ames Washburn (below), who held a patent on the longitudinal movement of the platen, and 50c a machine to Remington’s own mechanical engineer Jefferson Moody Clough) had been deducted along with a set contribution to offset massive debts ($3 a machine owed by Yost).

Remington then started to put the squeeze well and truly on to the Type-Writer Company, by more than doubling the amount it withheld because of the $20,000 in typewriters it had credited Yost for him to sell. Yost (below) had also borrowed $50,000 from Remington to buy out Amos Densmore’s one-fifth share in the Type-Writer Company and become its majority shareholder.

Relations between all parties deteriorated even further in March 1877 when James Densmore convinced Sholes to demonstrate his portable to Remington. Remington was impressed, but Philo Remington (below)immediately started to ask some pertinent questions about his company's rights to the patent for the portable (which it was subsequently able to lever away from Sholes and Densmore anyway). If the portable was to be deemed a Type-Writer Company project, did Remington not already own the rights to it? James Densmore, by then under intense financial strain and looking at the portable to ease his monetary problems, was infuriated by the suggestion. Sholes naturally demanded that he and Densmore sever all ties with Remington.

Yost and Densmore began to look at the possibility of selling the Type-Writer Company’s stock. But first Densmore had to confirm the company’s property by completing the job of patenting all the Sholes inventions the company owned. At that time, the last patents applied for and issued, in 1871, were for the original Sholes and Glidden as we know it. With the remaining Sholes designs for this machine (below), Densmore had held back, as far as was feasible into the 17-year protection period offered by the first patents. 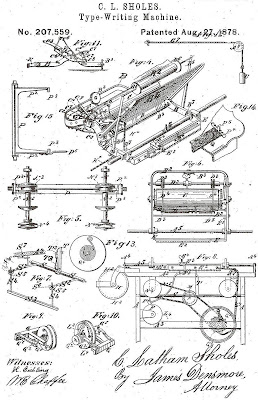 During the winter of 1877-78, the US Patent Office put pressure on Densmore, on the grounds that the delays he was causing with the pending patents were creating “interference” to other typewriter inventors, such as Lucien Stephen Crandall and James Bartlett Hammond. Defending these charges only added to Densmore’s monetary woes. 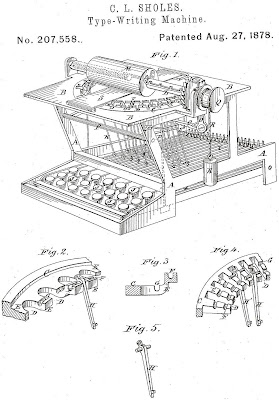 Finally, on August 28, 1878, Densmore gave in. The result are these Sholes patents we see here (above). Both are assigned to the Type-Writer Company of New York. The first, 207,559, had been filed on March 8, 1875, while the Type-Writer Company still held the right to sell the Sholes and Glidden. It was witnessed by James and Amos Densmore, with James Densmore acting as Sholes's attorney. The second, 207,558, was applied for on March 27, 1878.
James Densmore may well have been banking on Remington continuing to make the Sholes and Glidden into the foreseeable future, while incorporating improvements. It would have been his best chance of recouping some of his considerable outlays over the preceding 10 years. But of course Remington had other ideas.
With Byron Alden Brooks's shift device (for which Remington also had to pay royalties) and further work from Clough and William McKendree Jenne, the Remington 2 was introduced in late 1878. William Ozmun Wyckoff, Clarence Walker Seamans and Henry Harper Benedict were to take over marketing and selling. From that point on, the typewriter world did not look back, not even to the Sholes and Glidden.
Densmore's time had pretty much passed. So had Sholes's, despite his portable. But Yost had yet more tricks up his sleeve. 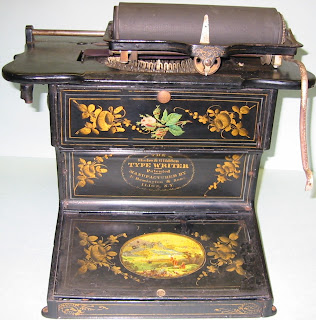 Thanks for further insights galore.

That S&G sold in Vienna must be the fanciest one I've seen.

Would you tell me how you have known that the S&G sold in Vienna?

I know there is the Sholes' ( without &G) type-writer on the catalog.
What at Vienna in 1873． - The actuality on - QWERTY history:

Hello, Richard.
I misunderstood your comment.
You may have said about things on current.